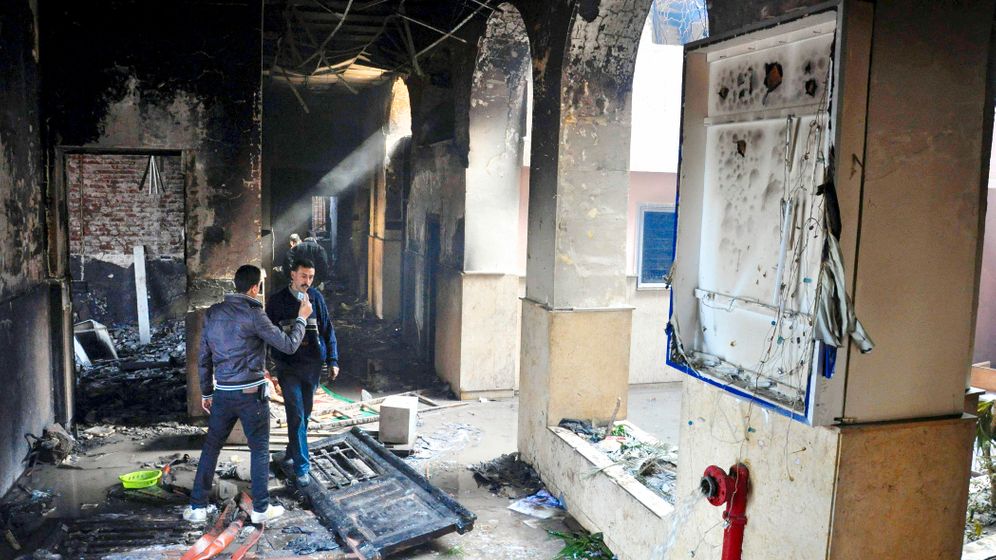 There are revolutions that smell like jasmine, but not this one. There are revolutions where people celebrate what they've accomplished and are so happy that they can only repeat the word "crazy" in stunned disbelief, like when the Berlin Wall fell in 1989. The revolution in Alexandria isn't one of these either. Instead, the revolution here reeks of growing piles of garbage, and it sounds like the sticks the revolutionaries beat upon the empty pavement to bolster their courage.

For days, Alexandria's four million inhabitants have been living without a state. Near Alexandria Stadium, a young man in a hoodie pulls a board studded with nails into the street to stop cars. What looks like a 15-year-old boy with a hockey stick resting on his shoulder helps him out. Others have steel rods, pipes and machetes. They have now tasted what it feels like to have power.

The police station behind the stadium in the Bab Sharqi (or "eastern gate") district of the city has been burnt down. Torched personnel carriers once belonging to elite police units are now lying on the street surrounded by soaked bundles of files and drawers.

An old man with a book on his knees is sitting in the midst of this debris. He is Mahmoud Roshdy, a retired professor of cybernetics. He and a friend hastily cleared some space in the hallway and stuck a piece of paper on the wall with packaging tape that reads: "Public Committee for Citizens' Issues."

For now, Roshdy is the state. "If someone is missing their car, where should they go?" he asks. "There are no longer any public offices here or any police." Given these circumstances, Rushdi decided to step in for the authorities. He logs all the reports, notifications and complaints in his book, which he will take to the military outposts later on.

Roshdy says that the people must learn that the police are not only responsible for tear gas and bribes. "The military has promised not to shoot. Good. But it's also not shooting at Mubarak," Rushdi adds. "So the mood is subdued. Our revolution hasn't experienced its moment of joy yet. The Bastille is still standing."

People come to visit the Bab Sharqi police station to take pictures of the ruins and of themselves standing in front of them. All of a sudden, a stout man wearing sunglasses jumps out of his car and yells: "What's going on here?" before laying into the elderly men. "You traitors! You spies!" he shouts, beside himself with rage because foreigners are being shown the humiliation of the state authority. The man cannot be calmed down. When he starts throwing punches, the shoulder holster peeks out from under his leather jacket. The bystanders just look on.

The Bastille might still be standing, but the counter-revolution has already begun. The revolution in Alexandria skipped a few stages: the rapture, the feeling of airy anticipation of empowerment, the carnival.

There are only a few people on the streets and hardly any women. The people are in hiding, as if it were somehow too eerie to be left to their own devices. Only the yellow-and-black Lada taxis continue to race through the run-down streets of the old town as they always have -- like a roused swarm of wasps.

Not far from the main railway station, two archaeologists are standing guard in front of the Roman amphitheater. They have hidden two police cars on the site behind Corinthian columns to protect them from the popular rage. They ask for no photographs to be taken, saying: "Things are chaotic here. So you have to follow the rules." Across the way, a man covered in filth is squatting on the street and sorting through the garbage around him as contentedly as a young boy with his pieces of Lego.

'The Brain of Egypt '

There are families living in the streets of the old city who can only afford to eat once a day. Radi Atalla Iskandir says that the rage is understandable. The Anglican minister is standing on the roof of his rectory, looking down on the groups of people carrying homemade placards while making their way to the square outside the train station for another day of rage. The minister feels uneasy about what's happening. From up here, you can gaze out over almost the entire city. You can see the residences of the patriarchs and the archbishop as well as the rooftop restaurant of the Hotel Cecil, which used to be frequented by the singer Umm Kulthum, the poet Constantine Cavafy and the writers Lawrence Durrell and Giuseppe Ungaretti.

Alexandria was once "the brain of Egypt," Iskandir says, the "first city of the eastern Mediterranean." And yet, in history, it has always been too early or too late. "We have lived here for almost 2,000 years," he says. "Under Nasser, we Christians lost our property. Under Sadat, we were stripped of our right to do business. Under Mubarak, they have burned our churches." He stops there with his train of thought.

Iskandir feels uneasy these days when he goes out to the Corniche, the city's long coastal road, and sees a pick-up truck drive by with its bed packed with young men shouting "Allahu akbar!" Iskandir wrote his doctoral dissertation of the "rebirth" of Islam. He knows the members of the Muslim Brotherhood in his neighborhood. He says that they no longer have beards, "but they have their plan."

Unlike in Cairo, the Muslim Brotherhood has come to assume a leading role in the protests in Alexandria. In other places, regime opponents might be organizing themselves via Facebook. But, in Alexandria, every demonstration starts on the front stairs of the Qaed Ibrahim Mosque in a somewhat more traditional way: with bullhorns and crowds of people chanting "Enough!"

The BMW and Mercedes dealerships on the road leading to the airport have been plundered, as well as the Carrefour hypermarket. Rumor has it that a police officer was tied up and dragged behind a car all the way to the Italian Cultural Institute.

Opening a Window to Freedom

The days of rage have pushed open a window to freedom, and the people have been able to look out of it. Not everyone has been pleased with what they've seen. One man sitting in the small street-side cafe "Sultan," who only gives his name as "Monsieur Robert," would like to see that window quickly shut. "Egyptians need order," he says. "Freedom is not enough." Monsieur Robert is your classic Alexandrian: a Christian whose family came here ages ago from the Levant, fluent in five languages and a chain smoker with the build of a Giacometti sculpture, almost too lean to even cast a shadow.

Monsieur Robert, who used to manage the local Kuwait Airways office, also hates the regime's stupidity, including the ministers who protect their vested rights and the obscene wealth of the Egyptian upper class, which can't even muster the decency to build houses or hospitals for the poor. "A liter of milk costs 6 Egyptian pounds, and the average salary is maybe 300 pounds. How is that supposed to work?" he asks. Every year, there are only new promises. "The demands are justified," he says, "but now we have anarchy." And that makes him nervous.

The fiercest battles have been fought right where he lives, on Sheik Ibrahim Street. When the police fled, the concierges of the houses formed a "national guard." Though their opinions might differ, they man the posts together. Mahmud does it for the revolution, but Ahmed -- who has actually found the president and his "30 years of peace" rather good -- does it because he's afraid of looters. They have written the name of their street on white clothes tied around their upper arms. They've organized a phone chain and emergency numbers. From night to night, their supply of arms has gotten progressively better. One insurance broker shows off his stun gun.

At around 11 p.m., the sea lying beyond the wall of the coastal road is a dark, slowly pulsating emptiness. Some demonstrators approach us. One elderly man, still intoxicated by the day's activities, calls out to Monsieur Robert: "I am a martyr. I intend to die for freedom." To which Robert responds: "OK, do what you want. But not here on our street."

Then they continue on their way. In a voice above a whisper, the insurance broker says: "We need another revolution to save this country." There are revolutions that smell like jasmine. And there are revolutions where the people involved know each other too well to allow themselves to celebrate their freedom.

The Library of Alexandria, the most famous of the ancient world, was burnt down when Julius Caesar captured the city in 48 BC. Standing in its place since 2002 is the "Bibliotheca Alexandrina," which faces the sea like a large tilted disk.

Over the years, the institution has hosted workshops and lectures on democracy, reforms and religion. In one room, there is a copy of Salman Rushdie's "Satanic Verses." In March 2004, Arab intellectuals and civil society institutions composed the "Alexandria Declaration" here, a sort of "Charter 77" for reform in the Arab world. While police stations were being burnt down and the court buildings and the governor's residence were stormed, students formed a protective chain in front of their library. They don't want to see another fire destroy their written treasures.

"It's a wonderful moment," says Ismail Serageldin, the library's director and one of Egypt's leading intellectuals, breaking the complete silence in his office. Serageldin holds 30 honorary degrees and a professorship at the "Collège de France," the Pantheon of intellectual life in France. Despite everything that's happening, Serageldin is still convinced this revolution will reach its goal.

"Victor Hugo once wrote: 'No one can resist an idea whose time has come,'" Serageldin says. "Everything you are seeing -- the fighting, the looting -- are merely ripples on the surface."

A Triangle of Power

Instead, Serageldin says, the real issue is the deep undercurrents -- and these are being driven by the secular youth. "In Egypt," he explains, "there is a triangle of power: the Islamists, the statists of the Ancien Régime and us, the liberals. And we will win." Serageldin doesn't view the current uprising as being part of Islamist movement. "Don't worry," he says. "The times when Arab rulers could treat their people like naughty children are over."

Serageldin then goes into the library's conference room to look out the window upon the square where legend holds that Alexander the Great ordered the city to be founded. Hanging in the room is a tapestry bearing the face of the president. "After all," Serageldin says by way of explanation, "Mubarak made this library possible, and his wife chairs our board of trustees. But take a look at this."

Serageldin presses a switch, and a screen comes down in front of the tapestry -- covering first the hair and then the eyes, mouth and chin of Egypt's ruler. Then Serageldin hits the switch again and the screen goes back up so that the "raïs" or president is visible once more.

When you live in a port city, you know just how deceptive the ripples and currents can be.