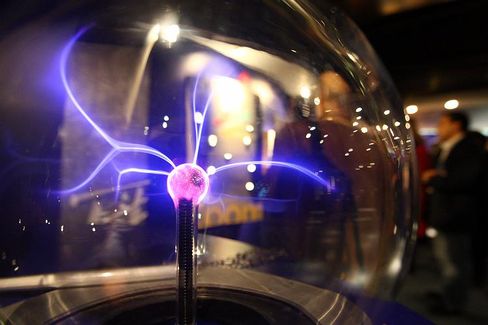 A photon source at CERN in Switzerland.

The video looks a bit like a scene from a low-budget sci-fi horror film. A tiny hole slowly begins sucking in bits of the Earth in Switzerland with mountains, lakes and cities quickly falling into the growing gap. And it just keeps on growing -- and growing. By the end of the 38 second movie, the entire planet has been swallowed up -- and all that's left is a shimmering ring in the inky blackness of outer space.

Absurd, perhaps. But a brief look around Internet blogs, and especially YouTube, makes it clear that there are a number of people out there who believe it is a very real possibility. The gigantic particle accelerator just now being completed outside Geneva at the European Organization for Nuclear Research -- known as CERN -- is set to be switched on soon. And some are concerned that, once the research facility begins bashing subatomic particles together at 99.999991 percent of the speed of light, dangerous black holes could be created and spread out of control.

The fear has spread fast and far in cyberspace. In addition, a scientist at the University of Tübingen, Dr. Otto E. Rössler, has lent a certain amount of academic weight to the skepticism. So much so that a group of German physicists has now published an open letter carrying assurances that the particle accelerator, known as the Large Hadron Collider (LHC), is in fact safe.

"There is no way that the LHC will produce black holes capable of swallowing up the Earth," reads the letter from the Committee for Elementary Particle Physics (KET), a group of leading quantum physicists in Germany. "This claim is based on extremely well tested theories of physics and on observations of the cosmos."

The head of KET, Dr. Peter Mättig, a particle physicist with the University of Wuppertal, concedes that disaster theories have not made much headway in the general public. "I don't think there are many who believe it," he told SPIEGEL ONLINE. "But it is notable how often we have been asked about the problem. And we especially want to refute those, like Dr. Rössler, who try to use science to back up their claims."

KET argues that those concerned about a tiny black hole growing into a large black hole fundamentally misunderstand well-established rules of quantum physics. For one, mini-black holes, the KET Web site assures its readers, would be just one billionth of a billionth of a gram in weight and would be extremely unstable. Indeed, according to a theory developed by the famous physicist Stephen Hawking, they would vanish almost instantaneously -- a phenomenon known as Hawking radiation. Anyone who says otherwise, KET says, doesn't completely get Albert Einstein's General Theory of Relativity.

Still, no one is denying that some physicists are hoping the Large Hadron Collider will allow them to observe, however briefly, the creation of these -- so far theoretical -- tiny black holes. One of the goals of the €4.8 billion ($8 billion) project is to create conditions very much like those in the first milliseconds of the universe's existence -- right at the beginning of the Big Bang.

By doing so, those who ascribe to string theory -- a mathematical construct seen by many as a possible means of unifying quantum mechanics with general relativity (the so-called "theory of everything") -- hope to find physical proof of an idea which has until now been little more than an exercise in theoretical physics. String theory predicts the existence of a number of dimensions beyond the four we are aware of, as well as a number of ultra-tiny particles and anti-particles that have not yet been observed.

Because the Large Hadron Collider, 27 kilometers in circumference and vastly powerful, is so much larger than any particle accelerator ever built, some see it as the best chance yet to find those particles or those dimensions.

But string theory is not the only unproven physics theory out there. Hawking radiation has likewise proven a tough nut to crack. Even as the complex formulae used to back up the theory point to a phenomenon of black holes emitting invisible radiation -- a necessity if any mini-black holes created by CERN are to dissipate -- that radiation has never been observed. If it doesn't exist, say those concerned about a Large Hadron disaster, there is little to stop mini-black holes from growing. And growing. And growing.

Indeed, a law suit was even filed in a district court in Hawaii in March in an effort to delay the opening of the Large Hadron Collider. According to the New York Times, Walter L. Wagner and Luis Sancho contended that CERN hadn't done enough to examine the potential dangers. The lawsuit mentions black holes as well as "strangelets," a potential by-product predicted by some physics theories that, they say, could transform the Earth into a lump of uninhabitable "strange matter."

Some scientists have also wondered aloud just how much risk we should be willing to accept when it comes to scientific experiments such as those being conducted at CERN. Even if the chance of things going wrong is infinitesimally small, they say, the potential disaster is unimaginably large. The question, "'how improbable does a catastrophe have to be to justify proceeding with an experiment?' seems never to have been seriously examined," wrote University of Cambridge physicist Adrian Kent in a 2003 paper.

CERN, for its part, recently published a new report from the LHC Safety Assessment Group in which it the risk of microscopic black holes is played down. While the report admits the remote theoretical possibility of such black holes, elsewhere on the site, a page titled "The Safety of the LHC" says "it is impossible for microscopic black holes to be produced at the LHC." The safety site also said that, were they created, they would disappear immediately. Strangelets too were discounted, with the report saying "according to most theoretical work, strangelets should change to ordinary matter within a thousand-millionth of a second."

Plus, says Mättig, even if tiny black holes were created and Hawking radiation didn't exist, there wouldn't be a problem. "At CERN, protons will be crashed into protons," he says. "This is something that happens billions of times a second in nature. We don't need theories, we can see it -- the existence of our universe is proof enough that there is no danger."

Currently, the LHC is in the process of being cooled down to a temperature of minus 271 degrees Celsius, a necessary step to vastly improve the facility's efficiency. It should be switched on for the first time in the next two months. Initial reports of its findings will likely be produced this winter. If all goes according to plan.