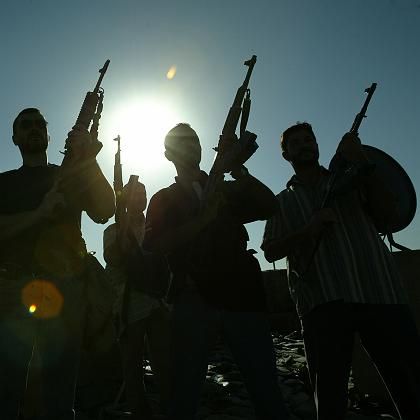 Mercenaries in Iraq are under fire.

They were harsh words: Iraq's government speaker Ali al-Dabbagh announced that the Iraqi Interior Ministry had revoked the license of US security contractor Blackwater, adding that Baghdad would "review the situation" of all private security firms.

In addition, Shiite cleric Muqtada al-Sadr called for the government to ban all foreign security contractors in the country. "This aggression would not have happened had it not been for the presence of the occupiers who brought these companies, most of whose members are criminals and ex-convicts in American and Western prisons," al-Sadr said in a statement.

Harsh words, but in the end it will probably turn out that this barking dog has very little bite. Sunday's deadly shootout involving Blackwater -- resulting in the deaths of 11 Iraqis under circumstances that remain unclear -- has prompted some swift diplomatic shadow-boxing: Baghdad blustered and US Secretary of State Condoleezza Rice personally phoned Iraqi Prime Minister Nouri al-Maliki on Monday night to express her regret.

Meanwhile, Blackwater's private army is waiting patiently for the dust to settle -- in order to then continue its mercenary work in Iraq. Undisturbed, uncontrolled and unregulated.

It was not the first time that Blackwater -- or one of the hundreds of other security contractors in Iraq -- made the headlines. Indeed, individual firms have been sent back to the United States, usually without facing any penalties for misdeeds. Each time, the storm settled again soon afterwards. And each time, the mercenaries continued their patrols. They have long become indispensable, the "whores of war." That, in any case, is what Katy Helvenston -- the mother of Blackwater employee Scott Helvenston, who was killed in Fallujah in 2004 -- called them. Helvenston believes the company's stinginess and greed is partly to blame for her son's death.

But today, no one in Iraq can do without private security contractors any more -- neither the US military nor the diplomatic corps. US Ambassador Ryan Crocker says his Blackwater escorts are indispensable. Last week he testified to the US Senate that "there is simply no way at all that the State Departments Bureau of Diplomatic Security could ever have enough full-time personnel to staff the security details necessary in Iraq. There is no alternative except through contracts.

And, notwithstanding all its displays of displeasure, Iraq's government is itself dependent on contractors. Nothing works in Baghdad without Blackwater -- which is why the US State Department yesterday ordered its diplomats there to remain in the barricaded Green Zone for the time being, until the whole issue has been resolved.

Iraq's government is not formally authorized to discipline security firms like Blackwater or even banish them from the country. Backed by Washington, Blackwater's men operate in a legal gray zone. They are immune to Iraqi law -- and at the same time they are largely left in peace by US courts should they be sent home.

This farcical state of affairs becomes particularly obvious when one looks at how they are licensed. Since the 2005 elections in Iraq, the legal status of the mercenaries has been unclear -- leading many firms to ignore the law entirely. Many firms apparently no longer even bother to have their annual licenses renewed by the Iraqi Interior Ministry. Security experts in Baghdad have been quoted as saying that few companies have valid permits for their activities and rely on bribery instead.

In the case of Blackwater, the US State Department has still not been able to clarify whether the firm even has a valid license that could be revoked. According to the Private Security Company Association of Iraq, Blackwater has applied for a license, but they have no record of them having received one.

Moreover, no one knows exactly how many private security firms are actually active in Iraq. Estimates of the number of mercenaries from the US and Europe range from 20,000 to 50,000 -- a private "shadow army" as The Nation has called them -- in the slipstream of the regular military. They stand by the checkpoints in the Green Zone, protect United Nations facilities, escort diplomats and members of parliament through the firing zones and patrol both the streets and the airspace. And they are heavily armed.

Blackwater is the most notorious example of this secretive, unregulated business sector. Founded in 1997 by Erik Prince, the Christian conservative beneficiary of a multi-million-dollar inheritance and a former Navy SEAL, the firm currently has about 2,300 mercenaries stationed in nine countries, of which about 1,000 are stationed in Iraq. There are another 20,000 Blackwater employees in reserve.

By its own description, Blackwater strives to achieve an honorable goal: "to support security, peace, freedom and democracy everywhere." In the firm's early days, however, their actual achievements lagged far behind that lofty creed.

Then came Sept. 11, 2001. Shortly after the terrorist attacks, Prince told the conservative news channel Fox News, "I've been operating in the training business now for four years and was starting to get a little cynical on how seriously people took security." He added that "the phone is ringing off the hook now."

The callers included the Central Intelligence Agency (CIA), the US Department of State and the Pentagon. Soon Blackwater had secured government contracts worth almost a billion dollars -- often without any competition. The company's headquarters in the marshes of North Carolina soon mushroomed into the world's largest military base, complete with shooting ranges, ghost cities to train urban combat, an artificial lake and a runway.

Blackwater's main client is the US Department of State --- the company has been protecting US diplomats in Iraq since 2003. The firm also provides bodyguards for Congressmen and women visiting Iraq.

To this day, Blackwater and the other private security firms in Iraq operate under Memorandum 17, a document the US occupation force foisted on the Iraqi transitional government in 2004. The regulations outlined in the memorandum make mercenaries subject to the legislation of their home country -- and grant them immunity from Iraqi law. While the circumstances in Iraq have changed dramatically, Andy Bearpark, the director of the British Association of Private Security Companies, insisted this week that "we would still wish certain elements of immunity to be maintained" because the Iraqi legal system "is simply not robust enough at the moment to allow for them to be removed."

"It's a very murky area," complains Jan Schakowsky, a member of the Democratic Party who has long been fighting in the US Congress for the regulation of private security firms -- so far unsuccessfully. "Under what law are these individuals operating, and do the Iraqis have the authority to prosecute people for the crimes they're accused of committing?"

According to US news reports, several hundred "serious incidents" involving private firms have occurred since 2003. Blackwater attracted worldwide attention in March of 2004, when Iraqi militias attacked a convoy of company trucks in Fallujah.

'In Iraq For The Duration'

Four Blackwater guards, including Helvenston, were killed. Their corpses were mutilated and burned; two were suspended from a bridge across the Euphrates. Relatives later accused the firm of being partly to blame for the incident due to incompetence and greed. Twenty-seven soldiers and hundreds of civilians died during the ensuing US Marine mission to take Fallujah.

Five Blackwater employees died when a helicopter was shot down in 2005. Five more died in a similar incident this year. A Blackwater employee shot an Iraqi security agent dead in December of 2006. The man lost his job, but faces no additional repercussions.

So far, the most recent case has led to a stalemate. On Tuesday, the US State Department prohibited its diplomats in Baghdad, who depend on Blackwater's protection, from leaving the Green Zone until the accusations have been evaluated. But security experts doubt the affair will have a long-term effect on Blackwater's business. Author R.J. Hillhouse wrote on her blog that the "smart money says that Blackwater is in Iraq for the duration."