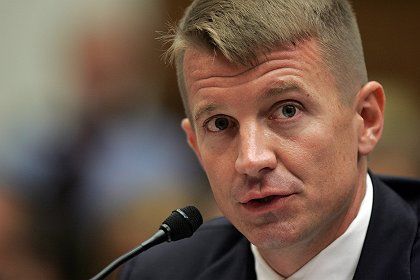 Erik Prince, CEO of Blackwater USA testifies before the House Oversight and Government Reform Committee. He said his men were "dedicated professionals," risking their lives to protect Americans.

Erik Prince has already been in quite a few hot spots. The former elite soldier was a Navy SEAL commando and was deployed in Haiti, the Middle East and Bosnia. But on Tuesday the press-shy soldier had to fight on a new front, facing the largely hostile US Congress and -- via live TV -- the American public.

Prince is 38 but looked much younger, he is slender and brawny with a military crew-cut. His suit sat uncomfortably on his shoulders as if he would much rather be wearing a camouflage jacket. He answered questions with "Yes, Sir," and "No, Ma'am." From time to time a smile crossed his lips, but otherwise he hardly moved a muscle, apart from tapping his silver pen. "If there's two questions left," he said toward the end, "I'll take them and then let it be done."

As the founder and CEO of Blackwater USA, the mercenary group whose exploits in Iraq are now under investigation, Prince is a man who is used to giving orders, not taking them. Prince, the heir to a manufacturing fortune, sold the family business in 1997 and used the money to set up the security firm. He is also a Christian conservative, who used his family connections to get an internship at the White House -- and later to secure lucrative billion dollar contracts in Iraq and other conflict zones.

It was these contracts that brought him before the US House of Representatives Oversight and Government Reform Committee. Its chairman Democrat Henry Waxman had already released a damning report the previous day: Blackwater was a troop of "trigger-happy" killers.

According to the report, Blackwater, which is responsible for protecting US diplomats in Iraq, has been involved in at least 195 shooting incidents involving civilians since 2005 (around 1.4 a week). In over 80 percent of these incidents Iraqis were injured or killed. In some cases their families were paid $15,000 to, in the words of the US State Department, "put this unfortunate matter behind us quickly."

Going on the Offensive

The battle lines were drawn and Prince knew what to expect. The Democrats had already made up their minds about Blackwater before he even opened his mouth. The Republicans, on the other hand, defended him with pseudo-patriotic words of thanks for his "service to the nation."

Prince provided a great attraction. The multimillionaire, who lives on his colonial estate in Virginia, avoids interviews and never talks about his troops or their training camp in North Carolina, the biggest private military base in the world.

For a long time he didnt even comment on the bloodbath that his troops caused on Sept. 16 in Baghdad. But anyone who was hoping for an explanation before the Congressional committee would have been disappointed, even though he was under oath as a witness. Prince repeatedly went on the offensive, defending his men and avoiding questions, giving evasive answers or claiming not to remember. He insisted that "Blackwater is a team of dedicated professionals who risk their lives to protect Americans in harm's way overseas."

"A lot of people call us mercenaries," bristled Prince. "We are Americans, working for Americans." His men, he said, are by nature patriots. "They bleed red, white and blue." Something that is obviously not true. Under pressure from the Democrats he had to admit that 233 foreigners work for Blackwater as private soldiers in Iraq alone.

He calls the criticism of his 1,100 people in Iraq a "rush to judgment based on inaccurate information." His main argument: Not a single US diplomat has come to harm under Blackwater's protection "apart from one burst eardrum." However 27 Blackwater men have died, and "hundreds" have been injured.

The families of four of the Blackwater dead also sat in the room, relatives of the US mercenaries who had been lynched in Fallujah in 2004. Some have sued Blackwater, claiming that the company is partly responsible for the incident. A congressional report recently stated that Blackwater had "delayed and impeded" the probe into the case.

In the current case, Prince remained resolute despite a four-hour cross-examination -- and contradicted the Iraqi government. "Based on everything we currently know, the Blackwater team acted appropriately while operating in a very complex war zone on Sept. 16," he said. The Blackwater convoy came under fire after a car bomb exploded, he said, adding that some of the attackers wore Iraqi police uniforms and five of his employees had shot back. "To the extent there was loss of innocent life, let me be clear that I consider that tragic."

This was the only time that he showed any trace of emotion. The Democrats again and again confronted him with cases in which Blackwater men had shot Iraqis. Prince described these as incidents where rules had been broken -- as if it was just property that had been damaged. The survivors had been appropriately compensated, he said, sometimes with $5,000, sometimes with $20,000 -- the usual sums in Iraq, apparently.

But what consequences can Blackwater employees who become killers expect? On Christmas Eve 2006, a drunk Blackwater mercenary shot the bodyguard of the Iraqi vice-president. The man, Prince said, had been expelled from Iraq within 36 hours. His punishment? The man was immediately fired and lost his holiday bonuses -- $3,000 each for Christmas and July 4. In addition, he had to pay for his own flight home. "We fired him, we fined him, but we as a private organization can't do anything more,'' Prince commented.

Democrat Paul Hodes countered that the case was a potential murder. Prince saw it differently. It was a guy who had put himself into a potentially bad situation, he said. No word about the Iraqi victim.

The probe has found out that Blackwater, which is the exclusive contractor of the US State Department in Iraq, is extremely expensive: The cost of a Blackwater guard is "over six times more than the cost of an equivalent soldier," according to the report. Even Secretary of Defense Robert Gates himself had complained about that fact before Congress last week, saying that Blackwater's high wages are luring more and more good men away from the US forces.

Prince at first tried to deflect the question of how much he personally earns in a year. Democrat Peter Welch kept pushing. More than $1 million, Prince finallyconceded. Welch proceeded to calculate Prince's war profit: With revenues of approximately $1 billion since 2003 and a profit margin of 10 per cent -- which Prince admitted -- that amounted to $100 million, he said. Prince, however, did not want to give a concrete profit figure, saying he could not calculate in factors such as "depreciation" off the top of his head. Democrat Christopher Murphy expressed his disbelief that the CEO of a company could not give a rough figure for profit. Prince shrugged nonchalantly: "I'm not a financially driven guy."

But the most important question was almost lost in the whole discussion: Is it acceptable to outsource the war? And if so, at what price?

Inside our government, it has become an article of faith that outsourcing is best, Waxman complained at the beginning. His Republican committee colleague Tom Davis countered that it "is foolish to propose the elimination of private contractors." Representative Jan Schakowsky announced a bill Tuesday which would "responsibly phase out" private military contractors such as Blackwater. But President George W. Bush, an old family friend of the Princes, would be able to veto such a move.

Only twice was the legal no-man's-land in which companies such as Blackwater operate -- legal loopholes, as the human rights organization Human Rights Watch described them Tuesday -- addressed directly. Regarding the US exception clause according to which his men enjoy immunity from prosecution under Iraqi law, Prince said proudly that he welcomed this regulation with his whole heart, saying that he did not believe any foreign contractor would receive a fair trial in Iraq.

And at home in the US? At the end, Prince rose, went to the representatives and shook the committee members by the hand -- but only the Republicans.