The guns were silent in the Caucasus on Wednesday following a cease-fire deal agreed to by both Moscow and Tbilisi on Tuesday. But the international community is still trying to figure out how to respond to the six-day-war which saw Georgia and Russia battle it out over the renegade Georgian provinces of South Ossetia and Abkhazia.

European Union foreign ministers gathered in Brussels on Wednesday to hear a report from French Foreign Minister Bernhard Kouchner who, along with French President Nicolas Sarkozy, helped broker the Tuesday cease-fire. He and his counterparts are hoping to forge a common European Union position on the way forward as both Georgia and Russia are observing a day of mourning for those who died in the fighting.

Once the 27-member EU approves the plan hammered out between Sarkozy, Georgian President Mikhail Saakashvili and Russian President Dmitry Medvedev (under the guiding hand of Prime Minister Vladimir Putin), the agreement could become the basis for a UN Security Council resolution. In addition, the EU may approve more humanitarian aid for the war-torn region. Sarkozy on Tuesday raised the possibility of sending EU peacekeepers to the Caucasus, but there is little to indicate that Russia would sign on to such a plan.

Kouchner reiterated the idea on Wednesday, though he shied away from using the word "peacekeepers." "The idea of having monitors -- what you call peacekeeping troops, I wouldn't call them like that -- But European controllers, monitors, facilitators, yes, yes and yes. That is how Europe should be on the ground," Kouchner told reporters on Wednesday morning. 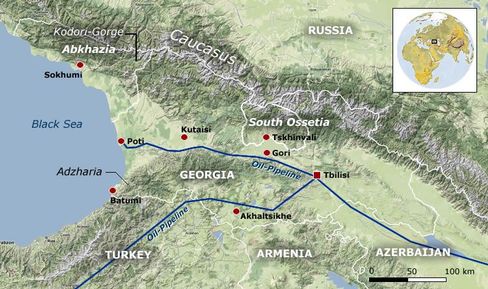 In addition to concrete steps, though, many will be calling for tough language on Russia. Some would like to see the EU's ongoing negotiations with Russia broken off as well as sanctions. But getting the entire bloc to agree might be difficult.

"I hope the European Union could remain united tomorrow, but I expect that will be the hardest part," Slovenian Foreign Minister Dimitrij Rupel told reporters on Tuesday evening. "The older members are more reserved, while the new members, who have their own experiences with Russia, are more energetic."

The new members Rupel is talking about, of course, are those which spent much of the second half of the 20th century behind the Iron Curtain. And a deep skepticism of Russia remains. Indeed, a group of leaders from Eastern Europe travelled to Georgia on Tuesday to proclaim their solidarity with the Georgians.

Polish President Lech Kaczynski -- who was joined by the leaders of EU members Lithuania, Latvia and Estonia along with Ukrainian President Viktor Yushchenko -- told tens of thousands of Georgians gathered in Tbilisi: "We are here to take up the fight. For the first time in quite a while, our neighbors have shown the face which we have known for hundreds of years. These neighbors feel that the nations around them should be subservient to them. We say no!"

There has likewise been some tough talk from core EU states. British Foreign Secretary David Miliband told BBC radio on Wednesday that "the sight of Russian tanks rolling into parts of a sovereign country on its neighboring borders will have brought a chill down the spine of many people. That is simply not the way in which international relations can be run in the 21st century."

Nevertheless, there are many in the EU who are unwilling to lay all the blame for the Caucasus violence at the door of Moscow. The war started when Georgian President Mikhail Saakashvili, responding to an uptick in violence in South Ossetia in recent weeks, ordered his forces into the province last Thursday evening. The response by Russian forces was overwhelming and swift -- and included Russian advances into Georgian territory as well as the bombing of numerous cities and villages inside Georgia proper.

"Saakashvili was mad to go and bomb a town in the middle of the night," a senior French official told reporters on Tuesday night, according to Reuters. "He gambled, he lost."

German Foreign Minster Frank-Walter Steinmeier on Wednesday indicated his opposition to strong EU language on Russia. "I don't think we should lose ourselves in long discussions about responsibility and blame for the escalation of recent days," he said. Instead of finger pointing, Steinmeier said, the EU should "look to the future and take a role in further stabilization."

Italian Foreign Minister Franco Frattini has also been critical of Saakashvili and said that he would not support harsh EU steps against Russia. An EU diplomat told Reuters that "the overwhelming majority wants to focus on what is needed on the ground  the main focus is the cease-fire, stabilization and to bring help to people."

Still, even as Russia agreed on Tuesday to pull back its military to positions occupied before the war, it is doubtful that Moscow will escape unscathed. On the one hand, it has sent a clear message that it will not tolerate military adventures in regions it regards as falling under its influence. On the other, however, it has triggered widespread skepticism as to its reliability as a partner.

The US on Wednesday cancelled an annual joint military exercise -- which includes the US, France, Britain and Russia -- scheduled for next week. According to news reports, the US is also looking closely at Russia's bid for membership in the World Trade Organization and the Organization for Economic Development and Cooperation.