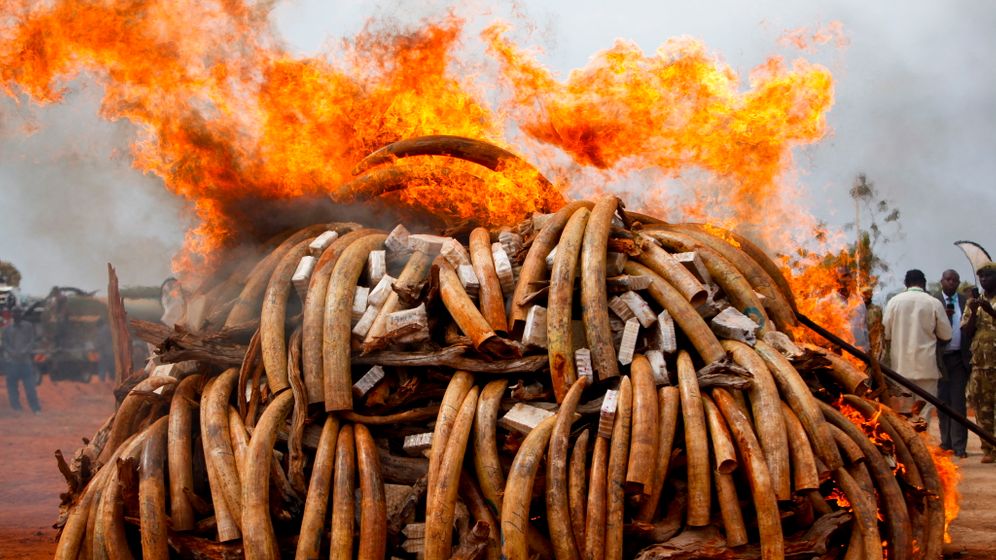 The eight game wardens from the Kenya Wildlife Service spent hours lying in wait between bushes and tree trunks. An informant had given them a tip that poachers would show up at this particular spot sometime in the afternoon.

When the poachers did indeed appear, a wild gunfight broke out that lasted some 40 minutes and left one Somali poacher dead next to his military-grade, fully automatic assault rifle. The five others, some of them injured, were able to slip away into the bushes, and another normal day's work for the game wardens of Tsavo East National Park drew to a close.

In fact, this day two weeks ago was one of the better ones. The wardens themselves suffered no losses in the skirmish and they got there in time, instead of finding an elephant carcass with its tusks cut off, as is so often the case.

Around 500,000 elephants still live in Africa, but poachers kill several tens of thousands of them each year, and that number is on the rise. Customs officials seized over 23 tons of smuggled elephant tusks in 2011, the highest amount in 20 years.

New players have entered the bloody business of African ivory, and they are even more brutal than average poachers. These are militia members and rebels who mow down the animals with heavy arms to finance their wars. Groups such as the militant Islamist al-Shabab in Somalia, the Janjaweed of Sudan and the notorious Lord's Resistance Army in Uganda are turning the savannahs of central Africa into a Killing Fields for elephants.

As diamonds once did in Sierra Leone, ivory is now "fueling conflicts across the continent," The New York Times wrote earlier this month. At a US Senate hearing this May, expert on illegal trade Tom Cardamone testified: "In recent years, organized crime syndicates, militias, and even terrorist elements have taken notice of the profits that can be made in the illegal trafficking of wildlife, generating an alarming up-tick in the scale of the industry and posing serious national security concerns for the United States and our partners." Experts in Africa are already talking of "blood ivory," an allusion to the "blood diamonds" that warlords in Sierra Leone once used to pay for their ammunition.

Julius Kipng'etich, who heads a team of 3,500 Kenyan wardens, refuses to be intimidated by guerrilla leaders. "We're going to make life as difficult as possible for the poachers," he says. Seven of his wardens have been killed in gunfights with poachers just this year, so Kipng'etich issued his men a new order some days ago: "Shoot to kill." They should no longer fire warning shots, but instead aim immediately for the heart or head. "These people are hard as nails," he says. "They want to kill as many of us as possible and eradicate our elephants. It is a bullet for a bullet. Kill them too."

Kipng'etich has outfitted his troops with helicopters, all-terrain vehicles and laboratory equipment. "Near the Somali border, we operate like an army," he explains. This is where al-Shabab warlords send raiding parties into Kenya with increasing frequency to hunt elephants. Sometimes they hire young Kenyans for the job, paying them the equivalent of €90 ($70) for a pair of tusks.

Al-Shabab, which is fighting against the interim government in Somalia, has little difficulty shipping this stolen ivory to Asian markets, since the terrorist group controls the port city of Kismayo, also an important hub for weapons and drugs.

Nearly 90 percent of the ivory that is traded globally goes to China and Thailand, where economic success has fueled demand. Ivory knickknacks are a status symbol for China's newly rich, and it is a custom among Japanese businesspeople to seal contracts with ornately carved ivory stamps.

China also has other ways of getting ivory. Beijing has several hundred thousand workers and engineers in Africa, building streets, railway lines and governmental buildings. "And everywhere they go, elephants are dying. It's something the Chinese embassy doesn't like to hear, but it's true," Kipng'etich says.

In the area around Gulu, in northern Uganda, elephants are now extinct, many of them massacred by the Lord's Resistance Army (LRA) terrorist group. Joseph Okot, now 25, was a child soldier with the LRA and was forced to hunt in Murchison Falls National Park. "We shot everything that crossed our path," Okot says. The meat was for soldiers' cooking pots, and the commanders took the tusks.

The group is running riot in the triangle where the Democratic Republic of the Congo, South Sudan and the Central African Republic converge, a region no government controls. "The LRA rules the area, and ivory is one of its most important sources of income," says Michael Wamithi, a Kenyan elephant expert and government advisor.

Deserters have repeatedly reported that they were ordered personally by Joseph Kony, the notorious head of the LRA, to poach elephants. This April, Congolese wardens in Garamba National Park stole back a few elephant tusks from a group of LRA fighters. In June the wardens caught another group red-handed -- then had to flee as the well-trained guerrillas opened fire on them as if in battle.

One kilogram (2.2 pounds) of ivory can earn up to $2,000 on the black market, and a single tusk weighs 10 to 60 kilograms (20 to 130 pounds). In other words, a single dead elephant bull can bring in up to $120,000. That's a lot of money in Africa, and easy to earn as well -- rather than violently forcing hundreds of workers to labor in diamond mines, all it takes to gain access to this valuable resource is a few gunshots and several swings of a machete.

The LRA maintains excellent connections to Omdurman, Sudan's largest city, where middlemen trade elephant tusks for weapons and ammunition. But it's also possible to transport ivory through Uganda, Kenya or the Congo, where customs officials are often poorly paid and easy to bribe.

The war over elephants began with a political mistake, complains Wamithi, the elephant expert in Kenya. In 1989, with the African elephant in danger of extinction, the Convention on International Trade in Endangered Species of Wild Fauna and Flora banned the trade in ivory around the globe. The convention served its purpose, and the elephant population recovered.

But as a result, countless tusks began piling up in the storerooms of African game wardens, for example those of animals that had died a natural death -- and that aroused greed. In 2008, Zimbabwe, South Africa, Namibia and Botswana obtained special permission allowing their governments to sell 108 tons of ivory, and traders from China and Japan paid millions. But like alcoholic in relapse after a long period of abstinence, the appetite for more returned immediately. "That fueled demand," Wamithi says, "and the slaughter began again."

Earlier this year, the killing reached a brutal peak, when in just a few weeks poachers shot 350 out of around 1,500 elephants living in the Bouba Ndjida National Park in Cameroon. The four game wardens who oversee the park, which covers an area nearly as large as the German federal state of Saarland (2,600 square kilometers), didn't stand a chance. All they could do was look on as strange warriors on horseback, Kalashnikovs strapped to their chests, poured into the park.

The poachers cut pieces from the ears of the elephants they killed, an indication that they most likely came from Sudan, over a thousand kilometers (600 miles) away, where it's traditional to take such trophies.

None of the poachers were captured, but the wardens believe they were members of the Janjaweed, mounted warriors who have killed thousands of civilians in the Darfur region of Sudan. The millions of dollars their poaching raid must have brought in will allow them to replenish their weapons stores.

Michael Wamithi and most other elephant conservationists believe there is only one way to save these animals in the long term: The strict trade ban established in 1989 must urgently be reintroduced. "As long as there's a market for it," says Wamithi, "the killing will continue."