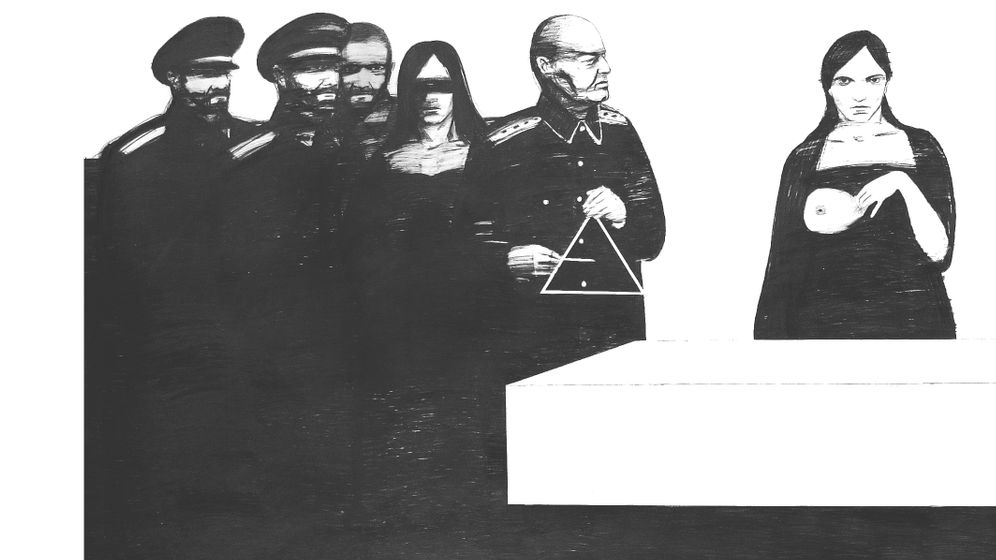 At first glance, the banned picture looks like a traditional painting. It shows clerics sitting cross-legged, as Persian miniatures, and the whole effect would be very ornamental -- if it weren't for the map of Tehran bearing dots in rich green. These dots mark the squares and streets where hundreds of thousands of the city's residents gathered during last year's "Green Rebellion" to express their opposition to President Mahmoud Ahmadinejad, sending their anger out to the world via Twitter. Green dots can mean many things, but in Iran they mean, "I belong to the opposition."

A gallery in Tehran dared to exhibit this picture a couple of months ago. The painter, a young avant-garde artist, was in prison at the time, awaiting his sentence and with nothing left to lose. After just one day, the gallery was forced to take the painting down again.

Tehran is a city of 13 million, a city where audiences at rock concerts sit in chairs, monitored by members of the Basij militia. It's a city where a religious court can sentence citizens to be whipped for attending a party, and where people are still stoned to death. There are also few countries in the world that are younger -- estimates put 70 percent of Iran's population at under 30 years old.

A lively, young scene has been developing underground in Tehran for many years. Artists put on secret shows or try to smuggle their work past censors into galleries and to sell their art abroad.

Mohammed Ziai, 61, has been following Iran's art scene for decades. A professor of visual arts at Tehran University, he knows the views and the means of distribution employed by his students and the more daring gallery owners. Ziai has friends who are established artists and he publishes in an avant-garde art magazine. He has watched the situation come to a head in the past five years.

As recently as 2005, Iranian artists Bita Fayyazi Azad and Mandana Moghaddam were allowed to represent their country with impressive installations at the Venice Biennale. But after Ahmedinejad's election that same year, the situation for artists in Iran worsened abruptly. "Suddenly, artists were again required to submit the works they wanted to exhibit," Ziai says. As the level of control increased, so did the artists' anger -- all the more following the bloody conclusion of last year's rebellion.

Here, SPIEGEL presents previously unknown works by Iranian artists for the first time, fresh from the studio. These artists want to show their work but prefer to remain anonymous. Blood red and revolution green dominate many of the paintings. In one, a woman bears her right breast to a police tribunal. In another, a woman is exposed naked to a rape scenario. Photographs show metal bars, and a closer look at the abstract paintings reveals injured figures. There are many taboos in Iran, of course -- and of course artists break them.

Other images first achieve their true potency when viewed with knowledge of the difficulties behind their creation. A field of light red with intense dark reds applied is suddenly more than just a play of colors -- perhaps a corpse with gunshot wounds?

Censorship at the Art Schools

Censorship starts at the country's art schools. The qualifying examination looks not just at talent but also at ideological conformity. Unlike in Europe, drawing nudes is not part of the curriculum and there are few courses in video or installation art. At the end of each school year, functionaries come to view the current classes' exhibits. Galleries also have to present all the works they plan to exhibit to censorship authorities at the culture ministry before they can open a show.

"There are at most 10 galleries that even dare to display contemporary, radical political positions," Ziai says, "and some exhibits in Tehran last just a single night." Openly provocative works are taken away and the galleries closed. Many artists can't find galleries willing to exhibit their works -- not in Iran nor elsewhere. In order to survive, they work as graphic designers or produce sanctioned art.

The established positions in Iranian art can be seen at the Tehran Museum of Contemporary Art, a grand building in the city center. Along with Picassos, Warhols and Braques, the museum shows works by successful artists living in exile, including Parviz Tanavoli, 73, whose decorative sculptures now sell for millions, and Shirin Neshat, 53, known in the West for her photographs decorated with calligraphy, often derided in Iran as commercial "chador art." The Museum of Contemporary Art answers to the Culture Ministry.

But not far away, the inconvenient and the nonconformist are operating underground -- literally. A studio has taken up residence in a basement in downtown Tehran, and is using its website as a weapon: "Working for a real underground movement, a creative renaissance in street expression, galleries and digital scene instead of Mainstream and Mass Media art," a message there reads. The group collects and catalogues photographs of street art in Tehran, before publishing them online.

Street art and graffiti provide the greatest imaginable contrast to the oversized portraits of the Ayatollah that adorn building walls. At exhibition openings in private apartments, guests drink alcohol and women take off their headscarves, while Tehran's artists play an age-old game of cat and mouse with the authorities.

"You can't control art," Professor Ziai says. "Art is life's reporter, as history has proven." History has also shown that functionaries' censorship of art is always fallible. "Where there is repression, a culture develops its own symbolic language that insiders know how to interpret. Sometimes even blatant criticism slips past the censors."

A 24-year-old photographer asked young Tehran residents to remember their traumatic experiences during the days of the Green Revolution. Most of these young people started to cry as the artist photographed their faces. The resulting work provides a portrait of a wounded generation.