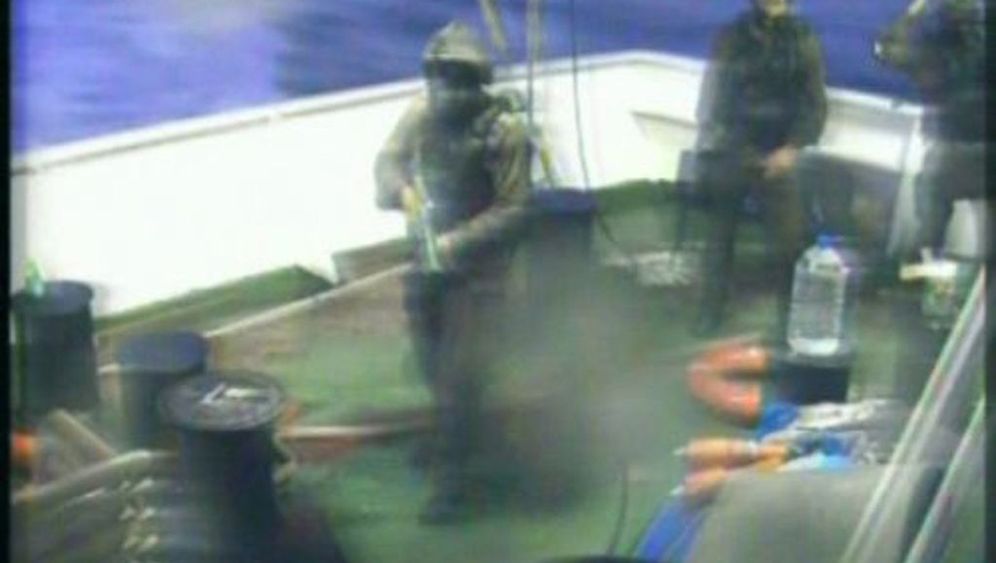 European countries have strongly condemned Israel's storming of an activist flotilla heading for the Gaza Strip early on Monday, which left at least 10 people dead. An Israeli private television broadcaster is reporting that up to 19 may have died.

Speaking in Berlin on Monday afternoon, German Chancellor Angela Merkel said she had spoken by telephone to Israeli Prime Minister Benjamin Netanyahu about the incident. "I expressed my deep concern and pointed out that we must do everything to prevent an escalation of this difficult situation," she said. "It is necessary to investigate the events as quickly as possible, and comprehensively." The chancellor said it would be helpful if "international observers" were present during the probe.

"We are dismayed at the loss of life and I said in my telephone call with Israeli Prime Minister Netanyahu that German citizens including two members of parliament are affected and asked for information as soon as possible on the fate of these German citizens," Merkel said. The chancellor said there was an urgent question over whether the action was "proportionate, and that is why a quick investigation is needed."

Earlier in the day, a German government spokesman said his country was "shocked by events in the international waters off Gaza." Spokesman Ulrich Wilhelm told reporters on Monday, "The government deeply regrets the loss of human life."

In a first reaction on Monday morning, German Foreign Minister Guido Westerwelle said he was "deeply concerned" about the Israeli operation. Later, after a telephone conversation with Israeli Foreign Minister Avigdor Lieberman, Westerwelle called for a "neutral" investigation into the incident. "I insisted that a comprehensive, transparent and neutral investigation has to take place into all the circumstances," he said, referring to his conversation with Lieberman. Westerwelle called on the Israelis and Palestinians to carry on with indirect peace talks despite the "tragic event." The two sides are currently talking about recommencing direct peace talks with the help of an American mediator.

The Obama administration voiced its concern about the incident. The United States "deeply regrets the loss of life and injuries sustained," said White House spokesman Bill Burton, who added that American officials are "currently working to understand the circumstances surrounding this tragedy."

US President Barack Obama was scheduled to meet with Israeli Prime Minister Benjamin Netanyahu and Palestinian Authority President Mahmoud Abbas at the White House Tuesday for talks. However, Netanyahu, who is currently in Canada will now return home instead of traveling on to Washington. His office said Monday that the prime minister had expressed his "full backing" for the military involved in the raid. The incident is Netanyahu's most serious diplomatic crisis since he took office in March 2009 and looks set to badly damage Israel's international reputation.

French President Nicolas Sarkozy said in a statement that he condemned the "disproportionate use of force" and spoke of his "deep emotion in the face of the tragic consequences of Israel's military operation."

French Foreign Minister Bernard Kouchner called for an immediate inquiry. "I am profoundly shocked by the tragic consequences of the Israeli military operation," Kouchner said in a statement. "Nothing can justify the use of violence such as this, which we condemn. The circumstances of this drama must be fully brought to light and we wish for a thorough inquiry to be put in place without delay."

The European Union has also called for an investigation into the incident. "High Representative Catherine Ashton expresses her deep regret at the news of loss of life and violence and extends her sympathies to families of the dead and wounded," said a spokesperson for Ashton, the EU's foreign policy chief. "On behalf of the European Union she demands a full enquiry about the circumstances in which this happened."

Spain, which currently holds the rotating EU presidency, condemned the violence as "unacceptable" and "very serious." "We have summoned the Israeli ambassador (to Spain) to give us explanations and, of course, we will investigate and will start handling this matter immediately," said Diego Lopez Garrido, a senior Foreign Ministry official responsible for EU affairs.

British Foreign Secretary William Hague said he deplored the loss of life and called for the blockade on Gaza to be lifted. "There is a clear need for Israel to act with restraint and in line with international obligations," he said.

"I am shocked by reports of killing of people in boats carrying supply to Gaza," said UN Secretary-General Ban Ki-moon, who called for a "thorough" investigation. "I heard the ships were in international water. That is very bad."

As well as Spain, Turkey, Greece, Egypt, Sweden and Denmark have also summoned Israeli ambassadors to demand explanations for the violence.

'No Evidence of Live Fire'

Israeli commandos stormed the largest of the flotilla's six ships in the early hours of Monday. The flotilla left Cyprus on Sunday and was carrying around 100 pro-Palestinian activists from the Free Gaza movement. The ships were heading for the Gaza Strip, which has been under an Israeli blockade since the Islamist movement Hamas took control in 2007, and were carrying around 10,000 tons of relief supplies, including wheelchairs and medical supplies. Israel had repeatedly warned that it would not allow the boats to reach the Gaza Strip.

Israeli forces are reported to have killed at least 10 people and wounded dozens during the operation. Some reports put the death toll as high as 19. The incident apparently happened in international waters, around 40 miles (64 kilometers) out to sea.

The circumstances of the incident are unclear. Israel claims its troops came under heavy resistance from the activists, who allegedly shot at the commandos and attacked them with sticks and knives. The activists deny the accusations. "We were not going to pose any violent resistance," a spokesperson for the group told the BBC, adding there was "absolutely no evidence of live fire." A reporter who was on one of the boats told the Associated Press that the Israelis fired on the ship before boarding it.

Turkish television footage from the Turkish ship which is leading the flotilla appeared to show a number of injured people and fighting between the activists and Israeli soldiers.

Dozens of European politicians were reported to be on board the flotilla, including two members of the German parliament, Inge Höger and Annette Groth, both of whom belong to the far-left Left Party. Left Party floor leader Gregor Gysi called for the German government to demand an immediate stop to the violence. A spokesperson for the party said that they currently had no contact with the two lawmakers.

Several of the ships were sailing under Turkish flags, and Ankara was quick to react. Turkey's Deputy Prime Minister Bulent Arinc said Israel had committed "piracy." "We strongly condemn these inhumane practices of Israel," the Turkish Foreign Ministry said in a written statement. "This deplorable incident, which took place in open seas and constitutes a flagrant breach of international law, may lead to irreparable consequences in our bilateral relations. () Israel will have to bear the consequences of this behavior, which constitutes a violation of international law."

As well as withdrawing its ambassador from Israel, Turkey said it would cancel three joint military exercises with Israel. It also called on the UN Security Council, of which it is currently a member, to hold an emergency session on the incident. Turkey used to be Israel's most important ally in the Muslim world, but relations have been strained recently.

Israel's Deputy Foreign Minister Danny Ayalon said Israel "regrets any loss of life and did everything to avoid this outcome," but accused the flotilla of "premeditated and outrageous provocation." Defense Minister Ehud Barak also said in a press conference Monday that he regretted the deaths but that the flotilla's organizers were solely responsible for the outcome of the raid, saying that the soldiers were forced to open fire in order to protect themselves. He described the Islamic aid organization IHH, one of the groups that organized the flotilla, as "extremist supporters of terror," and called on Arab and Palestinian leaders not to let what he described as "provocation by irresponsible people" ruin progress made in indirect peace talks.

Hamas has called on Muslims and Arabs to "rise up" in response to the incident, while Palestinian Authority President Mahmoud Abbas described Israel's actions as a massacre.

In Turkey, dozens of protesters tried to storm the Israeli consulate in Istanbul. Afterwards around 10,000 people marched from the consulate toward the city's main square shouting anti-Israeli slogans, the Associated Press reported.

The boats were being towed to the Israeli port of Ashdod and the wounded were evacuated by helicopter to Israeli hospital, officials said.