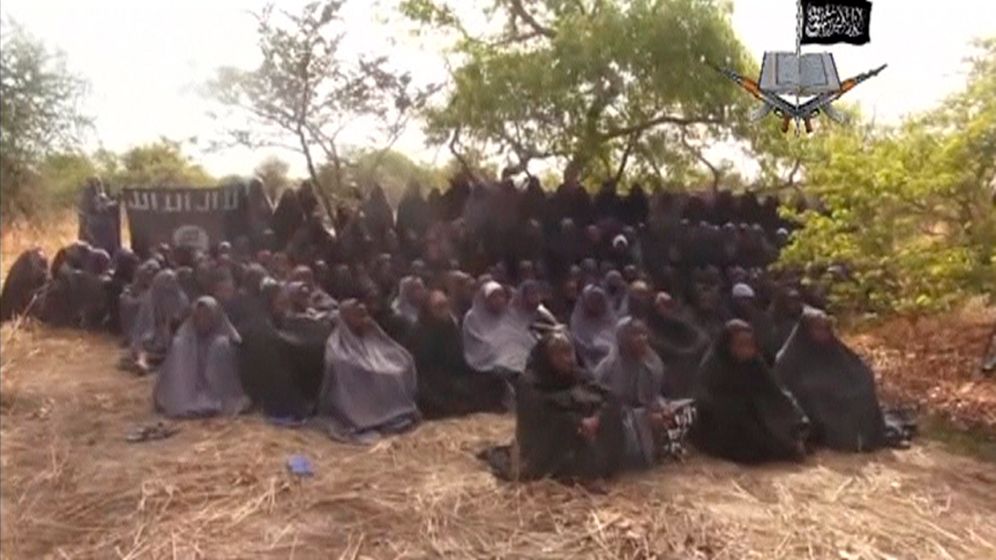 Photo Gallery: Nigeria on the Brink

The two girls had been tied and were found lying in a clearing in the bush, their faces scratched and bleeding, their school uniforms torn. "They were hardly conscious," says Baba Goni. "They were crying and said that their kidnappers had raped them."

Goni, a thin, 15-year-old boy from the area, had been combing the Baale region of northeastern Nigeria with a civilian militia on that day. They were searching for the schoolgirls the Islamist terrorist group Boko Haram had abducted from their boarding school in the city of Chibok on April 14.

Some of the 276 kidnapped girls have now escaped, including four this week, while 223 remain missing. Those who managed to get away have leveled serious accusations, saying that they were put at the mercy of the kidnappers when the teachers simply left the school, without helping them. The Nigerian military and police have been searching for the girls for weeks, creating a confused and helpless impression in the process. There is still no reliable information today on the whereabouts of the abducted girls.

Goni, who was held by Boko Haram for two years, is more familiar than government forces with the countryside around Chibok and the kidnappers. One night, the terrorists raided his village, Kachalla Burari, shot and killed his uncle, who was lying in bed next to him, and dragged the boy into the Zambisa forest. He was kept in a camp, where he was forced to work for the murderous organization, fetching water, gathering firewood and cleaning weapons.

When the jihadists tried to force him to kill his own father, he managed to escape at the last minute. Since then, Goni has provided valuable information to Nigerian security forces and serves as a scout for an armed militia group. Boko Haram has put a bounty of 3 million Naira (€13,500) on his head.

Goni is wearing a gray hoody and worn-out shoes, and there is a traditional decorative scar across his left cheek. He looks like an ordinary teenager, but his eyes are like those of an old man. He cannot read or write. Although he was raised as a Muslim and attended a madrassa school, his education there merely consisted of rote memorization of Koran verses.

His search team found the two abused girls a week after the kidnapping took place. They were lying, half-dead, in the sweltering heat, their hands tied to a tree. One of the militia members cut through the ropes with Goni's knife. The villagers were so frightened that they hardly dared leave their mud huts. The terrorists had stayed in the village for three days with their victims and killed four unruly girls, says Goni. "The bodies were buried somewhere. They didn't want to show us the graves."

'Bring Back Out Girls, Now and Alive!'

According to President Goodluck Jonathan, the violence in northern Nigeria has already claimed the lives of more than 12,000 people. The president, who has declared war on Boko Haram, assured the victims' families that he would do everything possible to rescue the girls.

Every day, between 50 and 100 protestors, mostly women of both the Muslim and Christian faith, gather around the dried up Unity Fountain in the capital Abuja. They don't think much of the president's pronouncements. They pray together and chant in unison: "Bring back our girls, now and alive."

In the midst of the crowd is a stocky woman wearing a green-and-yellow outfit and a bright red beret, with a megaphone in her hand: former Education Minister Obiageli Ezekwesili. "We are here because the government is not acting decisively enough," she says. "Our soldiers are not prepared for an asymmetrical war against terrorists. They are in urgent need of a new strategy."

Ezekwesili's criticism is relatively mild compared to that of opposition politician Nuhu Ribadu, who accuses the government and the armed forces of total failure. According to Ribadu, government forces are handicapped by their dilapidated equipment, poor discipline and chaotic communication. Morale is also poor among the soldiers, he adds, noting that their meager wage payments are often weeks overdue. "They are incapable of eliminating these criminals. On the contrary, corrupt officers are even collaborating with them."

Nine generals are currently under investigation on charges of selling arms to Boko Haram. Six soldiers died in a May 13 attack on a combat patrol of the 7th Infantry Division, which has been deployed in the Chibok region. The Boko Haram attackers were familiar with the details of the unit's whereabouts, which they likely obtained from corrupt "employees" in the army. When the division commander subsequently visited the troops, his own soldiers shot at his vehicle, because they suspected him of cooperating with Boko Haram.

"This is the way it started in Mali, too," Ribadu warns. "The Islamists overran the army, and then younger officers who refused to accept the humiliations staged a coup." Mali, he explains, is a warning sign for Nigeria. "Our military reflects the rotten state of the entire country."

Nigeria is, by its own account, now Africa's largest economy. But the torn country of 170 million remains a giant with feet of clay. Even though Nigeria is the world's sixth-largest petroleum-exporting country, pumps are often empty at gas stations. The country has 95 universities, but about 40 percent of the population is illiterate. The government sends peacekeepers to other crisis-ridden countries, but it is incapable of defeating enemies on its own territory.

Amnesty International accuses the Nigerian military of serious human rights violations. It alleges that soldiers often kill innocent Muslims, and that anyone with a beard is immediately suspect in their eyes. Baba Goni, the teenager from Chibok, witnessed soldiers shooting and killing a man named Alaji, who he had identified as one of his abductors. According to Amnesty, more than 950 people died in military custody in the first half of 2013 alone. Suffocation and starvation are the most common causes of death in the overcrowded internment camps, where many prisoners die of the consequences of torture or bleed to death from gunshot wounds. One of the military prisons is nicknamed "Guantanamo."

In light of the current crisis, the martial law imposed on the states of Adamawa, Borno and Yobe a year ago was extended last week. But this doesn't mean that the people there feel any safer. In fact, they fear the security forces as much as the terrorists. And the brutality of government soldiers is also driving more supporters and recruits, mainly young, unemployed men, into the arms of Boko Haram.

Nigeria's problems are particularly evident in the overwhelmingly Muslim north. The breakdown of government, corruption that eats away at all institutions, mass poverty and the struggle over scarce resources only exacerbates existing ethnic and religious conflicts between Christians and Muslims. This creates an ideal breeding ground for the fundamentalists of Boko Haram, a terrorist group that began as a sect and is very popular today, because it condemns the moral decrepitude of the political elites and the duplicitous imams.

President Goodluck Jonathan seems hopelessly overwhelmed by the crisis. Now seeking assistance abroad, he opened a "new front in the global fight against terror" at a security summit in Paris in the week before last. The host, French President François Hollande, and the leaders of Nigeria's neighbors, Chad, Niger, Cameroon and Benin, pledged to join forces and fight Boko Haram.

The United States, United Kingdom, Israel and China have also announced plans to provide military support. Washington wants to send 80 soldiers to Chad, US Air Force specialists trained to fly Predator reconnaissance zones, which will be used to search for the girls in northern Nigeria.

'Boko Haram Is an Evil Product of Hell'

Meanwhile, the terrorists are attacking churches, schools, police stations and military barracks. They attack and level villages with strike forces of up to 500 men. Most of their victims are Muslims. Some 375 were reportedly killed in an attack on the town of Gamboru in early May. The governor encountered angry citizens when he toured the devastated town. The entire world is worried about the kidnapped girls, "but no one is interested in our fate," the survivors complained. Politicians and public figures alike, from US First Lady Michelle Obama to Pope Francis I, have expressed their solidarity with the schoolgirls in a global online campaign.

In impoverished northern Nigeria, bombings have long been a regular occurrence. In a recent attack in Jos, a bomb ripped apart at least 118 people. In mid-April, 75 people died when a bomb exploded at a bus depot on the outskirts of Abuja. "Bodies, bodies everywhere," says an eyewitness who identifies himself as a member of the intelligence service. He is standing next to the bomb crater, now filled with rainwater. Only the steel skeleton of the bus depot is still standing. Boko Haram is bringing terror to the doorsteps of the powerful, creating growing anxiety in Abuja, he says.

The police and military are everywhere in the capital. Schools that can afford it install barbed wire fencing and post armed guards outside the gate. The driveway to the Holy Trinity Catholic Church in the Maitama district is closed to traffic, and there are soldiers patrolling the parking lot. Anyone entering the grounds is scanned with a metal detector.

"Let us pray for the girls from Chibok," the pastor, wearing a white chasuble, told the congregation on the Sunday before last. "Boko Haram is an evil product of hell, and its leader Abubakar Shekau is a devil," he said after the service.

'Shekau Is not an Islamic Leader'

Nigerian psychologists who have analyzed Shekau's video appearances consider him to be megalomaniacal. Sheikh Ahmed Gumi, a Muslim scholar, also condemns his crimes. "Anyone who abducts and forcibly converts innocent children cannot invoke our faith," he says. "Shekau is not an Islamic leader."

Last Thursday, activists with the #BringBackOurGirls campaign marched to the presidential mansion in Abuja to protest against the president. Yanga Gapani, 40, was one of the demonstrators on that day. A stocky man, he is wearing one of the bright red T-shirts handed out by the organizers. Gapani is from Chibok, and nine girls from his family are among the girls abducted by Boko Haram. He recites their names: Haratu, Ishaku, Esther… All are between the ages of 16 and 18.

Gapani, who works as a bookkeeper in the capital and has a regulated income, supported the girls financially and paid their tuition. When he last spoke on the phone with one of his nieces, a few weeks ago, she said imploringly: "Uncle, I need some sweets again."

"Our hearts are bleeding and our eyes are filled with tears," says Gapani, "but we will never give up hope." He recently saw the video in which the terrorists paraded 100 girls in gray hijabs, who had allegedly converted to Islam. When he scrutinized the faces, Gapani recognized his niece Tabitha, who was once such a happy girl.