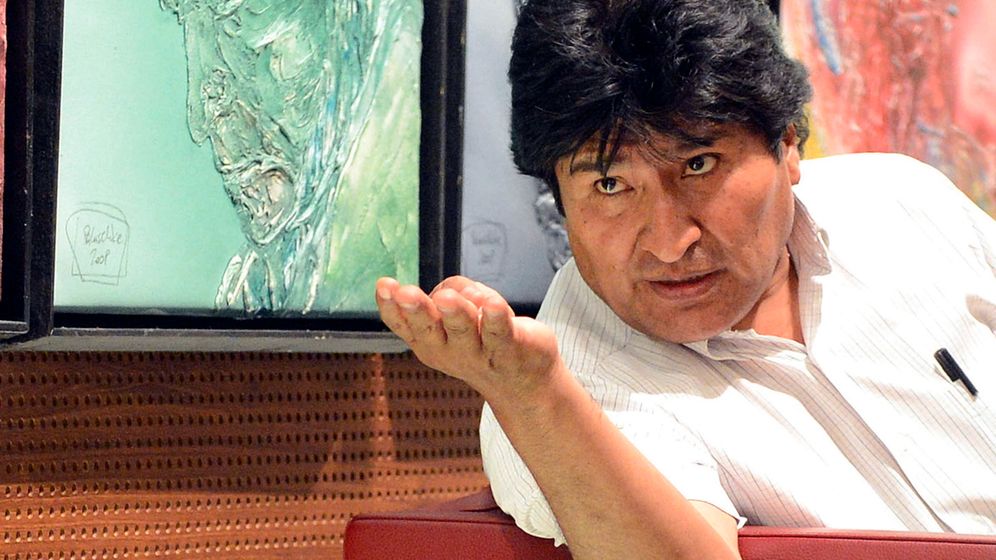 Bolivian President Evo Morales hadn't intended to spend Tuesday night enjoying the comforts of the VIP lounge in Vienna's international airport. But he apparently had little choice. Just after midnight, his government plane -- heading back to South America after attending an energy conference in Moscow -- was forced to land in the Austrian capital.

Morales resumed his flight home shortly before noon on Wednesday, but the incident is almost sure to have diplomatic repercussions. Bolivian officials are furious and several South American leaders have likewise voiced anger at the treatment meted out to the head of state.

"We don't know who invented this lie," Bolivian Foreign Minister David Choquehuanca told reporters in La Paz of the allegations that Snowden was on Morales' plane. "We want to denounce to the international community this injustice with the plane of President Evo Morales." The country's vice president, Alvaro Garcia, went even further in a midnight press conference in La Paz. He said that Morales had been "kidnapped by imperialism" in Europe.

Snowden is wanted by the United States for having revealed the degree to which the American intelligence agency NSA keeps tabs on international Internet traffic and telecommunications. Documents seen by SPIEGEL from Snowden's leak also showed that the US bugged European Union diplomatic missions in Washington, DC, and New York as well as installing electronic eavesdropping equipment in EU communications systems. Snowden, who is believe to still be in the transit area of the Moscow airport, applied for asylum in 21 countries on Tuesday. Many of those countries, including Germany, have denied his application.

According to initial reports, France, Portugal and Italy had denied Morales' plane overflight rights. Bolivia also said that Spain had offered to allow the plane to stop in the Canary Islands to refuel, but only on the condition that Spanish officials be allowed to inspect the plane. But on Wednesday morning, both France and Spain denied the claims, saying that the plane had permission to fly over their countries. There was no comment offered as to why Bolivia claimed otherwise.

It is also unclear why European countries would withdraw overflight rights, if indeed they did so. A European Commission spokeswoman on Wednesday said Brussels was still trying to figure out exactly what happened. She told Reuters that it is up to individual member states to make decisions about their airspace, but added: "At the moment it is not entirely clear what happened this morning, why the French and Portuguese decided to divert the flight."

South American leaders appear to be taking the incident seriously, with Ecuador and Argentina having called for an extraordinary meeting of the Union of South American Nations (UNASUR) to address the issue. The Venezuelan government added that it was a clear violation of the diplomatic immunity that all heads of state enjoy.

Bolivia too has not been shy about using aggressive rhetoric to voice its displeasure. The country's ambassador to the United Nations, Sacha Llorenti, said that Austria's decision to search the plane was an act of aggression and in violation of international law. He added that La Paz will be addressing the incident through United Nations channels. Llorenti added that he had no doubt that "the orders came from the United States" to force Morales' plane to land and suggested that the move had put the president's life at risk.

Bolivian Defense Minister Rubén Saavedra, who was also on board the plane, told journalists in Vienna that the forced landing was a "direct attack on the president."

Deputy Austrian Chancellor Michael Spindelegger said that Morales had agreed to an inspection of his plane on a voluntary basis. "Our colleagues from the airport had a look and can give assurances that no one is on board who is not a Bolivian citizen," he told reporters in Vienna. Austrian President Heinz Fischer went to the Vienna airport on Wednesday morning to meet with Morales. The pair gave an impromptu joint press conference.