Money talks, it seems -- even when it comes to such noble projects as promoting the use of renewable energy. In the end, Germany was no match for an oil-rich Arab state that was determined to host a new international agency to champion renewables. 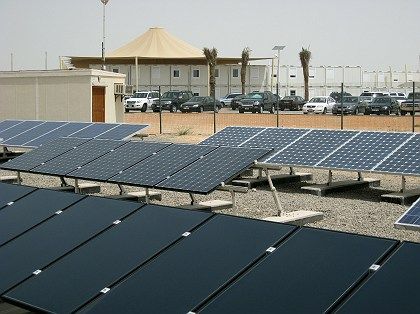 Solar panels in Masdar City: IRENA will have its headquarters in Abu Dhabi.

Germany lost out to the United Arab Emirates in the competition over which country would play host to the headquarters of the newly created International Renewable Energy Agency (IRENA). Another bid by Austria had long been seen as hopeless. On Monday the cities of Bonn and Vienna officially threw in the towel at a meeting of delegates from around 130 countries after it became clear that the cash-rich Gulf state was bound to prevail.

The new agency will now be located in Masadar City, a planned eco-city near Abu Dhabi that will be completely powered by renewable energy and which will have zero emissions. As compensation, Bonn will be the location for an IRENA innovation center and Vienna will host a liaison office for contacts with the United Nations and other international institutions. IRENA will advise governments on technical and financial issues linked to renewable energy and promote this kind of technology in developing countries.

UAE had offered generous financial support to secure the project. The emirates will fork out the estimated $136 million (€96 million) cost of establishing the center and will provide another $50 million (€35 million) for IRENA projects. The idea of oil sheiks spending money on renewable energy "has very great sex appeal," said a spokesperson for Danish Environment Minister Connie Hedegaard ahead of the vote in the Egyptian resort of Sharm el-Sheik.

Germany, in contrast, would have provided just €8 million ($11 million) a year to help run the center. The government in Berlin had pointed out that it was already spending €1 billion annually on sustainable energy in developing countries and is planning to invest more than €2.5 billion in development aid for renewable energies by 2014.

IRENA was founded by 75 states in Bonn in January. German Environment Minister Sigmar Gabriel had justified the campaign for it to be headquartered in the former German capital on the basis that it was "a German idea." However, on Monday Gabriel denied that Bonn was a loser, saying that the fact that IRENA was to be shared amongst the three cities was a "fair and proper compromise."

Nevertheless, Germany's failure to secure the agency headquarters was harshly criticized by the business-friendly Free Democratic Party (FDP). Michael Kauch, environment spokesman for the FDP's parliamentary group, told reporters that Gabriel had "botched" the decision, saying that the minister "couldn't gloss it over with an innovation center."

Kauch said the government should have insisted that Bonn would be the location of the agency when it was founded. He added that the fact that France and the United Kingdom had backed Abu Dhabi over Bonn was "a debacle for Germany's European policy."