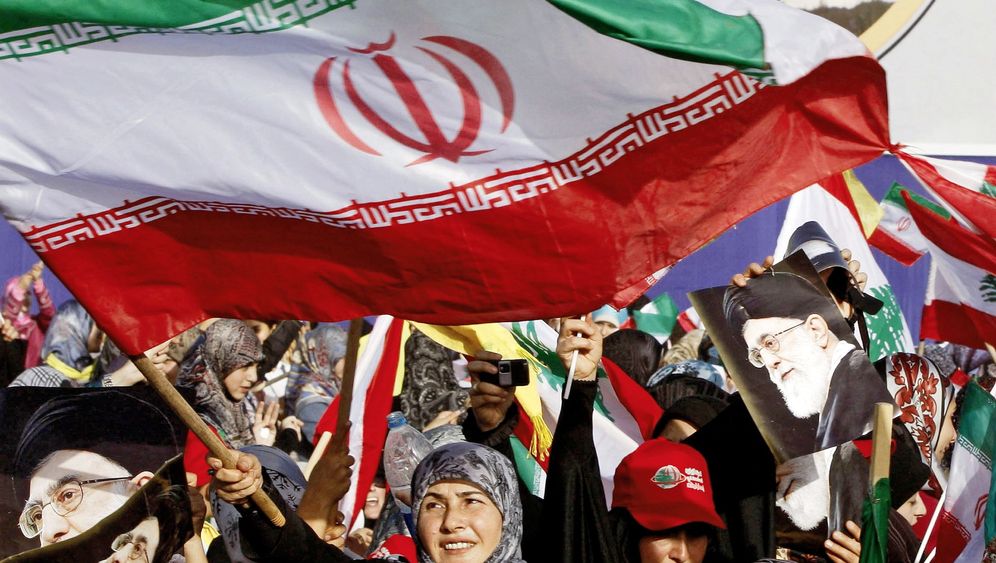 Accompanied by stirring synthesizer sounds, they sing about their Lebanese homeland -- and about "glorious martyrs" and the "bloodsucker America." "Hezbollah's boy group," as it is called in Lebanon, has achieved cult status in the southern, overwhelmingly Shiite districts of Beirut.

For weeks now, a new song by al-Wilaya has been booming from the loudspeakers of street cafés in southern Beirut -- a tune that the group has dedicated to Iranian President Mahmoud Ahmadinejad: "You noble knight from Persia, you pride of the nations."

For Hezbollah, which calls the shots in the neighborhood, this was just the right soundtrack for the Iranian president's state visit last week. Indeed, funds from Iran have been used to finance the construction of new buildings and streets, support war widows and create jobs in the sections of southern Beirut and southern Lebanon that Israeli fighter jets reduced to smoldering rubble in the summer of 2006.

"We love Ahmadinejad," says Fatima Kais, an old woman from the southern part of the country who has wrapped herself in an Iranian flag. "He protects us from the Zionists. We owe him our lives."

There was no mistaking the enthusiasm that gripped the vast majority of Shiites in Lebanon as they played host to the Iranian president. Ahmadinejad's two-day visit gave an enormous boost to what is the largest segment of Lebanon's population, which was, however, also the most marginalized group for many years. In particular, Hezbollah, whose name means "Party of God," is brimming with self-confidence. The organization's militia has long since recovered from the fighting with Israel four years ago and once again boasts a well-filled arsenal of rockets.

"Even if Hezbollah is perhaps nothing more than a plaything of the Iranians, the Lebanese Shiites are enjoying finally being recognized as the strongest voice in the country," says Beirut political scientist Hilal Khashan. His colleague Raghid al-Sulh even maintains that Hezbollah is the "strongest political party in Lebanon of all time."

Not everyone agrees, however. According to Shiite publisher and filmmaker Lokman Slim, 48, such claims apply at most only to the organization's military wing. "The world unrelentingly overestimates Hezbollah as a parliamentary force," he says.

Slim is one of the harshest critics of Hezbollah, making him a kind of tolerated dissident who lives with his German wife right in the heart of the Hezbollah stronghold of Dahiya in southern Beirut. High walls surround the family's white villa, which enjoys a special status in the neighborhood. Outside, Hezbollah's omnipresent civil security forces have rigorously enforced a ban on alcohol, surveillance cameras are installed on buildings, and bearded men patrol on motorcycles. In the garden behind his house, though, Slim likes to pour a glass of wine for his guests and poke fun at the "fascist social control" of the Party of God.

"If there were truly free elections in Lebanon, which were not based on religious proportional representation, group pressure and corruption, Hezbollah would certainly not be the strongest party among the Shiites," he believes. But he says that there is absolutely no question about the pride that people feel concerning Hezbollah's military resistance to Israel.

In his opinion, this newfound popularity has pushed back indefinitely the militia's disarmament, which international organizations and members of pro-Western parties in Lebanon have been urging for years. "Nobody's talking about that anymore -- nobody believes it anymore," Slim says.

The Sunni and Christian opponents of the Shiite organization have not forgotten May 2008, when street clashes between Hezbollah fighters and government supporters came close to sparking a new civil war.

The conflict was triggered by the government's attempt to bring Hezbollah's special telephone network under state control -- a move that the Party of God saw as an attack on its vital interests. Since then, pro-Western forces in the country have tended to refrain from openly criticizing the Shiite militia.

Still, there is a threat of renewed unrest. In just a few weeks, the United Nations' Special Tribunal for Lebanon will announce in The Hague whether members of the militia will be charged with the murder of former Prime Minister Rafik Hariri.

This prompted Prime Minister Saad Hariri, Rafik Hariri's son and political heir, to try to appease Hezbollah. The younger Hariri vowed that he would never endorse such charges.