For years, the waters just off the coast of the Gaza Strip have been relatively quiet. Ever since Israel imposed an air, land and sea blockade on the region following the ascent of Hamas to power in 2007, fewer and fewer visitors have risked the trip. Even the local fishing industry has suffered mightily.

Now, though, a little over a week after the Israeli raid on an aid flotilla bound for Gaza City -- an operation which resulted in 9 dead and global condemnation of Israel -- sea-going traffic looks as though it might soon pick up. Several groups have threatened to send ships to test the Israeli blockade, among them a group of Jewish activists based in Germany.

"We want to break the Gaza occupation and end the occupation of the West Bank as well," Kate Katzenstein-Leiterer, a member of the executive committee of the European Jews for a Just Peace, which is organizing the mission, told SPIEGEL ONLINE. "We as Jews want to bring the Palestinians something other than bombs."

She says that between eight and 16 people will be on board the boat, which plans to sail in mid-July. The ship, whose current location in the Mediterranean is being kept secret, will be carrying school supplies, musical instruments, children's clothing and "stuff for children that Israel has forbidden, such as sweets and chocolates."

The idea for the project is not new. The group, made up of pro-Palestinian Jews in Germany and around Europe, began collecting funds for their mission in 2008. But the Israeli raid on a flotilla of aid ships early last week has increased both interest in the project and the likelihood that it will become a reality. Donations, says Katzenstein-Leiterer, have been flooding in since the May 31 raid.

It has also, however, demonstrated that such a mission could be dangerous. "Because of what happened, we are quite concerned," said Katzenstein-Leiterer. "We are afraid that we too could become involved in a clash, which we don't want. We will not use violence."

Still, by the time they arrive in the waters off the coast of the Gaza Strip, there is reason to believe that Israeli patience toward attempts at breaking the Gaza blockade may have worn thin. In addition to the German-Jewish group, others have also indicated their interest in sending ships to the Gaza Strip. The Iranian government announced Monday it would send two ships, loaded with humanitarian goods from the Iranian Red Crescent, to Gaza this summer. The head of Iran's Islamic Revolutionary Guard Corps said that the Iranian navy is prepared to escort the ships. Turkey -- whose foreign minister Ahmet Davutoglu recently called the Israeli operation "Turkey's September 11" -- has also indicated its interest in sending more ships to Gaza in the near future.

Israel has vowed to continue its blockade of the Gaza Strip, reiterating its concern that Iran, in particular, seeks to smuggle weapons and munitions to the Islamist militants of Hamas. Still, Israeli officials said on Wednesday that the country was expanding the list of food items being allowed into the territory, the first small sign that Israel wishes to calm global nerves frayed by the raid.

Additionally the National Union of Israeli Students is hoping to be able to send 300 yachts and two ships toward Turkey with the aim of intercepting any additional aid ships and engaging them in dialogue.

"We will tell them that if they want to help Gaza's residents, we will be happy to deliver their aid," reads the group's press release. "We would also like to (discuss) the Armenian issue and the problem of the Kurdish minority in Turkey."

European Jews for a Just Peace, for their part, are also interested in dialogue and have twice tried contacting the Israeli Embassy in Berlin to discuss their impending aid shipment. So far, says Katzenstein-Leiterer, they haven't received a response. 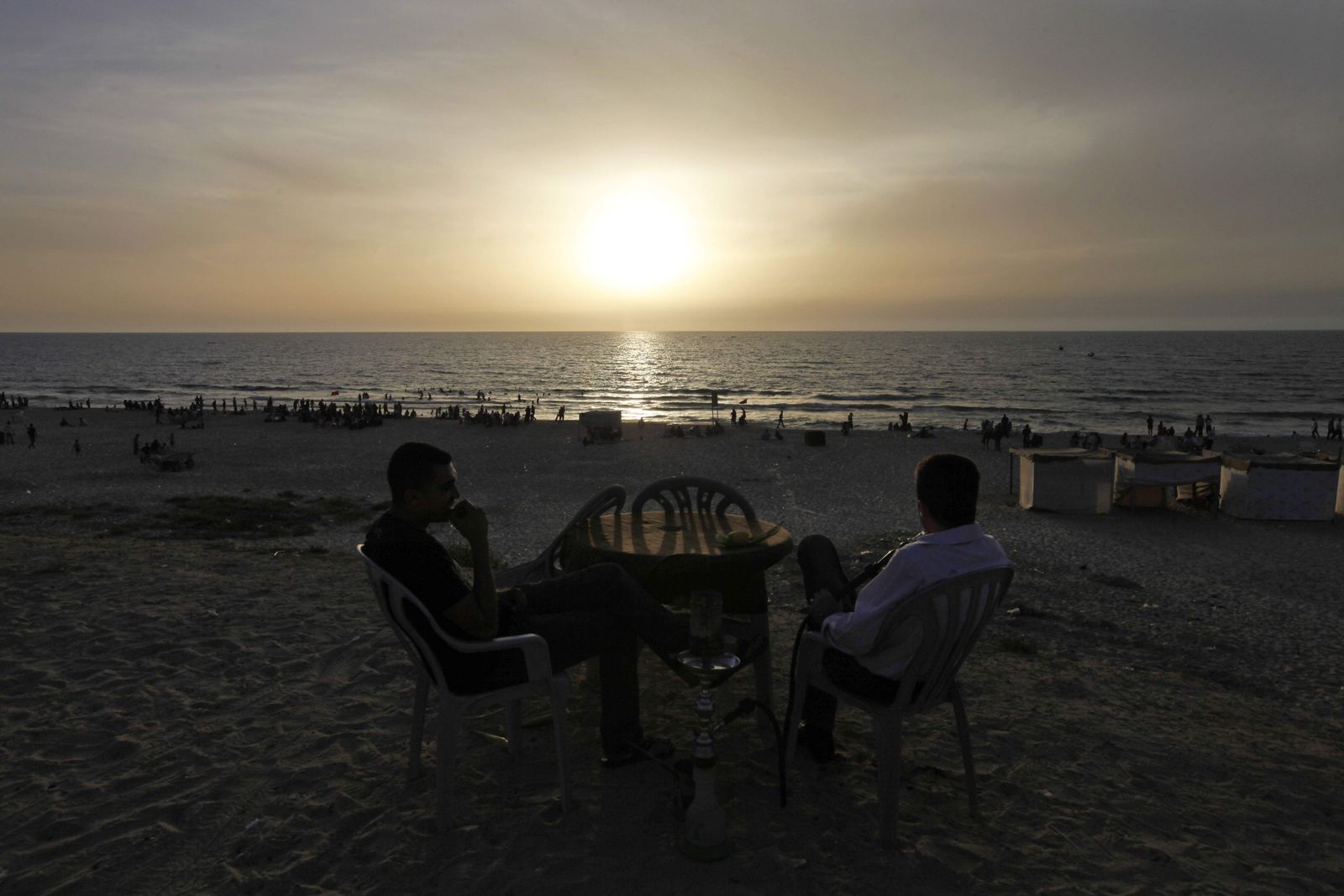 Palestinians enjoying a water pipe while looking out into the Mediterranean Sea. The waters off the Gaza Strip could get busy this summer.