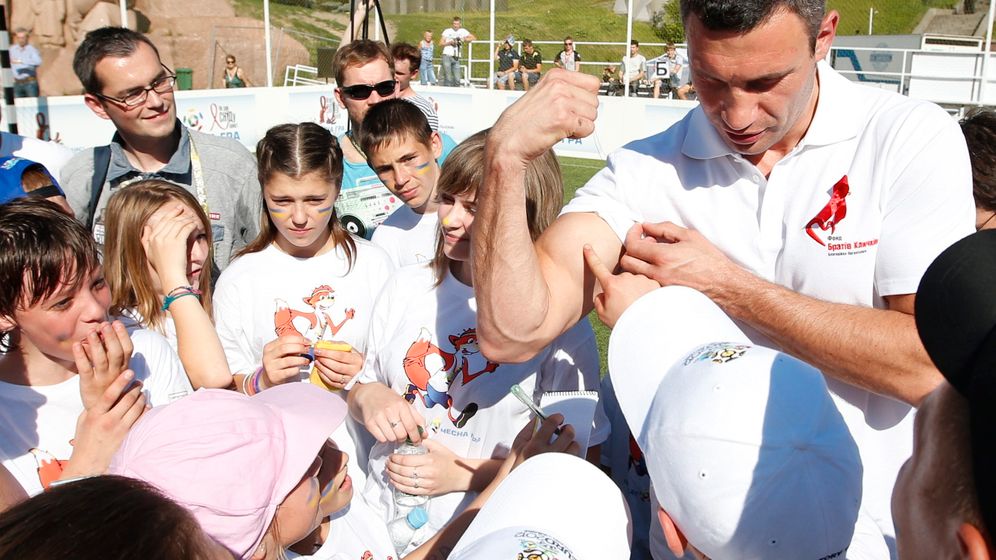 A black Toyota Land Cruiser with tinted windows stops in front of the radio station in Cherkasy, 160 kilometers (100 miles) southeast of the Ukrainian capital Kiev, on the right bank of the Dnieper River. Vitali Klitschko, a boxer who is also a politician, gets out and hurries into the station. It's shortly before 10 a.m. on a Thursday in June. Klitschko is running 15 minutes late because he wanted to first have breakfast. He doesn't like to fight for votes on an empty stomach.

On the way to Cherkasy, Klitschko drove 150 kilometers an hour (93 miles per hour) in a 90-kilometer speed zone, but now that he's here he sits behind the microphone as a picture of calm. No, he says, his party isn't a fan club. And yes, Ukraine will become a democratic country, based on Western standards. His press secretary gives him an encouraging nod.

The radio interview ends after 24 minutes, and Klitschko poses for a photo with the host before rushing out the door again. Time is tight.

Klitschko, who was born in 1971 in the former Soviet republic of Kyrgyzstan but grew up in Kiev, is campaigning for a seat in the Ukrainian parliament. With elections in October, he has so far visited seven of the country's provinces since May to win over voters. This campaign trip, his eighth, is scheduled for two days. There are 24 items on his schedule today, in addition to the driving. The radio station interview was item four.

Item seven takes him to the local news agency. He walks through a kitchen into a room with closed blinds and turquoise walls to prepare for a press conference at 10:45 a.m. Klitschko quickly throws on a suit jacket while his two bodyguards stand at the door.

Five photographers, a camera team and 17 reporters are there. Klitschko sits in the front, eyeing them the way he does his opponents in the ring: motionless, his eyes narrowed into two slits. This slugfest begins without the sound of a gong. A journalist wants to know what Klitschko has to say about the accusation that his party's candidate list also includes criminals.

"It's a rumor," Klitschko replies, stabbing the air with his index finger as he asks the reporter to give him the names of the people he is referring to.

Is he even an opposition candidate, someone asks? Or isn't he really working for the president, Viktor Yanukovich?

"I've never been a puppet. Of anyone." He keeps up his guard. A short time later, Klitschko is back in his car again.

In the boxing ring, Klitschko won 44 of 46 professional fights, 40 of them knockouts, earning him the title of World Boxing Council's current heavyweight champion. As the only world heavyweight champion with a PhD, he is also someone who knows how to take blows, patiently waiting until he can deliver the decisive punch. Not a bad trait for a politician.

Klitschko is the chairman of the UDAR, or "STRIKE" Party, which he founded just over two years ago. Current polls place the party at up to 15 percent of the vote, which would make it the third-strongest party in Ukraine. Klitschko is also the promotional ambassador and a member of the organizing committee for the 2012 European Football Championship being held in Ukraine and Poland. With the final game set to be played in Kiev on Sunday, Klitschko has yet to attend a single match. His campaign is more important to him. He says that wants to tie Ukraine to Europe, leading it to better times. The campaign is his toughest fight yet.

Klitschko winds his way through Cherkasy on his way to appointment number nine, from noon to 1 p.m. The Land Cruiser passes a sign depicting opposition leader Yulia Tymoshenko, who Yanukovich had thrown in prison on charges now pending appeal. Klitschko wants to form a coalition with her party in the fall.

When he reaches Hope Square to dedicate a playground, he's greeted by about 400 people, many of them children. Balloons bob up and down in the air. "Good boy!" an old man shouts. Klitschko takes off his jacket and rolls up his sleeves.

Klitschko has already paid for the construction of 101 playgrounds in Ukraine. He says that he doesn't want to see children loitering on the streets. He lifts a boy wearing boxing gloves onto his shoulders. "Do you want to be strong?" he asks the crowd.

"Do you want to be world champions!"

"Then you should be good kids, eat your porridge and listen to your parents. That's what I was like." Klitschko isn't a brilliant speaker, but rather someone who knows what people want to hear. He's a little like former German Chancellor Gerhard Schröder, but with bigger biceps.

Campaigning in the Countryside

As a boxer, Klitschko avoids close punches, preferring to throw blows from a safe distance. As a politician, however, he tries to get closer to people on the ground. He rarely spends time in Kiev, where festivals overflowing with national pride now take place at every intersection, with little yellow-and-blue flags fluttering in the breeze, bands playing and choirs singing.

Klitschko spends much of his time in the countryside, because he hopes to capture more votes there. In his speeches, he says that any goal is within reach, as long as the will is there. "No victory without a fight" is one of his typical slogans. One in 12 people in Ukraine is out of work, and almost one in four suffers from poverty. Klitschko's voters tend to be young, socioeconomically disadvantaged people.

During lunch, item 11 on the day's agenda in Cherkasy, he wolfs down a salad, soup and chicken kebab. Then he makes calls on two mobile phones, wearing a headset. He switches from English to Russian to Ukrainian, a language he has only perfected in the last few years. Before long, he's on his way again.

Item 13: A round-table discussion with bloggers, teachers and civil rights activists. One of the participants says: "Corruption is the political AIDS of Ukraine." Everyone nods. Item 15: A meeting with party activists from the region -- female students in short skirts and men in cheap suits. "There are no oligarchs behind us," says Klitschko. "We're the new party." He talks about change and principles and freedom. The audience applauds.

'My Heart Beats for Ukraine'

Then he pauses in a small office to catch his breath. By now, Klitschko looks as if he has just finished the eighth round. He is pale, he's sweating and breathing heavily, the sides of his mouth are hanging down, and there are scabs on his knuckles. He says that politics in Ukraine is tougher than boxing, because it's a fight without rules.

Photos circulating on the Internet show him arm in arm with a man with a shaved head, the mafia boss Viktor Rybalko, who was killed in Kiev in 2005. As the story goes, Klitschko worked for him as a debt collector in the 1990s. Klitschko says it's only a photo, and that he's been photographed with countless people. He doesn't let that sort of thing get him down, he adds, pointing out that it took him 14 years to become world champion.

"When I hear that Ukraine is a Third World country, it hurts," says Klitschko. "I really love Germany (where Klitschko has lived for years in addition to residing in Kiev), but I'm not German. Germany adopted me, but my heart beats for Ukraine."

There are pieces of real estate in Kiev that are more expensive than property in Beverly Hills, he says, and there are Bentleys and Rolls-Royces in the parking lot at the parliament building. "These politicians thrive on corruption."

Klitschko owes the fact that he is taken seriously as a politician to his popularity as an athlete. His party, with its 12,000 members, may not be a fan club, but Klitschko is its only face. He is seen as an alternative to the old political elite, as an honest soul, and a man who earned his fame cleanly. He has enough money to be able to afford moral principles and is more interested in Ukraine's wellbeing than his own.

A white panel van has been cruising around Cherkasy all day long, broadcasting the announcement of a rally through loudspeakers: 5:30 p.m., Theater Square. It's item 17 on Klitschko's list.

About 1,000 people have turned out, more men than women. The sun is blazing as Klitschko stands on the stage, clenching his fist as he speaks. He speaks without notes, talking about the day he was sitting in the kitchen with his fellow students when he was a boy, watching Mike Tyson fight on TV. He talks about how he said that he too would be world champion one day, about how they laughed at him and how, when he did become a champion, he went to visit the boys who had teased him long ago and held the world champion's belt under their noses.

"Everything is possible," he says. "Poland did it. So did the Czech Republic, Slovakia and even Croatia."

What does he intend to do about the police, the prosecutors and the judges, a woman asks?

"Shoot them!" someone shouts.

As a boxer Klitschko knows how to keep his cool. He says: "The solution is called lustration." Government employees would have to be reviewed and removed from office, if necessary, he explains. But the desire alone isn't enough, he says. "I need the support of the people, and only then can I make it. I need you."

"If we vote for you, will you stay the course until the end? Or will you give up first?" It's an allusion to Viktor Yushchenko, the winner of the Orange Revolution.

It isn't clear whether Klitschko will succeed with his strategy, in a country where the government locks up bothersome politicians and manipulates elections, a country where female trafficking is flourishing and the police use torture. Klitschko has run for mayor of Kiev twice and lost both times.

Agenda item 24: Checking into the hotel. At 9:30 p.m, it's the end of a long day for Klitschko. He watches soccer on TV. Portugal beats the Czech Republic 1:0, entering the semifinals. A hard-earned victory, the kind of victory Klitschko also hopes to achieve at the end of his campaign. 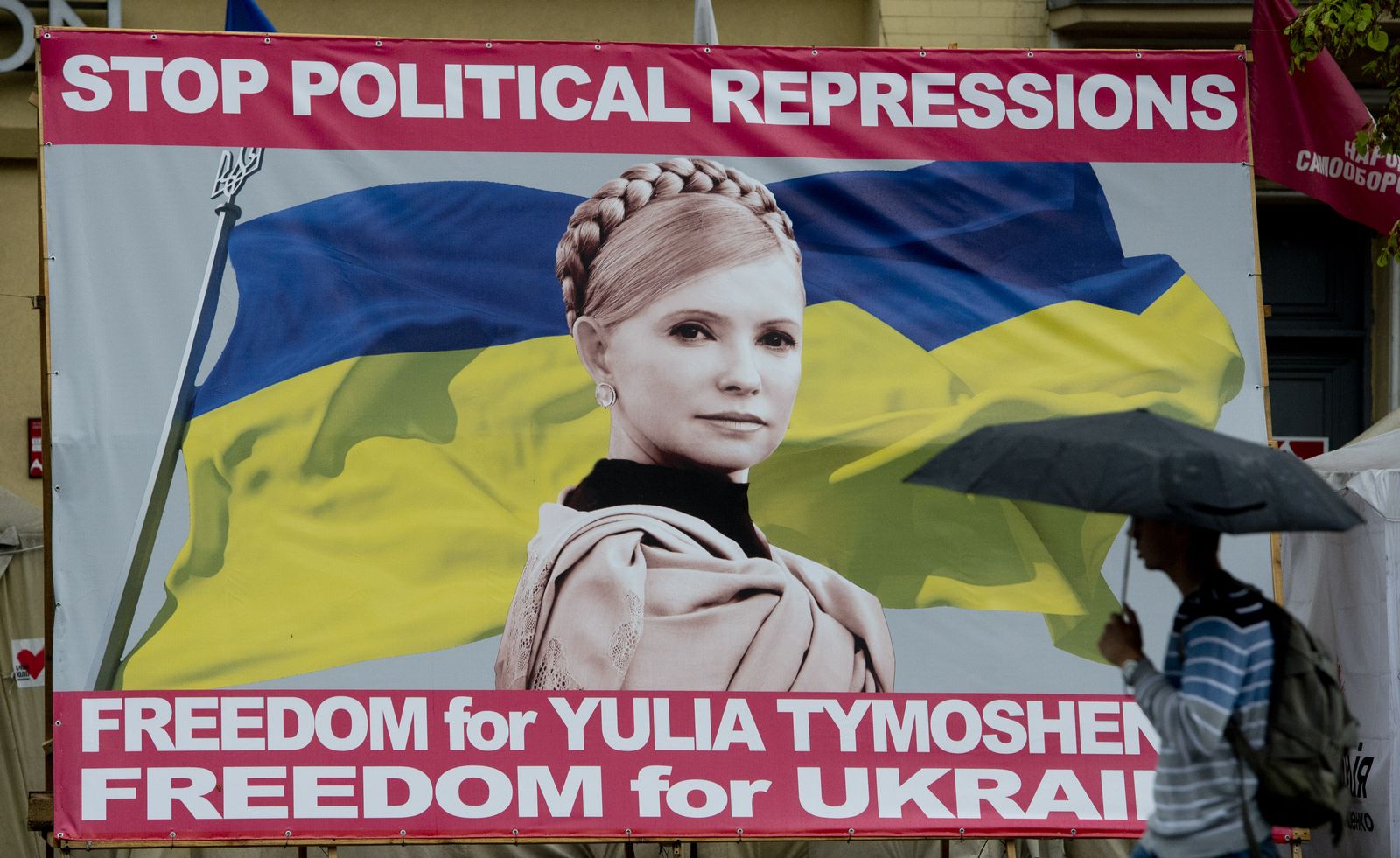 If he is elected, Klitschko says he would like his party to form a coalition with that of Julia Tymoshenko, who is currently serving time in prison after being convicted for abuse of her power. The conviction has been widely criticized by Western governments, including that of Germany.