The women had dressed up for the special evening. The wife and two daughters of Ilham Aliyev, the president of Azerbaijan, were awaiting the arrival of Lynne Cheney, the wife of then-US Vice President Dick Cheney. She had accompanied her husband on a state visit to the country in September 2008 -- and it was time for the evening meal.

Bodyguards and diplomats from the US Embassy in the capital Baku were also waiting for the guests. They wanted to keep an eye on Aliyev's family -- particularly the influential first lady, Mehriban. But which of the three women was she?

Mehriban and her daughters, the Americans knew, are very fashion-conscious and don't shy away from a bit of provocative evening wear. Making things more difficult, US diplomats noted, was the fact that Azerbaijan's first lady is thought to have undergone cosmetic surgery more than once. Since then, they note in a dispatch to Washington, she looks quite a bit younger, but can hardly move her face. Finally, one said: "Well, logically the mother would probably stand in the middle."

The account of the encounter is included in a secret memo from the US Embassy in Baku -- and reads like a sarcastic description from US diplomats who feel like they are stranded in some banana republic in the middle of nowhere.

A New Chapter in the Great Game

But the reality is very different. Azerbaijan, which lies in the Caspian basin and has a population of 9 million, is one of the US's strategic energy partners, despite being located within Russia's sphere of influence. The country boasts proven energy reserves of roughly 7 billion barrels of oil and 1.3 trillion cubic meters of natural gas. Millions of barrels of these natural resources flow to the West each year via a pipeline connecting the Azerbaijani capital with Ceyhan, a Turkish port on the Mediterranean Sea.

The Cheneys were in Baku to befriend the Aliyevs in exactly the same way that Richard Morningstar, US special envoy for Caspian energy development, has been doing in the Obama era. Morningstar already served under former President Bill Clinton, who recognized Azerbaijan's strategic importance back in the 1990s. Morningstar helped shape the vision of the €2.5 billion ($3.4 billion) Baku-Ceyhan pipeline. The Americans even sent experts to show the Azerbaijanis how to protect, for example, the underwater sections of the expensive pipeline from saboteurs.

The "Great Game" is what the 19th century battle between the British and the Russians over Central Asian influence was called. These days, the Americans are also on the frontlines of this battle -- and the potential rewards are much larger. Unfortunately, as the State Department's classified documents make clear, the price that American diplomats have to pay is also much greater.

Like the other oil-producing countries around the Caspian Sea, Azerbaijan is an embarrassing partner to have. The country's corrupt institutions are unable to deal with the oil boom and the billions of dollars it brings into the county, while the average annual growth rate of almost 15 percent is a much higher priority than enforcing and improving law and order. Independent media outlets are restricted, and dissidents are violently suppressed. Shortly before his death, Heydar Aliyev, the dictator who ruled Azerbaijan from 1993 to 2003, naturally handed over power to his son Ilham, who does things exactly the way his father did.

The American documents leave no doubt that the diplomats know exactly who they are courting. Cables bear titles like "Who owns what?" in which they provide portraits of the country's most powerful families. "Observers in Baku often note that today's Azerbaijan is run in a manner similar to the feudalism found in Europe during the Middle Ages," one such cable reads. "A handful of well-connected families control certain geographic areas, as well as certain sectors of the economy."

The memo continues: "By and large, this seems to be the case, with general agreement among leading families to divide the spoils and not disturb one another's areas of business or geographic control. The families also collude ... to keep out foreign competitors."

Naturally, the best off is the ruling Aliyev family. Although the American diplomats write that the first lady, Mehridan Aliyeva, is "poorly informed about political issues, they report that she is very powerful when it comes to providing for members of her own family. For example, her sister Nargis serves as head of the satellite campus of Lomonosov Moscow State University in Baku, her father is the director of the country's National Academy of Aviation and her uncle is the deputy foreign minister.

Nar Mobile/Azerfon, one of the country's largest wireless communication companies, belongs to the Aliyev family's business empire. The company just happens to have received the only license to operate modern high-speed cell-phone networks in Azerbaijan -- effectively a license to print money. Its rival Azercell lost out in the bidding process. And when Azercell tried to defend itself on a separate matter, Nar Mobile/Azerfon took it to court -- where, of course, it promptly won the case.

"It is often said mockingly that in Azerbaijan's judicial system, one can only win a case if one is friends with the judge," writes one American diplomat, "or if introduced by Benjamin Franklin" -- a reference to the US founding father's likeness on the $100 bill.

Of course, the diplomats say, it is equally advantageous to be well-connected politically -- particularly when it comes to the lucrative construction industry. Western experts know that not much gets built in Azerbaijan without a "kryscha" ("roof") -- protection provided by organized crime. The company Pasha Construction, which also belongs to the Aliyevs' business empire, naturally has the best protection available. Buildings constructed by Pasha usually go up quickly and with few hindrances; their competitors, on the other hand, often face hurdles. Pasha, not surprisingly, has few concerns about its bottom line.

But the Aliyevs are generous, and let other families rake it in as well. Take the Heydarovs, for example. The family's patriarch, Kamaladdin, was appointed head of the national customs committee -- considered extremely corrupt even by Azerbaijani standards -- "at the ripe old age of 35," as the America diplomats sarcastically note.

Kamaladdin, though, is not short on excellent references: His father, Fattah, was a close confidant of the elder Aliyev. And when the American chargé d'affaires met the younger Heydarov for the first time, he noted how his chest was covered with metals and decorations "that would rival the US Chairman of the Joint Chiefs of Staff."

The Tragedy of Oil

Heydarov's sons apparently enjoy their power and wealth to the fullest. One section about them in a secret memo on Heydarov even bears the title "His Boys and Their Toys." The Heydarov sons already own a soccer club and are supposedly trying to buy two American Gulfstream jets at €20 million each.

To do so, according to new American anti-terror regulations, they will have to prove that they acquired their wealth by lawful means. The requirement proved unproblematic: They simply sent a long list of their family's investment holdings to Gulfstream. According to these documents, the family is involved in a wide variety of industries -- including concrete, asphalt, chemicals, textiles, dairy products, alcohol and construction -- as well as a few smaller things on the side, such as a de facto monopoly on pomegranate juice.

While a few Azerbaijani clans are getting richer and richer, thanks to all the dollars pouring into the country, the rest of the population is barely scraping by. Over 40 percent of the country's inhabitants are living in poverty; the average monthly income is just €24. As Lala Shevkat, the leader of the Liberal Party of Azerbaijan, says: "Oil is our tragedy."

The Americans, however, have not let such problems frighten them away. On the contrary, they are even pushing for greater cooperation on security. Following the visit of an American envoy to Baku, one diplomat noted with satisfaction that he "underscored to President Aliyev the value that the US government attached to the relationship with Azerbaijan." 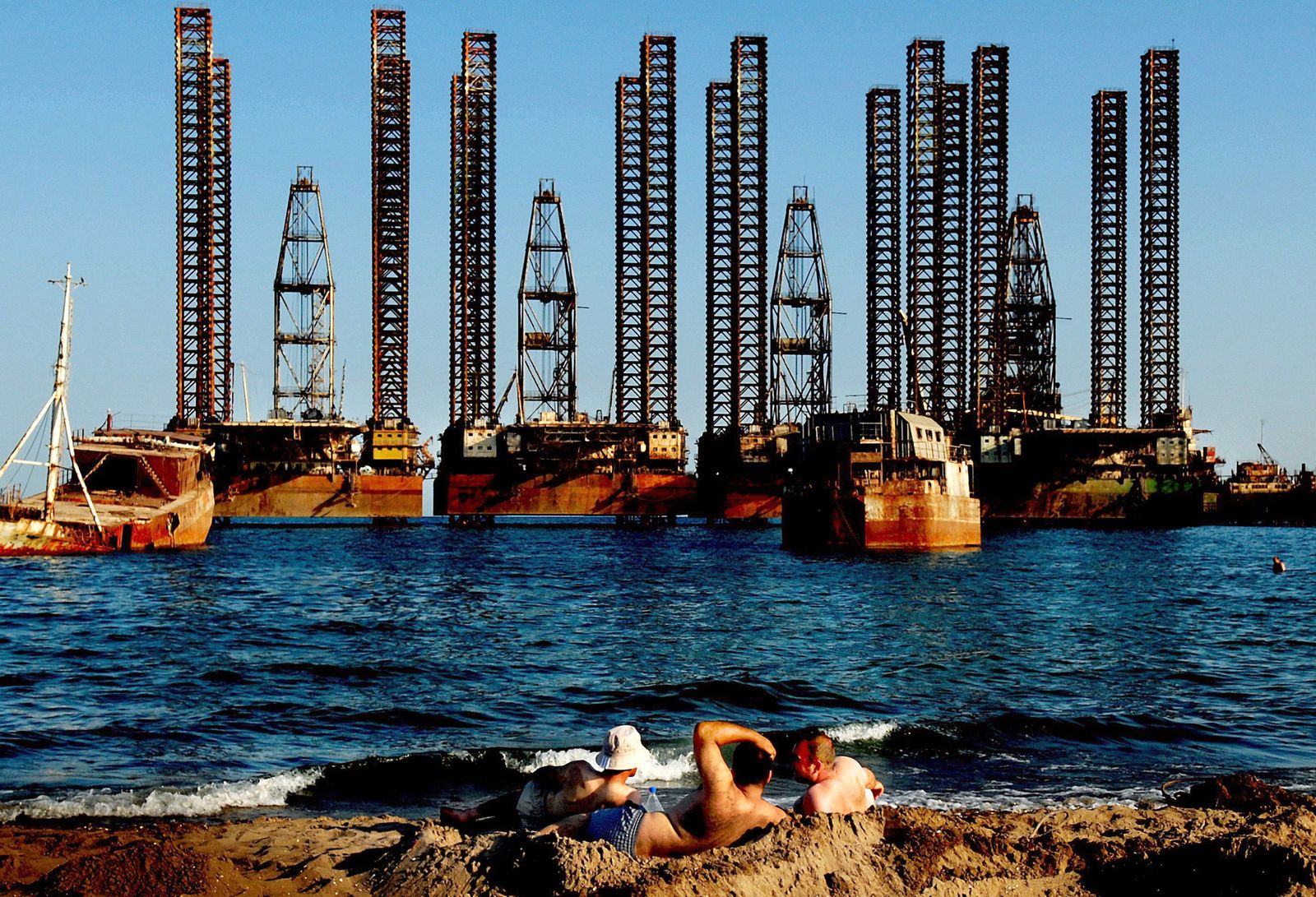 Oil workers in Azerbaijan catching a few rays on the shore near Baku.