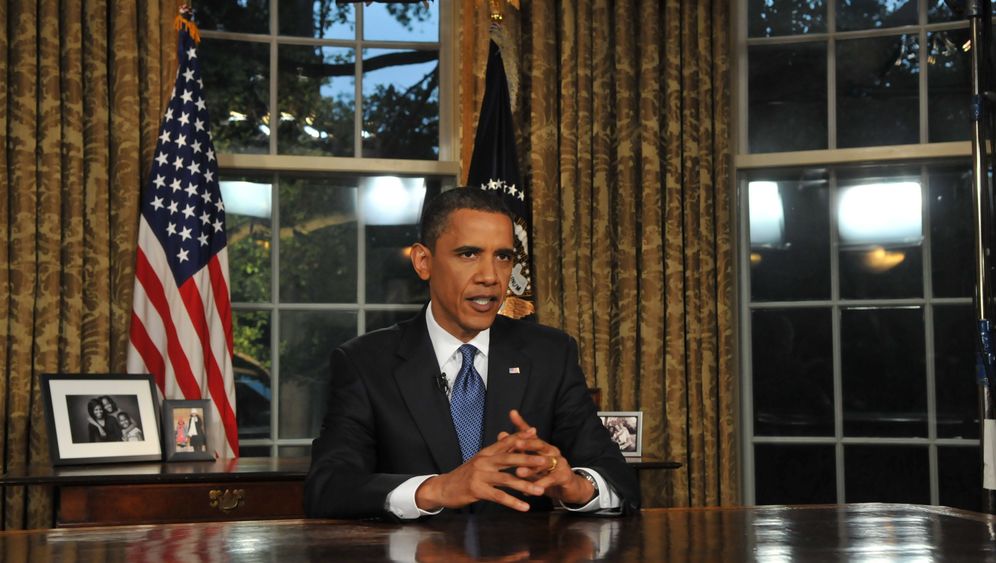 For the engineers, it was a blessing in disguise. They had drilled to a depth of up to 3,500 meters (11,500 feet) below the sea floor when gas and oil suddenly began shooting upward. But there was no explosion. The 69 workers at the site were evacuated and no one was killed.

It was the morning of Aug. 21, 2009, when engineers lost control of the well beneath the West Atlas oil rig in the Timor Sea off Australia's northern coast. It took 10 weeks to stop the flow of oil. By that time, about 4,300 tons of oil had flowed into the sea. It was only by drilling a so-called relief well that the Thai company overseeing the operation managed to pump enough mud into the well to cap the flow of oil.

For the BP engineers attempting to stop the out-of-control well still gushing oil into the Gulf of Mexico following the explosion of the Deepwater Horizon oil rig on April 20, the relief well method -- so-called "bottom kill" -- is also seen as the last solution available. The company began drilling the two relief wells in May, and BP CEO Tony Hayward says that he is confident that "the relief wells ultimately will be successful." He expects that the spill in the Macondo oil field will finally be capped by early August.

Hayward's forecasts, however, have not always proven to be reliable and independent experts warn that relief wells, like any well, are not without risk. "More oil could leak than before, because the field is being drilled into again," says Fred Aminzadeh, a geophysicist at the University of Southern California. Ira Leifer, a geochemist at the University of California in Santa Barbara, voices similar concerns: "In the worst case, we would suddenly be dealing with two spills, and we'd have twice the problem."

Leifer is a member of a team of experts deployed by US President Barack Obama to estimate the volume of oil currently flowing in the Gulf of Mexico. Just last week, the scientists almost doubled their estimate and now say that between 25,000 and 30,000 barrels of oil a day is gushing out of the well into the Gulf of Mexico. On Tuesday, they once again upped their estimate -- to between 35,000 and 60,000 barrels per day.

BP's most recent efforts to stop the flow of oil have only made the situation worse, says Leifer. The engineers' attempt to seal off the well from above, using a method known as "top kill," failed and only enlarged the borehole, according to Leifer. Now, he adds, there is almost nothing stopping the oil from flowing out of the well.

Most experts now believe that the relief wells, despite the risks, are the only option left. The principle of the method sounds simple enough. The engineers start by drilling vertically, and then diagonally toward the out-of-control well. Once they've reached the well, they drill into it from the side and pump large amounts of mud into it. The material fills up the well from below and eventually acts as a plug. In the end the well, like a decayed tooth, is capped with cement.

As straightforward as it sounds, this approach has not always been easy to implement in the past. The disaster in the Timor Sea, for example, ended in a debacle. It took engineer five tries to even find the borehole under the sea floor. Shortly before the end, the West Atlas oilrig went up in flames, after all.

Another case is also a warning sign for BP. In June 1979, engineers with the Mexican oil company Pemex lost control of the Ixtox I, an exploratory well in the Gulf of Mexico. Just as BP is now attempting to do, engineers at the time drilled two relief wells.

The first relief well was finished by the end of November, but it took until March 1980, more than nine months after the accident, to cap the well. By then, 480,000 tons of crude had flowed into the Gulf, the second-biggest oil spill the world has seen to date.

Is history repeating itself? The spill in the Macondo oil field could also continue to gush uncontrollably well beyond BP's August deadline. Pemex Director Carlos Morales, currently providing BP with technical advice, expects the spill to continue for another "four to five months." Leifer also believes that the disaster on the sea floor could drag on "until late fall."

Although the BP engineers have already completed two-thirds of the first relief well, it is extremely difficult to find the out-of-control well in the middle of the bedrock, says David Rensink, incoming president of the American Association of Petroleum Geologists.

Instead, the engineers will presumably have to repeatedly pull back the drill head to adjust the direction, Rensink predicts. "If they get it on the first three or four shots, they'd be very lucky."

Rensink is particularly concerned that BP, in drilling the relief wells, will penetrate into precisely those rock formations in which extreme pressure and temperature conditions facilitated the April blowout in the first place. Gas bubbles and gushing oil from the depths are real possibilities. "Any relief well has to be drilled more cautiously than the original well," warns Donal Van Nieuwenhuise, a geologist at the University of Houston. "You don't want to experience the same disaster a second time."

Still, most geologists are confident that the bottom kill method will ultimately be successful. Van Nieuwenhuise says he has never seen the method fail entirely and points out that BP has ultra-modern drill bits bristling with sensors scanning the bedrock. Furthermore, the bits can quickly change direction. Once the stricken well is found, the drilling mud that will be pumped in is heavy enough to stop even the most high-pressure oil flows. Rensink too believes that the relief well method will eventually plug the leak. "The question is only when exactly that will happen," he says.

Indeed, the engineers aren't only facing a formidable technical challenge. Weather will also play a significant role. Forecasters have already predicted that this hurricane season, which began this month, could be one of the most active on record. Drilling would have to be ceased for the duration of each strong storm.