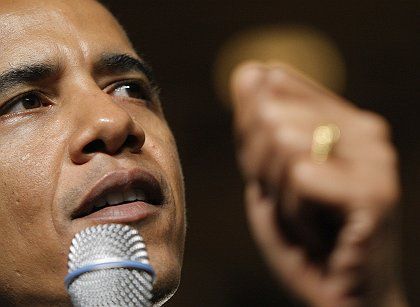 Democratic presidential candidate Barack Obama is looking for a place to speak in Berlin.

Barack Obama's campaign team has responded to Angela Merkel's apparent discomfort over his bid to hold a speech at the Brandenburg Gate in Berlin. A spokesman for the chancellor said his choice to hold the speech at the historic setting was "odd" and that Merkel has "little sympathy for the Brandenburg Gate being used for electioneering and has expressed her doubts about the idea." But Obama's planners are still pushing ahead as they prepare the visit in less than two weeks' time.

"Senator Obama looks forward to his visit to Germany and his opportunity to meet with the chancellor," Obama spokesman Bill Burton told the Associated Press on Wednesday He has considered several sites for a possible speech, and he will choose one that makes the most sense for him and his German hosts."

A number of locations are being considered for the keynote speech on trans-Atlantic relations. Sources have told SPIEGEL ONLINE that a number of Berlin organizations have offered to host Obama for his July 24 address in Berlin.

On Wednesday, German government spokesman Thomas Steg, speaking on behalf of Merkel, said that events at the Brandenburg Gate have always been non-partisan in the past. "This kind of electioneering abroad is unusual," Steg said, noting that an Obama appearance at the historically significant Brandenburg Gate would also likely trigger a debate back in the United States.

Ultimately, the decision on whether Obama can speak at the Brandenburg Gate will be made by the government of the city of Berlin. According to report in the Friday edition of the Hannoverschen Neuen Presse newspaper, city officials in Berlin's Mitte district have reserved the Brandenburg Gate for the Democratic Party politician on July 24. Mayor Klaus Wowereit has also expressed his support for using the site for Obama's speech.

Although Obama is unlikely to cancel his trip to Berlin as a result of the debate, the controversy could spur him to make changes to his schedule. It also conceivable that he could give a more modest speech in Berlin without the Brandenburg Gate as his backdrop.

For their part, Obama's advisors must be finding the debate playing out in Berlin a bit "odd," too. After all, the campaign has been the only thing his strategists have had in mind as he has made public appearances over the last 18 months. And that's also true of his Republican rival John McCain. When McCain travelled to Colombia last week, the government there shared with him the minute details of the freeing of hostage Ingrid Betancourt -- and they also helped to assure that his appearance came off as very presidential. Besides, they may be noting, Angela Merkel herself is well-known for staging her own grand political gestures abroad. In the run-up to the Iraq war in 2003, before she became chancellor, the conservative Christian Democrat, looking to the next German election, ran an editorial in the Washington Post criticizing Social Democratic Chancellor Gerhard Schröder under the headline: "Schröder Doesn't Speak for all Germans."

Noting the event, Berlin Mayor Klaus Wowereit, who is publicly sparring with Merkel over the Obama visit, told reporters: "People who live in glass houses shouldn't throw stones. Merkel herself knows full well how to electioneer abroad." Wowereit has said the German capital would welcome Obama and that the city would provide security, though the event itself would have to be organized by the Americans.

But the debate is a major issue for the Obama team because the Brandenburg Gate is of central importance in the planning of his Europe trip. Presidential campaign strategists take nothing more seriously than the backdrops that appear behind a candidate. If Obama just wanted a pretty background, he could give the speech in front of the Eiffel Tower in Paris. But the Brandenburg Gate is a far more powerful image -- it's a symbol of how the West overcame the Cold War and would lend greater gravitas to a keynote speech on trans-Atlantic relations than any other location in Berlin possibly could.

Obama's advisors may also have been taken aback for an altogether different reason. His strategists had hoped that Merkel would take the choice of Berlin and the Brandenburg Gate for the speech as a compliment. Obama's advisors currently view Merkel as the most influential politician in Europe. They perceive French President Nicolas Sarkozy as playing an important role, but he hasn't been in office as long as Merkel. For his part, British Prime Minister Gordon Brown is stuck in a domestic crisis. According to British press reports, the Democratic presidential hopeful will just make a brief visit in London.

Ultimately, the bickering over Obama's Berlin speech is a setback for his team. A perfectly oiled campaign machine helped drive Obama to triumph over Hillary Clinton. But trips abroad are new territory for his political strategists -- and journeys abroad are both difficult to plan and fraught with opportunities for missteps. But his team is hoping to avoid pitfalls through good planning and to be able to present the candidate in a presidential manner, and they could still succeed in that mission with triumphant Berlin appearance by Obama.

But the tumult in Berlin also underscores a bit of foreign policy naivité on the part of Obama's travel planners. Merkel's clear choice of words may be surprising, but it wouldn't have been difficult to imagine that the German government would give a tepid response to his plan to hold a speech at such a highly symbolic historical location.

And the German government isn't just reacting out of respect for Bush during the twilight of his presidency, as some reports have alleged. The respected Frankfurter Allgemeine Zeitung newspaper reported this week that a member of the Bush delegation approached Merkel's foreign policy advisor, Christoph Heusgen, at the G-8 summit in Japan to discuss misgivings about Obama's planned speech. The government is also acting out of respect for Republican presidential candidate John McCain, who has long enjoyed strong ties to Germany and good personal relationships with a number of high-level government officials in Berlin. And it is in no way a given that McCain will lose the election.

Many in Berlin are calling on the government to extend an invitation to McCain as well. But it would be little more than a symbolic gesture because the Republican presidential candidate has little time for a visit to Germany. The Republican National Convention is just weeks away and afterwards the tight campaign schedule will preclude him from any further trips abroad.

A Divided Government in Berlin

The debate over Obama and the Brandenburg Gate has also divided the governing coalition in Berlin, with Vice Chancellor and Foreign Minister Frank-Walter Steinmeier of the center-left Social Democrats and Merkel offering opposing opinions.

"The Americans contributed decisively to saving the city of Berlin, and that is why we should make historic sites such as the Brandenburg Gate available to them," the foreign minister told the Frankfurter Rundschau newspaper on Wednesday. "If Barack Obama decides to take a trip to Europe and to visit Berlin as well as Britain and France, then we should warmly welcome it. We should see his desire to visit as a sign of the importance that trans-Atlantic ties have for him -- and react positively."

Steinmeier, whose Social Democrats are the junior partner in Merkel's grand coalition government, warned the chancellor against giving an overly frosty impression. But Steinmeier may have his own political motivations for getting chummy with Obama. Steinmeier is fond of recalling a telephone conversation he had with Obama during a US visit in April, and he also adopted the Illinois senator's "yes we can" motto during a speech he gave at Harvard. With Germany now approaching 2009 federal elections, his SPD could use Merkel's close relationship with George W. Bush as a campaign issue.

But it is unlikely the German Foreign Ministry will make further statements about the speech. "We are going to keep out of this until Obama has made his decision," a German diplomat said on Thursday.