Lightning flashes over the Rio Negro, and the air seems to crackle with static electricity. Burkhard Pick, a German architect, switches off his computer and pulls the plug out of the socket. If a bolt of lightning hits a power line, he'll be lucky if he only ends up sitting in the dark. "Sometimes refrigerators, air conditioning units and computers burn out," says Pick, 42. Few of the electrical sockets in Manaus, the capital of Brazil's state of Amazonas, are grounded.

It's shortly after 5 p.m., and another major thunderstorm is raging above the city. As always, the downpour stops the work at the construction site led by Burkhard Pick.

Pick is responsible for planning the Arena da Amazônia, the most exotic of the sporting venues at which the 2014 FIFA World Cup will be played. Together with the Brazilian construction company Andrade Gutierrez, the German architectural firm GMP is building a stadium for 42,500 spectators in the center of Manaus.

It's a tricky undertaking, partly because the time schedule isn't dictated by the developers alone, but also by the unpredictability of the local weather.

Six brightly-colored chairs sit baking in the sun all day right by the entrance to the construction site. They are samples of the seats intended for the stadium, and are undergoing long-term exposure tests to check if they meet certain requirements.

Clothing must not stick to the seats when fans sweat, and the colors of the seats are supposed to look brand-new even months after they are installed. Pick says the inside of the Amazonia Arena should resemble "a large fruit bowl." Unfortunately, he'll have to strike yellow from his color scheme because the testing shows it turns gray in the intense sunlight.

Just a few yards away lies the crater of red rainforest earth that will one day be the Amazonia Arena. The site employs some 800 builders, many of whom have come from the farthest corners of the Amazon region.

Brazil has become the focal point of the sporting world. Two years after it hosts the World Cup, the Summer Olympics will be held in Rio de Janeiro. Organizing the planet's two biggest sports events in such quick succession would be difficult for even highly industrialized nations, and yet this developing country wants to prove that it, too, can meet the challenge.

"We've achieved some crazy things over the centuries," says Brazil's Sports Minister Aldo Rebelo. He promises that all of the construction work will be completed on time.

Hopes for a New Landmark

The Brazilian government is spending the equivalent of almost €12 billion ($15.7 billion) on the World Cup alone. Games will be played in a dozen stadiums in every region of the vast country. In some places, like the famous Maracana Stadium in Rio, existing venues are simply being given a thorough facelift. In Manaus the stadium is being built from scratch.

GMP designs sporting venues around the globe. Burkhard Pick was also responsible for the World Cup stadium in Durban, South Africa. Pick, who is also a trained carpenter, isn't rattled easily, but the project in Manaus has turned him into a chain smoker. "Brazil is more complicated than South Africa," Pick concedes.

Manaus is like an island in the heart of the Amazon rainforest, and is very hard to reach by car. Most of the construction materials for the stadium have to be brought from thousands of miles away. Power outages are frequent, and Internet access is sketchy.

If that weren't enough already, the water level of the nearby Rio Negro, one of the tributaries of the Amazon River, can fluctuate by up to 16 meters (53 feet). As a result, work at the construction site has to adapt to the ebb and flow of the river. When the water level is high, building materials and equipment can be delivered by ship. When it's low, they are brought in by air. The largest parts of the stadium's roof are being installed using a special crane that had to be brought over from China.

It is hoped the Amazonia Arena will be a new landmark on the Manaus skyline, joining the opera house financed by rubber magnates in the late 19th century.

Air Conditioning Only for VIPs

Manaus was once a sleepy settlement comprised mainly of wooden shacks, and most of its inhabitants lived in houses on stilts down by the river. But in recent decades the city has grown into a polluted Moloch, with high-rise buildings to rival those in Sao Paulo and congested four-lane highways.

Nevertheless, Manaus wants to sell itself to World Cup audiences as a model green city. The new stadium is therefore being built to strict sustainability standards. Rainwater is collected and reused, and the designers looked to reptile skin for inspiration in designing the roof. The outer shell is constructed in such a way that it creates natural air currents, which are supposed to help cool the stadium.

Only the VIP boxes at the stadium will be air-conditioned, and that is only because FIFA insisted on it. After all, the organization doesn't want its illustrious guests sweating as they watch football.

Rain is the biggest problem for the architects. To prevent the typical torrential Amazon showers filling up the stadium like a bathtub, the engineers had to develop a special drainage system. Even so, no one knows if and how the grass will withstand such daily flooding. Matches played in Manaus could therefore turn into a mudbath.

This scenario, too, is often talked about at "jungle camp," as employees call the central office of developer Andrade Gutierrez, the company responsible for construction of the stadium. Mango trees provide shade for the wooden barracks, condensation drips from air-conditioning units, and parrots screech overhead. Behind closed doors, contracts are being negotiated. At first, Pick's colleagues jokingly referred to him as a "gringo." He, too, had plenty to get used to.

Deadlines aren't taken particularly seriously in Brazil. What's more, construction companies and politicians often haggle over the prices of materials and contracts for suppliers. All in all, the Amazonia Arena will cost some €200 million to build -- at least, that's what the government has set aside. However, the project has been plagued by delays. For example, the roof should have been installed back in March, and it still isn't ready.

The inhabitants of Manaus have embraced the swanky new venue, which stands right next to the Sambodromo, where carnival parades are held each year. They have their picture taken in front of the building site, and postcards of the project are already on sale. Once completed, the stadium will look from the outside like a gigantic sleeping snake.

But what will happen to the splendid arena after the World Cup? The press complains it will become another useless white elephant. After all, the city in the middle of the rainforest doesn't have a soccer club that could fill the stadium.

But the architects at GMP disagree. They insist the stadium is a multipurpose hall that could also be used for staging pop concerts and other major events. "We're building the world's biggest party venue," they say.

Brazil's passionate football fans are less interested in subjects like cost-effectiveness. They are more worried about the precarious state of their national squad.

The "Seleção" has slipped to 14th place in FIFA's world rankings. "Brazil currently has only two above-average players: Neymar and Thiago Silva," complains Rivelino, one of the stars of Brazil's dream team, which won the country's third World Cup title in 1970.

Brazilian fans booed and whistled at their team's poor performance in recent friendlies against China and South Africa. Former Brazilian national player Romario is already calling for head coach Mano Menezes to be replaced. "He's weak, he makes mistakes with the lineup, and he doesn't know how to get the team fired up," Romario says.

The Seleção probably won't play in Manaus. Their matches are due to be contested on far grander stages in Sao Paulo and the capital, Brasilia.

Four first-round games will be played in the Amazonia Arena. But because of the time difference with Europe, kick-off will be in the afternoon, when the temperatures in Manaus will be just above 35 degrees Celsius (95 degrees Fahrenheit).

The amateur footballers of Trem Bala often kick a ball around in the evening on sandy fields near the stadium. They know exactly what the temperatures will mean for European teams.

Correction: The original version of this story included a translation error indicating that the stadium being built in Manaus, Brazil, would be the most expensive of the sporting facilities being created to host the country's 2014 World Cup. The term should have been "most complex." SPIEGEL ONLINE International regrets the translation error, which was not made by the reporter. 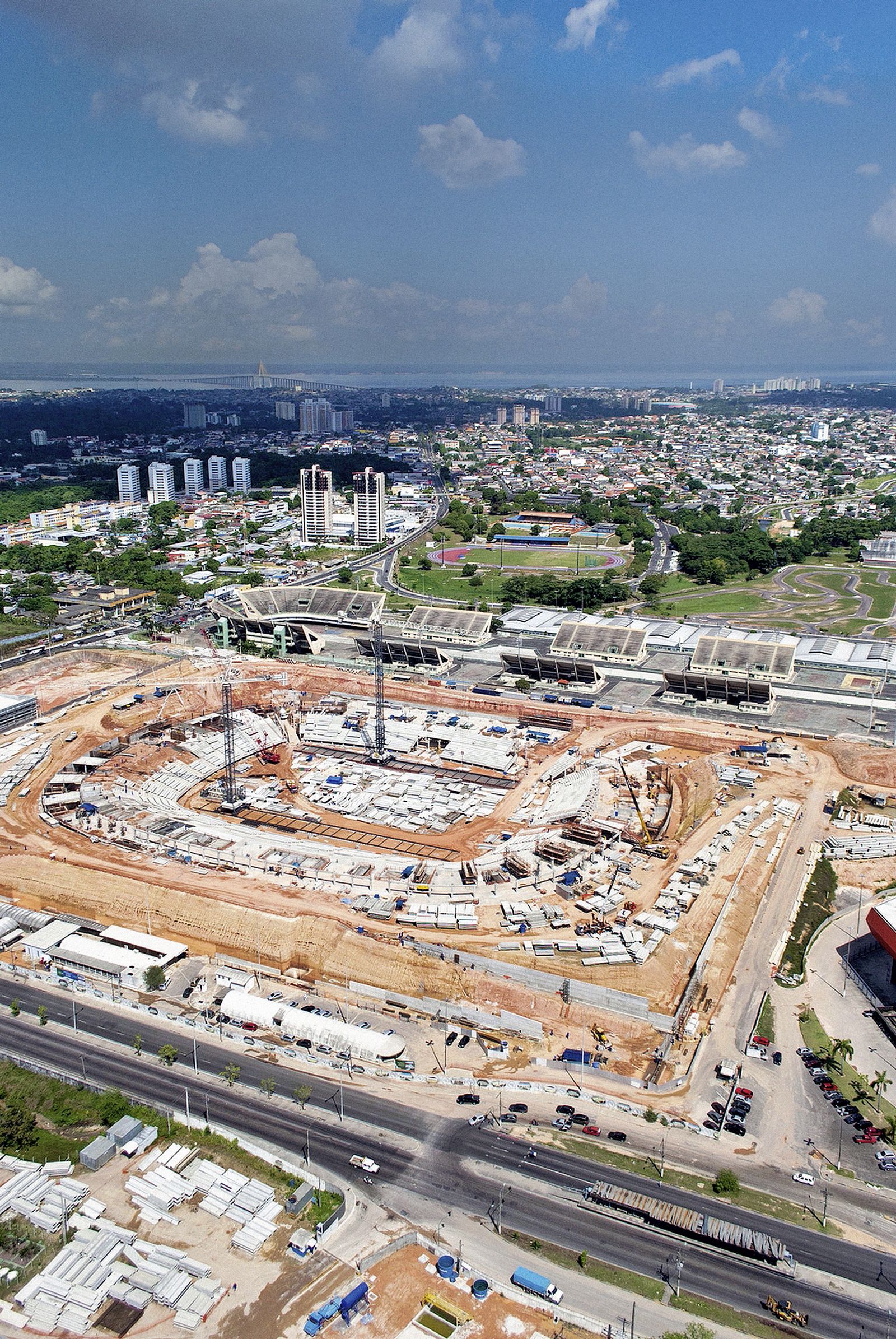 The construction site for the Amazonia Arena in Manaus.