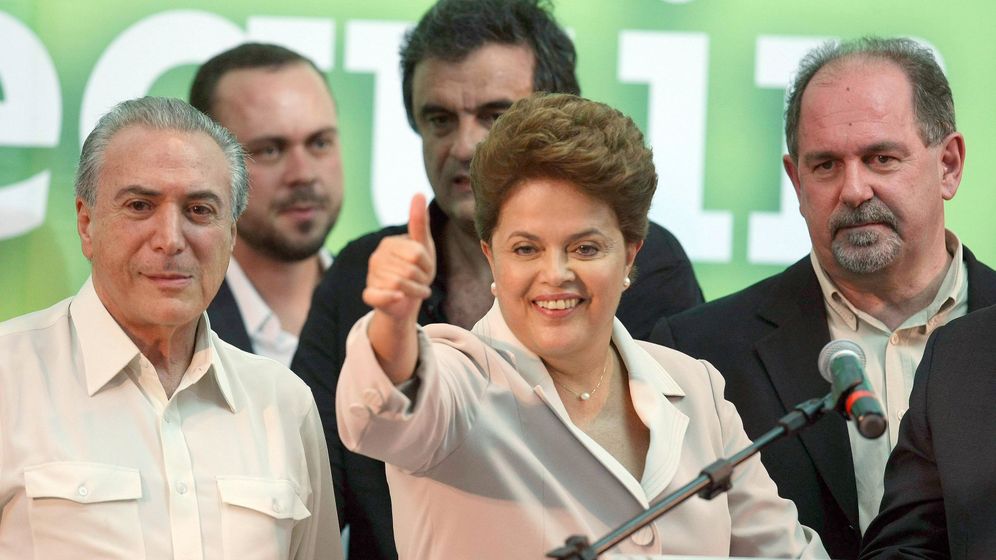 Dilma Rousseff appears before the international press corps wearing a white suit. "I want to be the president of all Brazilians!" she proclaimed, stretching her hand out in gesture to the opposition, as if handing them an olive branch. After a campaign that at times turned dirty, and in which she took several low blows, it was an encouraging symbol.

Rousseff, 62, is the first female leader of South America's largest country. At her election party, she found the right tone with some simple words.

Rousseff is not a woman of fiery speeches and she doesn't have the charisma or rhetorical talent of political star Luiz Inacio Lula da Silva. And on this night, her political mentor doesn't make a showing at the hotel in Brasilia -- he doesn't want to steal the limelight from Rousseff. "He thinks that today is her party," a spokesman for Lula announced. "The president won't be making any statement today."

In her first speech as president-elect, Rousseff mentioned the importance of freedom of opinion twice. "I would rather have the noise of the press than the silence of a dictator!" she said. During the era of the military dictatorship in the 1970s, the ex-guerrilla was placed under arrest for several years and tortured.

Rousseff also said she didn't want to engage in any war against the Brazilian press and that she didn't want to muzzle journalists in the way that her left-wing populist counterparts in Argentina, Venezuela, Bolivia and Ecuador have sought to do. But she said that the commentators at the country's powerful television station TV Globo, which have fairly openly favored opposition candidate José Serra, should also show respect.

Like Lula and his predecessor Fernando Henrique Cardoso, Rousseff -- the daughter of Bulgarian immigrants -- belongs to the generation of those who fought against the dictatorship. They may have been of different political persuasions but they were all dyed-in-the-wool democrats.

Brazil's transformation from a fettered giant to a country of hope with aspirations to become a major world power didn't begin with Lula. The transformation has its roots in 1994, the year the country introduced the real as its currency. At the time, social democrat Cardoso succeeded in getting a country that had been shaken to its core by hyperinflation and explosive debt back on track through economic and finance policy reforms.

Lula Gave a Voice to Millions of Poor

Lula continued with Cardosa's stability policies and added an overdue social welfare component to them. Lula's major contribution to society as a statesman was that he gave a voice to the millions of poor and brought marginalized people back to the fold -- all without alienating the country's ruling elite. That's also why, at the end of his term, he enjoys an approval rating of more than 80 percent.

Rousseff's election victory is testament to how democracy in Brazil has matured, despite all the defects that still remain. Elections in Brazil now run smoother and more securely than in the United States and the electronic voting system is regarded as exemplary world wide. The fact that in a Catholic country a divorced woman could take the top job is a sign of a functioning democracy -- in the past it would have been unthinkable.

So what awaits Brazil in the Rousseff era? Even on her victory night she was already giving indications about her economic strategy: Former Minister of Finance Antonio Palocci was sitting beside her in the car as she traveled to her first appearance as president-elect. He is expected to be the central figure in her cabinet and may well become finance minister or Rousseff's chief of staff. Rousseff intends to revive Brazil's economic miracle.

Palocci was originally Lula's favorite to succeed him, but a corruption scandal in his home town spoiled the jovial expert's chances of becoming president. On Wall Street and in the business metropolis Sao Paulo, Palocci is seen as a reliable advocate of a stability-oriented economic policy geared towards keeping inflation in check.

No surprises are to be expected in foreign policy either: Rousseff has little experience on the international stage and in the first months she will hold back with her own initiatives. Politically, she is close to Lula's Strategy Minister Samuel Pinheiro Guimarães, a die-hard left-wing nationalist, who was also instrumental in shaping Lula's foreign policy.

She is likely to focus on deepening ties with China, Iran, India and other emerging countries, and on promoting South American integration. Brazil's relations with Europe and the US had already waned in significance under Lula. Brazil will have to focus on its own strengths because less can be expected in the coming years from Europe and the United States -- both economically and politically, Rousseff said. "But Brazil will not isolate itself, rather it will be more open to the world."

First and foremost, the negative side effects of success must be dealt with: The economic boom has meant more and more foreign currency and speculative capital flowing into Brazil. The dollar fell dramatically under Lula and the Brazilian real is almost constantly on the rise, which is affecting Brazilian exports. The Lula government increased taxes on foreign investment in Brazil to curb the influx of foreign currency, so far without success. In her first speech, Rousseff warned of the consequences of a currency war.

President Lula wants to personally prepare his successor with a crash course on the perils of international economic and financial policy: He wants to take Rousseff to the G-20 summit, which opens on Nov. 8, in Seoul.