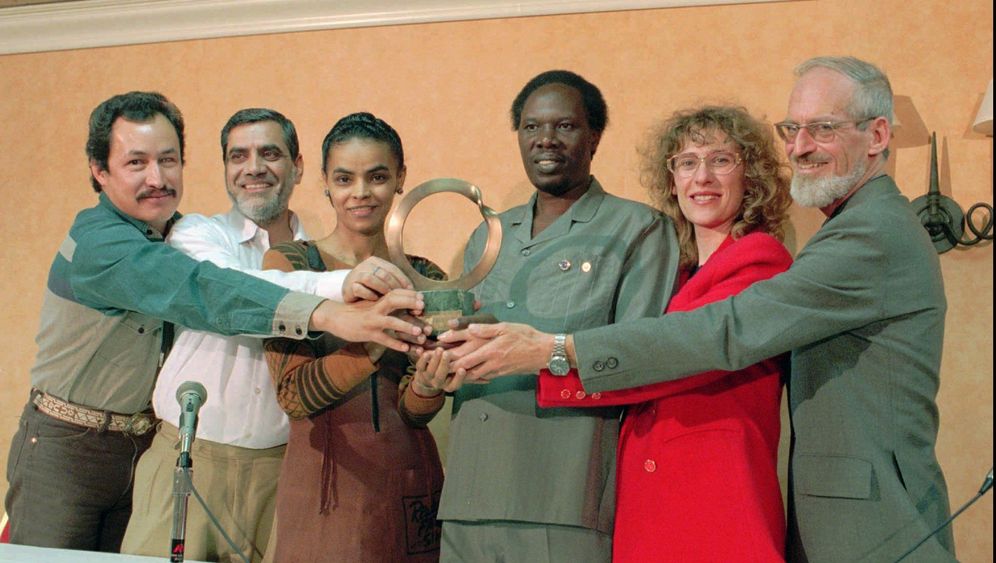 The members of the Rio de Janeiro yacht club are not an easy audience for a former political activist and ecologist. Well-heeled couples, the majority of them elderly, sit on the veranda with its view out onto the Sugar Loaf and Guanabara Bay. Politically most of them are closer to the conservatives than to Brazil's colorful Green Party and its presidential candidate Marina Silva.

Nonetheless, on this sunny morning the moneyed elite have found a place in their hearts for the former environment minister. Ladies in expensive outfits rise from their seats, pull their mobile phones out and have their photograph taken with Silva. "She looks much better than she does on television," one of them whispers.

Silva is a delicate woman with large, deep-set eyes. Her voice is hoarse from campaigning, she wears a simple white ensemble and a brightly colored scarf. She comes from a poor family in the far-flung Amazonian state of Acre, in western Brazil. Before she began her career in politics, Silva worked as a housemaid and as a rubber tapper. Seriously ill with hepatitis at the age of 16 she moved to the city to seek medical care and an education.

Until she switched to the Green Party, Silva was the most important representative of the left and environmental wings in the Workers' Party (PT), the party of President Luiz Inácio Lula da Silva. But now Silva is challenging Lula's administration and her rise is the most interesting phenomenon in Brazil's presidential election campaign.

A Duel Between Two Female Candidates?

Could it be that on Sunday, when the first round of presidential elections are held in Brazil, that its results would be a duel between two female candidates? The latest polls in Rio show Silva has already overtaken José Serra, the former governor of the state of Sao Paulo and a member of the Brazilian Social Democracy Party (PSDB) who had been the second most popular choice to take the presidency until then. Now Silva is hoping that that Dilma Roussef, the PT candidate and Lula's preferred successor, will miss out on an absolute majority on Sunday. If she does, then she will have to face a second run-off ballot four weeks later.

The latest polls have shown that Rousseff has lost some of her lead and a clear victory in the first round of voting no longer looks certain. In a second round she would still likely face Serra. But the real winner would actually be Silva. The Green Party votes would be decisive and both of the leading candidates will need to woo the former environment minister.

Silva resigned as environment minister two years ago. Although President Lula, as he is known, happily used Silva as his regime's green figurehead at international conferences, in reality, she was barely able to achieve anything in that area. The president had systematically eroded her authority. His favorite woman in the administration was actually Rousseff, an energetic technocrat who has, so far, not shown any particular interest in environmental issues.

In fact Rousseff has helped jump start all of the major government projects that have drawn the ire of environmentalists: Dams, power plants, roads and the extension of bio-fuels production. Rousseff was the most powerful female politician in the administration -- only Lula's own wife had more influence over the Brazilian president.

But Rousseff also straddled the worlds of government and business, a constant source of intrigues and scandals. A week ago it became known that one of her closest colleagues had been appointing friends and relatives to important positions. Some members of this circle in turn apparently cashed in when awarding state contracts.

Corruption and nepotism would appear to be among the Lula administration's greatest handicaps. One can still hardly overlook the huge Brazilian state apparatus. Tens of thousands of PT members have been given positions and jobs by Lula and some control vast budgets worth billions. Sleaze thrives and the web of public, political and private interests become less and less transparent.

To support Rousseff's candidacy, Lula recently forged an alliance with the centrist Brazilian Democratic Movement Party (PMDB), the largest political party in Brazil. This could be a pact with the devil though: The PMDB is a loosely allied party with no clear ideological basis, notorious for cronyism and greed, with many of its politicians involved in corruption scandals. Lula may well come across as a Teflon president -- scandals simply slide off him. But Rousseff does not have the same protective aura, she is far more vulnerable. And for weeks the Brazilian media have been combing through her history for potential scandals.

The more dirt the local press finds, the brighter Silva's star shines. She has become a media darling, the Mother Teresa of Brazilian politics. Her resume is immaculate and she is honored around the world for her ceaseless fight against deforestation and environmental destruction. She made a clever move by getting a well-known businessman to run for the office of vice president, thereby gaining access to bankers and managers in Brazil. Artists and intellectuals back her -- it has become fashionable to support Marina. Even Brazilian supermodel Gisele Bündchen has said that she will be voting for the Green Party.

When compared to the smart environmentalist Rousseff and Serra start to look old fashioned. Both of them have similar biographies: They were shaped by the fight against the military dictatorship of the 1960s and 1970s. In the 1960s, Serra was the leader of the Brazilian student movement and he lived in exile in Chile for years. Upon returning to Brazil he joined the PSDB to which Lula's predecessor, Fernando Henrique Cardoso, also belonged.

However, as a campaigner the ex-governor of Sao Paulo has been a disaster. He always seems to be in a bad mood, lacks any charisma and likes to attack journalists. He hesitated for months before announcing his candidacy while at the same time blocking other more promising candidates. And so far he has failed to explain what he would do differently from the popular Lula.

Serra continuously assures everyone that he has no plans to shake up the current administration's social welfare program and he rarely criticizes its economic policies. Out of desperation, his campaign managers have taken to showing videos of the president's appearances in the vain hope that some of Lula's charisma will rub off on their own candidate.

After eight years in office Lula is more popular than ever, with over 80 percent of Brazilians declaring themselves satisfied with his administration. Millions of people have been raised out of poverty under his government. The former shoe-shiner and metalworker has given the marginalized a face and a voice. They are proud of their president and would walk through fire for him.

Lula's place in the history books is assured -- he is almost like a monument in Latin America's political landscape. Now he wants to ensure his political legacy continues after he leaves office. His preferred successor had been the former Economy Minister Antonio Palocci, but he has been embroiled in a corruption scandal in his home town.

Rousseff was Lula's second choice, and that is a shortcoming that still sticks to her. His pushed through her candidacy in the face of fierce resistance within the party, which she only joined a few years ago. Next to the gifted orator Lula she seems bland and uptight. She gets tangled up in long sentences and lacks verve and charisma. Her colleagues regard her as difficult and authoritarian. She is someone who cannot bear to be contradicted.

Over the past few months, marketing experts, media advisors and plastic surgeons have attempted to transform the "Iron Lady" into a "Mother of the Nation." Lula has spent months traveling with her across the country, introducing her to the electorate. At the start many assumed she was his wife, but now she is known as "Lula's candidate." At every campaign appearance she repeats the president's name like a mantra.

But how will she govern the country when her mentor is no longer there to protect her? In the backrooms of the PT the knives are already being sharpened, there are many old scores to settle. In particular the left wing of the party is hustling for power. They had to take a backseat under Lula but Rousseff won't have it quite so easy. However, the party wants to avoid another round of blood-letting by frustrated grassroots politicians at all costs -- particularly as most dissidents won't stay homeless for long.

The Greens under Marina Silva have managed to attract many of the former PT members who have become disappointed with the growth fetishism of the Lula years. The former rubber tapper from the Amazonian region has a similarly fascinating biography to the president but she also represents a young, modern Brazil, one that doesn't identify with Lula.

In Rio's yacht club she even managed to win over the elite of the old Brazil. Silva was applauded after addressing the members. One woman carefully folded a Green Party flyer and put it in her handbag. She had been planning to vote for Serra on Sunday but after Marina Silva's appearance she will have another think about it. "I am a member of the Society for the Prevention of Cruelty to Animals," she says. "And that fits very well with the Greens."