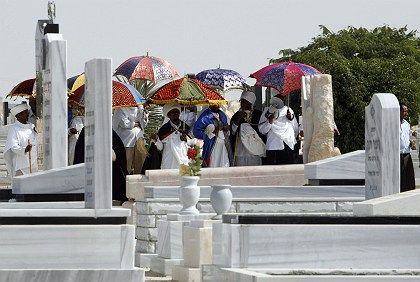 Mourners attend the funeral of Gabriel Dawit in the southern Israeli city of Beersheba on Oct. 17, 2007. Israel and Hezbollah exchanged the remains of Dawit, an Ethiopian Jew who had immigrated to Israel, for a captive Hezbollah fighter and the bodies of two comrades in a UN-brokered deal last Monday.

These days, there arent many people Israeli Prime Minister Ehud Olmert can trust completely. Foreign Minister Tzipi Livni demanded Olmert's resignation after the disastrous war against Hezbollah in Lebanon, and Olmert's coalition is on the verge of collapse because of a few concessions granted to the Palestinians. Some members of his party are already talking about the post-Olmert era.

But one man remains loyal to the 62-year-old leader. His name is Ofer Dekel and he is the former deputy chief of Israels domestic intelligence agency, Shin Bet. Olmert met the now 56-year-old in the mid-1990s, while Olmert was the mayor of Jerusalem. Back then the two met in the mornings to go jogging. But since Olmert became prime minister, his security detail no longer allows him to run outside. Instead, the two now break a sweat on treadmills that Olmert had installed in a room in his office.

Dekel is more than a good friend; he also holds the key to Olmerts political survival. After the war in Lebanon last year, Olmert put Dekel in charge of efforts to free the soldiers Ehud Goldwasser and Eldad Regev, who were abducted by the Lebanon-based, Islamic militant group Hezbollah in an incident that sparked the 2006 Lebanon War. Olmert had declared the safe return home of the army reservists as one of the goals of the bungled military campaign, but the nation is still waiting for him to make good on his promise.

Dekel was finally able to tell his friend of the first signs of progress last Monday: Jerusalem received the body of an Ethiopian Jew and a letter from the Israeli pilot Ron Arad -- missing for over 20 years -- from the radical Shiite militia. In return, the Israelis gave back the remains of two Hezbollah fighters and released a Lebanese prisoner.

The exchange is a possible new beginning between the two sworn enemies. For the first time since the end of last summer's war, there is movement on one of the key fronts of the Middle East conflict. The solution of the prisoner problem is considered a precondition for any further de-escalation that might eventually lead to a peace treaty between Israel and Lebanon.

Both sides praised the deal as soon as it was concluded. Shiite militia leader Hassan Nasrallah spoke of having "advanced positively" in the negotiations between Israel and Hezbollah, while Olmert commended the balanced nature of the exchange.

Its a measure of modest success that both sides could celebrate as a victory. Olmert, under immense domestic political pressure, was able to present himself to the public as an effective negotiator. And Nasrallah could demonstrate his goodwill to the world, helping Hezbollah avoid the international isolation threatened by UN Security Council Resolution 1701, which was intended to resolve the Israel-Lebanon conflict. The deal is also important for the United Nations, proving as it does that the world body is still able to effectively mediate international crises. The episode is even garnering kudos for Germanys BND foreign intelligence agency, as it was one of Berlins spooks who was responsible for piecing the deal together.

Preparations for the exchange were top secret. The BND intelligence officer first flew to Nasrallahs headquarters in Beirut. Whoever visits the Shiite leader is subject to a strip search before handing over mobile phones and going through a metal detector. The German knows the procedure; he made previous visits to help set up the last large prisoner exchange with Israel in 2004. 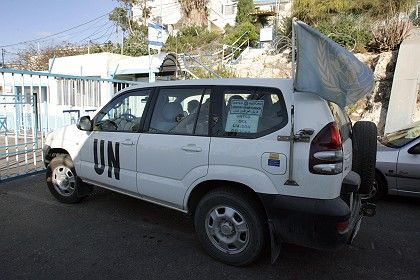 A United Nations vehicle waits to cross the northern Israeli border with Lebanon on Oct. 15 ahead of the exchange deal between Israel and Lebanon.

The agent, who comes from Berlin and is an expert in Arab culture, is known in the intelligence community as Mr. Hezbollah. He was the UNs first choice for the mediator role. He was the BNDs man in Beirut, knows the finer points of Syrian politics, and speaks fluent Arabic. He has shuttled between Tel Aviv, Berlin, New York and Beirut ever since meeting former UN Secretary-General Kofi Annan in September 2006.

Behind the scenes, Nasrallah was pulling the strings for the exchange, which is hoped to be the overture to the potential big event, as Nasrallah refers to the possible return of the two Israeli soldiers. The practical details were sorted out by the BND officer with the Shiite sheikhs negotiator Hajj Wafik. But since it was uncertain whether Nasrallah would change his mind at the last minute, the agent from Berlin personally accompanied the convoy of cars all the way to the Lebanese-Israeli border.

The Hezbollah men brought the corpse of Gabriel Dawit, an Ethiopian Jew who had immigrated to Israel and who had drowned near Haifa in 2005. The circumstances of Dawit's death are unclear. The Israeli government had up till now presumed he had died in a swimming accident or had committed suicide. But its more likely he fell into the hands of Hezbollah while engaging in smuggling.

'We Aren't Any Closer to a Final Deal' 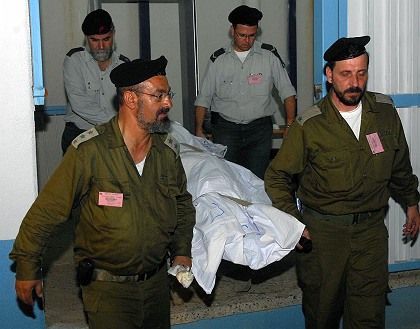 Israeli officers retrieve the body of Gabriel Dawit, returned during the exchange deal between Israel and Hezbollah.

The first attempt at rapprochement between the two sides since the war took place around 5 p.m. on Oct. 15 at the Rosh Hanikra border post. The Israeli delegation first handed over the remains of two Lebanese fighters and a seriously ill Hezbollah militia member who had been captured.

The Shiite militia then returned the body of the Ethiopian and handed the BND agent a missive that the Israelis have been waiting for for a long time: a letter written from a Lebanese prison by the missing pilot Ron Arad, who disappeared in 1986. The German middleman flew to Israel last Wednesday to give it to Olmerts negotiator Dekel.

The note from Arad, who has become an Israeli national hero and is likely long since dead, dates from 1988. At that point, he was still being held by Hezbollah, but later he was probably given to Irans Revolutionary Guard. His actual fate has never been determined.

The letter does little to explain what happened to Arad, but its evidence that Hezbollah has at least some pieces to the mystery squirreled away. Nasrallah likes to speak of samples, while slyly pointing out hes done everything imaginable to solve the case. Now, he believes, its Israels turn to reciprocate by releasing the Lebanese national Samir Kuntar.

Considered a freedom fighter in Beirut, Kuntar is seen as an heartless murderer in Israel. In 1979, he killed one familys father and daughter in the northern Israeli port city of Nahariya. The mother managed to hide herself and her younger daughter from Kuntar. However, she tragically suffocated the child while trying to keep her quiet.

Nasrallah is also calling for the release of four other militia members besides Kuntar. Hezbollah has essentially given up its demand that around 1,000 prisoners, mostly Palestinians, be freed from Israeli jails. But the name Kuntar alone is contentious enough to block a wider deal for the foreseeable future, making it unlikely that the small success will be quickly followed by a bigger one.

Prime Minister Olmert has learned from the mistakes made during the war in Lebanon. More than anything, he doesnt want to give the relatives of the abducted soldiers a sense of false hope. We arent any closer to a final deal, Israeli negotiator Dekel told SPIEGEL last Thursday.

Jerusalem doesnt want to surrender an inch. Dekel even rules out the possibility of exchanging Kuntar for the two soldiers. Kuntar isnt part of any such deal, he says, explaining that a 2004 offer whereby Kuntar would be released once Hezbollah clears up the fate of Ron Arad still stands. Although top Israeli intelligence officials now believe that Nasrallah probably doesnt know where Arad is, Dekel is not backing away from Israels hard-line position: We will not do without information about Ron Arad.

Nasrallah is even less willing to compromise. He hasnt even delivered proof that the two Israeli reservists are still alive. The Israelis will receive nothing without giving something in return, says Kuntars brother Bassam. Hes convinced that Hezbollah will soon bring Samir home: I have complete faith in Nasrallah.

But his hopes could soon be dashed. A possible explanation for Nasrallah's stubborn refusal to prove the soldiers are alive is not because he doesn't want to, but because he cant. According to a secret internal investigation by the Israeli army, the two soldiers were at least seriously wounded. One of them probably died of his wounds, and it is possible that both are already dead.

Tomer Weinberg witnessed the abduction of the two soldiers on July 12, 2006. He was patrolling the Israeli-Lebanese border with Goldwasser and Regev in an Israeli army Humvee vehicle. As Hezbollah opened fire, he managed to hide in a roadside ditch. His arm, leg and lung were pierced by three bullets. He stayed there while the Hezbollah fighters took his comrades. I didnt hear a thing, no screams, nothing, the 27-year-old recalls, while still wanting to believe the two are alive.

But even if they arent, its always been Israeli policy to do all it can to retrieve the remains of its dead soldiers. Jerusalem has repeatedly released terrorists for this reason. Prime Minister Olmert telephoned last week with Smadar Haran-Kaiser, the mother who survived Kuntars bloodbath. She will not oppose the release of the man who murdered her family.