In private, the general likes to wear leather. Philip Mark Breedlove, 60, is a well-known Harley-Davidson fan, and up until a few weeks ago, he also served as the commander of NATO and American troops in Europe. Even during his tenure as the military leader of the alliance, the American four-star general would trade his blue Air Force uniform for motorcycle gear and explore Europe's roads with his friends.

Photos show a man with broad shoulders, a wide gait and an even wider smile. The pictures of the general's motorcycle tours were recently made public on the online platform DC Leaks. Restraint, it seems, was never Breedlove's thing.

The photos are the entertaining part of an otherwise explosive collection of Breedlove's private email correspondence. Most of the 1,096 hacked emails date back to the dramatic 12 months of the Ukraine crisis after Russia annexed Crimea in March 2014. Thousands died in the skirmishes between Kiev's troops and Moscow-aligned separatists. More than 2 million civilians fled eastern Ukraine.

Russia supports the separatists with weapons, fighters and consultants. When people began calling for Washington to also massively intervene in 2015, the Ukraine conflict risked escalating into a war between East and West.

The newly leaked emails reveal a clandestine network of Western agitators around the NATO military chief, whose presence fueled the conflict in Ukraine. Many allies found in Breedlove's alarmist public statements about alleged large Russian troop movements cause for concern early on. Earlier this year, the general was assuring the world that US European Command was "deterring Russia now and preparing to fight and win if necessary."

The emails document for the first time the questionable sources from whom Breedlove was getting his information. He had exaggerated Russian activities in eastern Ukraine with the overt goal of delivering weapons to Kiev.

The general and his likeminded colleagues perceived US President Barack Obama, the commander-in-chief of all American forces, as well as German Chancellor Angela Merkel as obstacles. Obama and Merkel were being "politically naive & counter-productive" in their calls for de-escalation, according to Phillip Karber, a central figure in Breedlove's network who was feeding information from Ukraine to the general.

"I think POTUS sees us as a threat that must be minimized,... ie do not get me into a war????" Breedlove wrote in one email, using the acronym for the president of the United States. How could Obama be persuaded to be more "engaged" in the conflict in Ukraine -- read: deliver weapons -- Breedlove had asked former Secretary of State Colin Powell.

Breedlove sought counsel from some very prominent people, his emails show. Among them were Wesley Clark, Breedlove's predecessor at NATO, Victoria Nuland, the assistant secretary of state for European and Eurasian affairs at the State Department, and Geoffrey Pyatt, the US ambassador to Kiev.

One name that kept popping up was Phillip Karber, an adjunct assistant professor at Georgetown University in Washington DC and president of the Potomac Foundation, a conservative think tank founded by the former defense contractor BDM. By its own account, the foundation has helped eastern European countries prepare their accession into NATO. Now the Ukrainian parliament and the government in Kiev were asking Karber for help.

On February 16, 2015, when the Ukraine crisis had reached its climax, Karber wrote an email to Breedlove, Clark, Pyatt and Rose Gottemoeller, the under secretary for arms control and international security at the State Department, who will be moving to Brussels this fall to take up the post of deputy secretary general of NATO. Karber was in Warsaw, and he said he had found surreptitious channels to get weapons to Ukraine -- without the US being directly involved.

According to the email, Pakistan had offered, "under the table," to sell Ukraine 500 portable TOW-II launchers and 8,000 TOW-II missiles. The deliveries could begin within two weeks. Even the Poles were willing to start sending "well maintained T-72 tanks, plus several hundred SP 122mm guns, and SP-122 howitzers (along with copious amounts of artillery ammunition for both)" that they had leftover from the Soviet era. The sales would likely go unnoticed, Karber said, because Poland's old weapons were "virtually undistinguishable from those of Ukraine."

A destroyed airport building in the eastern Ukrainian city of Donetsk : Thousands were killed in fighting during the Ukraine conflict.

Karber noted, however, that Pakistan and Poland would not make any deliveries without informal US approval. Furthermore, Warsaw would only be willing to help if its deliveries to Kiev were replaced with new, state-of-the-art weapons from NATO.

Karber concluded his letter with a warning: "Time has run out." Without immediate assistance, the Ukrainian army "could face prospect of collapse within 30 days."

"Stark," Breedlove replied. "I may share some of this but will thoroughly wipe the fingerprints off."

In March, Karber traveled again to Warsaw in order to, as he told Breedlove, consult with leading members of the ruling party, on the need to "quietly supply arty (eds: artillery) and antitank munitions to Ukraine."

Much to the irritation of Breedlove, Clark and Karber, nothing happened. Those responsible were quickly identified. The National Security Council, Obama's circle of advisors, were "slowing things down," Karber complained. Clark pointed his finger directly at the White House, writing, "Our problem is higher than State," a reference to the State Department.

Breedlove and his fellow campaigners also had the German federal government in their sights early on. In April 2014, Clark sent a mail to Nuland and Breedlove and wrote that Bulgarian President Rosen Plevneliev had implied there was a "problem with German attitude" concerning its "sphere of influence."

Efforts by Merkel and German Foreign Minister Frank-Walter Steinmeier to find a peaceful solution to the Ukraine crisis were portrayed by hardliners as a readiness in Berlin to let Russia bully Ukraine.

In order to build up pressure for the desired weapons aid, Clark and Karber began painting grim scenarios. If the West were to abandon Ukraine, former NATO Supreme Allied Commander Europe Clark prophesized, China would then be encouraged to expand its sphere of influence in the Pacific. It could also lead to NATO's collapse. The situation could only be prevented with the help of military aid, they argued. On November 8, 2014 Clark sounded the alarm internally after talks with Ukrainian President Petro Poroshenko, his advisers and senior military and intelligence officials. The Ukrainians were expecting an attack as early as the end of the month.

Breedlove answered, "I will focus on this immediately." He also wrote, "One of our biggest problems" is that one of the United States' allies had been denying the findings of its intelligence. The remark was aimed at Germany's BND foreign intelligence agency, which had been much more reserved in its assessment of the situation -- a position that in retrospect would prove correct.

'The Front Is Now Everywhere'

Karber's emails constantly made it sound as though the apocalypse was only a few weeks away. "The front is now everywhere," he told Breedlove in an email at the beginning of 2015, adding that Russian agents and their proxies "have begun launching a series of terrorist attacks, assassinations, kidnappings and infrastructure bombings," in an effort to destabilize Kiev and other Ukrainian cities.

In an email to Breedlove, Clark described defense expert Karber as "brilliant." After a first visit, Breedlove indicated he had also been impressed. "GREAT visit," he wrote. Karber, an extremely enterprising man, appeared at first glance to be a valuable informant because he often -- at least a dozen times by his own account -- traveled to the front and spoke with Ukrainian commanders. The US embassy in Kiev also relied on Karber for information because it lacked its own sources. "We're largely blind," the embassy's defense attaché wrote in an email.

At times, Karber's missives read like prose. In one, he wrote about the 2014 Christmas celebrations he had spent together with Dnipro-1, the ultranationalist volunteer battalion. "The toasts and vodka flow, the women sing the Ukrainian national anthem -- no one has a dry eye."

Karber had only good things to report about the unit, which had already been discredited as a private oligarch army. He wrote that the staff and volunteers were dominated by middle class people and that there was a large professional staff that was even "working on the holiday." Breedlove responded that these insights were "quietly finding their way into the right places."

In fact, Karber is a highly controversial figure. During the 1980s, the longtime BDM employee, was counted among the fiercest Cold War hawks. Back in 1985, he warned of an impending Soviet attack on the basis of documents he had translated incorrectly.

He also blundered during the Ukraine crisis after sending photos to US Senator James Inhofe, claiming to show Russian units in Ukraine. Inhofe released the photos publicly, but it quickly emerged that one had originated from the 2008 war in Georgia.

By November 10, 2014, at the latest, Breedlove must have recognized that his informant was on thin ice. That's when Karber reported that the separatists were boasting they had a tactical nuclear warhead for the 2S4 mortar. Karber himself described the news as "weird," but also added that "there is a lot of 'crazy' things going on" in Ukraine.

The reasons that Breedlove continued to rely on Karber despite such false reports remain unclear. Was he willing to pay any price for weapons deliveries? Or did he have other motives? The emails illustrate the degree to which Breedlove and his fellow campaigners feared that Congress might reduce the number of US troops in Europe.

Karber confirmed the authenticity of the leaked email correspondence. Regarding the questions about the accuracy of his reports, he told SPIEGEL that, "like any information derived from direct observation at the front during the 'fog of war,' it is partial, time sensitive, and perceived through a personal perspective." Looking back with the advantage of hindsight and a more comprehensive perspective, "I believe that I was right more than wrong," Karber writes, "but certainly not perfect." He adds that, "in 170 days at the front, I never once met a German military or official directly observing the conflict."

Breedlove's leaked email correspondences were read in Berlin with great interest. A year ago, word of the NATO commander's "dangerous propaganda" was circulating around Merkel's Chancellery. In light of the new information, officials felt vindicated in their assessment. Germany's Federal Foreign Office has expressed similar sentiment, saying that fortunately "influential voices had continuously advocated against the delivery of 'lethal weapons.'"

Karber says he finds it "obscene that the most effective sanction of this war is not the economic limits placed on Russia, but the virtual complete embargo of all lethal aid to the victim. I find this to be the height of sophistry -- if a woman is being attacked by a group of hooligans and yells out to the crowd or passersby, 'Give me a can of mace,' is it better to not supply it because the attackers could have a knife and passively watch her get raped?"

General Breedlove's departure from his NATO post in May has done little to placate anyone in the German government. After all, the man Breedlove regarded as an obstacle, President Obama, is nearing the end of his second term. His possible successor, the Democrat Hillary Clinton, is considered a hardliner vis-a-vis Russia.

What's more: Nuland, a diplomat who shares many of the same views as Breedlove, could move into an even more important role after the November election -- she's considered a potential candidate for secretary of state. 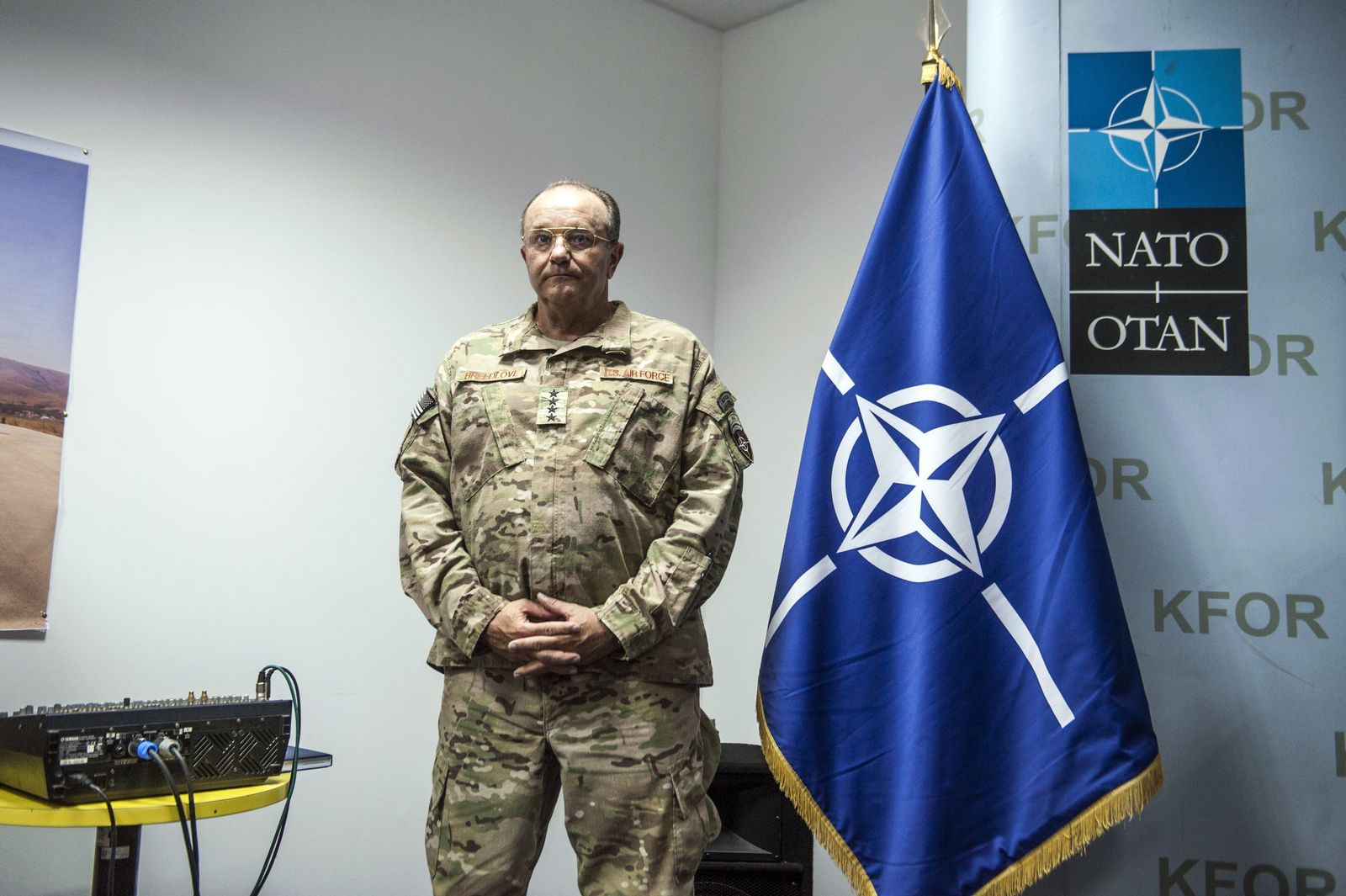 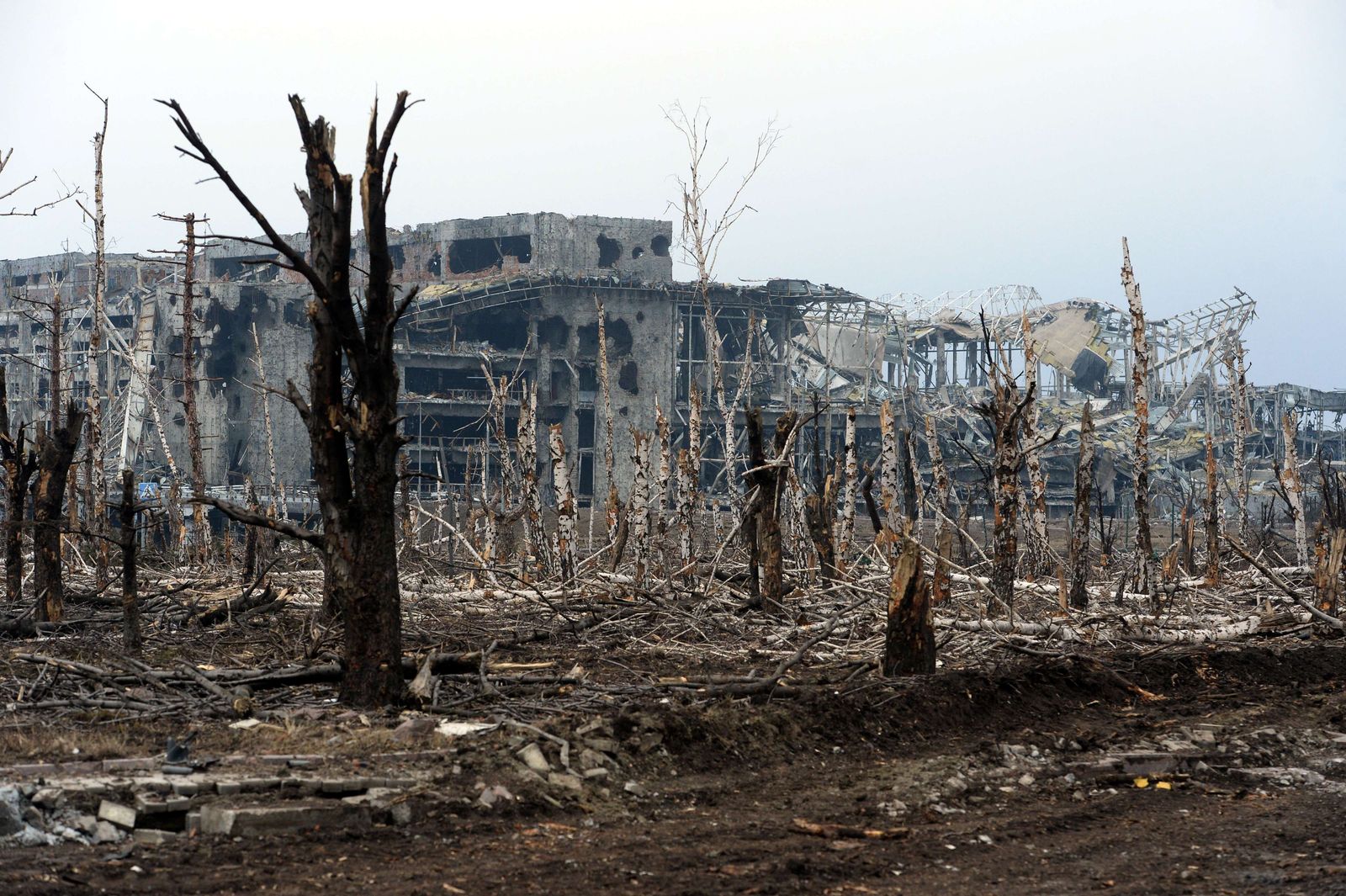 A destroyed airport building in the eastern Ukrainian city of Donetsk : Thousands were killed in fighting during the Ukraine conflict.