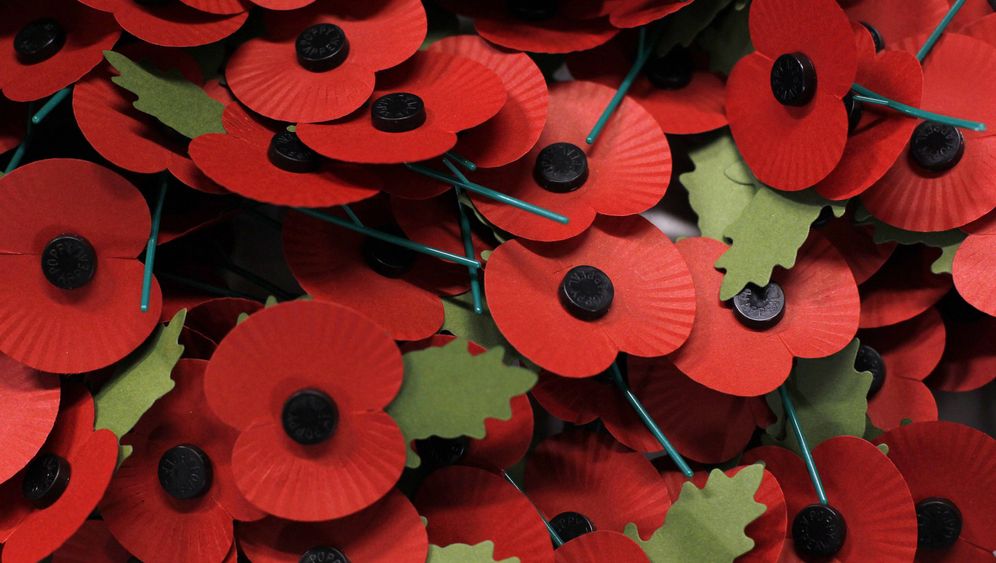 The notebook on Una Barrie's living-room table will soon be 100 years old. Not much bigger than a cigarette case, it belonged to her father Bernard, a bank employee who crept through the trenches in Flanders as a signaller for the British army during World War I. The war has faded into the past, but now her father's field diary suddenly has a great appeal for Barrie, née Brookes.

The family possesses nine of the small notebooks, and for decades they were kept in a cabinet in her brother's house. But the 80-year-old woman recently decided to turn the diaries into a book, complete with footnotes and images. The book, "A Signaller's War," is her contribution to the 100th anniversary of the war's beginning.

The book and how it came about are illustrative of how the British remember the "Great War." They are proud of their ancestors and their victory over the Germans, although they prefer to avoid triumphalism. For them, the four years that began in 1914 are an important chapter in the glorious past of the British Empire.

Barrie, who lives in Purley, a half-hour train ride south of London, is a vigorous woman who laughs easily and often. Her brother Bobby, 84, and her husband John, 82, are sitting next to her. All three are still familiar with World War I from the stories they heard firsthand from the soldiers of the day. "Our father also had a lot of fun in Belgium too. It wasn't all destruction," says Barrie.

The last British veteran of World War I, a woman who had waited tables in a Royal Air Force officers' mess, died two years ago at 110, but the remembrance machine is already running at full speed nonetheless. The BBC will fill almost 2,500 broadcast hours with documentaries, historical dramas and discussions, and the Imperial War Museum is placing an enormous archive of portraits, letters and notes written by soldiers during the war on the Internet. The diary of Una Barrie's father is only one of many eyewitness accounts that are now being published.

'Eager to Join the Army'

It was never easy to escape the Great War in Britain. The national War Memorials Archive, for example, lists 844 obelisks throughout the country that commemorate the years from 1914 to 1918. But the country is now preparing for the centenary of World War I as if it were a national public festival. Official ceremonies will begin with a celebration in Glasgow in August, in which Queen Elizabeth intends to participate. A load of sandbags with "sacred soil" from 70 Belgian battlefields, which arrived in the British capital in late November, will be used to build a memorial near Buckingham Palace. The government plans to spend £55 million, or about €66 million ($90 million), on the ceremonies.

In the summer of 1914, it didn't take Barrie's father long to think about whether to enlist. He spent hours waiting impatiently outside a military barracks in London. "We were all so eager to join the army," he wrote in his diary. He was 21 when he landed in Le Havre with his unit, the 16th Battalion of the London Regiment. But the euphoria among the young men quickly subsided. The war was cold and harsh, a time of sleepless nights spent in muddy trenches.

Bernard Brookes carried a rifle with an attached bayonet. His task was to bring messages from the rear command stations to the fighting troops. "He had an important job," says Barrie.

Bobby's mobile phone rings, but his fingers are shaking too much to operate it, and the ringing stops after a while. His sister says that the thought of a war being celebrated with so much fanfare makes her uncomfortable. The rest of her family is also apprehensive about how far the celebrations should go. "But you have to deal with this anniversary in some way," says her husband. It's a sensitive issue, her brother Bobby says quietly.

Stories of Past Triumphs

In a YouGov survey conducted in July, a large majority of Britons said that the roughly 15 million war dead must be commemorated, and that it is important to ensure that such a war never happens again. A third of respondents said that the commemorative events should focus on the British victory. Conservative Oxford historian Hew Strachan, known for his political and historical provocations, warned against degrading the event of a century into an ordinary anniversary, and allowing it to become "sterile and boring." In other words, the British should not make the mistake of paying too much attention to the feelings of their friends in Europe.

British patriotism has been spreading to all levels of society for years, which partly explains the growing interest in 1914. In addition, many are still struggling with the consequences of the financial crisis and are only too willing to escape into the heartwarming stories of past triumphs.

Most Britons already take a critical view of Europe. They fear immigrants from Bulgaria and Romania, who they claim are coming to their country to loot the social welfare system. This fear could bring the conservative, anti-European UK Independence Party (UKIP) many votes in the European Parliament election in May, which in turn puts pressure on Prime Minister David Cameron's Conservative Party. The commemoration of World War I offers the government the chance to invoke patriotism and gain the support of a portion of the population.

Cameron has turned the commemorative events into a personal matter. At the same time, he must be careful to avoid alarming Germany and his other European partners with overly nationalist rhetoric. "We will not wave any flags in a militaristic or jingoistic way," says Andrew Murrison, Cameron's special representative for the Centenary Commemoration. Murrison has met several times with his German counterpart, Andreas Meitzner, to prevent misunderstandings. Still, there are differences between the two countries. "At any rate, I don't see a great enthusiasm in Germany to commemorate the war," says Murrison.

For signaller Bernard Brookes, the father of Una Barrie, the war soon became unbearable. In early August 1915, he jumped into a bomb crater to avoid a hail of German shells, only to find himself lying next to two dead comrades. His entire body went into shock. Although he remained physically unharmed, it would be his last day in the war. He was removed from the front, a traumatized, broken invalid.

As a result, he missed the great Allied offensive, which culminated in the gory battle between the British and the Germans along the Somme from July to September 1916. It was the largest and most savage battle of the war, in which a million men died or were wounded. It did not produce the breakthrough the Allies had hoped for, although it did deal a significant blow to the morale of German troops.

Brookes slowly recovered from his trauma. "He remained stuck in the war," says his son Bobby today. His father died in 1962, but throughout his life he often spoke of "the war," as if there had only been one. He was also very irritable and had weak nerves, says Una Barrie.

His diary presented the family with an opportunity to collectively come to terms with the traumatic events Bernard Brookes never wanted to face. Barrie's nephew digitized the diaries' text, her daughters designed the cover and formatted the manuscript, and her son-in-law scanned photos and postcards. "It was an enormous project for the family," says Una's husband John.

In recent years, the couple made several trips to the old battlefields in Belgium and France, where Una's father ran through the trenches and John's uncle died. The war happened almost 100 years ago, and yet it still occupies the Barries today.