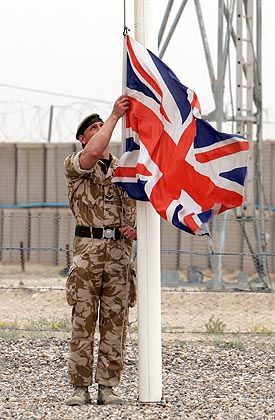 The British Army has pulled out of Basra.

There is little talk in Britain of "surges" or a "final push" in Iraq. An orderly retreat is a more apt description of the British strategy four and a half years after the Iraq War began. And full withdrawal came one step closer on Monday when British troops pulled out of Basra, leaving Iraq's second biggest city without a multinational force for the first time since the invasion in 2003.

The 550 British troops left their base in a former palace of Saddam Hussein, which had been under almost daily rocket and mortar attacks, and joined the last British stronghold in Basra Airport. The handover took place under cover of darkness, while the city was under curfew.

By dawn on Monday morning Iraqis soldiers were guarding the palace. "At 4:30 this morning, the British forces completed their withdrawal  and the Iraqi army took responsibility for protecting the palace," Iraqi Gen. Mohan al-Fireji told reporters.

In a statement, the British Ministry of Defense said handing over the palace had "long been our intention." Britain has already handed over control of three provinces in southern Iraq to the Iraqi authorities. The ministry said British forces would retain overall security responsibility for Basra until the handover to provincial Iraqi control, expected later this year. There are now 5,500 troops stationed at Basra Airport.

People on the streets of Basra Monday cheered the departure of the British troops. "We reject any strangers and they are colonialists," resident Rudha Mater told the Associated Press.

The withdrawal comes as volleys in a war of words continue to be fired across the Atlantic. Commentators in the US media have been suggesting for weeks that the British have failed in Iraq and are preparing to flee. Britain's Defence Secretary Des Browne and Foreign Secretary David Miliband took the unusual step of publishing an editorial in the Washington Post last week defending the UK's role in Iraq. "We believe we remain on track to complete the return of full sovereignty to the Iraqi people as planned," they wrote. "The United Kingdom is sticking to the mission we took on four years ago."

Then, over the weekend, two retired senior British officers upped the ante by lashing out at what they see as US incompetence in Iraq. Maj. Gen. Tim Cross, who was Britain's most senior officer involved in reconstruction efforts in Iraq, said he had talked to former US Defense Secretary Donald Rumsfeld about the need to have international support and enough troops on the ground to reconstruct the country. "He didnt want to hear that message. The US had already convinced themselves that Iraq would emerge reasonably quickly as a stable democracy," he told the Sunday Mirror. "Anybody who tried to tell them anything that challenged that idea -- they simply shut out."

His comments came a day after the Daily Telegraph quoted Gen. Mike Jackson, commander of the British army during the invasion, describing Rumsfeld's policy as "intellectually bankrupt" and criticizing the Pentagon for discarding detailed plans drawn up by the State Deparment for post-conflict Iraq. "It was an ideological article of faith that the coalition soldiers would be accepted as a liberating army," he writes in his forthcoming autobiography which is being serialized by the newspaper.

While the withdrawal from Basra is unlikely to do much to improve relations with Washington, it will undoubtedly prove popular back home in Britain. Prime Minister Gordon Brown, who took over from Tony Blair in June, has refused to give a timetable for a full withdrawal from Iraq. But Brown is contemplating an early election and he is undoubtedly aware that the war was deeply unpopular with the British public from the start and was instrumental in forcing Blair's early departure from office.