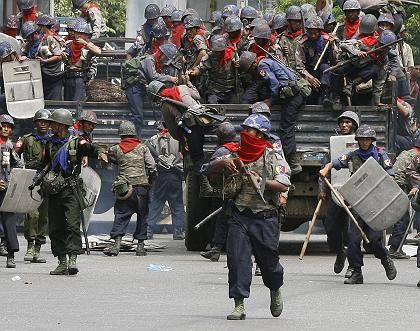 Riot police and military personnel crack down on the protests in Yangon last week. There are reports of a brutal crackdown at night, with hundreds of people killed.

It is 9.15 p.m. on Tuesday evening in Yangon, the time of day when the stranglehold of fear settles across the city. The first heavily armed soldiers take position outside the few restaurants that still serve foreigners. Curfew starts at 10 p.m. After that, anyone who is still out on the streets is risking their lives.

"Take a bicycle to the street to grab a taxi," the manager of L'Opera, an Italian restaurant, yells into the kitchen. The foreigners, waiting in the courtyard, can't find any more rental cars. Someone dashes out to look for some kind of transport.

It is completely quiet for a moment in the car park. Then a young man emerges from the darkness. He was obviously waiting for a chance to be alone with foreigners. He is poorly clothed, but speaks English that is somewhat understandable. "Please dont believe what the junta says," he whispers. "The repression is continuing every night. When there are no more witnesses, they drive through the suburbs at night and kill the people."

The young man wanted to tell his story quickly. He knew that he couldnt let himself be caught doing so -- otherwise he could soon find himself in jail or dead. He comes from South Okalapa, a huge township east of Yangon, where there is hunger and misery. Most of the monks who demonstrated against the regime last week came from there. After the junta's troops finally crushed the unrest in the city center on Saturday, they took their brutal revenge in Okalapa on Sunday.

It was around midnight when the long convoy of military vehicles drove into the district. They contained police officers from the anti-insurgency unit and the so-called "Lome-Ten," a unit of gangsters and ex-convicts, who do the regime's dirty work.

They surrounded a monastery on Weiza Yandar Street. All the roughly 200 monks living there were forced to stand in a row and the security forces beat their heads against a brick wall. When they were all covered in blood and lay moaning on the ground, they were thrown into a truck and taken away. "We are crying for our monks," said the man, and then he was gone.

Four days have passed since the last shots were fired in central Yangon but normality has yet to return to Burma's largest city. Most shops remain closed today and the human rights violations continue. Horrifying rumors and news of further repressive measures continue to leak out.

These rumors are difficult to confirm as journalists are not allowed to work in the country. The few correspondents who are left in the country on tourist visas are being observed day and night. Secret service spies waylay them at their hotels. And even if the regime doesn't dare to execute another foreign journalist following the death of the Japanese photographer last week, it's still impossible to conduct normal reporting and research.

Every Burmese whose name appears in the international media has to fear for his life. Even foreigners living in the country are opting for silence, for fear of persecution. But the rumors and stories circulating in the city paint a horrible picture. It's clear that Yangon has done away with almost all of its monks.

In the huge monastery complex under the Shwedagon pagoda, only the red and saffron coloured robes of the holy men are left to blow in the wind. There are no traces of the several thousand monks and novices that once leant this place its unique and peaceful air.

A deadly silence has also settled into Yangon suburbs like Okalapa or Takada, where young monks from other provinces can normally come to learn to read and write at small religious institutions. But these have been shuttered, their entrances barricaded with iron doors and rubbish is piling up on the premises. The monasteries, temples, schools and orphanages in the surrounding area are empty.

"We are assuming that the number of victims among the monks and protesters last week goes well into the hundreds," says one diplomat, speaking on condition of anonymity. Clearly security forces in both suburbs have engaged in major crackdowns. As the junta's henchmen tried to remove the monks on Sunday and early this week, residents of both districts resisted, and many of the demonstrators are believed to have been shot.

"Our students have gone back to their home villages for the time being," the abbot of one Okalapa monastery says. But that's only half true. Diplomats here have fairly reliable information that the junta has built at least three internment camps in recent days in Yangon, where it has placed opponents of the regime.

One is located near the old British horse race track, between Yangon's 50th and 51st streets. Another camp is located near the Mingala international airport. The worst conditions, though, are to be found on the grounds of the Yangon Institute of Technology.

In the north-western part of the former Burmese capital, very close to the notorious and overflowing Insein Prison, about 300 cells have been erected in recent days -- each measuring 3 meters by 3 meters (9.8 by 9.8 feet). Close to 800 monks have been imprisoned there. Sanitary conditions are atrocious and the monks are engaging in a hunger strike. Just as they did during their protests, the monks are refusing to accept any food handouts from the military. Meanwhile, the armed soldiers have stopped locals from trying to bring any food to the monks. And if the authorities don't provide international organizations with access to the camps soon, it will be a matter of time before there are further deaths.

But although the situation appears hopeless, the British ambassador -- of all people -- sees a first glimmer of hope in the chaotic situation. Mark Canning sits in his high security office with a view of Yangon port. He is a large man with a youthful face, and wears a white shirt but no jacket or tie. He is surely not a typical representative of the Foreign Office. Canning appears to regard finding a solution to the conflict in the country, which was once Great Britain's wealthiest colony in Southeast Asia but finds itself today in abject poverty, as his own personal mission.

Canning exploits his room for maneuver right up to the limits of what is possible for him as a diplomat. During the uprising, the ambassador constantly gave live interviews to the BBC about the situation in the country. "If the events achieved one thing, then it is the fact that the international community is now united in its condemnation of the regime," he says.

He repeats the word "revulsion" several times. It was the word used by the otherwise very reserved ASEAN, the community of the Southeast Asian states, to condemn its member country Burma over its crackdown on the uprising.

For that reason, Canning believes that the process of dialogue which the United Nations has initiated with the Burmese military regime could soon show its first results. After his arrival in Burma on the weekend, the UN special envoy for Burma Ibrahim Gambari met with opposition leader Aung San Suu Kyi, who is under house arrest. Then he met Tuesday morning with junta leader Than Shwe in the new capital Naypyidaw.

Canning pins particular hope on the Chinese. The generals could not survive for long without the economic assistance of Burma's northern neighbor. "The Chinese have made it clear to Burma that they want stability and peace on their southern border," says Canning. Admittedly the Chinese aren't talking about democracy, Canning says, but perhaps they can help to establish dialogue between the military and Aung San Suu Kyi. That way, the hunger and misery in Southeast Asia's poorest country could be alleviated -- which is exactly what the demonstrating monks had been demanding from the junta.

Editor's Note: For security reasons we are not naming our correspondents in Burma.