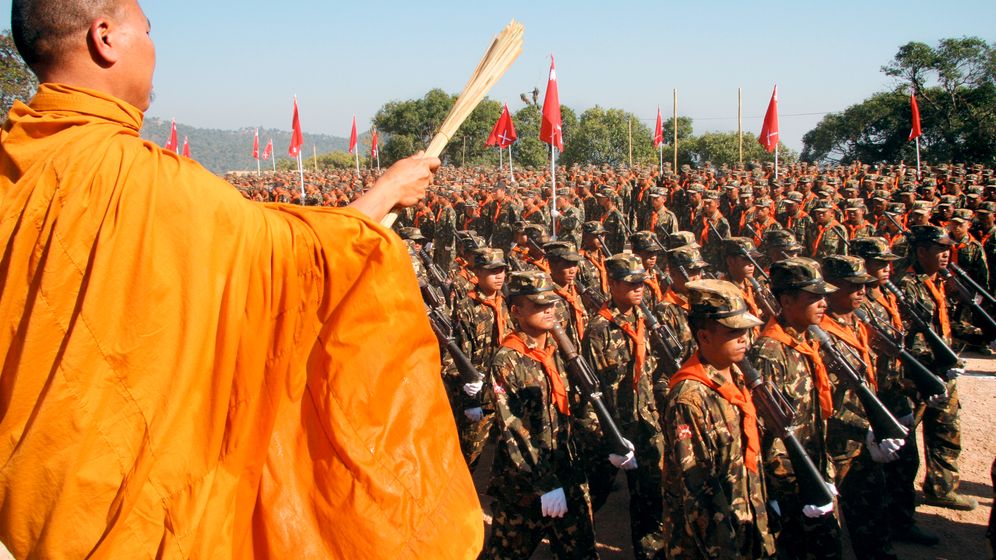 The village of Doi Tailaeng, on Burma's border with Thailand, has been transformed into a military camp. For hours, columns of uniformed fighters have been marching through this outpost of the rebellious Shan people, which feels oppressed by Burma's majority ethnic group, the Burman. There are several thousand rebel soldiers in Doi Tailaeng, and they have just completed their military training. The dust rises under the boots of the recruits. The Shan national festival is solely a show of power.

The militia fighters repeatedly point their guns at the sky and fire salvos into the clear mountain air, accompanied by the deafening noise of drums and fanfares. At the end of the parade, a Buddhist monk blesses the rebels of the "Shan State Army - South" with holy water.

Until now, it has only been the remoteness of this mountainous border region that has kept his men from being wiped out. Other rebel groups have also doggedly kept up their struggle against the clique of generals in the new Burmese capital, Naypyidaw, including the Karen National Liberation Army and a handful of militia organizations fighting for other ethnic groups.

Most of the country's other ethnic minorities and their fighters signed a truce with the government in 1989, in return for being granted extensive autonomy in their regions. They were also permitted to keep their weapons and go about their business, which includes growing opium, producing methamphetamines like Crystal Meth and operating casinos in the border region near China.

The warlords are running a profitable business in the Golden Triangle, but the fragile peace has come at a high price. Within the last three years, the amount of land devoted to growing opium has grown by almost 50 percent, to 31,700 hectares (78,300 acres). Pills produced in Burma are now flooding the rest of Southeast Asia.

These drug revenues are then used to fund powerful armies. The militia representing the Wa ethnic group, the United Wa State Army (UWSA), which formed in 1989 after the collapse of the China-backed Communist Party of Burma, is estimated at about 25,000 combat-ready troops.

But now the fragile peace is at risk. The junta plans to hold an election this year and use it to cement its power. Foreign observers and critics in Burma say the election will be a farce. For example, the country's election laws, which the junta has fashioned in its favor, expressly prohibit Aung San Suu Kyi from participating in the election. The 64-year-old Nobel Peace Prize Winner has been under house arrest for years.

The ethnic minority armies operating in Burma's border regions could now prove to be a much bigger threat to the government than Burma's icon of freedom, Suu Kyi. The government has given the militias an ultimatum: Either their fighters allow themselves to be voluntarily integrated into the regular border troops, thereby partly submitting to the command of the Burmese army, or the army will disarm the militias by force.

So far few of the many combat groups have indicated a willingness to give in to the junta's demands. For most, integration into the border troops would amount to capitulation. As a result, two unequal sets of adversaries face off in the largely impenetrable jungle regions of the northeast, eying each other warily. The junta is apparently serious about its plans to break up the groups of armed ethnic fighters.

Under the pretense of removing an illegal weapons factory in the region inhabited by the Kokang people near the Chinese border, the army attacked its militias in August 2009 and drove about 37,000 Kokang into neighboring China. Since then, a warlike state has prevailed in this part of Burma, and it now threatens to expand into a guerilla war between unequally matched adversaries, a war that could last for years and that no one can win.

The leader of the SSA, Yawd Serk, is openly preparing his troops for new battles. From his command post in the mountains, he has a good overview of the surrounding terrain. The rugged mountains along the Thai border form a natural and almost impenetrable fortress. Not far away, trenches permeate the green hills, while the Wa army lurks behind the hills.

"Perhaps we will be fighting the government together soon," Yawd Serk says hopefully. "We know that the Wa military leaders are itching for a fight."