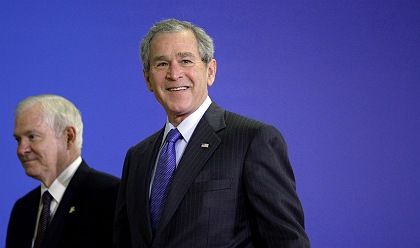 US President George W. Bush is still piling on the pressure for Berlin to help shoulder the burden in Afghanistan.

Just before this week's NATO summit in Bucharest, it had seemed as though harmony would prevail. German diplomats and strategists from the Chancellery seemed particularly giddy, with some even saying the summit would be "cuddly" -- a peaceful farewell gala for US President George W. Bush and outgoing Russian President Vladimir Putin.

Ironically, it was Bush himself who had triggered the Berlin bliss. Often a major thorn in Germany's side for his demands that Berlin take on a greater combat role in Afghanistan, Bush's tone in a recent interview with German daily Die Welt had seemed full of comprehension for the political difficulties facing Chancellor Angela Merkel. In the interview, he indicated he would no longer ask Berlin to send combat troops to the more dangerous southern part of Afghanistan. The US President said he recognized that the German people, and by extension the German parliament, would be unable to stomach such a demand.

Suddenly the Bucharest summit, attended by Chancellor Merkel, Defense Minister Franz-Josef Jung and Foreign Minister Frank-Walter Steinmeier, looked like it was going to be a walk in the park. "Bush doesnt want any fighting at his farewell summit," was the assessment of one Berlin analyst. "We won't be put through the wringer this time."

But on Wednesday morning the joy about this new tone from Bush was revealed as being premature. Arriving a day earlier than his NATO colleagues in Bucharest, the US president laid out his true maxims for Afghanistan under the glass dome of a bank in the Romanian capital. The alliance would have to "maintain its resolve and finish the fight," Bush said. And then he repeated his old line: "We expect our NATO allies to shoulder the burden necessary to succeed."

There he was again, the old Bush, the one who wants more engagement from the Europeans -- and from Germany. And more clearly than ever, Bush also demanded that a tough line be taken against Iran and Syria. He was also uncompromising in his insistence that Ukraine and Georgia be promised membership of the NATO club. In the past, Bush has often seemed uncomfortable during trips abroad. This time, however, directness was the name of the game. After all, Bush is fighting for his political legacy.

When it comes to Afghanistan, there is no denying the US has a strong argument. The US, Great Britain, Canada and Australia are providing around 60 percent of the 43,000 ISAF soldiers in Afghanistan. And they have suffered a disproportionate number of casualties since the fighting started in 2001. While those countries stationed in the south and east of the country have lost around 650 troops, the other nations, including Germany in the north, have only lost 115.

The Canadians, who have lost a number of troops since their deployment to Kandahar in southern Afghanistan, are taking a similarly tough line. They have threatened to pull their troops out of the country if they do not receive reinforcements from Europe. Neither the 1,000 soldiers that France's President Nicolas Sarkozy is planning to send nor the small troop numbers committed by other countries, such as Belgium, look to be enough to satisfy them. The pressure on Berlin will not abate.

It is clear that Berlin's hopes for an end to the debate were naive. Even if it were true that Bush had grown tired of the discussion with Berlin and had simply given up, all of his potential successors -- both Democrats and Republican -- have made it clear that when it comes to the demands for more Europeans to go to the frontline in Afghanistan, there will be continuity in Washington.

Nevertheless, in recent months, the current administration has realized that outright demands, such as those made by Defense Secretary Robert Gates last year, dont get them very far. In a harsh letter Gates had urged Berlin to send German troops to southern Afghanistan. Since then Washington has understood that Merkel's governing coalition would have little choice but to reject such demands due to domestic political concerns.

Since then the US has opted for a more soft-handed diplomacy, a kind of acupuncture policy of inflicting tiny amounts of pain.

The German military in Kabul has already come to the realization that the requests for help outside the north are not going to cease. Indeed, plans have been circulated for refusing such demands by ISAF Commander Dan McNeill or his successor. At the same time, however, German commanders have dropped their opposition to taking part in operations in the western or eastern parts of the country, should the need arise.

McNeill had made it clear before the Bucharest summit that he would be all too happy to see the Bundeswehr deployed outside of the north. He knows the German troops well -- and is not shy about praising them. He goes into raptures when talking about the Bundeswehr's airborne forces. He already has visions of them fighting in Kandahar.

And the pressure is not likely to wane. The position of Supreme Allied Commander Europe (SACEUR) will soon need to be filled. The new man set to take over this extremely important strategic position is the current top commander in Iraq, General David Petraeus. That's not exactly a signal from Washington that it intends to end its aggressive line in Afghanistan.