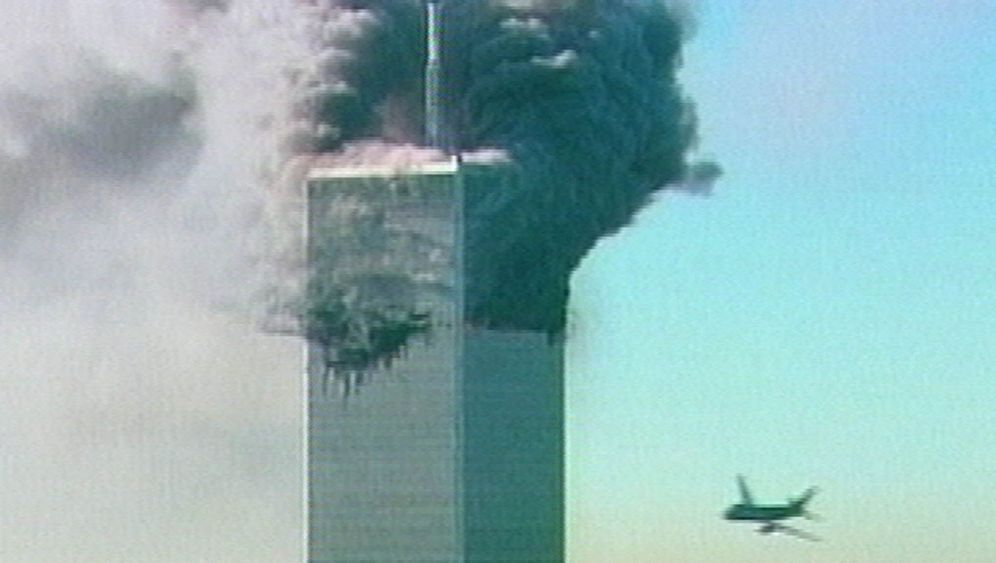 Photo Gallery: A Day of Horror

The smoke was still rising from the rubble of the World Trade Center when Richard Armitage, at the time the US deputy secretary of state, spoke in the aftermath of the 9/11 attacks. "History begins today," he said.

In the coming decade, Armitage would turn out to be right -- except the politician could not have foreseen how tragic the history would be following the epochal event.

It is the history of the decline of the USA as a superpower.

Immediately before the attacks, this country was in full bloom -- like Rome at its peak, as TV host Joe Scarborough recalls today.

The Republican President George W. Bush had inherited a fat budget surplus from the Democrat Bill Clinton. In Kosovo, the US, which Madeleine Albright dubbed "the indispensable nation," had just shown the Europeans how it could resolve conflicts, even in their own backyard. Bill Gates and Microsoft were still cool.

Then came the planes, piloted by the followers of Osama bin Laden -- and for a brief moment, the superpower seemed even more powerful than ever. Palestinian leader Yasser Arafat had himself photographed donating blood for the victims. Even the French all suddenly wanted to be Americans. German Chancellor Gerhard Schröder promised "unlimited solidarity."

What followed was an unlimited mistake. Bin Laden had hoped to entangle the Americans in bloody wars. How well he would succeed in doing this, he probably could not have imagined himself.

America was trapped in Iraq for years, where a victory was a long time coming and was never a real one. It is currently trapped in Afghanistan, where victory no longer even seems possible. And it is trapped in an embrace with its ally Pakistan, which it does not trust and yet cannot release.

These are costly defeats for America and the rest of the world. According to a conservative estimate by Brown University, there have been almost 140,000 civilian casualties in Afghanistan and Iraq. The massive retaliation cost more than $3 trillion (€2.2 trillion) -- dollars that would have been better used in America's schools or in the wallets of US citizens.

For a short time after the attacks, the country seemed united. Americans embraced each other. Even the cold city of New York suddenly seemed warm. But instead of cultivating public spirit, President Bush sought to find a pretext -- any pretext -- to invade Afghanistan and Iraq. This is his most tragic legacy, the fact that America can no longer even mourn its victims properly -- because Americans have long been not just victims, but also perpetrators.

But the decade of terror did in fact traumatize Americans and turn them into victims -- even those who only experienced the attacks on television.

A Country at War with Itself

Today, following all the Bush-era tax cuts, the US is a deeply divided country in social terms. The gap between rich and poor is almost as great as it was in the days of oil barons and steel magnates in the last century. Five percent of Americans buy almost 40 percent of all consumer goods sold in the country.

The country is at war with itself. It has a Congress where there is perpetual conflict between the right and the left -- and where they don't even want to talk to each other when the threat of a national bankruptcy looms.

Like no other country, the US became great because of its openness. Now, it has become distrustful, fearful and defensive -- against Muslims, against foreigners, against anyone who is different. Citizen militias hunt down illegal immigrants, and many people can still not accept having a black president in the White House.

"American exceptionalism" was always the US's trump card. The new candidates for the White House still refer to it in the election campaign, but it sounds like a hollow mantra -- one of those election promises that shouldn't be examined too closely.

Because if it was, then people might realize that many things in America are only exceptional because they are exceptionally bad. The country has lousy health statistics despite having one of the most expensive health care systems in the world. Then there are the billions wasted in the education system, not to mention the armaments madness -- the US spends almost as much on defense as the rest of the world put together.

And then there is the fixation on a financial system that rewards gamblers, where the country's most talented young people no longer work on developing new patents, but devote themselves to financial wizardry. Meanwhile, China and other emerging economies can happily concentrate on their own ascent.

Estranged from the Rest of the World

Where has that one-of-a-kind America gone? New York Magazine sums it up: "Ten years later, America now looks a bit more like other countries do -- our embrace of capitalism has grown more complicated, our class mobility less certain, our immigrants and our diversity less unique."

Even in foreign policy, the world power is no longer seen as the world's role model. "Leading from behind" is the maxim of the current president, Barack Obama. He says it out of necessity, because stateside a strange alliance has formed, between those on the fringes of mainstream politics both on the left and on the right.

They want to turn America into a tight-fisted world power. They only want one thing: US troops should come home, and then other countries should see how they fare. After all, the isolationists argue, these other countries don't understand America anyway.

This was most evident on the day that bin Laden was killed. Americans cheered spontaneously on the streets when they heard the news. But many people in other parts of the world did not want to celebrate with them. They reacted with agitation to the openly flaunted joy over the terrorist's death. The alienation of the others often sounded patronizing and self-satisfied.

But it underlined the fact that the victims of the attacks were no longer in the foreground. Instead, the sins of the original victim were brought into focus -- America's sins. The superpower, to a large extent, only has itself to blame. But that is still sad nonetheless. 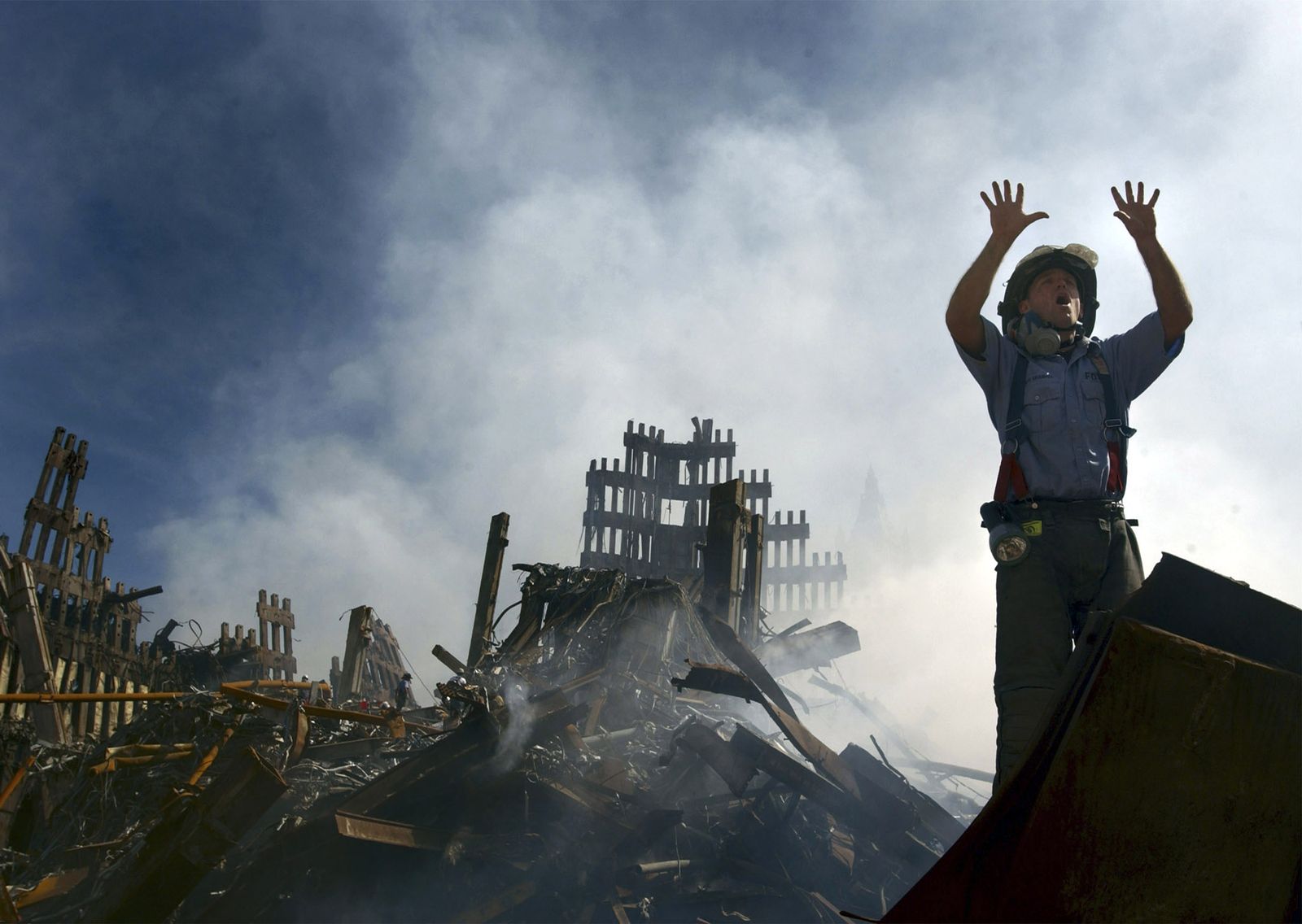 Rescue teams comb through debris in the days after the attacks. This man calls for reinforcements.