Aaron Vanderpool trudges through ankle-deep snow with an iPad in his right hand and a small yellow GPS receiver in his left. He's searching for the future of the California forest. The map on his display shows five squares comprised of red and green dots.

"This is how we find our trees," says Vanderpool, a forest ecologist with the Tahoe Environmental Research Center at the University of California, Davis. The technological help is important, too, because so far very few of the freshly planted sugar pines exist. Without Vanderpool's iPad, it would be easy to overlook the small seedlings, nestled as they are between towering white firs, incense cedars, ponderosa and Jeffrey pines in the forest at Kings Beach, with some reaching 50 meters (164 feet) or more into the sky.

The hope is that the sugar pines, which belong to the largest of all pine species, will grow to become giants one day. Some specimens can grow to more than 80 meters tall and 3 meters thick. But in California, many of the trees die long before that. The small sugar pines here, however, have been planted with one thing in mind: survival.

At Lake Tahoe, around 1,900 meters above sea level in California's Sierra Nevada mountain range, Vanderpool's boss, forest ecologist Patricia Maloney, is on the lookout for types of trees that are especially well-suited to the challenges of the future. Challenges that are indeed formidable: Between 2012 and 2016 alone, experts estimate that around 130 million trees died in California. Most are still standing in forests today.

Mass Mortality After Years of Drought

“In many places the population of the sugar pine decreased dramatically,” Maloney says. Years of drought caused the die-out. The lack of water hit the species particularly hard because it likes to grow on south-facing slopes where not much snow accumulates. Bark beetles also attacked the trees, which were already struggling with a lack of water. Pine trees normally defend themselves against the insects by producing large quantities of sticky resin, but they need to have enough water to do so.

During hikes through the Lake Tahoe basin, Maloney noticed something odd: “I observed green and dry trees side-by-side.” It turns out that certain types of the species can better cope with adverse conditions than others. The researcher calls them "survivor" trees.

A dead tree: Maloney noticed when tracking trees that some survive.

In laboratory studies, Maloney and colleagues were able to prove that these trees can indeed use water more efficiently than others. The researchers also discovered that the trait appears to be hereditary.

So, Maloney had cones collected from 100 surviving trees at various locations around the lake. Her husband Tom Burt took responsibility for the task. Burt is a former professional snowboarder with 35 years of experience in freeriding on some of the world's most extreme slopes. He's been supporting his wife's work for years.

Burt took a catapult to shoot a rope high into the branches of the trees and then shook them vigorously, causing snow cones to fall to the ground. The sugar pine's cones are spectacular. The cones, which can grow to up to 60 centimeters long and 25 centimeters wide, open up and release their seeds as they dry.

Patricia Maloney: The pine cones produced by the sugar pine can be impressively large.

The researchers used the seeds obtained from the cones to grow a new generation of more resistant pine trees. By doing so, they're hoping to jump start evolution.

The genetic make-ups of individual trees of a particular species differ slightly from one another. If steps are taken to ensure that the favorable genetic traits are passed on to help fight the conditions caused by drought, it can make the population more capable of surviving. At least that's the hope.

At first, the young pines are grown into seedlings at a U.S. Forest Service nursery before being transplanted to a greenhouse at the University of California field station in Tahoe City. Last fall, there were still 10,000 trees here, but 2,500 have since left the facility. They were planted by volunteers with the California Conservation Corps at various places around the lake, just like the specimens in the forest at Kings Beach.

Seedlings at the University of California, Davis field station in Tahoe City

At the very least, the young trees won't be lacking moisture in the coming weeks because the Lake Tahoe area often gets a lot of snow in the winter. The researchers want to plant another 2,500 sugar pines in the forests this spring.

'I Have Zero Money for My Lab'

Maloney says sugar pines once comprised around one-quarter of the tree population at the lake. But in the late 19th century, the trees fell victim to clear-cutting, with loggers decimating around 95 percent of the population. The researcher says the clear-cutting caused severe damage to the species' genetic diversity. The remaining trees had to struggle with a plant disease called white pine blister rust and also the bark beetle.

Maloney's project alone won't go far enough to ensure that California's forests are enduring in the future. The researcher says her primary goal is to show that her approach -- reforestation with more resilient specimens of native species -- can be effective. If she proves successful, the model could also be interesting for a country like Germany.

In Germany, drought, pests and storms have also taken their toll on many forests. Around 180,000 hectares (nearly 445,000 acres) of forest are considered irreparably damaged. "Patricia Maloney's approach is based on an often underestimated potential -- genetic diversity and natural selection that are available at the local level," says forest ecologist Pierre Ibisch of the Eberswalde University for Sustainable Development.

He says that trees in German forests are also exposed to complex selection pressure. "It seems obvious to extract seeds from trees that are clearly better able to withstand all these adversities." 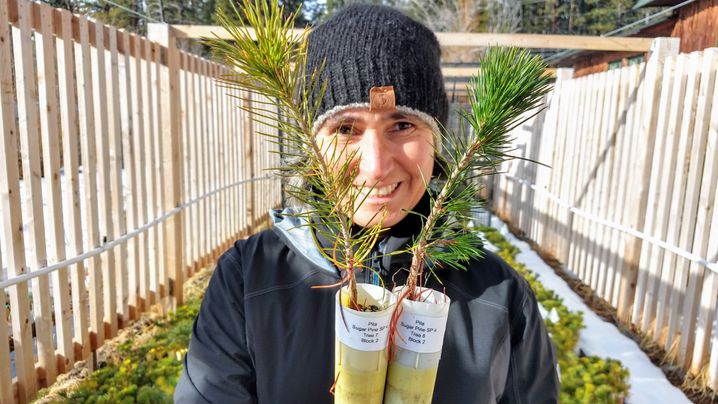 In Germany, the government has declared its aim of promoting mixed forests with a broad spectrum of native tree species adapted to the respective location. The government has even earmarked 800 million euros ($887 million) for this to happen.

But Maloney, for her part, is lacking in funds. The researcher would like to continue monitoring the growth of her newly planted trees for at least the next three years, but this would require finding financial backing for the project. Her position at the university is already funded, but her work with the survivor trees is not.

She applies for grant after grant to make it work. So far, though, Maloney has only been modestly successful in that endeavor. "I made it to the cover of the Los Angeles Times," Maloney says, "But I have essentially zero money for my lab." 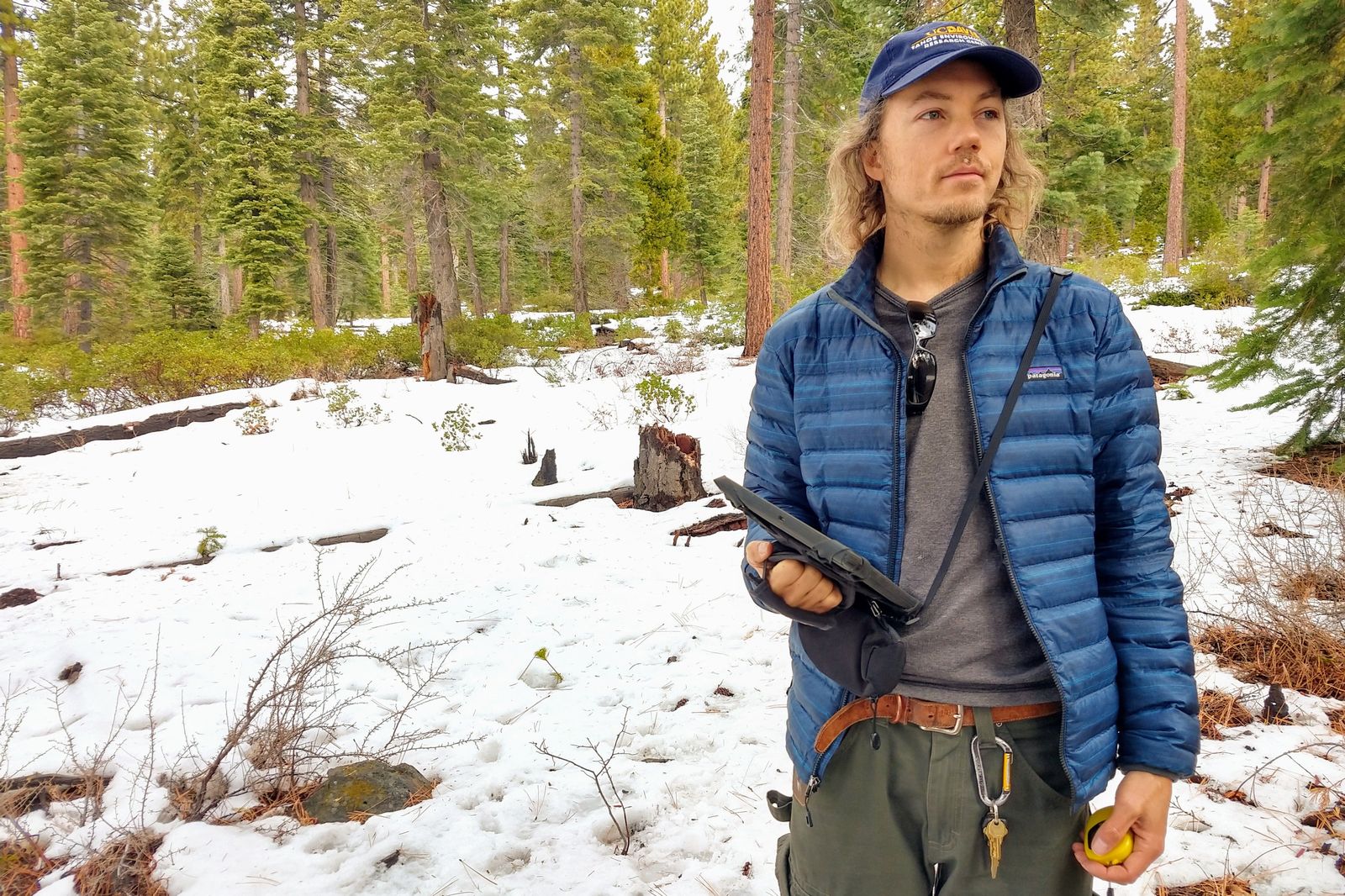 Researcher Vanderpool uses his iPad to hunt down small pine trees in the forest. 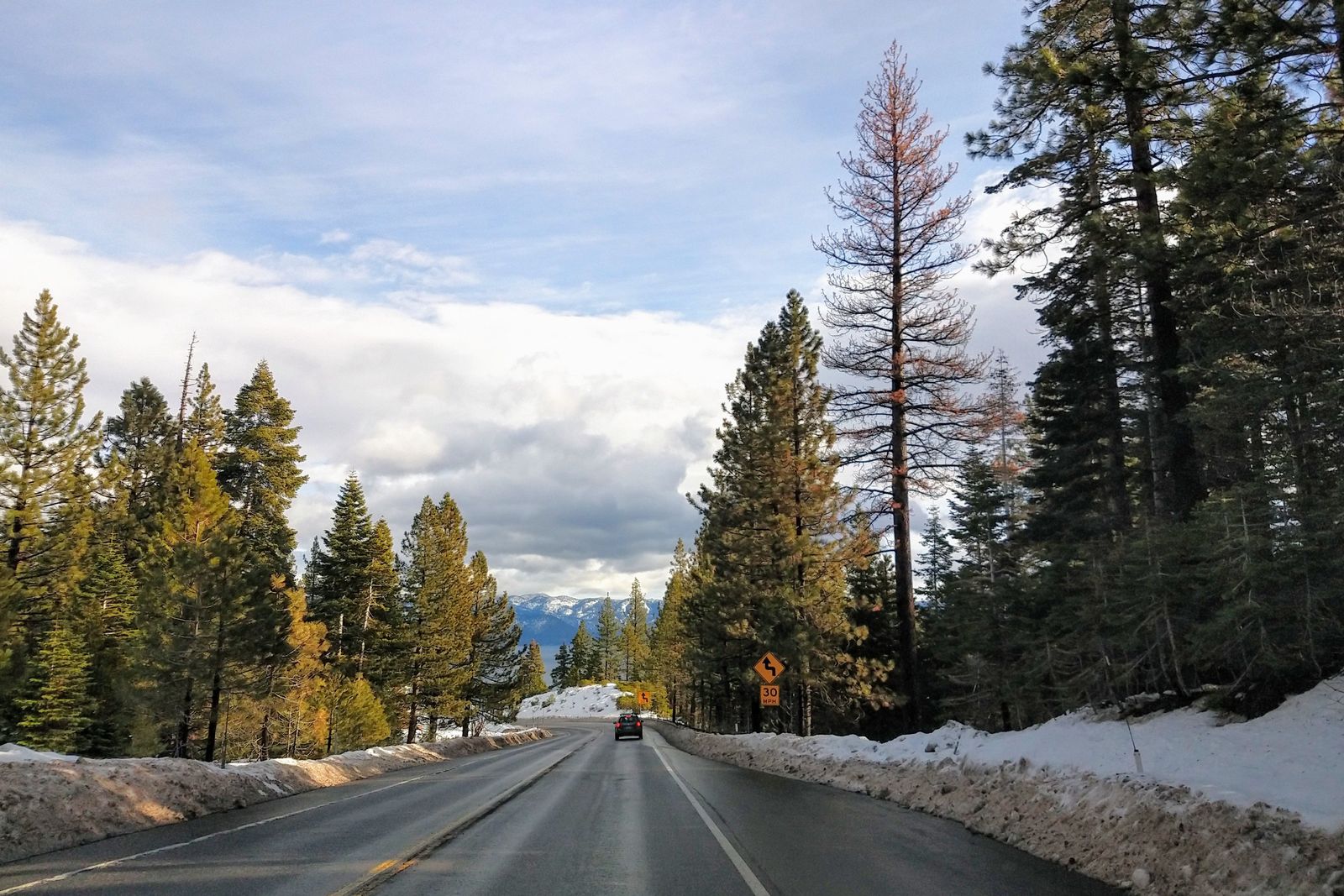 A dead tree: Maloney noticed when tracking trees that some survive. 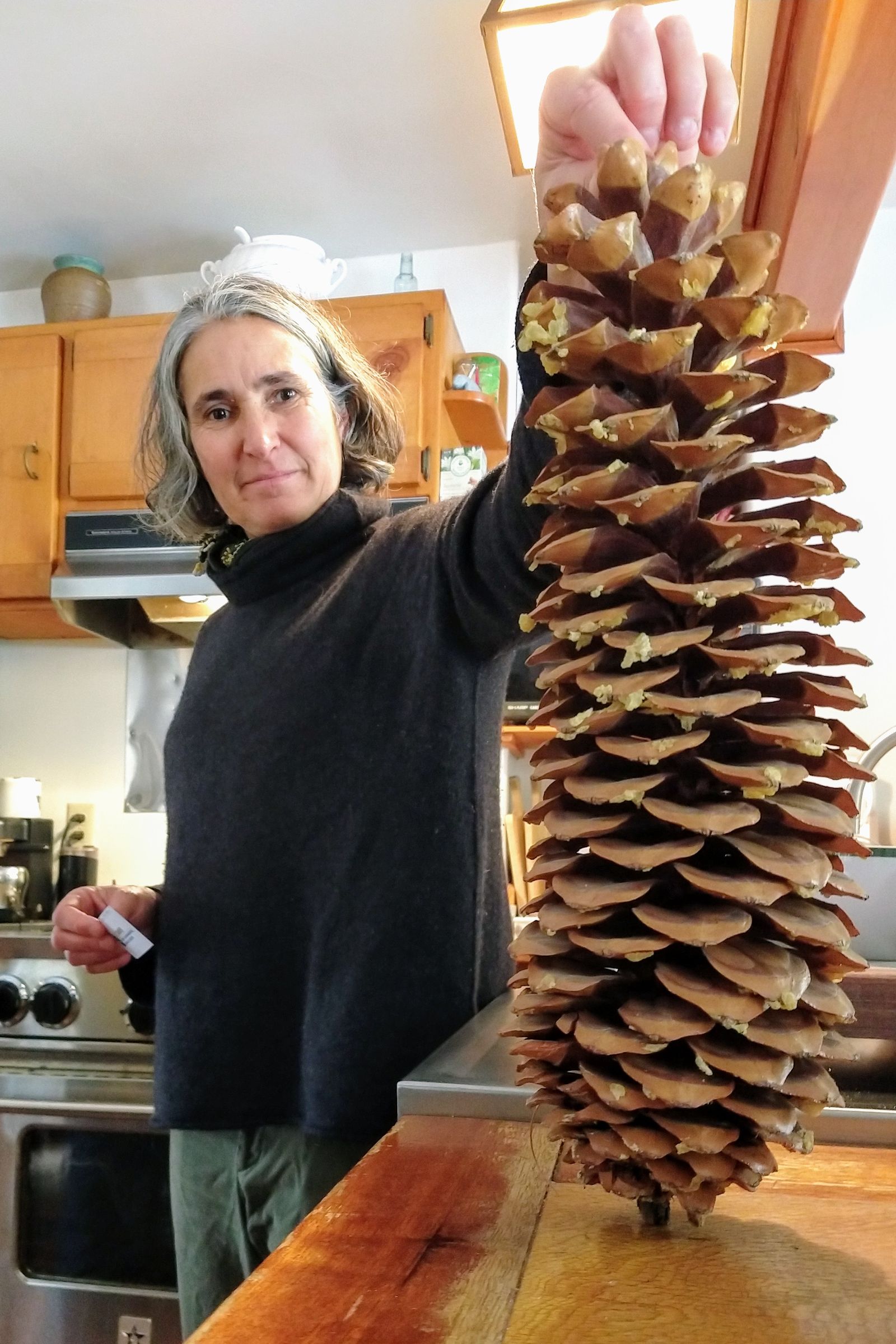 Patricia Maloney: The pine cones produced by the sugar pine can be impressively large. 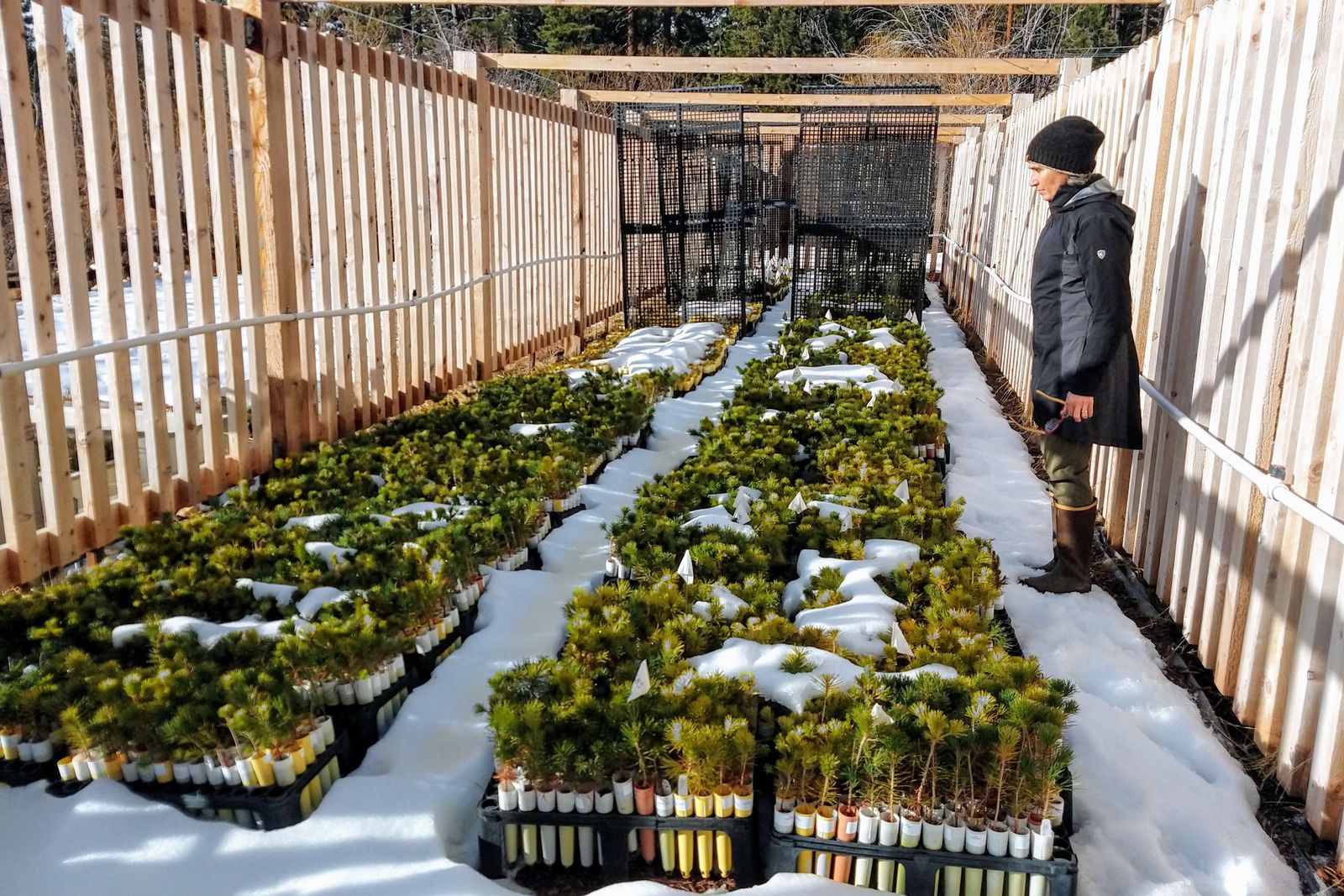 Seedlings at the University of California, Davis field station in Tahoe City 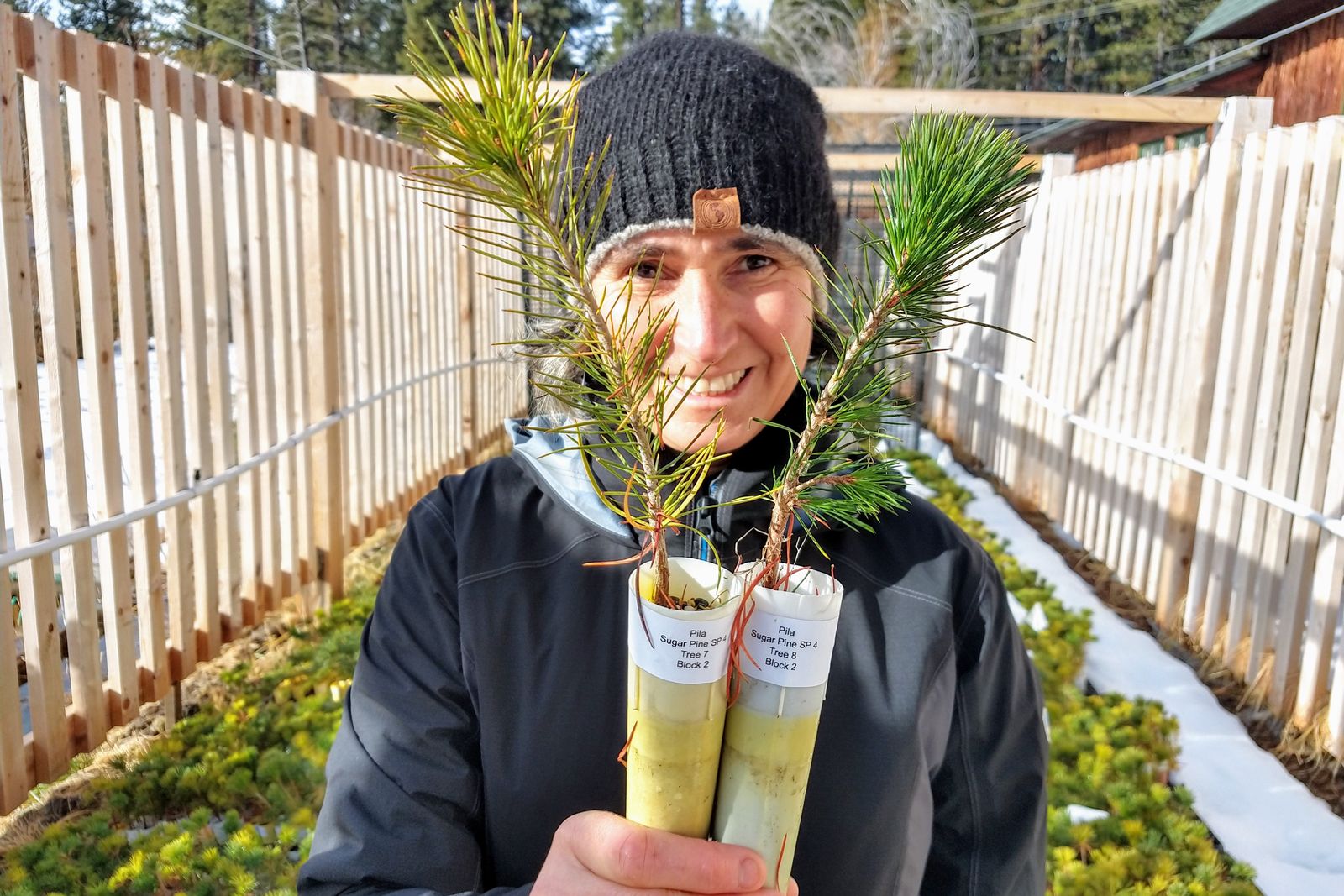 Patricia Maloney with sugar pine seedlings: Between 2012 and 2016, 130 million trees in California died as a result of the drought. Most are still standing in the forests. Maloney, a forest researcher at the University of California, Davis, now wants to plant a new generation of trees that are better equipped to survive water shortages.

A dead tree at Lake Tahoe: Maloney had noticed that dead, dried-up trees and verdant living trees are often located right next to each other, meaning that certain specimens are better suited to surviving a drought than others. These "survivor" trees are the sources of the seeds the forest researcher is planting in the Tahoe forests.

Seedlings: At a U.S. Forest Service nursury, seeds from 100 survivor trees have been used to grow 10,000 seedlings. Some are still stored at this University of California field station in Tahoe City. Others have been planted in nearby forests. 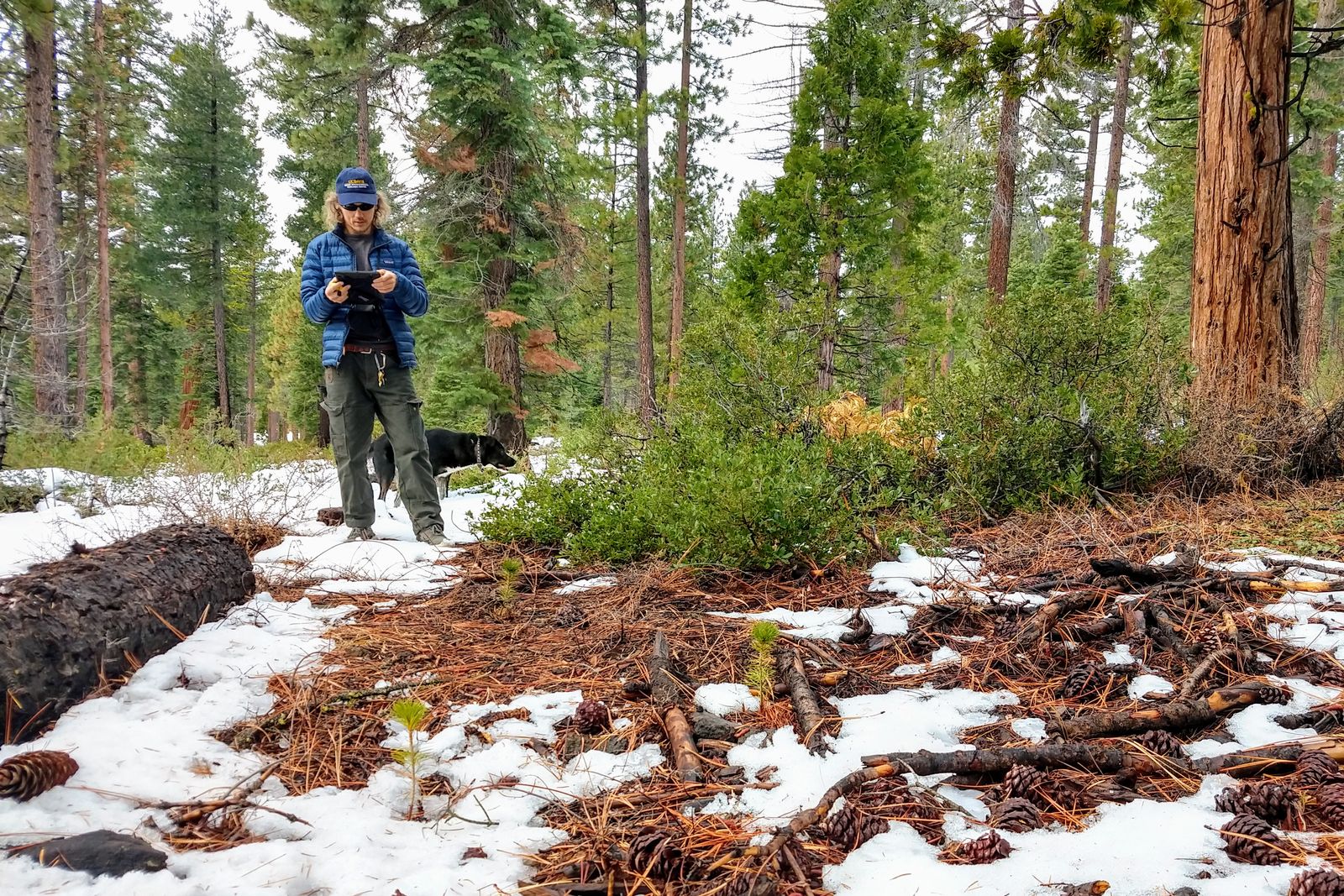 Fellow researcher Vanderpool on the hunt for young trees: The trees are always planted in groups of three in the hope that at least one will survive. Even at only short distances, the microclimatic conditions can differ considerably. 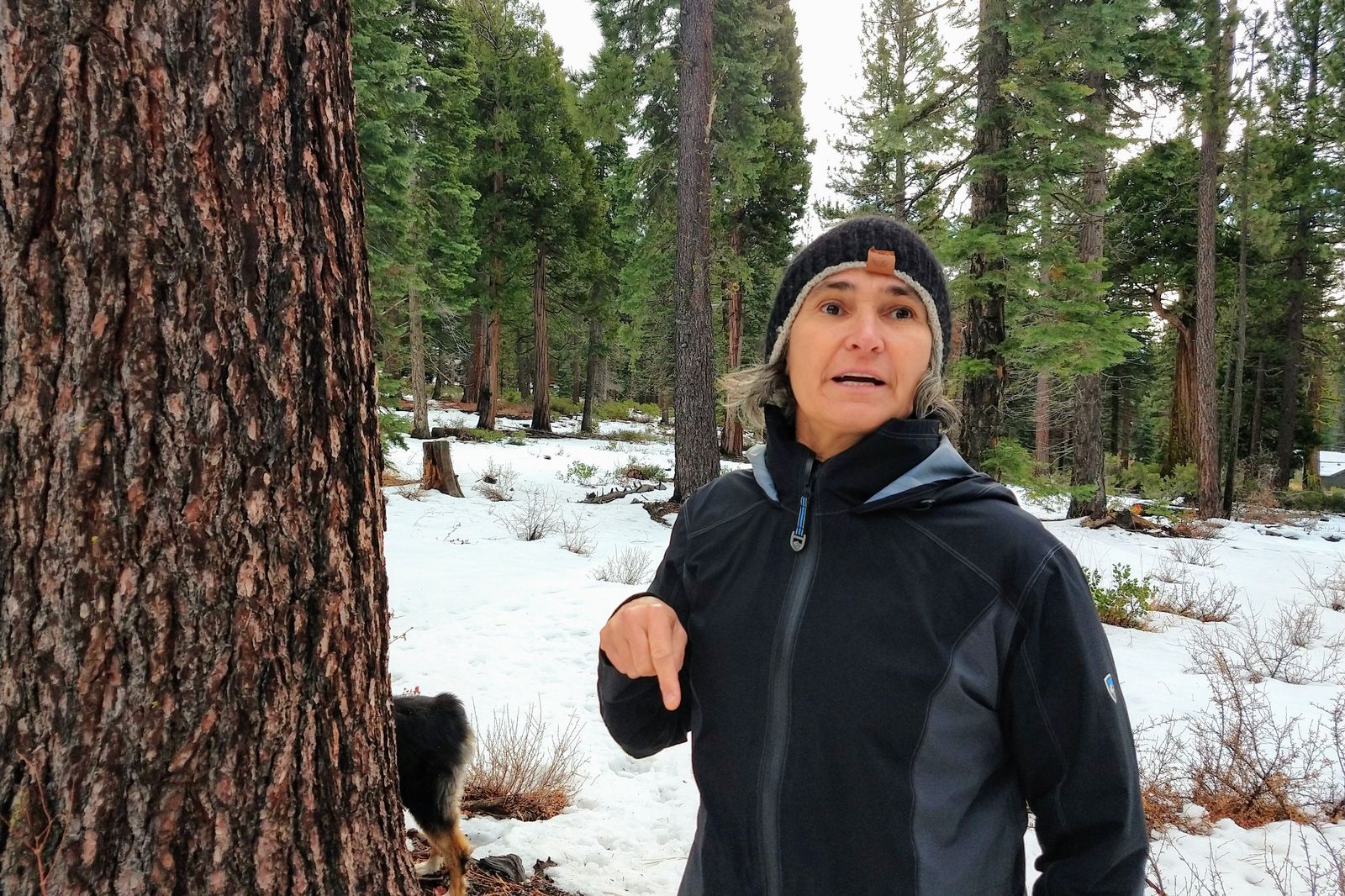 Maloney's project alone won't be enough to save California's forests. But her primary goal isn't that lofty. With her project, she mainly wants to see whether reforesting with more resilient species can work. 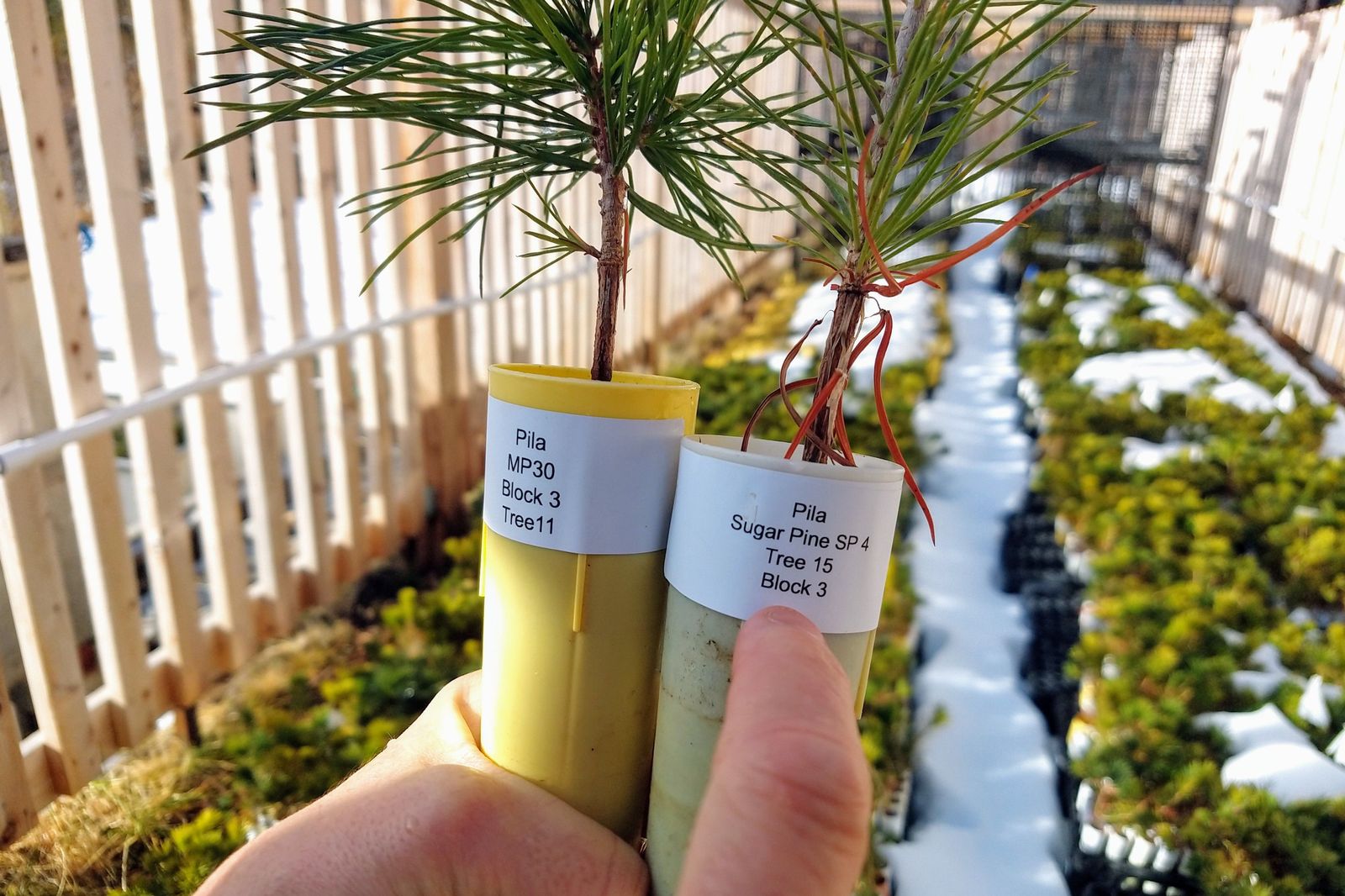 Even though some of the seedlings come from very robust parent trees, not all will survive in the wilderness. Researchers are aware of this and factor it into their planning. 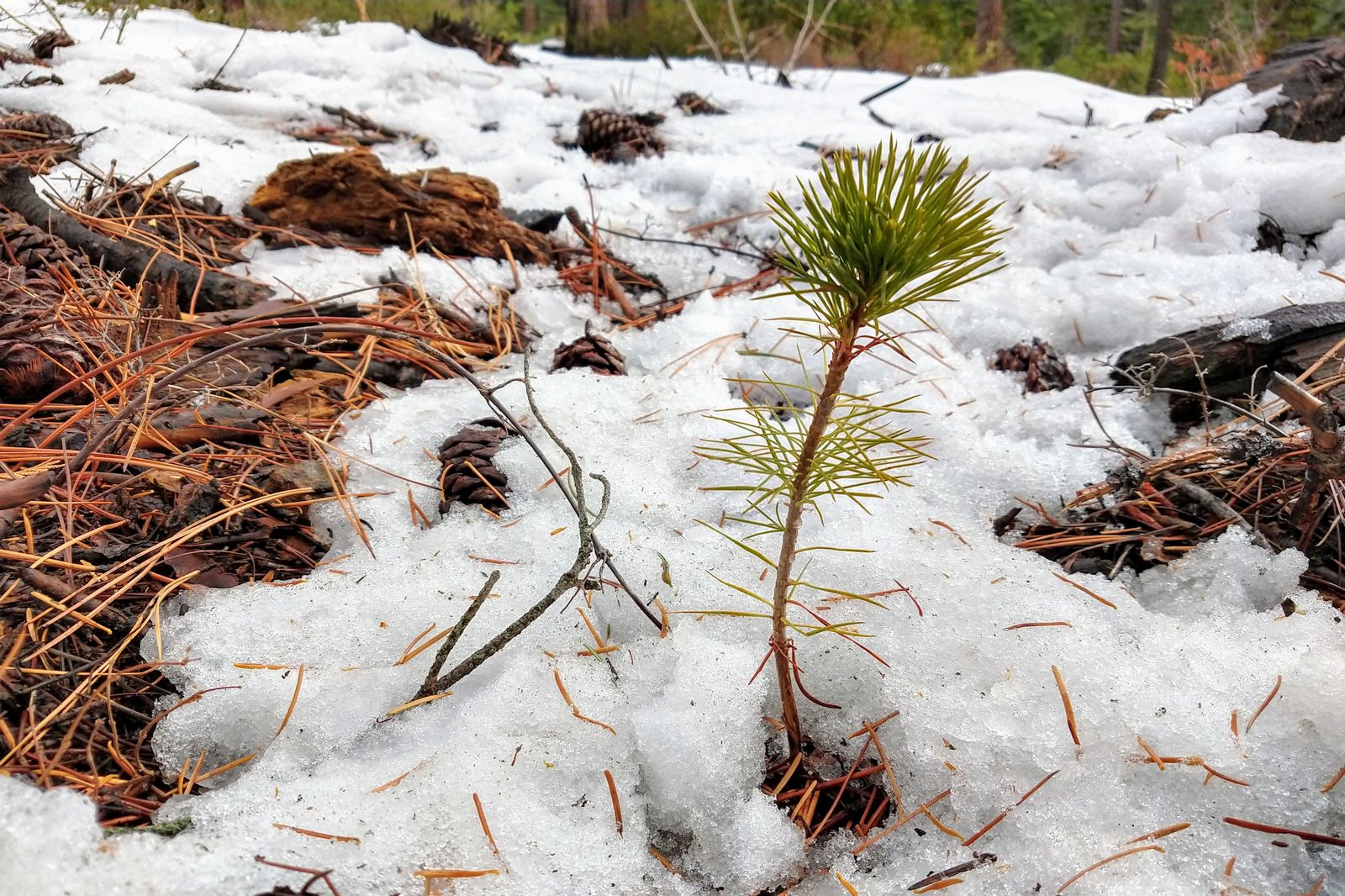 A planted sugar pine: One day, this tiny plant may grow to become a giant. Sugar pines are considered the largest of all pine species. Some specimen have reached heights of more than 80 meters. The tree's name is related to a substance it excretes called inositol, which is sweet to the taste.

If you don't continue giving water to sugar pine cones after picking them, they open up and release their seeds. In this dry state, they can grow up to 60 centimeters long and up to 25 centimeters wide.

Researcher Vanderpool: The team would like to spend at least three more years monitoring the trees' growth, but it is lacking the funds to do so.