It’s only hair, the dealers with the scissors say. But everyone knows that’s not true.

Take Prak Sohka, for example. The 42-year-old lives in the countryside of Cambodia, some 170 kilometers away from the capital city of Phnom Penh. She says her hair has won many beauty contests and that she cares for it with a mixture of coconut oil and a special blossom.

Prak has a photo in the apartment that shows her at the age of 18 with long black hair. Shortly afterward, she says, a woman approached her and offered the equivalent of 40 euros for Prak’s hair. It seemed like a fortune to her at the time. Then it took another five minutes until the hair was gone and only a few strands were left on Prak’s head.

Hair As a Source of Income

In India and China, the market for human hair has long been a billion-dollar business. To meet the great demand, other Asian countries have also started getting in on the trade. Cambodia is one of those, a country in which, according to World Bank statistics, 4.5 million people live below the poverty line, meaning they have to get by on less than $2 a day.

"Be more beautiful for a better life."

An advertisement in a shop selling real hair in Phnom Penh

In Cambodia, especially in the countryside, hair is seen as a renewable raw material they can sell to pay for their children's’ school fees, food and the mortgage on their home.

Photojournalists Louise Pluyaud and Benjamin Filarski spent time reporting in Cambodia in February, just before the coronavirus struck. They met with women in villages who had already sold their hair two or three times. Women familiar with the shame and the rumor that cutting off your hair can create bad luck.

They also met with the women who scout the large markets of Phnom Penh for shocks of human hair, for which they pay up to 500 euros, because of the boost it gives their self-confidence. They also hope the hair extensions will make them more successful in their careers.

The photojournalists also met with the merchants who sell the hair and wear T-shirts with words like "Never stop growing” on them and signs with slogans like "Be more beautiful for a better life” hanging in their shop windows. But is this empowerment or humiliation?

Hair isn’t just hair, as Pluyaud and Filarski found out. It's also money. And the hair trade also has to do with dignity. What does it mean when women buy other womens’ hair in order to live up to a beauty ideal, with the result being that the other woman, the one who doesn’t have money, is no longer able to live up to that ideal herself? Is it a sign of the humiliation of women by Cambodian society because it leads to women more or less mutilating each other? Or is it empowerment given that women earn money that makes them more independent from their husbands and families?

Pluyaud says that the women who sell their hair aren’t victims - that they know what they’re doing. "They use what they have to create a better future for themselves and their children,” he says. It allows many of them to accomplish things they would like to do. But he says the situation is different for the women buying the hair. They often feel pressure to meet certain standards that society imposes on women in Cambodia.

The following photo gallery provides stories of the women who sell their hair and further information about the major hair markets in Phnom Penh: 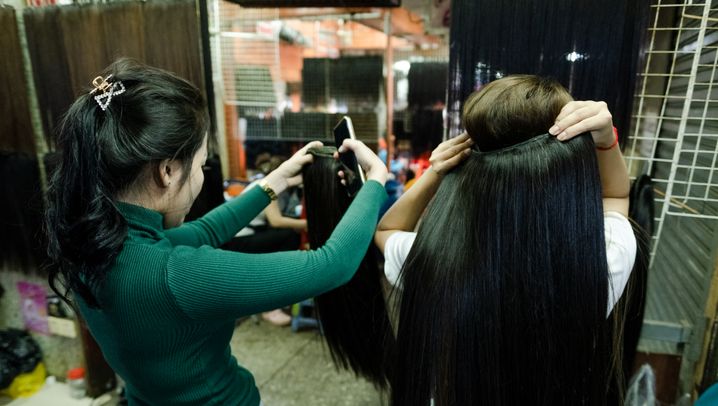 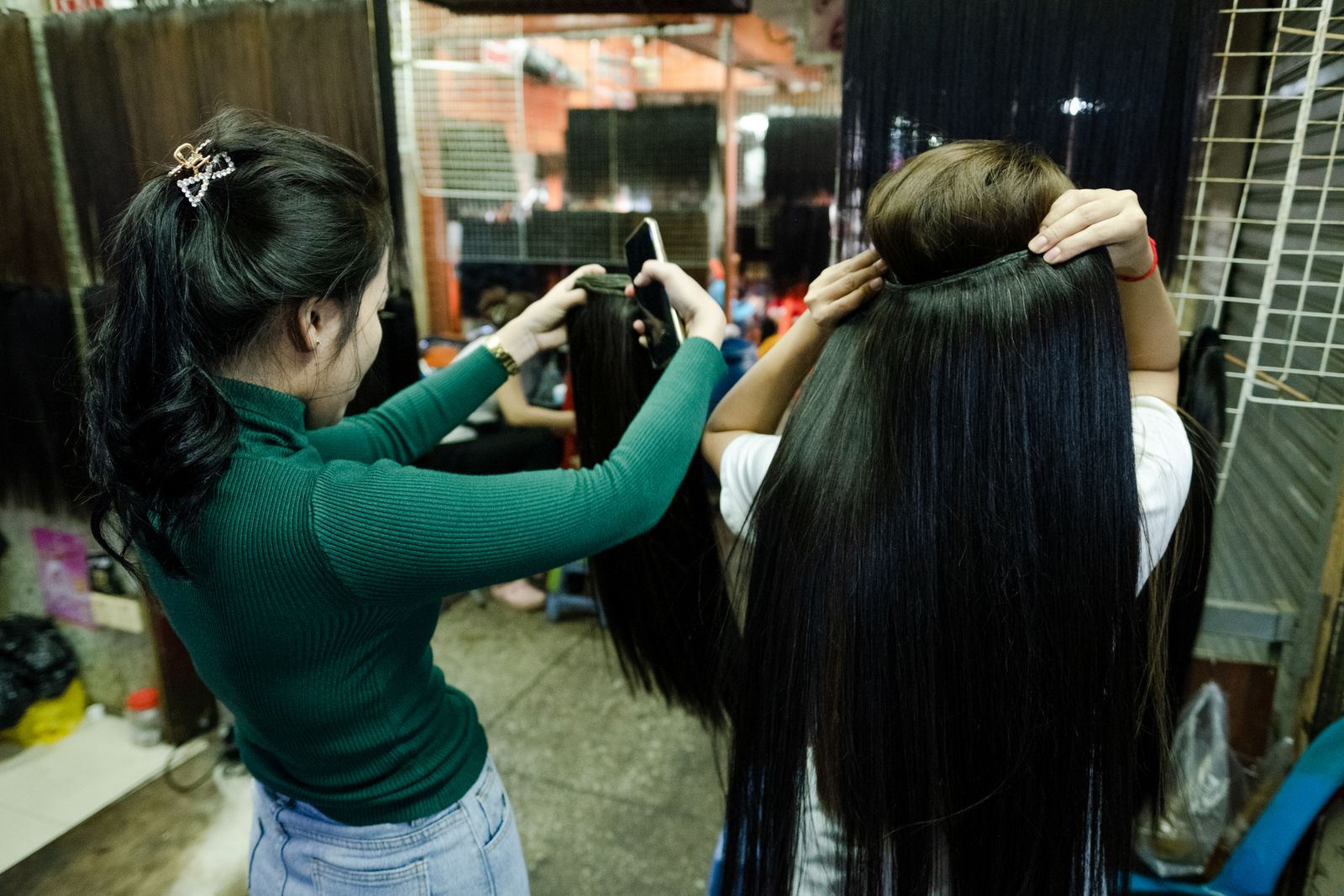 Two women in Phnom Penh check out extensions made of real human hair: The hair often comes from poor women in rural areas.

These women come once a month to the Orussey Market, a hair market in the Cambodian capital city Phnom Penh. Many middle class women buy human hair extensions, spending hundreds of euros on them. Photojournalists Louise Pluyaud and Benjamin Filarski went on a reporting trip to Cambodia in February. They wanted to find out  why the demand for human hair is so high in the southeastern Asian country. And they wanted to know who the women are who sell their hair. 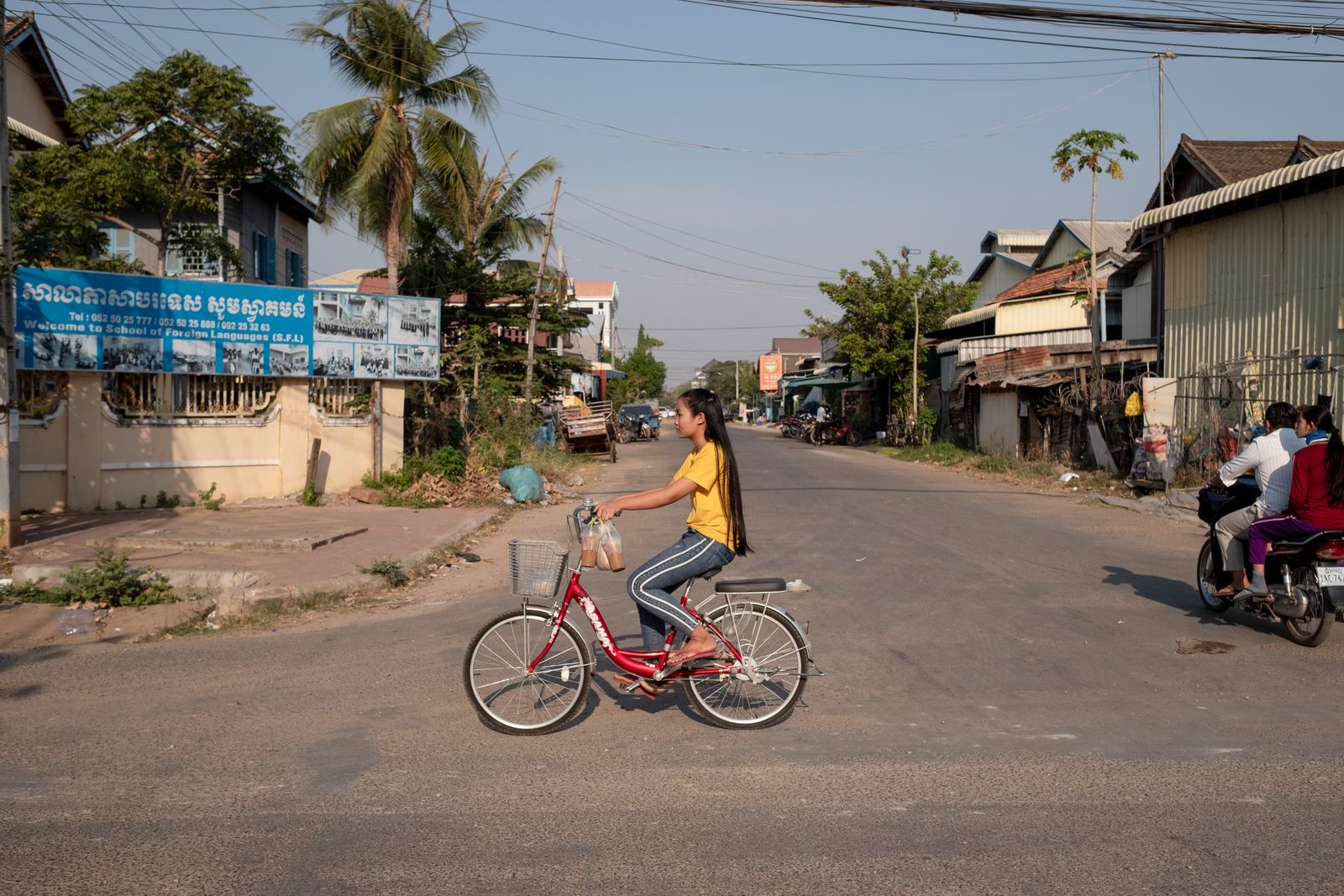 The hair often comes from women from poorer regions of the country. Hair sellers visit the villages to scout women with long black hair. They offer the equivalent of between 20 and 30 euros for the hair. Many women in rural areas accept the offer because prospects for finding jobs there are bad. Photographers Filarski and Pluyaud say that some regret selling their hair afterward. 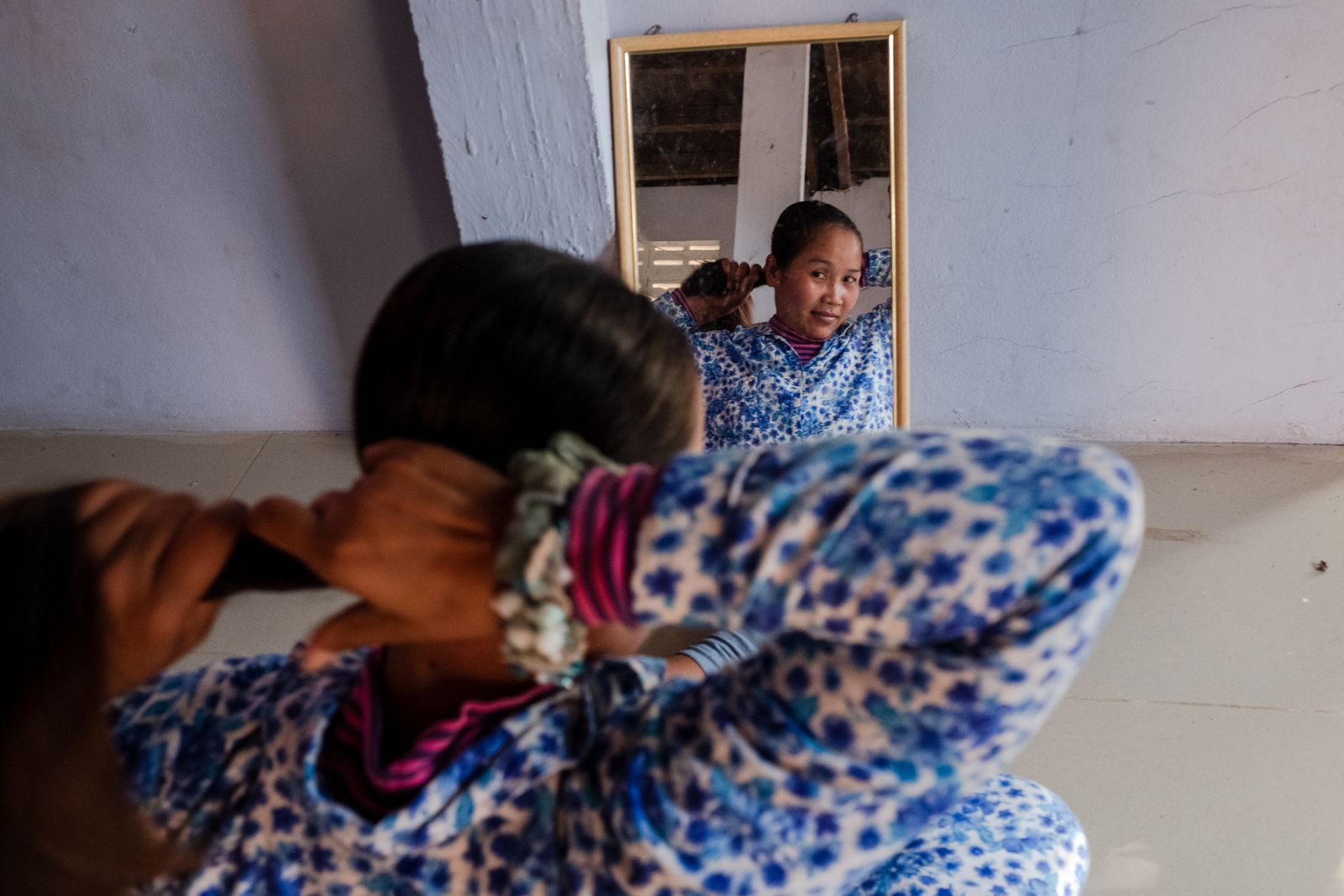 Chhut Ravey, 31, comes from a village in the Pursat region. She lives with her mother, husband and three children under one roof.  She sold her hair for the first time when she was 18 and received 20 euros. "I had to feed myself somehow,” she says. She is soon planning to sell her hair again. Ravey describes the step as a "sacrifice.” 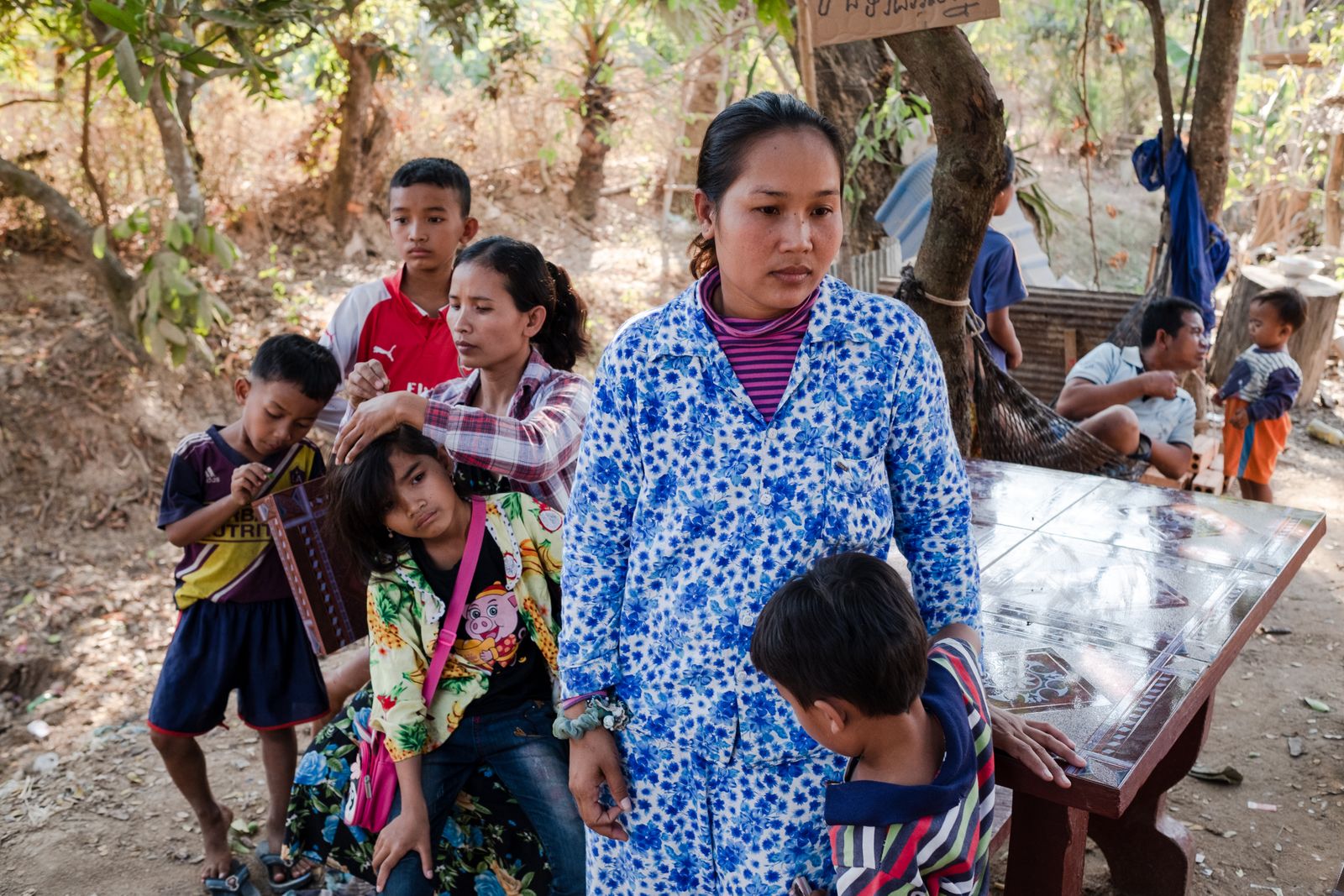 Chhut says that she was ashamed of her short hair. All it took was one look for everyone in the village to see what she had done. And you can’t hide short hair. "I have been referred to as 'the woman with the chicken tail.'” Her husband said that selling your hair is like selling your life. 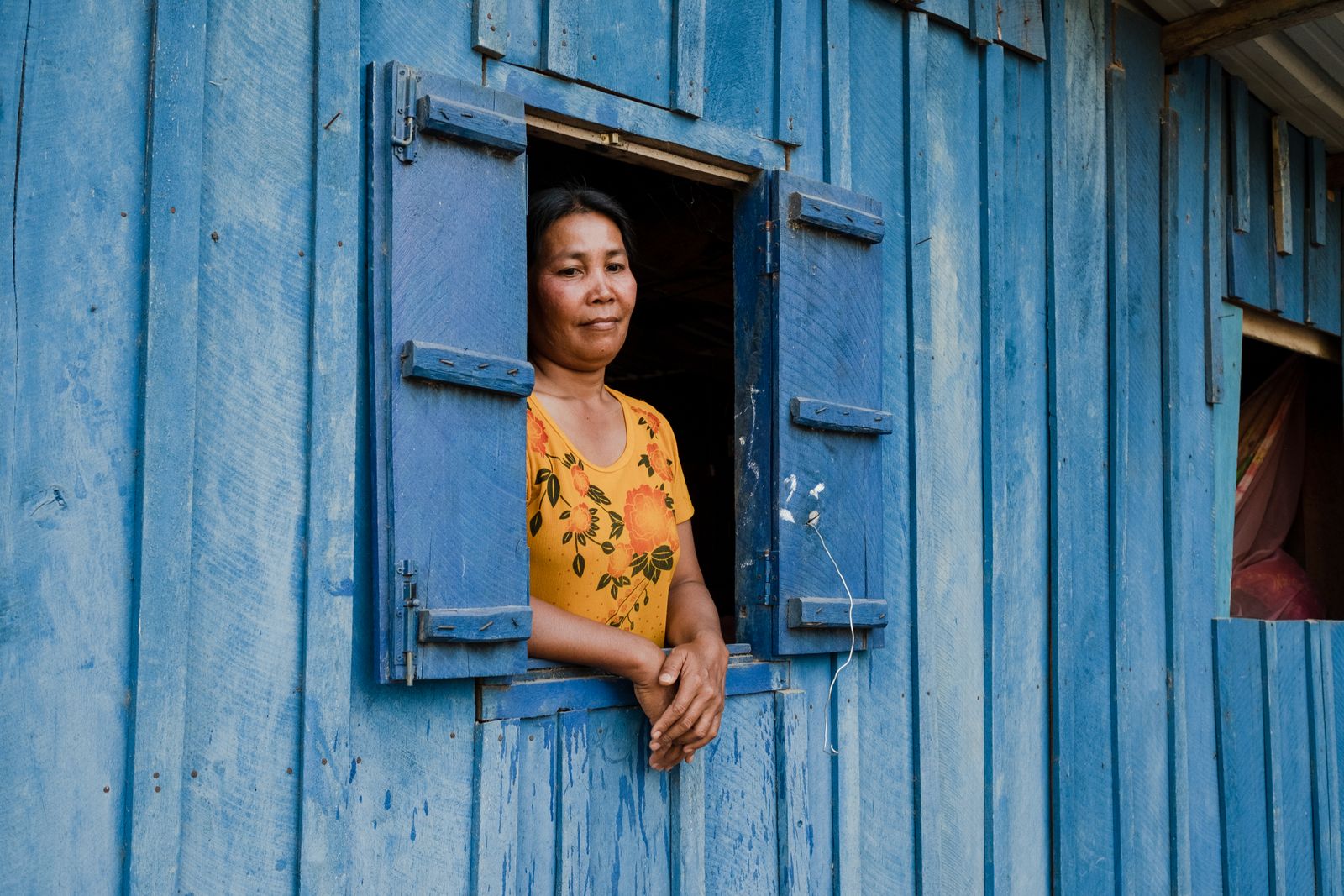 Prak Sokha, 42, is a single mother. She has sold her hair four times. She says she uses the money she earns to pay off the loan for her house, as well as school fees for her son. 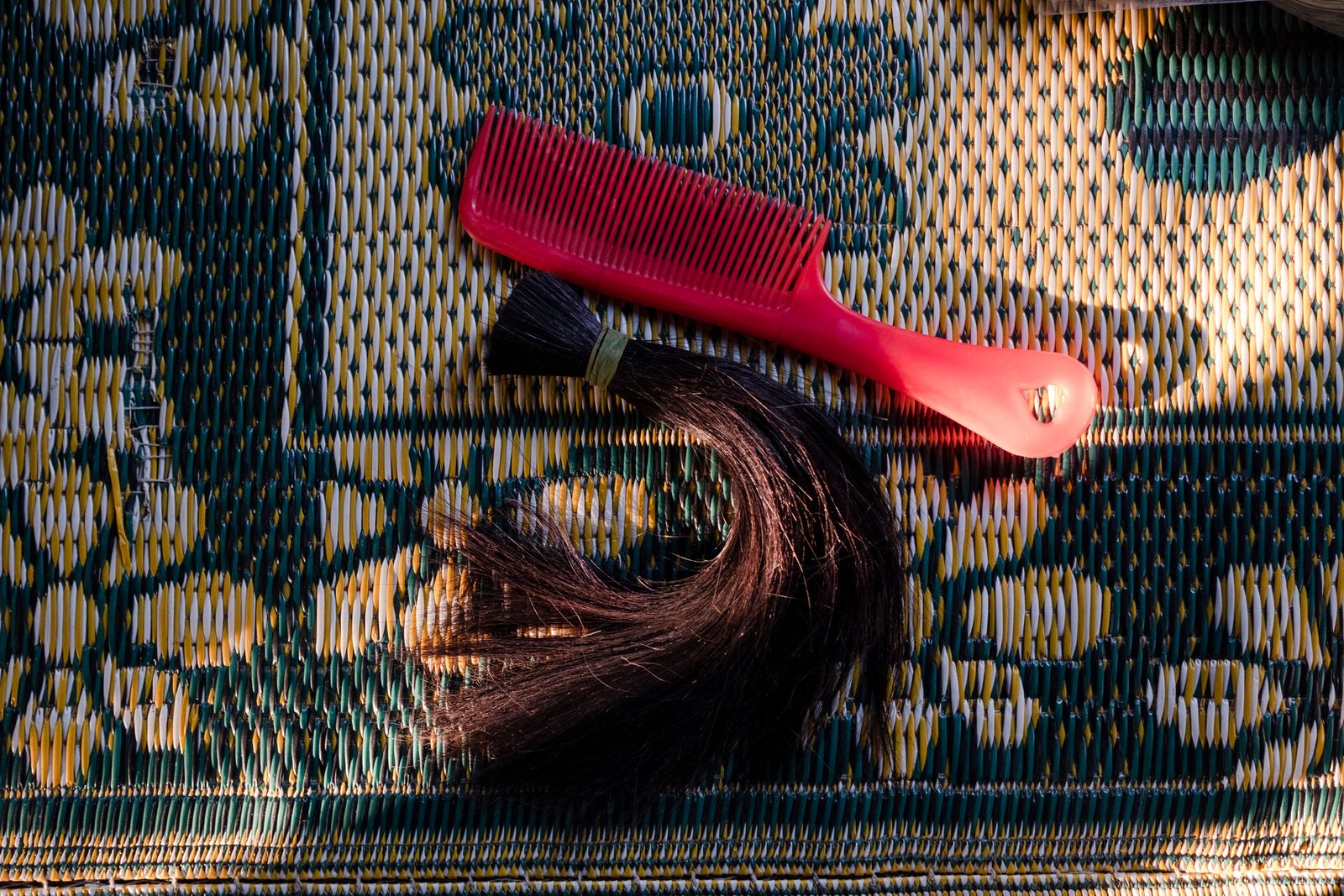 Sokha showed the photographer a shock of hair that she wants to sell soon. She says she's familiar with the rumors that cutting off hair can result in bad luck for a woman. But she doesn’t believe it. "I believe,” she says, "that Cambodia is developing and becoming a modern country.”  And that's something she wants to be a part of. 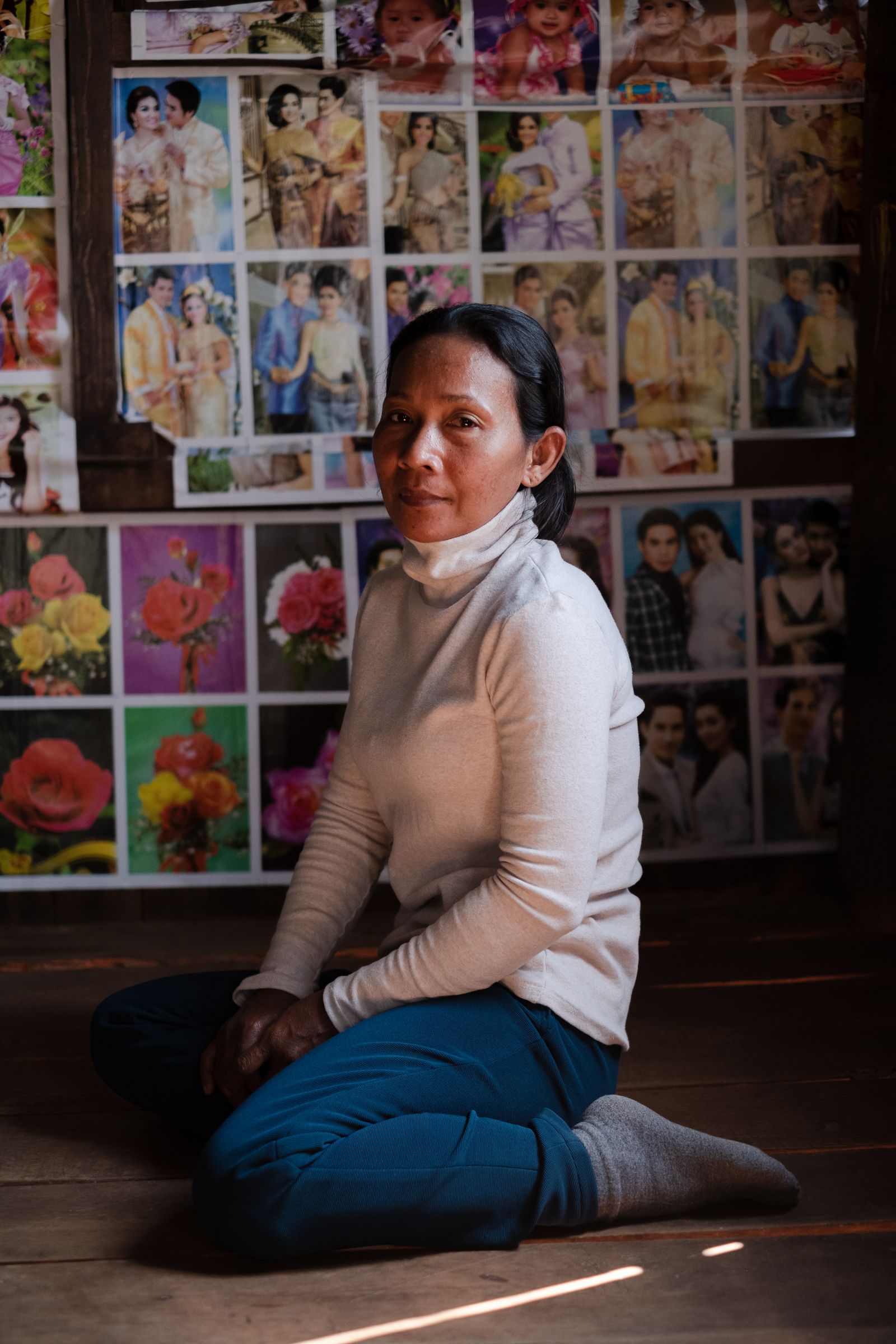 Seourng Heng, 43, also a single mother from the countryside, has two daughters aged eight and 14 and works for a laundry company. She cut off all her hair for the first time when she was 15 and received 18 euros. A few weeks ago, a couple came to their door wanting to buy her daughter's hair, but Seourng Heng refused. 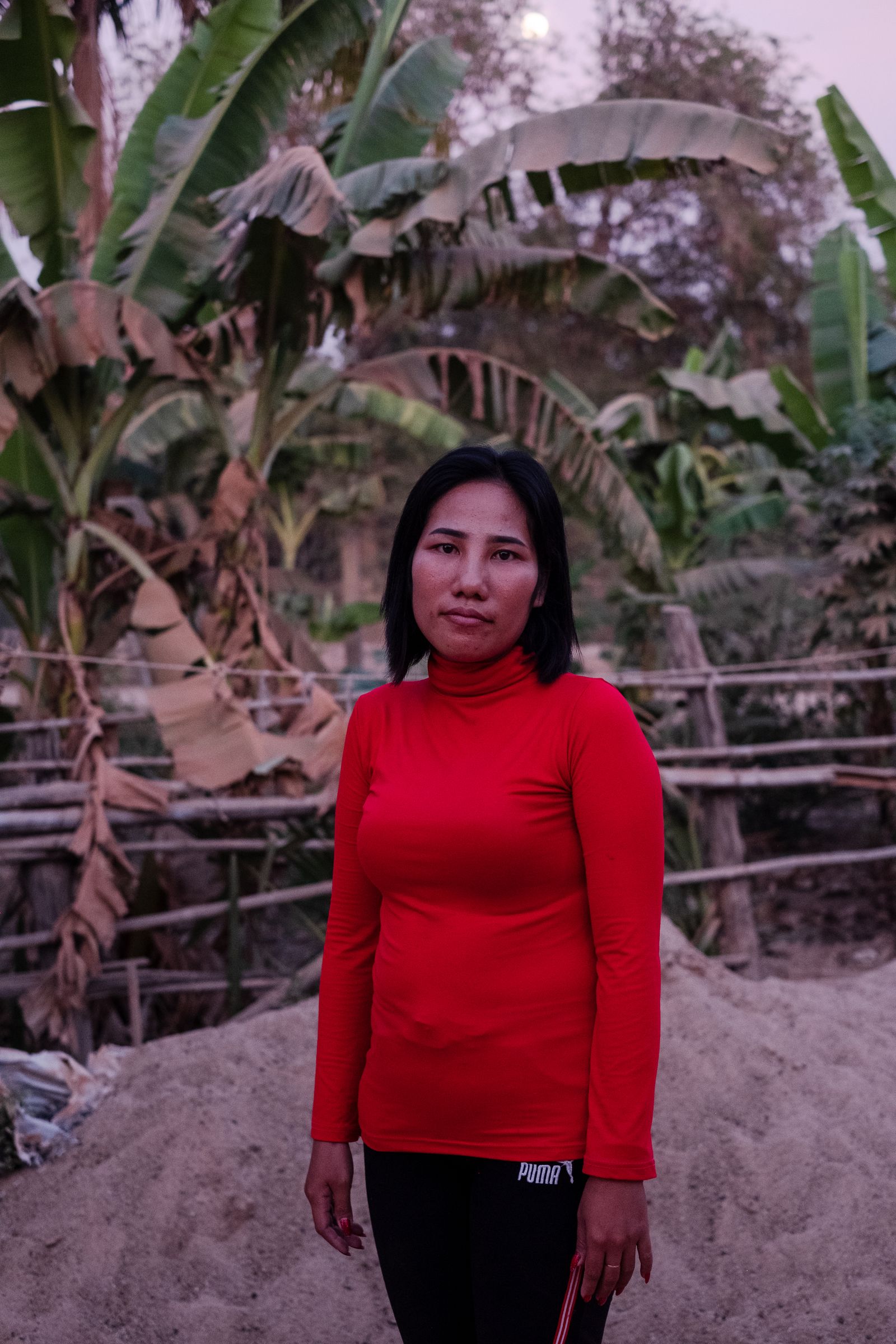 Srey Pov, 29, has two children. Last month, she sold her hair for the first time for the equivalent of 20 euros. She says she had to quit school at 16 because her mother was ill. Today, she works as a make-up artist. Photojournalists Filarski and Pluyaud say that the hair business also can allow women a measure of independence. 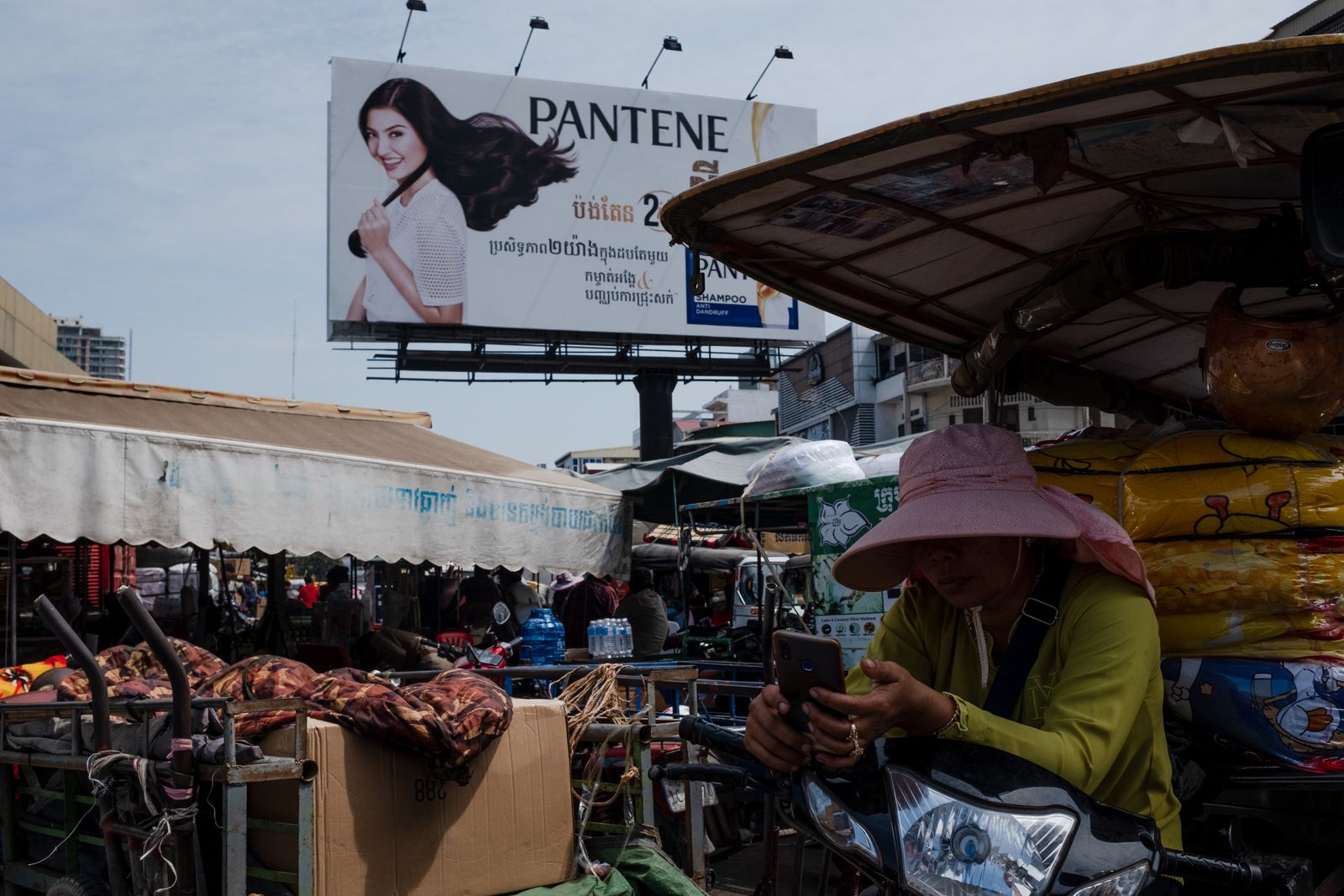 The Orussey Market in Phnom Penh is a large market for hair and hair products. Right at the entrance there are mannequins with long black hair that are used to advertise shampoo. Human hair extensions are available here starting at the equivalent of 100 euros. The primary customers are middle-class women. 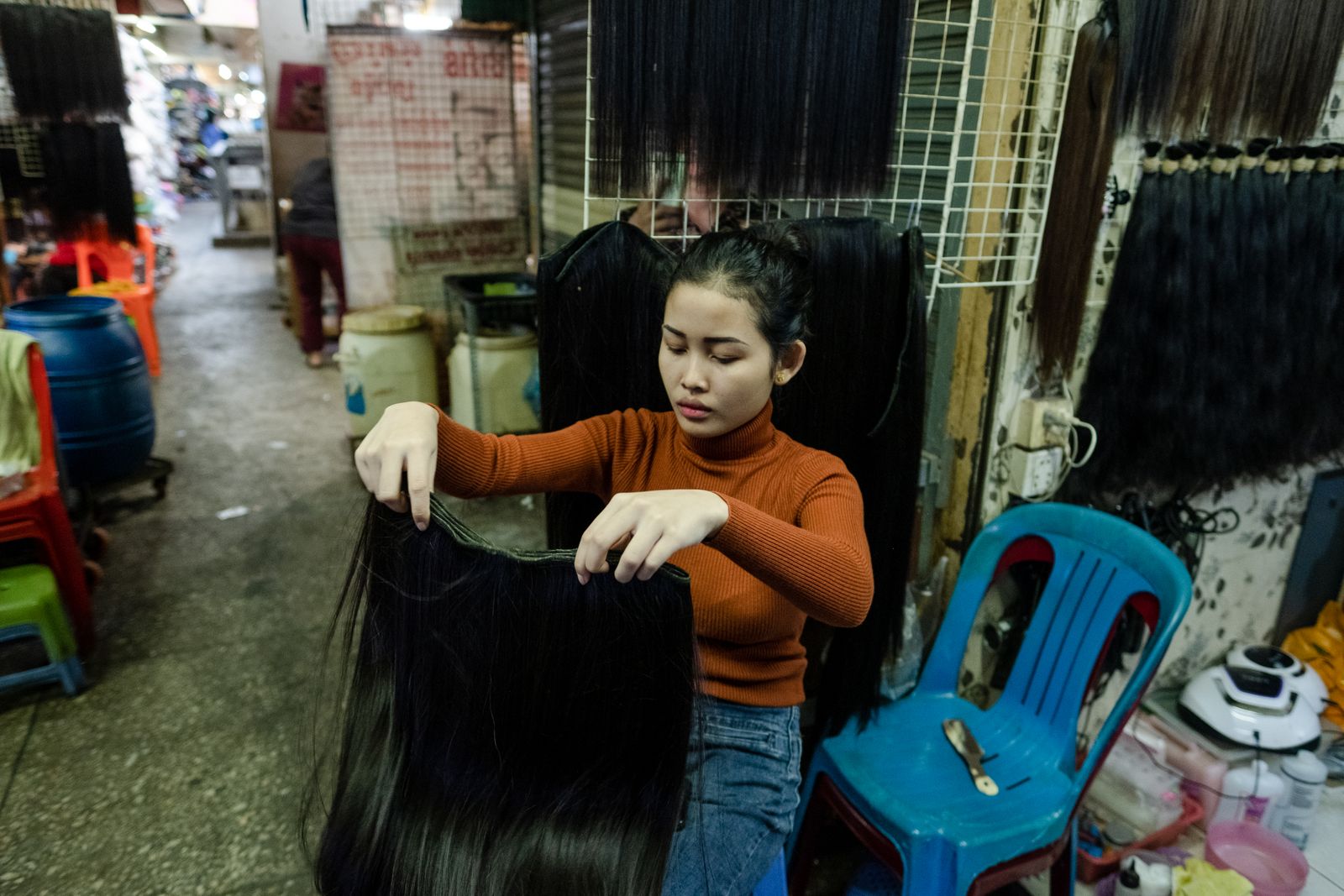 This young woman comes to the Orussey Market once a month to buy hair extensions. She says long hair is essential for success at her job. It is an argument the photojournalists heard frequently when reporting this story. Some women would also buy hair for special parties, while hostesses and waitresses at bars and restaurants are frequent customers. 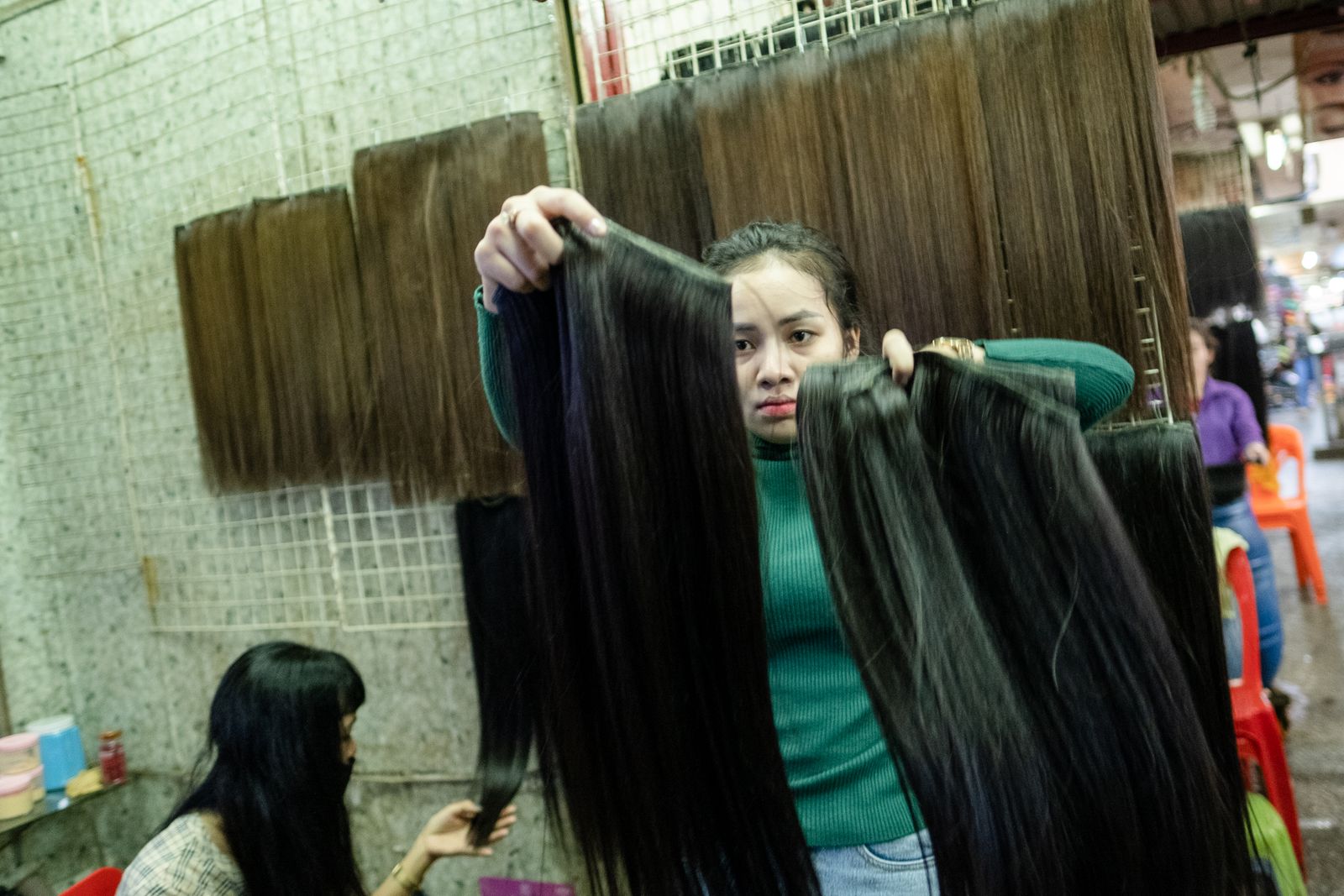 Sales in human hair are booming in Asia, to the point that demand has long since exceeded the supply. And that has contributed to a number of scandals. Some traders have been caught selling hair that they cut off dead women, or took from women violently. This has led to an increase in the value of straight hair whose origins can be traced precisely. And women in the rural areas can charge higher prices than they did a few years ago. 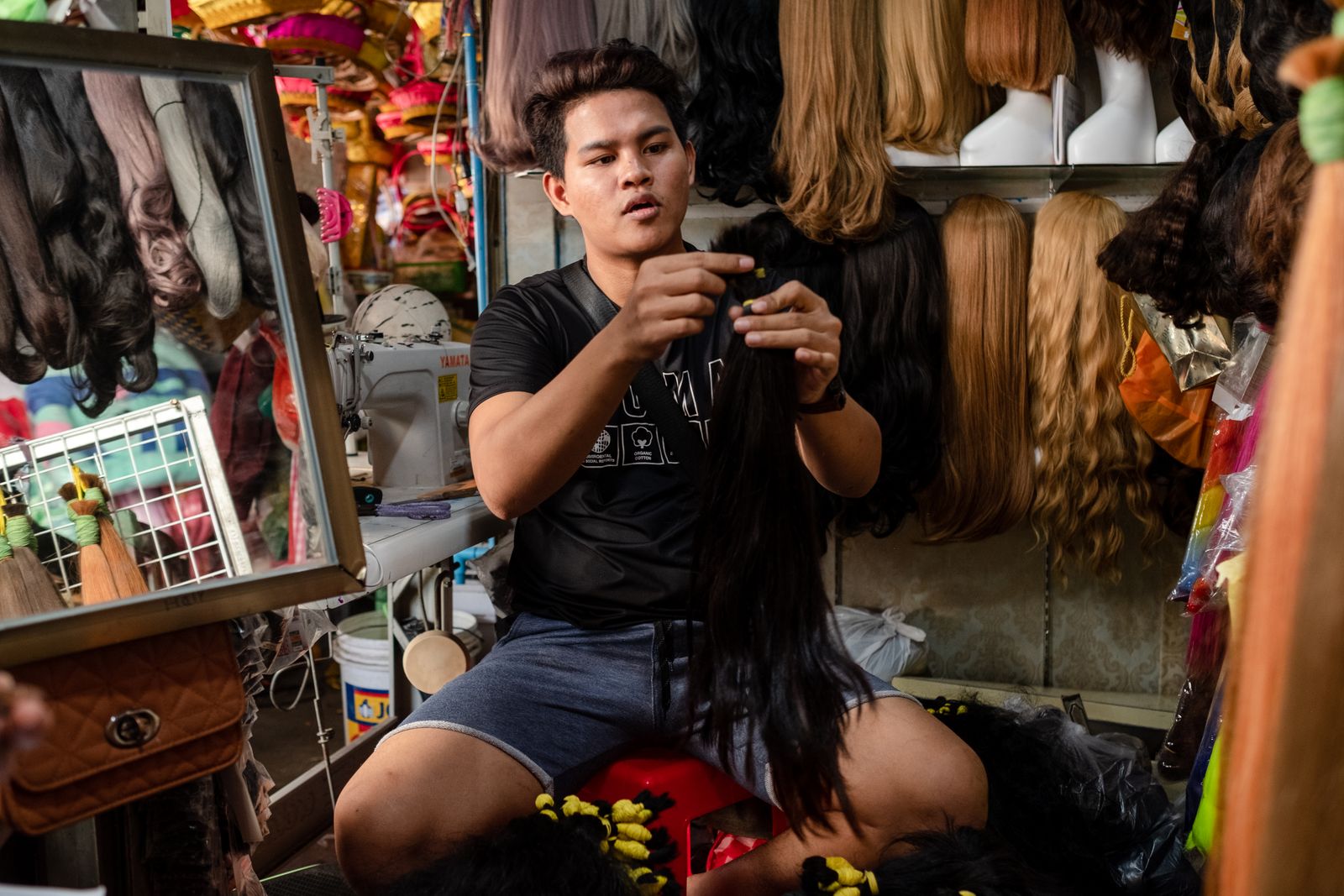 Kim Sros, 30, has been selling hair at Orussey Market for the past 10 years. He says he took the business over from his mother. At times, he says, he doesn’t know exactly how old the women are whose hair he cuts or whether they are still minors. He has customers in Turkey, Vietnam, the U.S. and Europe. 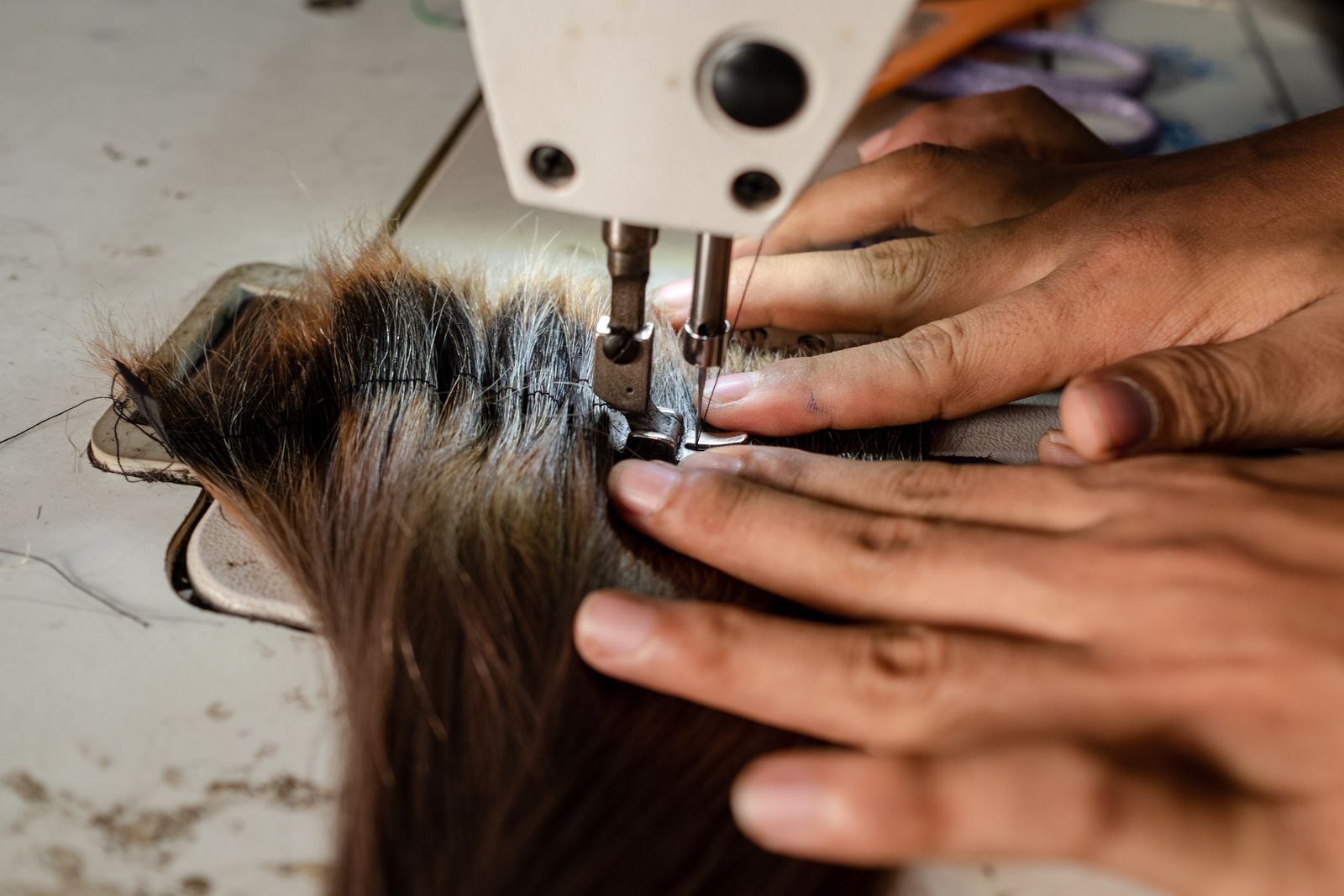 Hair-seller Kim Sros connects a strand of hair using a sewing machine. He says the hair business is "a win-win situation.” The poorer women get a fair amount of money and the other women more beautiful hair. "And I also have to make a living from something,” he says. 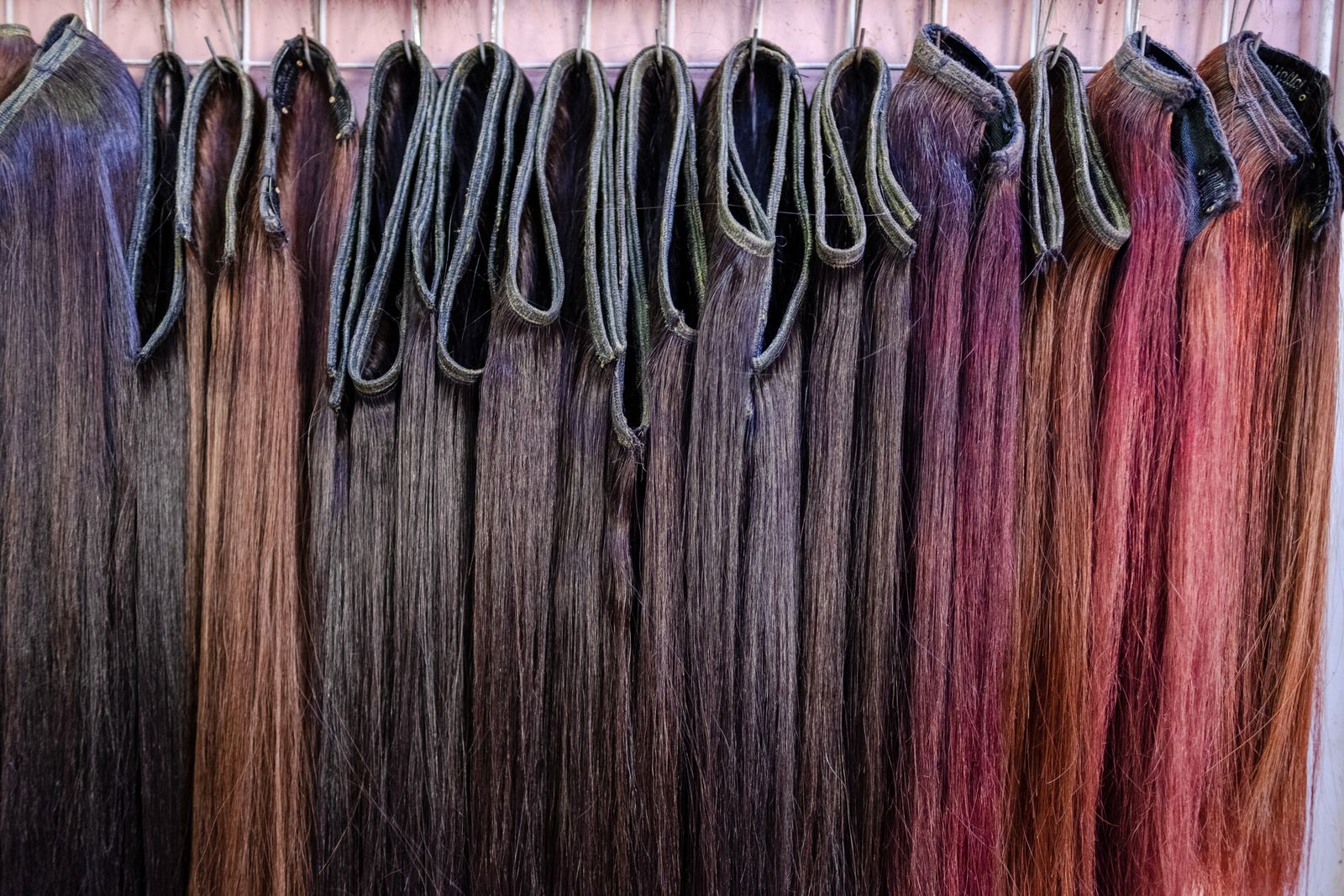 India and China are the global market leaders in human hair extensions. According to a study by Research and Markets, the global hair extension business could be worth up to $5 billion by 2024. The price of long female hair continues to rise. 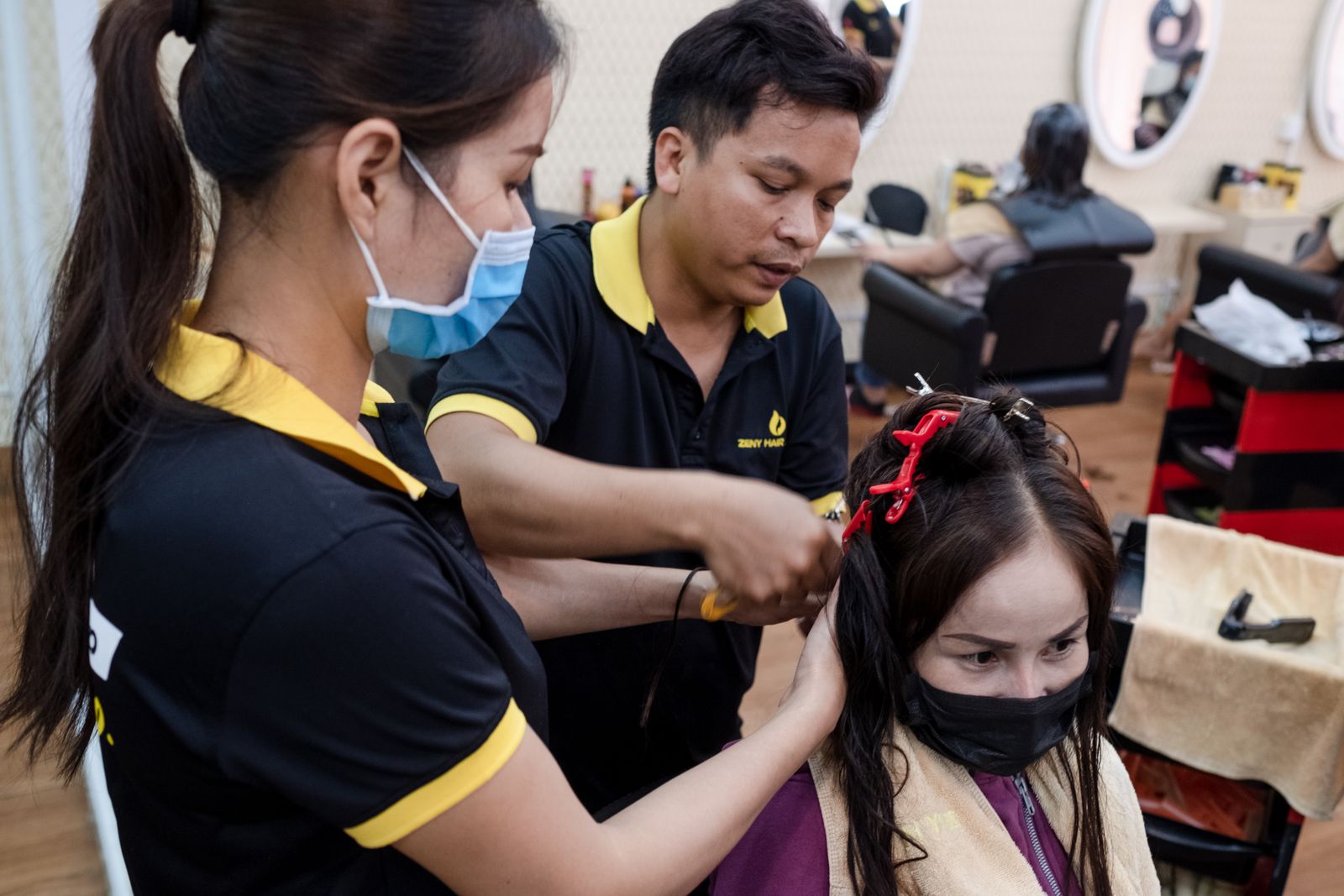 In a hairdressing salon in Phnom Penh, a customer is getting extensions done.  Photographers Filarski and Pluyaud say that employees in the salon wear T-shirts with the slogan "Never stop growing.” 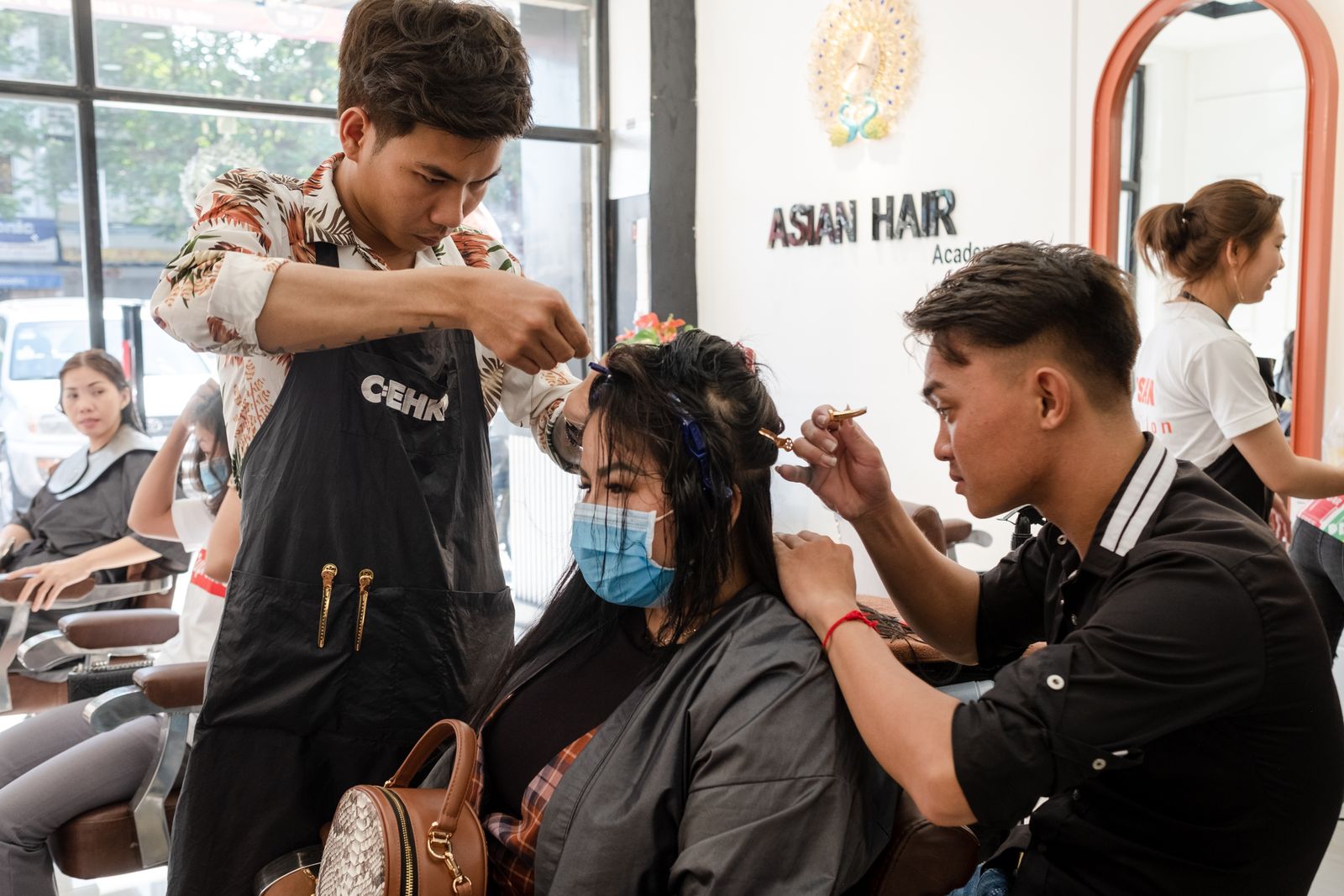 In this hairdressing salon, a customer has human hair braided in. Some sellers advertise with slogans like: "Be more beautiful for a better life.” Beauty and success are closely linked in the country, the photographers say. That’s also one explanation for the boom in hair products. 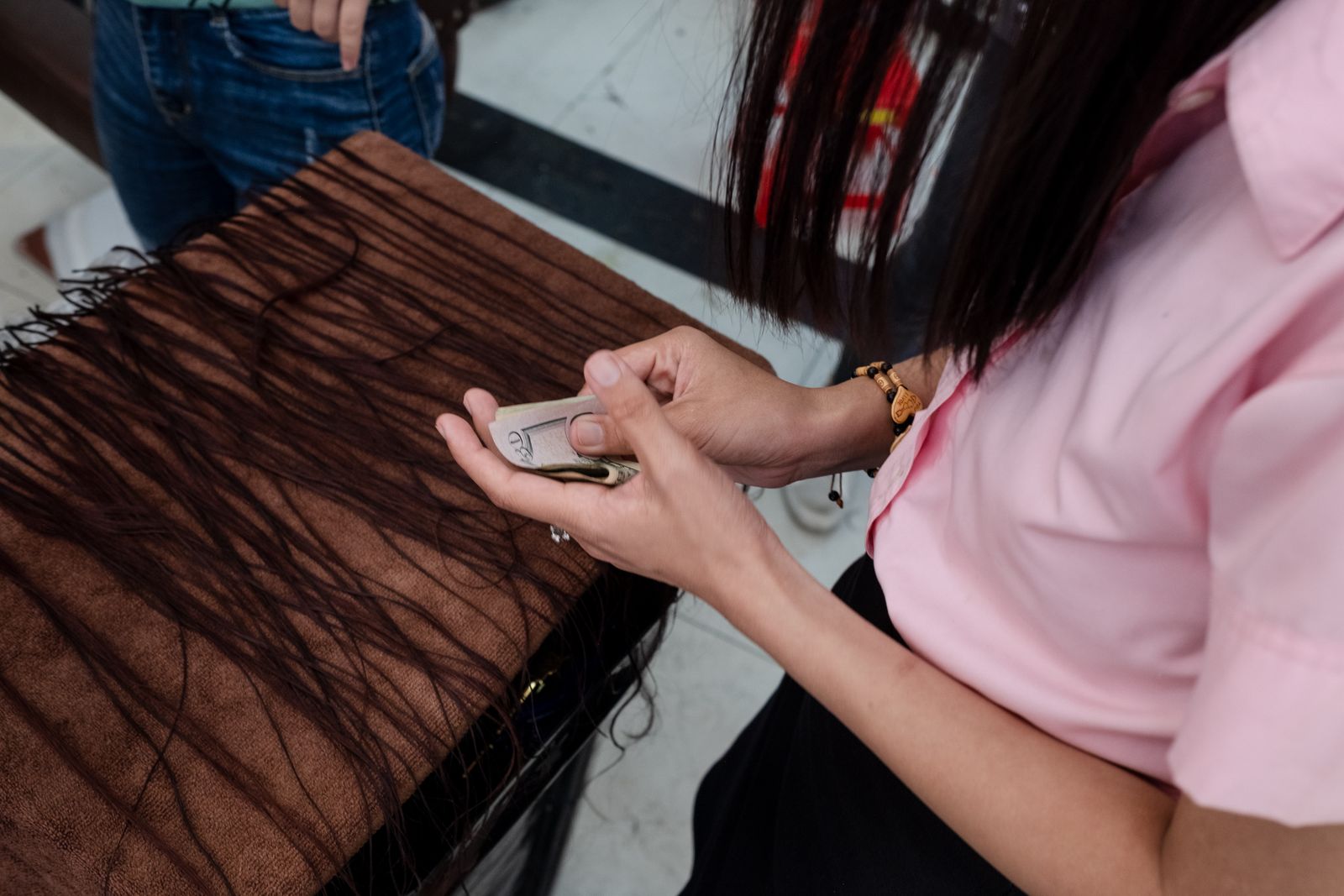 But what does the demand for human hair say about the role of women in society?  That’s what Filarski and Pluyaud sought to find out in the course of their reporting. 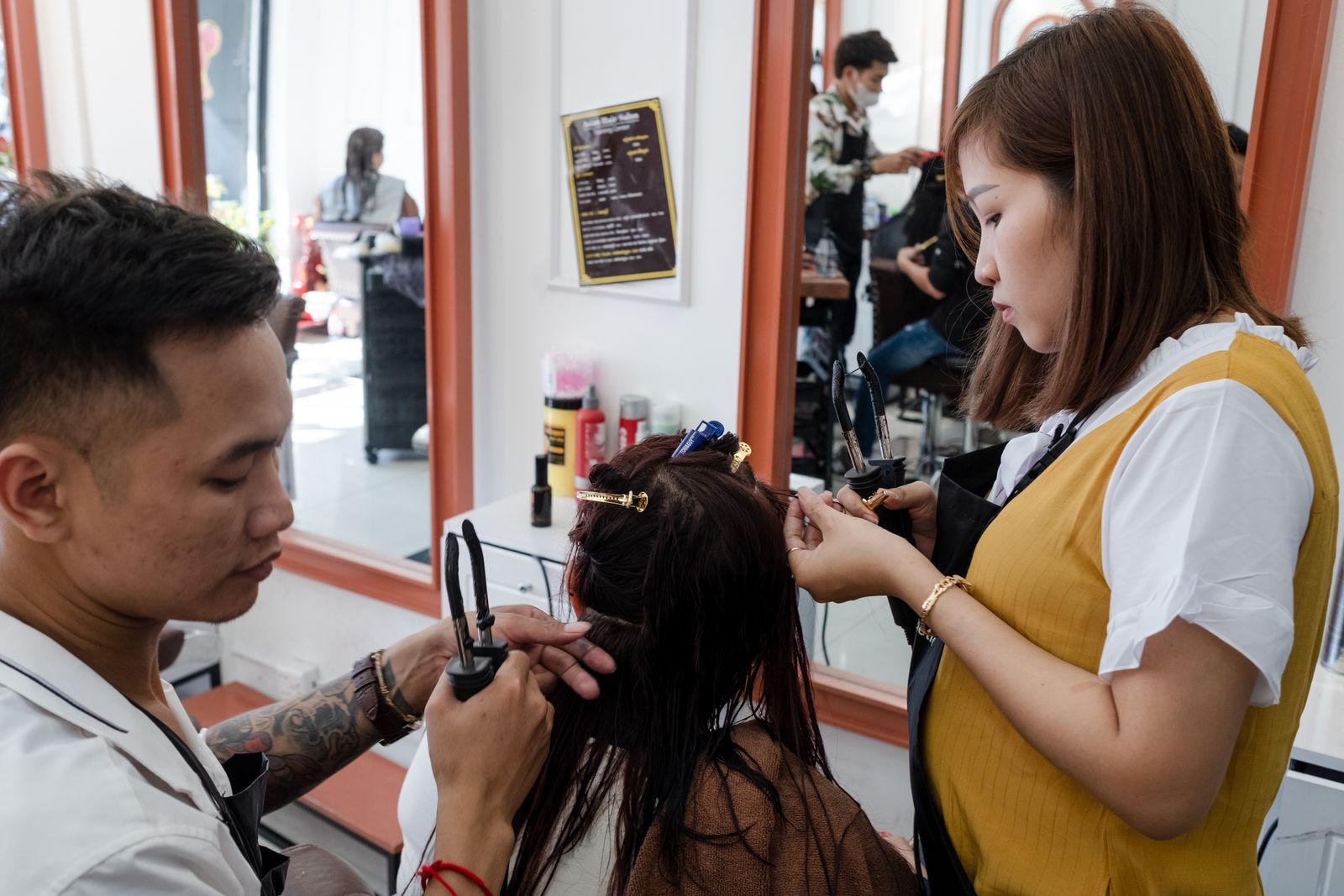 "The women aren’t victims,” says Pluyaud. "They know what they’re doing. If a woman sells her hair, she’s doing it in order to ensure a better future for herself and her children.” She says many are more independent of their husbands and families. But she says the situation is different for the women buying the hair. They often feel pressure to meet certain standards that society imposes on women in Cambodia. 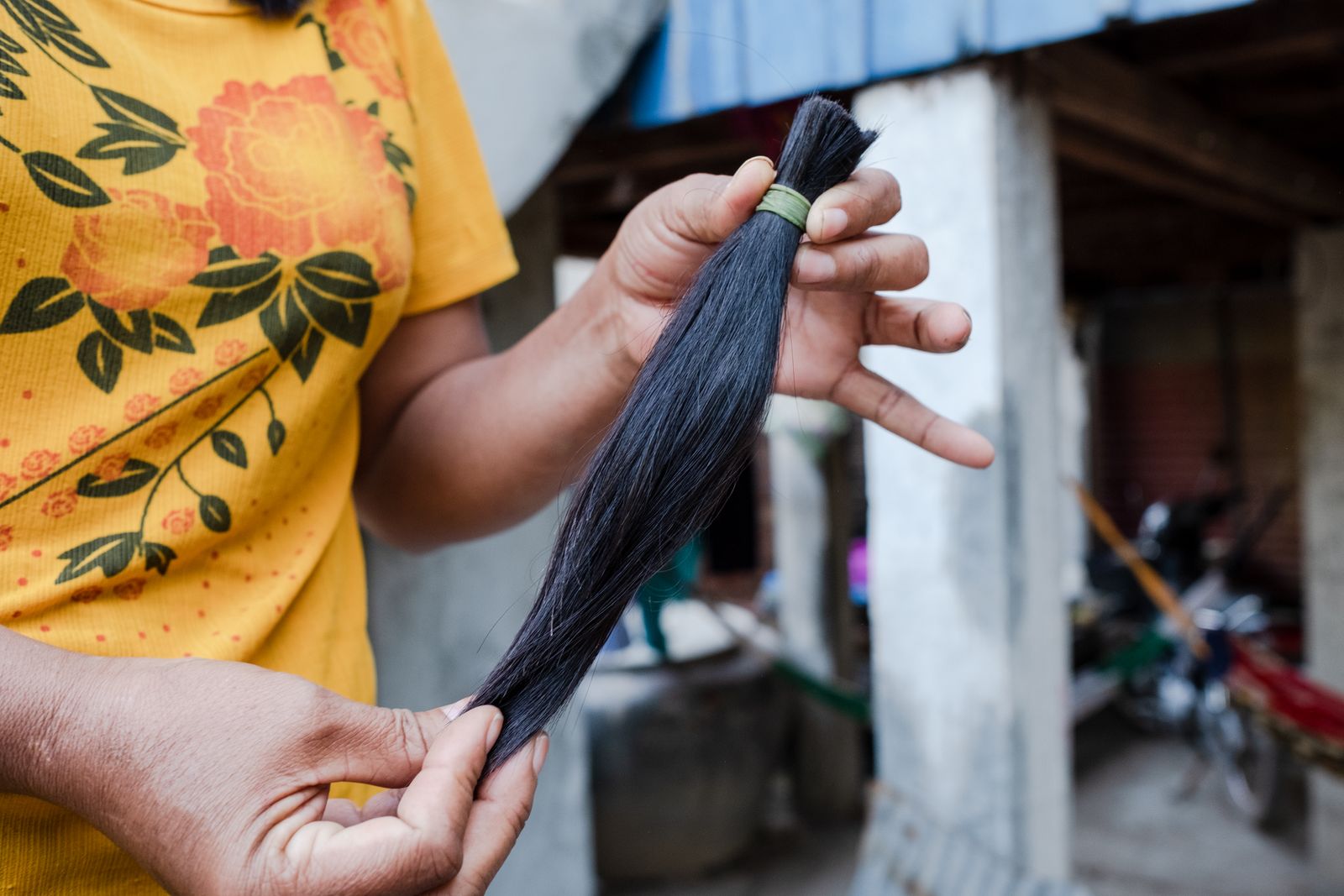 Prak Sokha will use the money she gets for her shocks of hair to pay off her home loan -- and invest some of it for her son’s future. Her son, who is 14 years old, is hoping to study IT one day. "I’m sad my mother has to cut off her hair for me,” he told the photographers. "Because it reminds me that we’re poor.”