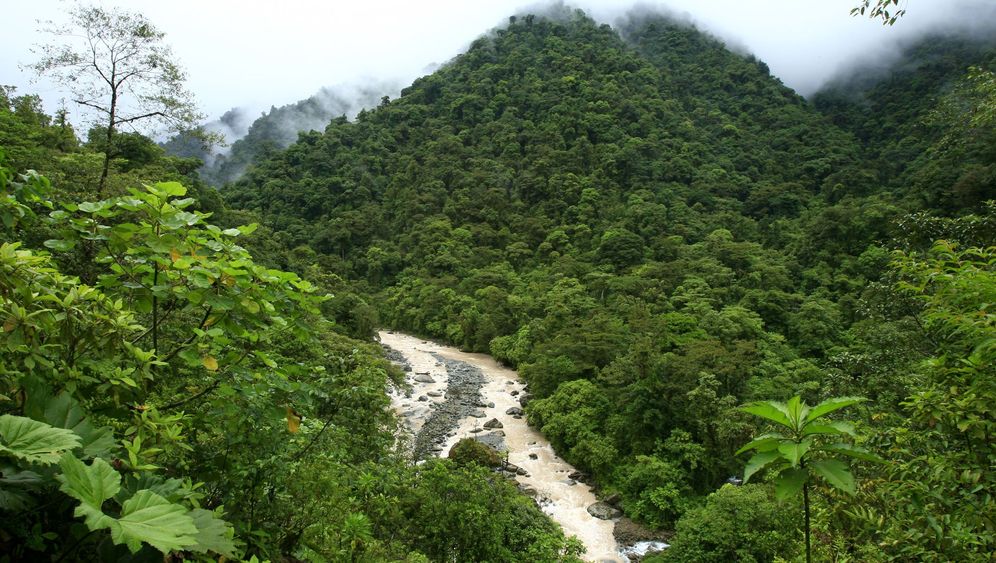 Photo Gallery: The Fight to Save the World's Rainforests

If you want to save the world, there's no point starting in Paradise. At least that's what environmental protection groups said when it was announced that the world climate summit would be held on the tropical shores of Cancun.

But looks can be deceiving. The Mexican beach resort is not really such a bad place to stage a tribunal for the world's greatest environmental sinner: Mankind. A local environmental protection group, "Cielo, Tierra y Mar," made that point at last week's opening of the mega-conference. In terms of protecting the climate, "Cancun is the best example of what not to do," a spokesman for the group said.

This becomes all too clear the moment you venture beyond the gleaming, high-rise hotels where the climate negotiators are meeting. Mangrove swamps used to stretch for many kilometers along the coast of the lagoon. Today there are just 11,392 hectares left, and some 500 hectares more disappear every year.

Ecologists say Cancun is a prime example of how thoughtlessly we are exploiting our planet. That's why they think it's an excellent place to talk about the destruction of the rainforests. "It will be the dominant theme in Cancun," predicts Tim Tennigkeit, who will be representing the Freiburg-based forestry consultancy firm Unique at the conference.

REDD (Reducing Emissions from Deforestation and Degradation) is the acronym of an ambitious United Nations program that wants to save our planet's remaining rainforests and thus prevent the release of an additional 4.4 gigatons of carbon dioxide per year. "If the world can't agree on CO2 reduction targets, at least the UN can use REDD to prove that it can still get things done," Tennigkeit adds.

The first funds are ready for distribution to protect forests around the globe, and already the prospect has galvanized the foot soldiers of the newly established climate protection industry that trades in emission rights, administers funds and certifies so-called "green" projects. The UN's chief environmental protection officer, Achim Steiner of Germany, is cautiously optimistic. "REDD can be a part of the solution both for climate change and protecting the environment," he says.

Others warn of the dangers of acting too hastily. "No matter how well-intended they may be, quick solutions can be dangerous," warns climate economist Reimund Schwarze of the Climate Service Center in Hamburg. He says that although the REDD program will inject billions of dollars into developing nations, the money may have exactly the opposite effect to the one desired. In other words, it could increase deforestation rather than halt it.

The idea behind REDD is as simple as it is convincing: The global destruction of forests produces more than a sixth of the total man-made carbon dioxide emissions. If, instead of cutting trees down, the forests were preserved and reforested, huge amounts of the greenhouse gas could be absorbed from the atmosphere. In this way, every tree saved helps slow global warming.

Unfortunately, there is little economic incentive to protect the world's jungles. A rainforest in Brazil, a coastal forest in Madagascar or a forest in the Russian taiga aren't worth anything when they are merely growing. By contrast, they generate plenty of revenues as wood and farmland.

REDD wants to reverse this logic by making the protection of nature a profitable undertaking. Industrialized nations pay into a fund that is then used to pay developing countries to leave their forests untouched.

Oil-rich Norway wants to donate a billion dollars to the fund. Far greater sums are to become available in the future when companies will be able to pay to protect forests and receive emission rights in return. These emissions trading rights will also be available to countries. So if a country wants to meet its CO2 reduction targets, it can simply buy REDD forests abroad.

Studies carried out on behalf of the UN Biodiversity Secretariat predict the concept could have "previously unknown positive effects" -- provided it is implemented properly. Many countries, including Brazil, Nepal and the Democratic Republic of the Congo, are already testing ways to make money from forestry protection.

Fears of Corruption and Mismanagement

But environmental groups are divided over the issue. They say REDD might create an extremely practical system, but could just as easily become a monster in which huge sums of money actually promote corruption, mismanagement and destruction. "Everything depends on whether the delegates in Cancun can find the right wording," says climate economist Schwarze.

Chris Lang has witnessed the destruction of the rainforest first hand. "We need effective protection mechanisms," says Lang, an Englishman who has lived in the Indonesian capital, Jakarta, for many years. Lang founded and runs an initiative called REDD Monitor, which keeps a close eye on the forest-protection program.

That's partly because even though international agreement has not yet been reached appropriate structures have already formed. And these structures don't bode well. "The key aspect is what the forest to be protected should look like," Lang says.

Many different definitions are currently doing the rounds at the UN. According to one of these definitions, a forest can be classified as a carbon dioxide sink if just a tenth of the wooded area is situated beneath a canopy or if the trees have the potential to grow to a height of at least two meters. "That's what a collection of tree trunks or a wood plantation looks like," Lang quips.

This type of classification could have devastating consequences. Lang fears that logging firms could secure themselves concessions for rundown sections of forests in order to set up plantations while at the same time receiving subsidies from the REDD program.

This bizarre scenario is not that outrageous. The Japanese paper company Oji plans to set up a eucalyptus monoculture on an 80,000 hectare site in Laos. These plants would be hacked down, shredded and sent to paper mills soon after they came out of the ground. "On its website the company brags about wanting to apply for REDD money," Lang points out. He says another paper giant, the Indonesian company Asia Pulp and Paper, is using similar practices on its land. Such activity is of virtually no environmental benefit. Any carbon dioxide captured by eucalyptus trees is released again the moment the waste paper is incinerated.

Lang suspects that the lumber industry will use a simple trick to get its hands on subsidies by capitalizing on a procedure employed in some forest areas by small-scale farmers who burn down smaller areas of the jungle, plant crops, and then move on after a few years. "That's a relatively harmless use of the forest," Lang explains.

However, companies could redefine woodland used in this way, classify them as inferior areas, clear and replant them with plantation trees, and be paid for supposedly helping to fight climate change.

Indonesia provides a good example of why Lang's concerns are justified. Before international inspectors had a chance to take stock of the existing woodland, the Indonesian forestry ministry declared 41 million hectares of rainforest "special areas" for use by companies.

Unfortunately, even if the abuse of REDD subsidies were prevented, the positive effect could still disappear. One phenomenon currently giving economists a headache is termed "carbon leakage." If an area of woodland is protected, logging companies and major landowners simply use the land next door. Here too there is a worrying precedent.

For the past 14 years, a US environmental protection organization called the Nature Conservancy has been managing an 832,000 hectare area of protected land in Bolivia as part of the so-called Noel Kempff Climate Action Project. The money for this was donated by, among others, oil giant BP and American Electric Power, the largest operator of coal-fired power plants in the US. The money is well spent for both companies because they can use the project to trumpet their "green" credentials.

Nevertheless, deforestation goes on unabated across Bolivia. The only difference is that the chainsaws are now downing trees elsewhere. The amount of carbon emissions saved by the model rainforest project have therefore had to be corrected downwards not once, but twice. Whereas the volume was initially estimated at seven million metric tons, the talk now is of just 840,000 metric tonnes. "Greenwashing" is what skeptics call it.

REDD planners hope they can plug such leaks by getting as many countries involved in the project as possible. Yet the pressure on the world's last unspoiled forests is increasing, partly as a result of our constantly growing hunger for meat, but also due to measures that were supposed to protect the environment: biofuels made from sugarcane, corn, palm oil and jatropha, for example.

The indigenous peoples of the rainforests could easily fall prey to a "REDD rush". Last year an Australian company tried to sell emissions certificates to Indians in Papua New Guinea. They were told that the company would not touch their forest if they bought REDD pollution rights.

When the case came to light, the Australian media coined a new term for such dubious businessmen: "Carbon cowboys."