It's a rainy winter morning at the heavily guarded Belmarsh high-security prison in London. A hearing on the possible extradition of WikiLeaks founder Julian Assange is underway in the courtroom inside. His supporters are outside, with signs, a megaphone, dreadlocks, flyers, candles -- the usual.

Six demonstrators, though, stand out. They are wearing masks depicting the grinning face of Guy Fawkes, the man who plotted to blow up the House of Lords in 1605. The mask was popularized by the 2006 anarchist thriller "V for Vendetta."

"We are Anonymous," says one of the masked demonstrators. "We don't forget, and we don't forgive," says another. "We are legion." Their muffled words are hard to understand, and not just because the masks have only a small breathing slit.

Anonymous is the name of an international activist group that has kept the authorities on their toes for months. It plans its campaigns on the Internet -- and most of its "raids" take place there too.

In December, for example, the group shut down the websites of PayPal and Visa, because these companies had blocked accounts used for donations to WikiLeaks. The so-called denial-of-service (DOS) attacks were primitive but effective. DOS attacks do not require the expertise of hackers, but merely a piece of software called "Low Orbit Ion Cannon," which sends a huge volume of pointless inquiries to a website until its servers are shut down.

Anonymous claims that it has no leadership structure, and that it is modeled on a so-called "hive mind." The online mob uses Twitter and chat rooms to determine its targets, and then it sounds the attack: "Fire! Fire! Fire!" WikiLeaks itself has formally distanced itself from the group's campaigns.

The FBI has conducted more than 40 searches, and investigators say that those involved could face prison sentences of up to 10 years. But who are they? After infiltrating the Anonymous network, the security firm HBGary Federal concluded that it boils down to a hard core of about 30 key players. The online detectives had intended to triumphantly unveil their results at a security conference in San Francisco this week. Instead, the company was humiliated when hackers penetrated its server and allegedly stole more than 60,000 emails. "You have blindly charged into the Anonymous hive, a hive from which you've tried to steal honey," a revenge message read. "You've angered the hive, and now you will be stung."

Anonymous has divided the net community. When the hacker magazine 2600 condemned the online attacks, describing them as "boorish" and "childish" in a press release, its website also came under fire.

"This is the first real info war, and you are the soldiers," John Perry Barlow, a former lyricist for the Grateful Dead, tweeted. Many activists and media outlets promptly parroted Barlow's tweet.

But how should a DOS attack be treated? Is it like a sit-in? Or is it more like sabotage? Or possibly extortion? It's a question that will soon be the subject of several court cases.

Five arrests have already been made in England. The suspects, who are between the ages of 15 and 26, were released on bail. One of them goes by the nickname "Coldblood" and is believed to be one of the ringleaders. He identified himself as a spokesman for Anonymous, foolishly without wearing a mask.

The swarm did not react to his arrest with statements of solidarity, but with derision. "Coldblood is simply embarrassing," one of the masked activists in London mumbles. "Anonymous is decentralized. We have no leaders."

When the Dutch police arrested a 16-year-old boy, by contrast, Anonymous used its ion cannon to open fire on the public prosecutor's office. In doing so, however, it provided the investigators with new incriminating material free of charge. The design of the software is so unsophisticated that it reveals the IP address of the attacker. The next arrest followed soon afterwards.

"I knew what I was doing, and I stand by it," says Martijn G. "I support freedom of opinion on the Web." Martijn G. is 19 and lives with his parents in a small house in the town of Sappemeer. He is angry because the police confiscated his mobile phone and his computer, merely because he had wanted to try out the program, as he claims. He is waiting for the indictment. He can't say anything else about the case, he says, because his father doesn't want him to.

"The punishment will probably depend very much on the judge's opinion," says Jana Herwig. Was it an act of sabotage or protest? Herwig is earning a Ph.D. in Media Studies in Vienna, with an emphasis on cyber cultures. She views participation in Anonymous as a ritualized test of courage on the road to adulthood.

The members of the movement worship "moot," the founder of 4chan, a so-called imageboard with more than 10 million visitors a month, as a founding figure. On 4chan, members exchange funny cat pictures, vulgar remarks and pornography. New subcultures are constantly developing among the visitors to 4chan, and one of them is Anonymous.

Christopher Poole is moot's real name and he was 15 when he founded 4chan. Eight years later, he still comes across like a shy teenager. Nevertheless, the elite of the digital culture were transfixed when he made an appearance in early February at the "Transmediale" art festival in Berlin's House of World Cultures.

4chan is a carnival of the obscene. In particular, a group called "/b/" is legendary. Its members call themselves "/b/tards" and inexperienced members are referred to as "newfags" and are greeted with the demand: "Tits or GTFO."

The contributions rush across the screen, often gone within a minute, pushed aside by a flood of new filth. The forum has no memory. What's gone is gone. There are few rules, except that child pornography and animal cruelty are taboo, as is anything that's politically correct.

Anonymous packs are constantly embarking on group pranks. They take over game worlds to set up their avatars in swastika formation. Or they annoy strangers by ordering large numbers of pizzas or bibles delivered to their homes. Another prank is called "black fax," which involves flooding fax machines with black pages until the costly toner cartridges are empty. The Church of Scientology is one of their favorite targets.

"moot," on the other hand, is worshipped as a "god" and "dictator." In 2009, Time named him the "most influential person of the year" on its website. In the online voting process, fans voted for him 16 million times.

In person, the master of the /b/tards is a thoughtful man. With his legs crossed, he ponders the value of free speech as a source of creativity. Anonymity is under threat in the days of self-exposure on Facebook, he says. He feels like a dinosaur sometimes, he says with a boyish smile.

"4chan is a sort of idea factory. New jargon, new humor and new images are constantly being created there," raves Gabriella Coleman, an anthropologist at New York University. "If you're away from it for a week, you hardly know what's going on anymore."

Does the disinhibition of the nameless, their crude language and sexism, give us an unadulterated look into the chasms of the collective unconscious? No, says Coleman, because the machismo is nothing but show. She estimates that about a third of the /b/tards are women.

Digital subcultures per se are nothing new, but classic hacker groups have been seen as hermetic and elitist until now. Anonymous, on the other hand, is open to everyone, to a point beyond all recognition. All it takes to be a part of it is to buy a mask for €9 at Amazon. There is no manifesto or consensus.

Removing Their Masks at the Door

Meathead, a law student, is relatively well groomed. He used to attend meetings of the Pirate Party, but the discussions bored him. He preferred action, which led him to begin launching his own DOS attacks. Who did he attack? "I have no idea. It was always these IP addresses that they were giving me," he says. He doesn't care who is being targeted. He simply trusts the swarm.

He Googled the punishment he would receive if caught. Section 303b of the German Criminal Code defines what he does as computer sabotage. "If you attack government agencies or critical infrastructure, you can easily be put away for a few years," he says nonchalantly.

Where do the pranks end and where does the crime begin? DOS attacks can be seen as acts of protest, but hacking into email accounts certainly cannot. Perhaps the upcoming trials against Coldblood and his cohort will shed some light on the issue.

The hearing in London is over, the press is leaving and the protesters in their smiling masks are heading in the direction of the nearest pub, righteously exhausted after spending hours engaging in an act of provocation. They politely remove their masks at the door. They would get in the way of conversation -- and of drinking a beer at the end of a good day's work. 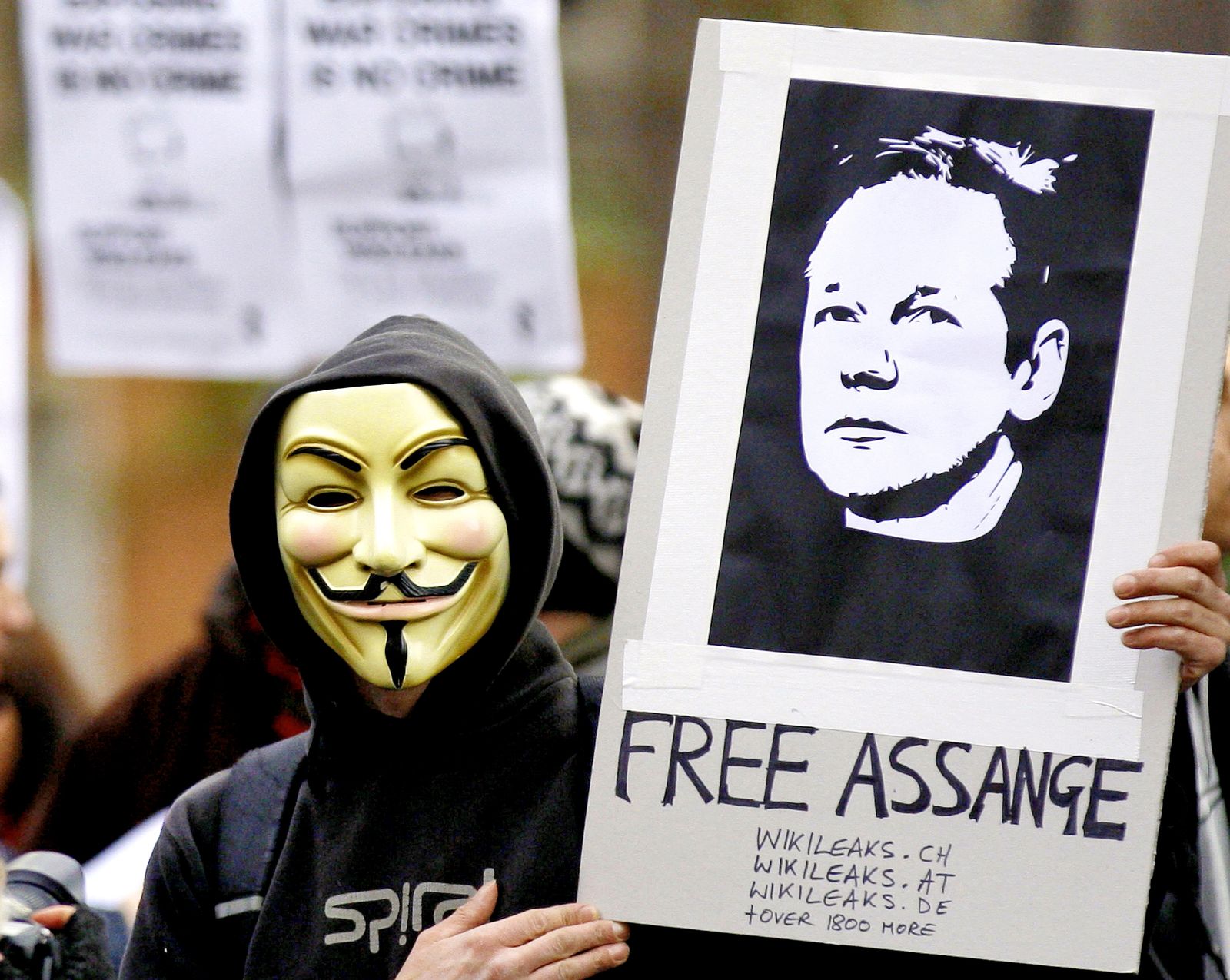 A member of "Anonymous" demonstrating for WikiLeaks founder Julian Assange in London earlier this month.