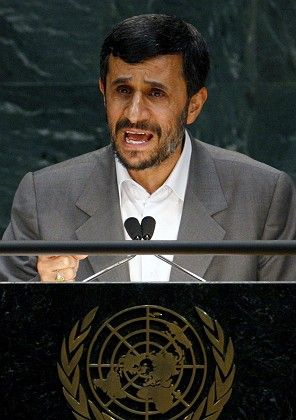 Iranian President Mahmoud Ahmadinejad was defiant in his speech to the UN General Assembly.

One day after his controversial appearance at Columbia University, Iranian President Mahmoud Ahmadinejad addressed the United Nations General Assembly in New York Tuesday -- and his remarks were predictably belligerent.

Ahmadinejad made it clear in his speech that Iran does not intend to comply with UN Security Council sanctions aimed at Iran's nuclear program. "In the last two years, abusing the Security Council, the arrogant powers have repeatedly accused Iran and even made military threats and imposed illegal sanctions against it," the Iranian leader said. "The nuclear issue of Iran is now closed and has turned into an ordinary agency matter," he added.

Iran has decided to pursue the monitoring of its nuclear program "through its appropriate legal path," namely the UN's nuclear watchdog, the International Atomic Energy Agency, he said, and will "disregard unlawful and political impositions by the arrogant powers," he said.

Ahmadinejad later told reporters that as a purely legal issue the dispute "should have been examined solely within the framework of the IAEA," adding that "certain big powers ... have made every effort to turn a simple legal issue into a very loud, controversial, political issue." IAEA chief Mohamed El Baradei and Iranian officials agreed in July that Tehran would answer questions about its nuclear activity from IAEA experts by December.

In his General Assembly speech, Ahmadinejad also condemned human rights abuses such as setting up secret prisons and unlawful abductions by "certain powers" -- an apparent reference to the US and Israel -- and criticized United States policy on Iraq.

The US delegation walked out when Ahmadinejad was ushered to the podium to speak. The Iranian leader had been in the chamber earlier when US President George W. Bush made his speech, which barely mentioned Iran, but reportedly pulled out his earpiece before Bush began talking.

The foreign ministers of the five permanent members of the UN Security Council -- the US, France, China, Russia and the United Kingdom -- plus Germany are due to meet on Friday on the sidelines of the UN General Assembly to discuss imposing additional sanctions on Iran over its nuclear program.

The US and France are pushing for a third Security Council sanctions resolution against Iran, to expand upon the existing two rounds of sanctions. Iran insists it is only interested in developing nuclear energy for civilian use, but the international community suspects it of pursuing nuclear weapons.

If this week's talks fail, French President Nicolas Sarkozy has proposed that the European Union impose additional sanctions of its own on Iran -- a move that the US supports but Berlin opposes.

Earlier on Tuesday, Sarkozy warned the UN General Assembly that allowing Iran to arm itself with nuclear weapons would be an "unacceptable risk to stability in the region and in the world," saying that there will not be peace "if the international community falters in the face of the proliferation of nuclear arms." The Iranian crisis "will only be resolved if firmness and dialogue go hand-in-hand," he said.

Speaking on Tuesday evening, German Chancellor Angela Merkel told the General Assembly that Iran could not be allowed to develop nuclear weapons. "Let us not fool ourselves," she said. "If Iran were to acquire the nuclear bomb, the consequences would be disastrous -- first and foremost for the existence of Israel, secondly for the entire region and ultimately for all of us in Europe and the world."

She said the international community had to prevent Iran from getting the bomb. "Germany will firmly advocate additional harsher sanctions -- if Iran does not comply," Merkel said.

The burden of proof was on Tehran, she said: "The world does not have to prove that Iran is not building an atom bomb. Iran has to convince the world that it doesn't want an atomic bomb."

Merkel also called in her speech for Germany to be granted a permanent seat on the Security Council. "Germany is prepared to take on more responsibility, also by taking over one of the permanent Security Council seats," she said.

The current composition of the Security Council no longer reflects today's world, she said: "For that reason there is no alternative but to adapt it to political reality."