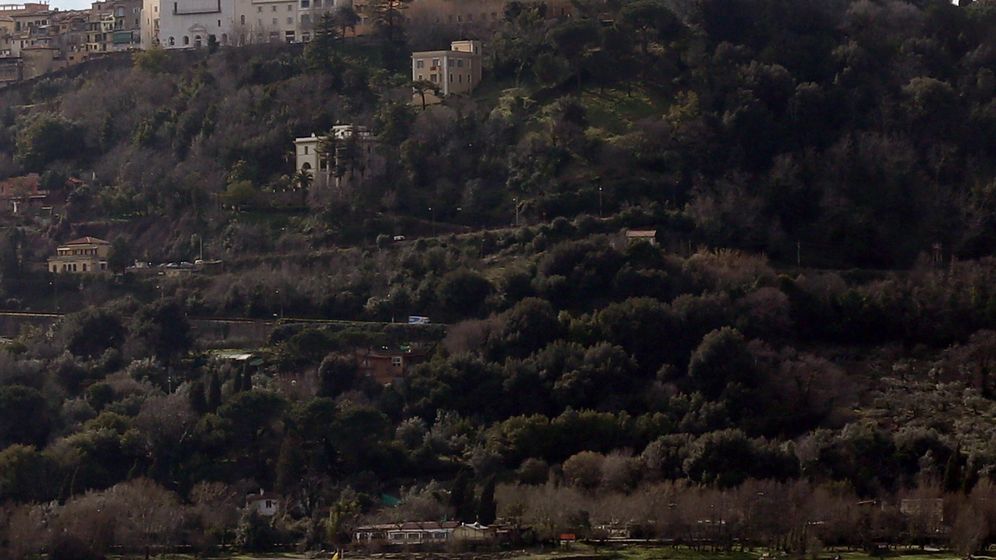 In the late evening of Aug. 6, 1978, a heavy iron chain was pulled across the door of the papal summer palace. All the lights in the area were turned off, and the flag was set at half-mast. The fountain on the village square in front of the palace ran dry, and the bells of the nearby church began to ring. These symbolic signs marked the end of Pope Paul VI's term in office. He had died at his summer residence at 9:40 p.m., a few hours after having a massive heart attack.

Just like his predecessors, Pope Paul had withdrawn from the Vatican when the hot summer months began, heading to Castel Gandolfo to enjoy the cool climate and relax during long strolls through the gardens at the almost 400-year-old papal palace.

At 8 p.m. on Feb. 28, 2013, the third papacy in the history of the Catholic Church will come to an end at this history-rich location in the Alban Hills, where Pope Benedict XVI will go while a conclave is held to choose his successor. It's a striking place, and not just because of its long history. It was here that Emperor Domitian (AD 81-96) once ordered the bloody persecution of early Christians. Roman emperors had come to appreciate the climate it offered at 426 meters (1,400 feet) above sea level, and Domitian had a palace erected here. Around 1200, the Gandolfi family from Genoa, which Castel Gandolfi would later be named after, built a villa here. Since 1596, the main part of what is now the papal summer residence has been owned by the Vatican.

Urban VIII (1623-1649) had the massive summer palace built and was the first pope to vacation here. German writer Johann Wolfgang von Goethe visited the town in 1787, while on his famous Italian journey, and gushingly praised its idyllic location on the deep-blue Lake Albano. The popes held it in equal esteem, and almost all of them would make annual pilgrimages to the site.

This tradition came to a sudden end in 1870, when Italian soldiers took control of the Papal State and then-Pope Pius IX declared himself a "prisoner in the Vatican" in protest. Legend holds that the pope lived out the last eight years of his life without setting foot outside Rome's Apostolic Palace, the residence of modern-day popes. The same fate awaited his successors, leaving Castel Gandolfo to fall into a type of hibernation for several decades.

This all ended in 1929, when the Lateran Treaty, signed with what was then the Kingdom of Italy, guaranteed the Holy See its summer residence in perpetuity. Castel Gandolfo was designated part of the territory of the Vatican City State and would enjoy extraterritorial status from then on.

In 1934, Pius XI became the first 20th-century pope to visit the palace. He had the old masonry repaired and outfitted the residence with radios, telephones, heating, electric lights and an elevator. A year later, he celebrated the establishment of a new telescope for the Vatican Observatory on the palace's roof. The astronomers of the Papal See migrated from the Vatican Gardens to Castel Gandolfo because all the electric lights in the Eternal City had made things too bright. Along with them came the Vatican's meteorite collection, one of the most significant collections of cosmic rocks in the world.

Pius XI also had greenhouses and cattle barns set up so that the Vatican could provide itself with food -- a far-sighted decision. In May 1938, when Hitler made an official state visit to Rome to meet with Mussolini and the entire city was decked with Nazi flags, Pius XI and Cardinal Secretary of State Pacelli, the later Pope Pius XII, demonstrably withdrew to Castel Gandolfo. The pope was intent on avoiding having to meet with the German dictator, whom he had sharply criticized -- without naming Hitler directly -- as a "prophet of delusion" a year earlier in his "Mit brennender Sorge" ("With burning concern") encyclical. Pius XI remained at Castel Gandolfo for six months before returning to Rome in late October 1938, where he died shortly thereafter.

In August 1939, the new pope, Pius XII, made a global appeal to the world from Castel Gandolfo: "Nothing is lost with peace, everything may be lost in a war." But his warnings were ignored and, within a few years, both war and Nazi terror would also reach Rome and its surroundings. In 1943, German soldiers would occupy the Eternal City and began deporting Roman Jews. Pius XII initially didn't react to the persecution of Jews taking place outside his windows. Later, he would order churches, cloisters and other Vatican properties -- including Castel Gandolfo -- to be used to shelter for those being targeted.

Several hundred Jews were supposedly kept hidden and provided with kosher food at the summer residence. Gaining more precise information about this matter is difficult because the related Vatican files are still sealed. What is certain, however, is that in October 1943, the Vatican dispatched a contingent of papal Palatine Guards to stand guard at Castel Gandolfo. This unit was then gradually strengthened by volunteers until the Vatican exclave was protected by thousands.

In the spring of 1944, thousands of people from nearby took advantage of the special legal status of Castel Gandolfo to seek refuge from Allied bombing raids. The territory of the neutral Vatican was considered inviolable and safe from attack. Even so, on the morning of February 10, a bomb dropped from a plane fell on the summer residence right when a crowd of people was gathering for the distribution of the daily milk ration. Over the following days, more than 500 corpses were dug out from beneath the wreckage.

At roughly the same time, the papal chambers had come to resemble a maternity ward. Pregnant refugees had sought safety there, and the screams of newborn babies were heard in the papal bedroom. The Vatican says that some 40 children were born at Castel Gandolfo during this period. In thanks, many mothers even named their children after Pius XII, christening them Pio, the Italian version of Pius, or Eugenio, the pope's given first name.

Pius XII himself didn't return to Castel Gandolfo until 1946, and his last visit was on July 24, 1958. By that point, he only had two months to live. In early October, he suffered two strokes in the papal summer residence, which left him in agony for several days. For the first time, the eyes of the world were directed not on Rome, but on Castel Gandolfo, some 25 kilometers away.

'I Want the Dead Pope Live!'

The TV crews arrived, Vatican Radio set up a makeshift radio studio in the summer palace, and newspapers dispatched special correspondents, who were forced to sit outside its doors around the clock. In the competition to be the first to report the pope's death, there were a number of premature announcements. The news coordinator in Brussels of Eurovision, the pan-European television network that was launched in 1950 to share content (and that organizes the annual song contest), reportedly exhorted his counterparts at Rai, the Italian public broadcaster, to stay vigilant with the words "I want the dead pope live!" He finally died early on the morning of Oct. 9, 1958.

John Paul II precipitated a media event of a completely different sort, as the first pope to use the papal summer residence for athletic activities. He played tennis, kicked around a ball with the sons of the gardeners and swam laps in a pool specially built for him. To those who criticized the pool's construction, he countered that electing a new pope would be even more expensive. Paparazzi took advantage of the opportunity and snapped photographs of the pope in his swimming trunks.

In the mid-1980s, the Polish pope once again made his summer residence a topic of conversation by inviting prominent philosophers and theologians for visits. During the so-called Castel Gandolfo Talks, held in the Swiss Hall, the pope would sit in his armchair in the corner listening in silence. If he was interested in or disagreed with something in one of the lectures, he would invite the person who delivered it to eat lunch with him in his dining room.

A Place for Decisions

Benedict XVI, the professor pope, continued this tradition of inviting prominent figures to the summer residence. In addition to former Ph.D. students and classmates, he would host others at Castel Gandolfo, including church critic Hans Küng, German Chancellor Angela Merkel, Bernand Fellay, the superior general of the ultraconservative Society of Saint Pius X (SSPX), and the ambassadors of several Muslim countries. The latter were quickly summoned to Gandolfo in September 2006 to smooth things over after he had sparked an uproar with an address he delivered in the German city of Regensburg that leading figures in Islam criticized as "hate speech."

The elderly pope is now withdrawing to Castel Gandolfo while his successor is being chosen in Rome. But there he will also be confronted with the dark sides of his papacy. This residence in the Alban Hills might have also been the place where he reached his decision to step down. It was here that he withdrew to in early April 2012, after an exhausting trip to Mexico and Cuba and the energy-sapping Easter celebrations.

Less than a year later, he is returning here from Rome as a pope emeritus. Once his successor is installed, he will return to the Vatican and reside in the Mater Ecclesiae monastery.