The response from Libya came quickly. With several Western nations preparing to use military force in accordance with a United Nations Security Council resolution passed on Thursday in New York, Libya on Friday announced an abrupt cessation of hostilities.

"We decided on an immediate ceasefire and an immediate stop to all military operations," Libyan Foreign Minister Moussa Koussa told reporters on Friday in Tripoli. He also said that all foreigners and foreign assets in the country would be protected.

It is a move which is reminiscent of the kind of cat-and-mouse game engaged in for years by former Iraqi dictator Saddam Hussein prior to the US invasion in 2003. And it remains to be seen exactly how the West will react.

In an appearance on BBC television immediately following Koussa's statement, British Prime Minister David Cameron said that Gadhafi will be judged by "actions not words."

"What is absolutely clear is the UN Security Council resolution said he must stop what he is doing, brutalizing his people," Cameron said. "If not, all necessary measures can follow to make him stop. That is what we agreed last night, that is what we are preparing for and we'll judge him by what he does."

German Chancellor Angela Merkel, whose country abstained from the resolution vote in its role as a holder of a non-permanent Security Council seat, has also announced her intention to attend. Berlin is discussing with NATO the possibility of taking over AWACS reconnaissance duties in Afghanistan to free-up American surveillance planes for operations in Libya.

In addition to the summit, several countries have taken steps to do their part in implementing the UN resolution, which also authorized the use of "all necessary measures" to protect Libyan civilians from pro-Gadhafi forces in the country.

Germany has declined a direct role in the mission and joined China and Russia in abstaining from Thursday's Security Council vote, which was 10-0 in favor of the resolution. It had been supported most vehemently by France, Great Britain and Lebanon, with the US having joined the pro-no-fly zone camp in recent days.

In comments to German parliament on Friday, Westerwelle rationalized his government's position by expressing concern over possible civilian victims. "Any military operation brings civilian victims," he said. "We know that from painful experience. We have often talked about this regarding operations in Afghanistan and Iraq."

Rebels in Benghazi have expressed doubt about the sincerity of Gadhafi's ceasefire offer and have also reported ongoing fighting in town of Misurata. In north-eastern Libya, where rebels had been firmly ensconced for weeks prior to recent advances in the region by pro-Gadhafi forces, skepticism reigned. "It's just for TV," said Salah Hussein, who was watching the ceasefire announcement, according to Reuters. "In fact, he is still fighting in Ajdabiyah. He is trying to get more time. He is crazy and will fight till he dies."

Many have interpreted Gadhafi's rapid announcement as an indication that he was prepared for the UN resolution. Indeed, the ceasefire has quickly returned the ball to the court of the international community. And while the West has pledged to move ahead with installing the no-fly zone, plenty of questions remain. What, for example, will the West do should the rebels choose to use the cover of the no-fly zone for further operations? The UN resolution, after all, calls for the protection of civilians, not for regime change.

Furthermore, should sorties ultimately become necessary, Western militaries don't really know what to expect. On paper, Gadhafi has 200 Soviet-era anti-aircraft batteries from the 1970s and 1980s. How many of them might be operational is unclear. The last time they were used was way back in 1986, when the US carried out air strikes on Tripoli and Benghazi -- and Libyan air defenses performed miserably.

US Secretary of State Hillary Clinton on Friday seemed to indicate that Gadhafi's chess move was not going to provide him much respite. Speaking in Washington, Clinton said that international action was aimed at ousting the Libyan leader "one step at a time."

"Colonel Gadhafi's refusal to hear the repeated calls up until now to halt violence against his own people has left us with no other choice but to pursue this course of action," she said. 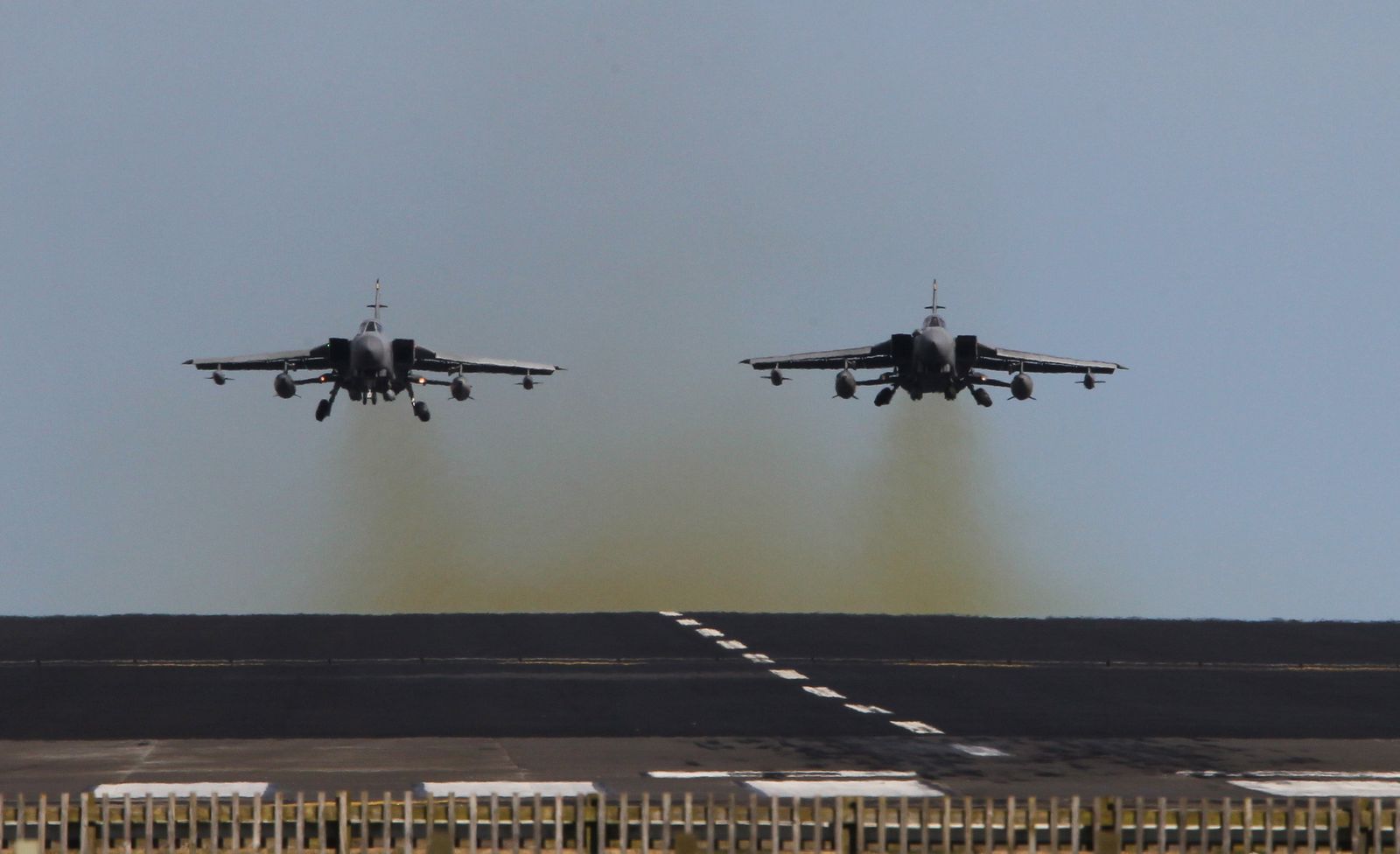 British Tornado aircraft during a training exercise in Scotland on Friday. London is sending aircraft of this type to the Mediterranean to help impose the no-fly zone over Libya.