The decorations in the office of Shahjahan Sardari seem rather militaristic for an election organizer. His laptop is decorated with bullet hole stickers and a machine gun sits next to his desk. "Just in case the guards aren't enough," says Sardari. Armed men stand in the narrow hallway outside his door. They aren't police men, Sardari says, rather they are "loyal Pashtun tribal allies" of the head of the Independent Election Committee (IEC) in Kunduz.

Security, attacks and no-go areas -- these are the topics up for discussion on this morning, some four weeks before the Sept. 18 parliamentary elections in Afghanistan. "In theory, everything has been prepared, even the ballots have already arrived," says the brawny functionary. "But in the end, everything depends on security." Sardari looks out the window. His office is surrounded by three-meter (almost 10 feet) high walls to protect it from possible attacks. He seldom goes out.

Whether and how Afghanistan's 17.5 million eligible voters can cast their ballots remains extremely uncertain. Despite a boost in the number of NATO troops and an accelerated training program for the Afghan army, the number of attacks, Taliban raids and security breaches is on the rise. In addition, there are almost daily reports of attacks on candidates (three have been killed in recent weeks), their offices and their campaign helpers.

Everyone who is campaigning for a seat in parliament is in imminent danger.

At the same time, the looming election puts the Afghan government under President Hamid Karzai as well as NATO itself under enormous pressure. Karzai wants to use the elections to demonstrate just how far his security forces have come and that they are able to control large areas of Afghanistan. Indeed, he has recently announced his intention to expel all private security companies from Afghanistan. For the United States and the rest of NATO, on the other hand, free and fair elections are seen as an important step on the road to eventual withdrawal. Should the vote end in fiasco, any pull-out by Western troops in the near future becomes unlikely.

Risk of a Farce

The chances for a successful poll do not look good. Just recently, the IEC in faraway Kabul published a number of sobering statistics. Of a planned 6,835 polling stations, initial estimates indicate that only 5,897 can be opened. Neither the Afghan army nor NATO's International Security Assistance Force (ISAF) is willing to guarantee the safety of the remaining 938 -- fully 14 percent of the planned total.

Indeed, the parliamentary elections are at risk of becoming a farce. In some areas, say independent observers, campaigning is virtually impossible. "There will be no fair elections in the south because no one can ensure security in the region," says political analyst Haroun Mir. "That essentially means that the vote will not be fair in half the country." Mir says that the no-go areas in Afghanistan begin just beyond the borders of Kabul.

Many of the some 2,500 candidates for the 249 seats in parliament are no longer able to campaign at all. During the last campaign in 2005, for example, parliamentarian Daoud Sultanzoi of Kabul drove to his constituency, some two hours south of the capital, every day. This time around, the trip is impossible because the roads are controlled by the Taliban. Recently, his brother was abducted and murdered. "Campaigning while fearing for your life couldn't work in any country on earth," Sultanzoi says.

But it's not just dangerous in the south, says analyst Haroun Mir. He says his warnings are just as valid for the northern provinces of Kunduz and Baghlan, where the German military is based.

A comparison shows just how catastrophic the situation has become in the north. The region around Mazar-i-Sharif is still considered safe, but in Kunduz, the number of polling stations which have been abandoned is higher than elsewhere in the country. Of 217 planned stations, fully 45 will not likely be opened -- around 21 percent. Voters in the Taliban stronghold of Chahar Dara will have a particularly difficult time casting their ballots. Only five polling stations are to be opened there.

"The situation in Kunduz and Baghlan is precarious," says Martin Kobler, the deputy UN representative in Kabul. He says that so many polling stations have been closed because the IEC only wants to open stations in places where a free and fair election can be guaranteed. "People in some villages will have to walk or drive long distances in order to cast their ballots," he says. "But otherwise, the danger to them would be too great."

Sardari in Kunduz doubts whether even the reduced number of polling stations can be achieved. "So far, we have just been using the numbers that have been passed on to us by the security authorities," he admits. He adds that he himself would never consider setting foot in Chahar Dara. Indeed, he says, it will be difficult to check whether voting there proceeds in an orderly fashion. "We would love to have many election observers," Sardari says, "but people are afraid."

In Chahar Dara, there are few indications that elections are to be held in four weeks time. A few yellowed campaign posters hang in the district center, a forsaken intersection of two gravel roads where the fortress-like district police station stands. No candidates or election volunteers would even consider visiting the villages just a few kilometers to the south. "Anyone who puts up a poster on his house risks death," reports a resident of Isa Khel, a village under the control of the Taliban.

It is an awkward situation. Both President Karzai and NATO need the vote to be successful so badly that they are ignoring the difficult realities that face the country. Karzai's spokesman regularly repeats the pledge that officials are doing all they can to ensure safe and secure elections. NATO officials, for their part, simply intone that the elections must be free and fair. They like to point out that even in the south, there will be polling stations.

A number of potential problems are simply ignored, such as the fact that election observers will only be able to monitor 60 percent of the polling stations. The increasing numbers of attacks on candidates and election helpers are likewise being dismissed as isolated occurrences. Finally, the fact that old voter ID cards -- hundreds of thousands of which were used for non-existent voters in the last election -- are being used in next month's poll is not seen as a problem. "That's just the way things are in Afghanistan," said one diplomat when asked about the issue.

The Taliban, for its part, has already threatened with death anyone, whether voter or election helper, who takes part in the elections. The Taliban sees the vote as an opportunity to demonstrate just how powerful they have become -- and to show how little control the central government has over the country. Communications intercepted by NATO show that the Taliban is planning to use brutal attacks to disrupt the voting.

'If We Are Both Still Alive'

During the presidential elections in 2009, Kunduz was the target of one such attack. The Taliban fired dozens of rockets at the city, terrifying the population. Several polling stations were unable to open at all. In some places, potential voters decided not to risk it and stayed home. "We hope that it will be better this time around," says Kunduz Governor Mohammed Omar. The Afghan army is currently doing its best to find possible rocket depots around Kunduz.

The German military, whose mandate includes providing security for elections, is not going to become involved this time around. Strategists are speaking of the "Afghanistan face" of the election and want to avoid any accusations of external manipulation. German troops will only engage in extreme situations, it is said. What such a situation might look like is unclear.

Few, it would seem, are prepared to address the problems with the coming election head on. The international community expressed outrage at Karzai's well-organized manipulation of the presidential election last year. This time around, however, hope seems to be the only strategy. Several sources cynically observed that Karzai has disempowered parliament to such a degree that there is no need for him to manipulate the outcome of next month's elections.

Election organizer Sardari, for his part, resorts to black humor. When taking leave of his German visitor, he wished health and happiness. "I hope we will see each other again after the election," he said. "If we are both still alive." 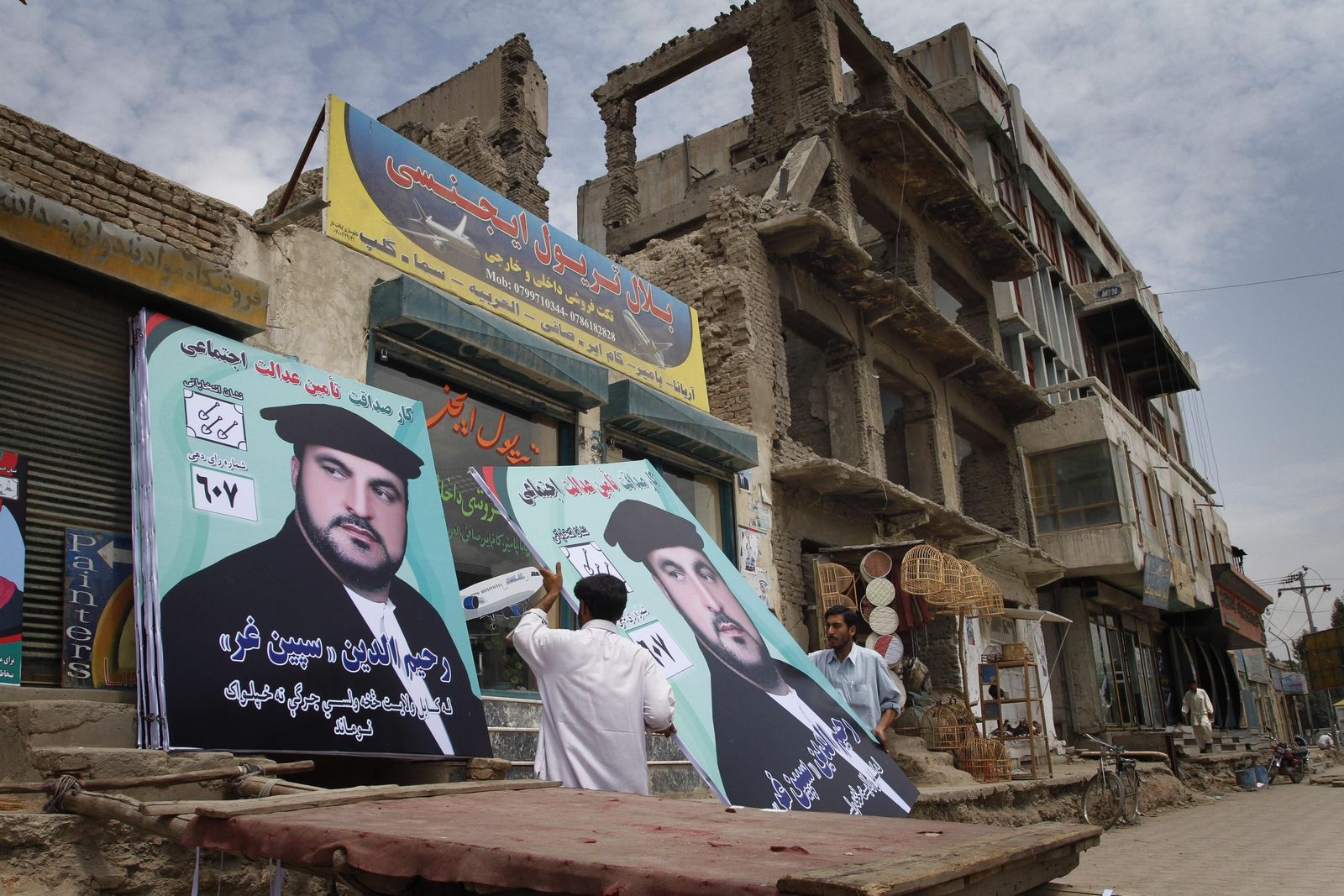 Election posters being hung in Kabul, a dangerous undertaking in many parts of the country.