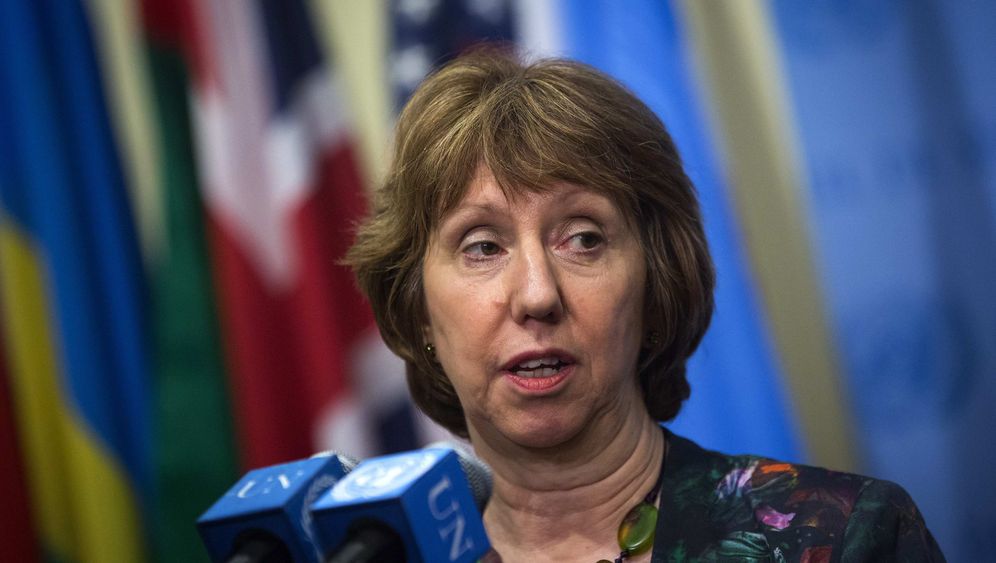 The title she puts on her official business card -- "High Representative of the Union for Foreign Affairs and Security Policy" -- has an illustrious ring. But, in reality, Catherine Ashton's job is rarely glamorous. After she was appointed to the position in 2009, the British diplomat had to endure being called the "fourth choice" in the press -- and even a "garden gnome." And while her counterparts from the United States and Asia zip around in their own jets to summit meetings, Ashton has to patiently wait for commercial flights because the EU doesn't treat her to an official aircraft.

But now the 57-year-old baroness is suddenly at the center of world diplomacy. And whenever she is mentioned, she earns praise for her hard-nosed negotiating skills, her stamina and her diplomatic talents. It is said that US Secretary of State John Kerry has much faith in her. "She is discrete and perceptive, but also tenacious. That makes her an ideal negotiator," says Alexander Graf Lambsdorff, the head of Germany's business-friendly Free Democratic Party (FDP) in the European Parliament and a member of its Committee on Foreign Affairs.

What's the cause for all this enthusiasm? After negotiations about the Iran nuclear issue appeared on the brink of collapse, the main parties are finally returning to the table. The next round of talks is scheduled for Oct. 15 in Geneva. The West's aim at the meetings in Switzerland is to test whether the Iranians are actually "serious about their willingness to abide by international norms and international law and international requirements and resolutions," as US President Barack Obama said Monday evening after meeting with Israeli Prime Minister Benjamin Netanyahu at the White House.

The word in diplomatic circles is that this diplomatic renaissance can primarily be attributed to Ashton. In recent months, she has spoken on the phone four times with Iranian Foreign Minister Mohammed Javad Zarif, who studied in the United States and gives the impression of being effectively pro-West.

Ashton was the one who came up with the idea of bringing Zarif together with representatives of the P5+1, the international group in charge of negotiating with Iran about its nuclear program that is made up of Germany and the five permanent member states on the UN Security Council -- China, France, Russia, the UK and the US. As a result, the often quarrelling group has embraced Ashton as its chief negotiator.

She, in turn, is doing her part to see that the new Iranian government focuses on fostering better relations between Iran and the European Union. "One of the main objectives of the new Iranian foreign policy is to put aside misunderstandings and to begin a new political era via a better understanding," Iranian President Hassan Rohani recently wrote to Martin Schulz, president of the European Parliament.

Chances of a Thaw in Relations?

Leaders in Tehran welcomed the fact that, in early September, the European Court of Justice stated that some of the EU sanctions against Iran should be lifted. The court ruled to annul the 2011 acts of the European Council that froze the funds in Europe of seven Iranian companies and one Iranian national, all of which had been identified as being involved in nuclear proliferation, on the grounds that its allegations hadn't been sufficiently substantiated and that there had been certain procedural errors.

Of course, it has already happened many times that official talks have begun on Iran's nuclear program and ended in stalemate. But representatives with the P5+1, also known as the Group of Six, claim to have the impression that the new Iranian government is serious about things this time around. What's more, the West assumes Rohani has secured the blessing of Ayatollah Ali Khamenei, Iran's supreme religious leader, to launch his diplomatic charm offensive.

Iranian negotiators have let it be known they want to resolve the nuclear dispute within six to 12 months. Furthermore, during the election campaign, Rohani pledged to his supporters that he would improve Iran's economic situation, which can only happen if international sanctions are lifted.

Hard-liners in Tehran, who oppose any compromises related to the nuclear program, are keeping a close eye on Rohani. This has prompted him, for example, to turn down President Obama's offer to meet on the sidelines of the United Nations General Assembly currently being held in New York. Indeed, Rohani already sparked fiery protests at home after speaking on the phone with Obama in what was the first official contact between Iranian and American heads of state since 1979.

Likewise, the new Iranian government has yet to make any substantial concessions. But time is running short for the West, and a report published in August by the International Atomic Energy Agency (IAEA), stating that Iran is continuing to pursue its uranium-enrichment activities unabated, has only increased the pressure. At the White House on Monday, Netanyahu repeated his warning that the West should not let itself be hoodwinked by Tehran's charm offensive, stressing that: "Iran is committed to Israel's destruction." President Obama also struck a tough note, saying: "It is absolutely clear that words are not sufficient."

EU diplomats have ruled out lifting the sanctions against Iran before the country at least agrees to halt uranium enrichment. European Parliament member Alexander Graf Lambsdorff, for example, is wary. "Rohani finds himself in a situation that is similarly complex to that of the new pope, Francis," the foreign affairs expert says. "Both are trying to break up an encrusted system. And, at this point, no one knows whether they will succeed or whether those backing the status quo will prove to be too powerful."