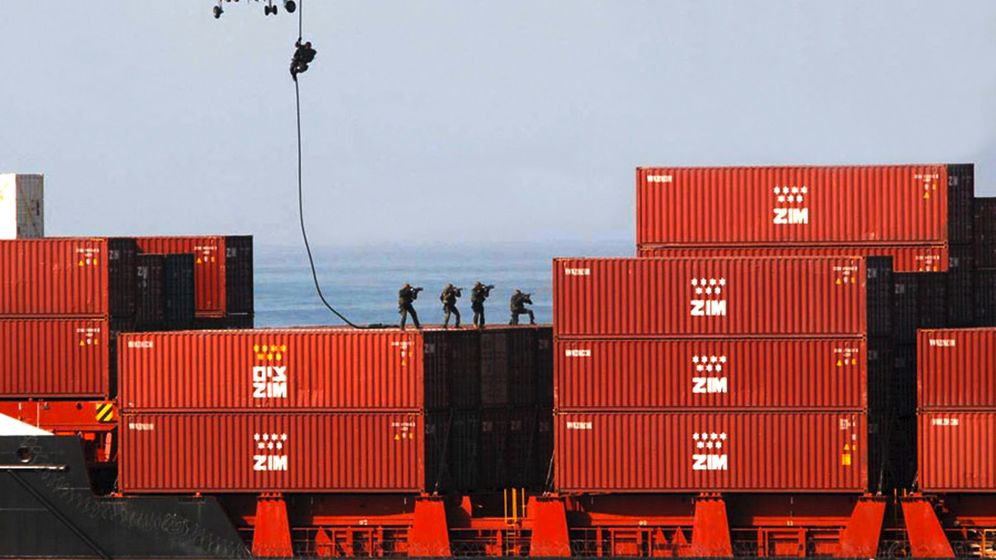 Hans Lodder already knows what command he will issue next week on Friday. Shortly before the Dutch frigate Tromp puts into port at the Den Helder naval base in northern Holland, Captain Lodder will order his crew to bring the broom on deck. It is a tradition on board the Tromp that dates back to the ship's namesake, a Dutch admiral who introduced the custom in 1652. "As a symbol that he has swept the seas clean of those who do not belong there," says Lodder.

This time it is with particular pride that they will fasten the broom to the mast. It was Lodder and his Dutch special forces who conducted a spectacular operation in the Indian Ocean roughly 1,000 km (600 miles) off the coast of Somalia, storming the German cargo ship MS Taipan and capturing the 10 Somalis who had seized the vessel.

Captain Lodder has good reason to be proud. His team took 10 prisoners and there were no casualties -- only one soldier received a slight concussion. It was the most successful anti-pirate operation ever undertaken in the Gulf of Aden.

But this has created problems for others, especially the German government. Following extensive negotiations, it is expected that the 10 alleged pirates will soon be brought to Germany to stand trial in a Hamburg court -- and they will probably not be the last ones to be extradited to Germany. Until recently, Western countries have been able to send apprehended pirate suspects to Kenya to be tried in a court of law. But now the Kenyans are refusing to cooperate, and there is no other African country in sight that is able to assume their role.

This latest incident of piracy off the east coast of Africa could have actually ended tragically because it was more violent than initially reported. Only roughly half an hour after the first sighting of a suspicious speedboat was reported to MS Taipan Captain Dierk E. around noon on Easter Monday, heavily armed Somalis were already on board and had opened fire on the bridge with Kalashnikov assault rifles.

The captain of the German cargo ship is in his sixties and an experienced seaman. As a precaution, he had already sent the majority of his 15-man crew to the secure "panic room" when the first shots smashed through the safety glass of the bridge. Bullets and shards of glass literally flew around his ears, the captain later told investigators.

In accordance with regulations, E. had stopped the engines to make it impossible to maneuver the ship. He had also sent distress calls to his shipping company and the EU's Atalanta anti-piracy mission before he sought shelter with the rest of the crew in the secure room below deck.

There he waited with the crew, which included a German ship's mechanic, while the Tromp sailed at full speed to cover the 50 nautical miles that separated it from the MS Taipan. The Dutch were only able to launch the operation in the first place because the entire crew had managed to barricade itself in a safe room. "When we heard that the pirates were already on board, we thought: 'That's it, we'll have to turn away,'" says Lodder. But since the crew was not in any immediate danger, the government in The Hague gave the green light. The German government was also consulted, and it said that it had no objections.

Then everything went very rapidly. The Dutch used their ship's helicopter to fly the special forces over the bow of the MS Taipan, where they rappelled down from a height of roughly 15 m (50 ft.). Shortly beforehand, the helicopter had sprayed machine-gun fire at the bridge of the MS Taipan, where the assailants had sought cover. "The pirates threw down their weapons and quickly surrendered," says the Dutch commander. The entire operation took less than 15 minutes.

The Dutch seized five Kalashnikovs, two antitank rocket launchers and two handguns. Then it took them over an hour before they located the right steel door deep within the hold of the MS Taipan and found the crew. Inside the secure room all that the occupants knew was that there had been a "terrible racket" outside.

Initial questioning of the suspects by a Dutch soldier who speaks fluent Somali brought to light a surprise for the crew of the Tromp. They had come across one of the men before. He is one of the 73 suspected pirates that the Dutch have already apprehended during the course of their mission. "At the time he told us that he was a poor fisherman, but no one is going to believe that this time," says Lodder, who arrived in Djibouti with the alleged pirates on board on Wednesday. From there they were flown in a military aircraft to Eindhoven, where German extradition requests already await them.

In the arrest warrants issued by the Hamburg Regional Court, Abdul Fata D. from Galcaio, Ahmet A. from Dhanane and eight other Somalis are accused of attempted kidnapping with intent to extort and attacking international shipping, which carries a minimum sentence of five years in prison.

Overwhelming evidence will be presented at the first trial of alleged Somali pirates in the Hamburg Regional Court. In contrast to earlier cases, the Somalis have been caught red-handed, there are numerous witnesses, and investigators from the Federal Office of Criminal Investigation have been able to secure evidence in Dubai, where the MS Taipan is currently being made seaworthy again. The proof includes dozens of Kalashnikov bullet holes in the windows of the ship's bridge.

The German government is deeply concerned, however, about the most spectacular Hamburg pirate trial to take place since the days of Klaus Störtebeker, a famous German pirate who lived during the 14th century. Berlin would have rather avoided a court case in Germany. But how? The MS Taipan belongs to a Hamburg shipping company, it sails under the German flag, and it had German crew members. This is clearly a case for the German courts. Furthermore, the Dutch threatened to release the 10 would-be kidnappers if the Germans failed to issue warrants for their arrest. In addition to upsetting Germany's European neighbors, this would have served as an open invitation to imitators.

Following an attack last spring on the MV Courier owned by German shipping company Gebrüder Winter, the suspects were extradited to Kenya to stand trial. But that was not an option this time around because the MS Taipan was attacked outside the area patrolled by the EU's Atalanta anti-piracy mission. The EU and the US had offered Kenya millions of dollars to legally pursue the pirate problem on African soil.

But these hopes have been dashed. The Kenyan trial against the nine suspects from last spring quickly ground to a halt. Then, a few weeks ago, Kenya suddenly canceled the cooperation agreement between the EU and the US, stating that the Kenyan criminal justice system was overwhelmed by the piracy cases and the prisons were overcrowded.

There are in effect currently more than 130 suspected pirates detained in the port city of Mombasa, and only two trials have been completed, in which 18 pirates have been sentenced to as many as 20 years in prison. These trials take years to complete, they are expensive, and the evidence is often far less conclusive than in the case of the MS Taipan.

The cooperation agreement was apparently also canceled because Kenyan Attorney General Amos Wako has been recently banned from entering the US. The Obama administration suspects him of corruption. Wako was instrumental in negotiating the agreement.

Pirates have also created domestic political headaches for the Kenyans. The pirate prison of Shimo La Tewa in Mombasa -- notorious for its extremely harsh detention conditions -- was extensively renovated under the pirate deal with the help of former German ambassador Walter Lindner. There is a new well in the prison and the cells of suspected pirates have been enlarged -- and that's precisely what is now causing trouble. Kenya complained to German diplomats that the Kenyan inmates felt like second-class prisoners because the Somalis were treated better.

Already by late March, the Kenyans demonstrated that they are serious about not taking in any more suspects. They have refused to accept alleged pirates from Italian and US warships. They recently even prevented the Italian frigate Scirocco from transferring the body of a drowned Somali.

Now the German government is worried that the 10 Somalis who are expected to arrive in Hamburg could be just the beginning. The pirates are gearing up for their new hunting season and experts agree that it's only a matter of time before they launch the next attack on a German cargo ship.

This is a nightmare scenario for many German ministries. Above and beyond their fears of an additional burden for the criminal justice system, they are primarily concerned about asylum applications from detained Somalis. It is practically impossible to deport individuals to the failed state of Somalia.

On his last visit to Africa, German Foreign Minister Guido Westerwelle already began to explore possible alternatives. During talks with his counterpart in the east African country of Tanzania, Westerwelle offered the impoverished country more development aid in exchange for accepting and legally prosecuting suspected pirates. He said that many of the attacked ships transport urgently needed food aid from the World Health Organization to Tanzania, and thus the country also benefits from the EU mission. But his Tanzanian colleague has declined the offer, at least for the time being.

The 10 Somalis detained in the helicopter hangar of the Tromp were individually informed en route that they would soon be extradited to Germany. After their arrival in the Netherlands, they were arraigned before an Amsterdam district court judge last Thursday. Acting on the advice of their four Dutch public defenders, all of them objected to their fast-track extradition to Germany, which will postpone their trip to Hamburg. According to Dutch law, a hearing must now take place within 90 days to decide on the extradition. In the meantime, the suspects will be held in a number of different prisons.

At the Hamburg-based Komrowski shipping company, managing director Roland Höger -- who personally inspected the damage to the MS Taipan during a visit to Dubai last week -- is looking into taking his own legal steps against the pirates. The shipping company is also examining whether the International Tribunal for the Law of the Sea -- and thus also the United Nations -- could be tasked with the issue. "The EU Atalanta mission has been far too passive," says Höger, "the mother ships of the pirates have been identified, and we urgently need a solution that prevents these vessels from sailing beyond Somali territorial waters."