Georg Doerken, 55, is an experienced man. Since 1994 he has spent a lot of time in eastern Congo. The program director of aid group German Agro Action (Deutsche Hungerhilfe) has been evacuated a dozen times and has helped others escape the country when things got rough there. Even when the situation seems calm his car is always parked so that he can make a speedy escape.

When he took off last weekend in his Toyota heading from Goma to the Rwandan border it was a close call. "I have never hit the road so fast with my car," he said, "That was super last minute." Refugees, Congolese Army tanks, soldiers in stolen private cars -- everyone was on the move. Doerken and his companion still reached the border unscathed.

In the provincial capital Goma, a city with a population of 500,000, there was fear that Tutsi General Laurent Nkunda was about to march in with his rebel army the National Congress for the Defense of the People (CNDP). The rebels were already on the outskirts of the city. He had gone on the offensive against the regular Congolese Army over the previous few weeks and the UN blue helmets of the MONUC (the UN Mission in the Democratic Republic of Congo) were doing nothing to hold him back. Nevertheless Nkunda called a halt to the advance at the gates of Goma last Wednesday.

"MONUC made a very bad impression," Doerken says. Once again the Blue Helmets were not capable of protecting the civilian population from displacement, plunder and rape. It is the UN's biggest and most expensive mission ever, but it has yet to have any significant successes. Disappointed Congolese promptly threw stones at the peacekeepers' vehicles and bases.

The peace agreement that Nkunda signed in Goma with the Congolese government is less than a year old. Within four months after it was reached, the deal was no longer worth the paper it was written on -- and plans to integrate Nkunda's people into the regular army were scrapped. The demand for Congo's vast mineral riches has fuelled the fighting for years, and hardliners on both sides have no real interest in reaching a deal.

Although the UN forces have heavier firepower than Nkunda, with helicopters and armored vehicles, they failed to stop the rebel leader. The hurried departure of the Spanish MONUC General Vicente Diaz de Villegas also created a bad impression. He arrived in Congo at the end of September and didn't even last four weeks in the country before quitting his post. According to the official line, he departed "for personal reasons." Unofficially, however, the word was that after a few days he had come to regard the MONUC mission as futile. He couldn't see a clear aim to the mission and he was said to have considered the Congolese government in Kinshasa as completely incompetent.

The timing of the resignation was unfortunate. For years the blue helmets in the Congo had been coming in for criticism -- not least from those they were supposed to be protecting. The MONUC soldiers were unable to ensure peace, and on several occasions they sought shelter in their tanks instead of protecting the population. And then there were the repeated reports that the UN soldiers had been involved with underaged girls or had been doing a roaring trade with the rebels.

The only group that has an even worse reputation is the regular Congolese Army, which in the past few weeks has also been responsible for much murder, looting and rapes in and around Goma. One of the key problems that the UN mission faces is that the expectations of both the Congolese population and the international community is at odds with the peacekeepers' own conception of their role. "We are here as peacekeepers. We should ensure the peace, not operate in a classical military way," Nepalese General Lok Bahadour Thapa said recently. He is responsible for the UN mission in the Ituri region further to the north.

"MONUC is not there for, nor is it equipped for, a military solution," says Francois Grignon of the International Crisis Group. "A political solution is required, which must then be enforced by MONUC." The UN has, however, failed as a peacemaker -- and its political capital in the Congo has been squandered. The UN special envoy to the country, Alan Doss, had not managed to get the big players -- the presidents of Congo and Rwanda -- to the negotiating table. In his desperation he called for more international troops. 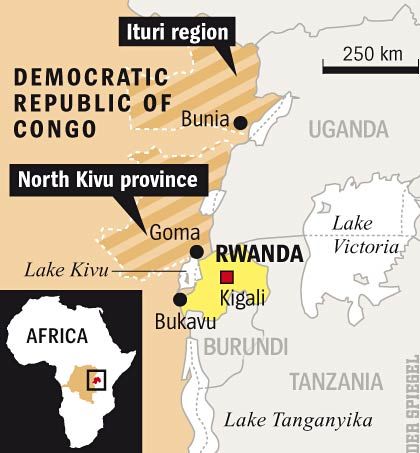 The combined efforts of the British and French foreign ministers, David Miliband and Bernhard Kouchner, European Union foreign policy chief Javier Solana and EU Development Commissioner Louis Michel, may have indeed created some breathing space, but little more. On Friday Michel announced that Congolese President Joseph Kabila and his Rwandan counterpart Paul Kagame had agreed to meet at a summit in the Kenyan capital Nairobi this week. However, Kinshasa is still refusing to hold talks with rebel leader Nkundu.

Nkundu continues to repeat his mantra that he just wants to protect the Tutsis in eastern Congo. He began his low-level insurgency in 2004 claiming the Tutsi ethnic minority was under threat from the Rwandan Hutu militia that had escaped after 1994 genocide. His true plans, however, remain a mystery. For four weeks he warned that he intended to march on Kinshasa, but now he has again stopped short of taking Goma, and instead is holding out a few kilometers outside the city.

His reputation also suffered lasting damage after his rebels overran Bukavu on the southern coast of Lake Kivu in 2003, plundering and raping their way through the town. Since then it seems that he has learned tactics and taught his people discipline.

An Escape Route to Rwanda

Last week he generously offered to create a humanitarian corridor to allow aid to get through to the hundreds of thousands of refugees who are trapped in the mountainous region around Goma. Initially the humanitarian operation ran into trouble, with the distribution of aid getting out of control due to scuffles, in other areas aid transports had to turn back because marauding troops made the route unsafe. In one of the camps reports of a cholera outbreak have been confirmed. However, things could be improving on the ground. On Monday a humanitarian convoy protected by UN peacekeepers made its way behind rebel lines to provide clinics there with medical supplies. The 12-vehicle convoy set off from Goma in the direction of Rutshuru, a village 88 kilometers (55 miles) to the north.

Despite the cease-fire, peace seems a long way off. Nkunda is too strong militarily to simply be ignored. The Rwandan government in Kigali claims that it has no influence over him, but that is strongly doubted by many. "As long as eastern Congo cannot be ruled from Kinshasa, it will remain difficult," says MONUC General Thapa. That however, is truer now than ever.

The international aid organizations, in the meantime, are trying to help while at the same time attempting to ensure their own safety. Everyone is trying to make sure that they have an escape route to the Rwandan border. German Agro Action is also planning on reducing its personnel over the next few days. Georg Doerken has taken the precaution of securing a small boat on the banks of Lake Kivu. That way if things deteriorate further the aid workers can get to safety across the water.