In the evening, as the sun slowly sets over the Mara River, the only sound heard in the Karen Blixen Camp on the edge of Kenya's most famous animal preserve, the Masai Mara, is the snorting of the hippopotamuses cavorting in the hippo pool. Impalas graze nearby and, once in a while, a majestic sea eagle descends from the skies. Life here seems unchanged.

But one thing is missing: human visitors.

Most of the 22 ruggedly picturesque tents are empty, making the Karen Blixen Camp an oasis of peace and quiet in almost every respect. And it is no exception. Travel agencies say that the occupancy rate for lodgings in the Masai Mara has plunged to between 2 percent and 5 percent at most. Like many other hotels, the nearby Mara Country Lodge has already closed its doors. Given the current conditions in Kenya, who would want to travel there anymore? A mere 50 kilometers (31 miles) north of the exclusive and tastefully designed lodge, Kisii warriors are sharpening their machetes while members of the Kalenjin ethnic group draw their bows and burn down houses.

The frightening news and images have long since reached Europe. "Kenya is headed for disaster," the German newspaper Die Zeit wrote on Jan. 31, 2008. The images of bloodthirsty adolescents from Eldoret and elsewhere continue to dominate the BBC's reporting on Kenya. "The machete, or panga, as the Kenyans refer to it, has become a common sight here," reporter Karen Allen, clearly shaken, reported from the Rift Valley.

'Kenya Is Drowning in Blood'

Her reaction is no exception. Almost all international journalists who venture out of their heavily guarded offices arrive at the same conclusion. Another German paper, the Frankfurter Allgemeine Zeitung, even sees conditions in Kenya approaching those in the Ivory Coast during that country's civil war. "The parallels between the fighting in Kenya and the riots that led to civil war in the Ivory Coast are alarming," writes the paper's Africa correspondent, Thomas Scheen, who persevered for many years in the Ivorian capital Abidjan during the violence there. "War has broken out in western Kenya," wrote the Swiss daily Neue Zürcher Zeitung, while the German magazine Stern reported: "Kenya is drowning in blood." 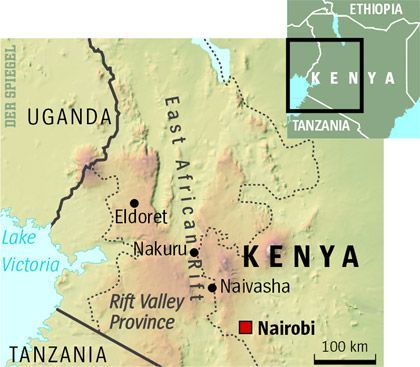 Even the United Nations Security Council, which is also currently dealing with problems in Afghanistan, Somalia and Iraq, has expressed concern about the killings and called upon the parties involved to make peace. According to the UN, there is "widespread violence" in Kenya, where "civilians continue to be killed, subjected to sexual and gender-based violence and displaced from their homes." All efforts by former UN Secretary-General Kofi Annanto mediate in the crisis have been unsuccessful.

It has become a bitter truth that Kenya -- which many had believed to be relatively stable, despite its frighteningly high crime rates (the capital has long been known as "Nairobbery") -- is lurching dangerously close to disaster. But to believe that Kenya's stability could last forever is, at best, naïve. With the exception of Tanzania, in recent years, almost all East African nations have been plagued by civil wars and genocide.

John Christensen knew what he was getting into when he decided to try his luck in Kenya. He visited Kenya for the first time in 1993 and fell in love with the country almost immediately. Christensen, a Danish citizen, is one of the owners of the Karen Blixen Camp, which only opened two years ago.

Of course, Christensen invested a considerable amount of money in the project. To avoid having to use a stinking diesel generator in the wilderness, he installed an expensive solar system. And it now looks like he'll lose much of it. He has received cancellations for reservations worth a total of $700,000 (€480,000) for the months of January through March alone. "It's sad," says Christensen, "but we must acknowledge the reality. It's pointless to stick your head in the sand and pretend that horrible things aren't happening here at the moment."

Christensen is especially appalled by the complaints of some of his colleagues who live in Kenya and trivialize the disaster. "Even I can understand how many tourists would now prefer to go to the Ngorongoro Crater in Tanzania or to South Africa," Christensen says. "It just happens to be the case that tourists have many alternatives and prefer to go where conditions are relatively normal."

It's time for the country to solve its problems, says Christensen, although he warns that foolishly praying for things to get better is the least helpful thing to do. For Christensen, it is nothing less than cynical for people to declare the current state of violence and abuse of power to be normal, as if human rights were not universal.

The Death of an Economy 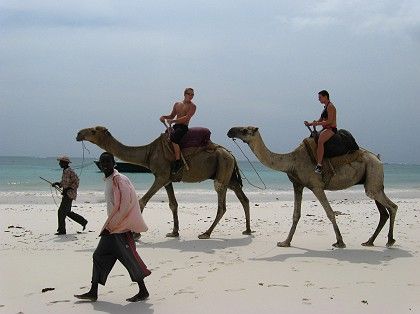 Tourists ride camels on a deserted beach at a tourist resort near the Kenyan coastal city of Mombasa in Jan. 2007. Kenya has seen up to $1 billion in tourism-related losses linked to the bloody turmoil engulfing the country.

The fraudulent vote that brought President Mwai Kibaki into power has caused a lot of damage. This is all the more disturbing in a country that experienced a record year for tourism in 2007, with revenues of about €650 million ($948 million)and 15.4 percent growth compared with 2006. Last year, more than a million people visited this country of safaris.

But now the economy throughout Kenya is deteriorating at breakneck speed. "Don't expect that the lives of the people in whose name murder and arson are being committed will change for the better," writes Kenyan author Meja Mwangi. He knows that what the Kenyan newspaper Daily Nation called the country's "economic disaster" has only just begun.

The violence has displaced 300,000 people who left their homes out of the justified fear of being massacred by members of other ethnic groups. Their fields are no longer being tended, and their shops are shuttered. Flower plantations in Naivasha, a city in Kenya's Rift Valley province, have been destroyed. Coffee pickers from the Luoland region in the country's west refuse to go to work on Mount Kenya, while vendors from the Central Province no longer dare to go to Kisumu, a port city in western Kenya.

Sheer Terror in All Directions

The notion that the government still controls much of its sovereign territory is probably little more than propaganda coming from the barricaded Statehouse into which President Kibaki has retreated in an act which has earned him the derogatory title of "General Coward" from Britain's Observer. Parts of the Rift Valley have been in a state of chaos for some time, as has Nyanza, the political opposition's stronghold in the west. Sheer terror has descended on Nairobi's slums.

Criminal gangs have always been able to operate largely unchecked by the police in the country's north, toward the Sudanese and Ethiopian borders, as well as along the Somali border in the northeast.

But the country's chaos has spread, with ethnic Luos now being driven out of Kenya's Central Province. It is still relatively quiet in the region around Kakamega in western Kenya, which is predominantly inhabited by members of the Luhya tribe. But some areas of the country are almost peaceful, including the national parks, the tourist areas along the coast where many of the white expatriates live, and a few affluent sections of Nairobi.

Investors will think twice before trying their luck again in a country inundated in what the Guardian calls "a wave of anarchy" and where, according to the New York Times, "revenge rules" in the cities. Christensen has also thought about dismantling his tents in Kenya and building a new camp in the Serengeti, but the high cost of obtaining a license there will most likely prevent him from making the move.

For now, Christensen is laying off his employees in Kenya, and he soon plans to cut his staff from 63 to only 23. After that, all he can do is hope.