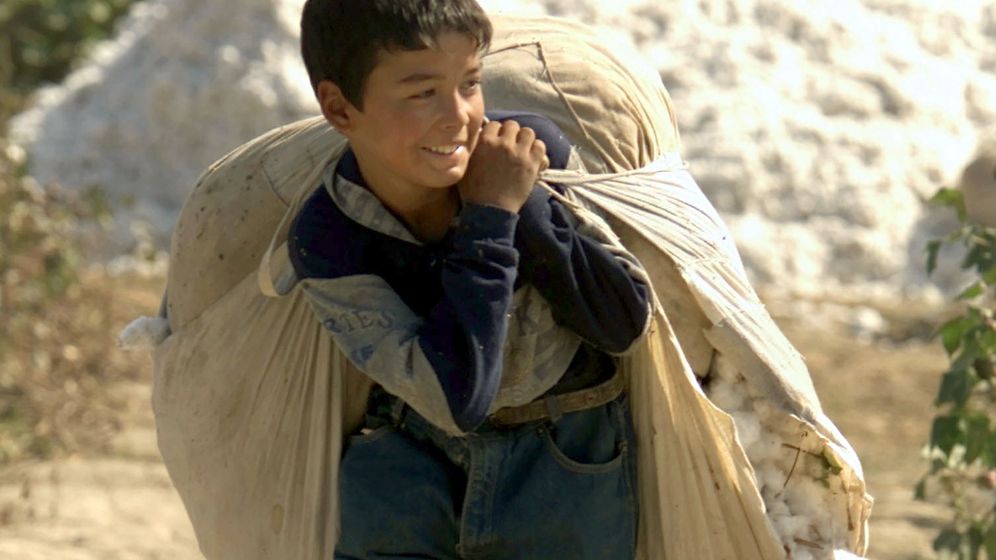 In Uzbekistan, summer vacation begins in mid-September, when the heat subsides. It lasts about two months, but many schoolchildren hardly even see their parents during this time. Instead they are required to serve their country by picking cotton.

An obscure ritual dating back to the former Soviet command economy unfolds during the autumn harvest season in the Central Asian republic, when President Islam Karimov mobilizes the masses. About 2 million schoolchildren are then ordered to work in the fields and harvest the "white gold," as cotton has been known since the days of Soviet dictator Joseph Stalin. In addition to natural gas and gold, cotton is one of the most important sources of hard currency for the Uzbek elite. The price of cotton is currently at its highest since trading began 140 years ago.

Not that the young cotton pickers see much of those profits. Nazira was just 11 when she worked in the fields last year. For an entire month, she, her teachers and the other children from her class in a village near Andijan in eastern Uzbekistan would start picking at 7 a.m. and worked until the early evening hours.

The children were told to meet their quota of 10 kilograms per day. "I was barely able to pick three kilos," Nazira reports. She was paid 60 sums per kilo (3 euro cents). After a month's work, she gave the money to her mother. "She used it to buy me a winter cap, but it wasn't enough, so she had to pay a little extra herself."

Beaten For Not Reaching Quotas

The slightly older schoolchildren who were sent out to work in the area were even worse off. Their teachers simply kept some of the children's monthly wages. Those who didn't make their quotas were also beaten. The few parents who objected to the forced recruitment of their children found themselves being harassed by teachers visiting their homes.

In October 2008, Umida Donisheva, a 17-year-old girl, hung herself from a tree on the edge of a cotton field. According to the brief report on an Uzbek Internet news site, Umida had been unable to handle the pressure coming from her teachers to pick more and more cotton.

According to Joanna Ewart-James of Anti-Slavery International, what is happening in Uzbekistan is nothing short of "child slavery." Although Uzbekistan has since signed the United Nations convention against the worst forms of slavery and denies any wrongdoing, little has changed for children in rural areas, says Ewart-James.

The activist recently attended international cotton conferences in Texas and Liverpool. Representatives of major dealers like US-based Cargill, Inc., the Swiss Reinhart Group and the Bremen-based company Otto Stadtlander were there, but Ewart-James claims she was ridiculed when she tried to address issue of child labor.

The sunny mood in the industry could be somewhat dampened this week. A complaint has been filed against seven European cotton dealers with the Organization for Economic Cooperation and Development (OECD). According to the charge, the companies violated OECD principles for multinational companies by profiting from Uzbek child labor.

In Germany, the European Center for Constitutional and Human Rights (ECCHR) is filing a complaint against Stadtlander, a large European cotton dealer with over €100 million ($138 million) in annual sales. For years, the company has had an office in Tashkent, where it maintains good relations with the Karimov government.

Although the ECCHR is still a relatively young organization, it has already scored a victory against Lidl, the discount supermarket chain, which had claimed in its ads that its products were being produced under fair working conditions. Stadtlander aids and abets human rights violations, says ECCHR coordinator Miriam Saage-Maass, but she notes that it's a challenging case.

Unlike Lidl, the Bremen-based company has not made any claims about the fair treatment of workers in its advertising. Aside from embarrassing questions, Stadtlander has little to fear at the moment. Moreover, the OECD guidelines are full of target regulations, or what Saage-Maass, who is also an attorney, calls toothless "soft law." Although the World Trade Organization's international trade law includes provisions on discrimination, they only apply to products and the unobstructed movement of goods. The conditions under which products are made are not critical for the free trade watchdogs.

The complaint is also intended to expose an absurd legal loophole, namely that companies that profit from human rights violations are legally almost untouchable. It would be helpful if the OECD guidelines included sanctions, such as the suspension of economic aid. But Saage-Maass sees little evidence of interest at most OECD contact offices in individual countries. "They are often too ineffective," she says. The management of Otto Stadtlander has ignored the ECCHR's inquiries for more than a year now, Saage-Maass adds. The company was unwilling to answer SPIEGEL's questions.

Stadtlander's good relationship with Uzbekistan is entirely in line with the German government's policies. A "new partnership" connects Germany to President Karimov, and German soldiers embark for Afghanistan from a German military base in Uzbekistan.

Karimov, a former communist official, converted to capitalism without abandoning his Stalinist attitudes. He is reelected at irregular intervals with an absurdly large majority of votes. Even opposition candidates have admitted to voting for him. Regime critics in his country have allegedly been immersed in boiling water. The government also fired on its own people, as it did in Andijan in 2005, when more than 700 members of the opposition were reportedly killed.

This prompted many European countries to call for sanctions, but Germany didn't play along. Instead, German cabinet ministers paid visits to the country with large business delegations in tow.

The German government is unwilling to say how the partnership improved conditions for the children, but a spokeswoman mentions a "monitoring system" and "regular dialogue."

German banks also profit from the cotton trade. One of them is the partially state-owned Commerzbank, which has an office in Tashkent. The bank has been involved in the financing of cotton deals for European customers in Uzbekistan "for years," says a spokesman. Deutsche Bank also finances Uzbekistan deals.

Retailers like C&A and Wal-Mart are now attempting to not stock clothing that contains cotton from Uzbekistan. But it is difficult to trace the path of Uzbek cotton, which dealers mix with cotton from other countries.

Despite its abundant natural resources, Uzbekistan's people are as poor as ever. Farms are operated inefficiently with outdated equipment. In Sheikh Lar, a village northwest of the city of Samarkand, the kinds of harvesters that were used in the Soviet era are no longer to be seen. Although the farmers are officially free operators, they lease their land from the government, buy fertilizer from state-owned companies and are required to meet their quotas. They are paid one third of the export price, while the Karimov government collects the rest.

Cotton farming is also immensely harmful to the environment. Irrigation for cotton farms is the main reason the Aral Sea in western Uzbekistan has shrunk to only one tenth of its former size. The 24 species of fish once found in the lake are now extinct. Unemployment in the region is now at 70 percent.

Umida Niyasova, a human rights activist from Uzbekistan who has been locked up in Karimov's dungeons before, now documents the situation in her country from Berlin. She receives reports of workplace accidents and unspeakable hygienic conditions in the camps near the fields. The father of a girl who was forced to pick cotton in the southwestern Jisak region has just contacted her. "The police had the parents there under surveillance for hours before they were allowed to see their children," says Niyasova.

Stadtlander paints a different picture of Uzbekistan. In recent years the company sponsored a celebration of the Uzbek spring festival at the Bremen Cotton Exchange. Plov, an Uzbek stew, was served and Uzbek dancers in glittering dresses performed, while large posters depicted Islam Karimov's vision of the cities of the future.

It could have been a TV show broadcast straight from Uzbekistan.