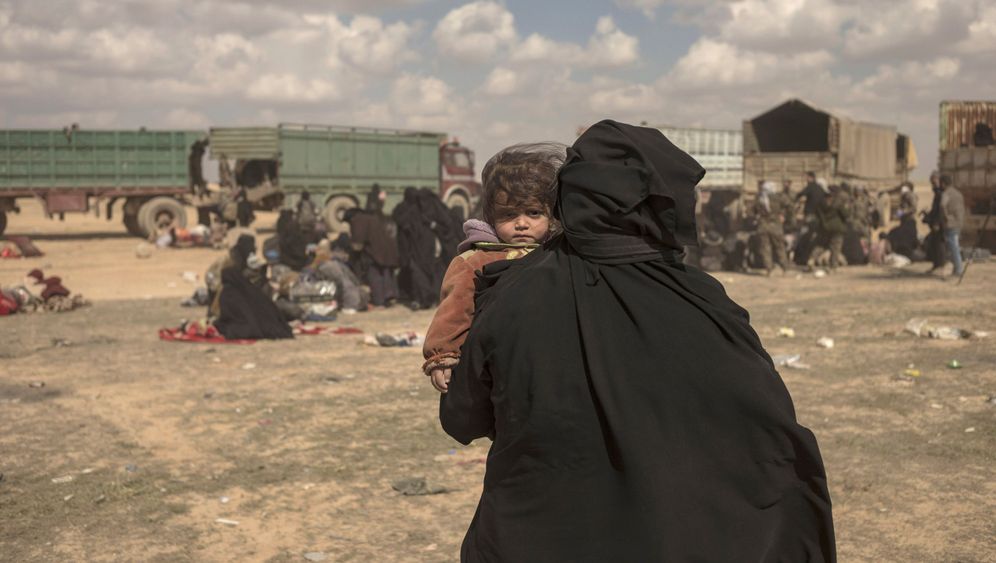 Photo Gallery: Children of the Caliphate

A three-month old baby shouldn't look like this. It shouldn't be a tiny, motionless bundle with feeble, wrinkled skin stretched over its bones. It shouldn't have to be kept alive with a feeding tube and intravenous fluids in an incubator.

The baby's name is Saifullah, or "Sword of God," and that is almost all the nurse knows about it. At least it survived the first three days, says the doctor. Statistically speaking, that is cause for optimism. For the 20 to 30 children and infants that arrive each day at this hospital in the Kurdish-controlled city of Al-Hasakah, Syria, the biggest danger is that they'll be "dead on arrival." The name of the hospital cannot be disclosed due to safety concerns. The same goes for the name of the doctor.

This is where the weakest and most innocent members of Islamic State are taken -- the sick children of the caliphate. The adults who remain loyal to the group were locked for months in a game of cat-and-mouse with Kurdish-commanded militias around their last remaining refuge in the eastern Syrian village of Baghouz. The vast territory once under control of IS -- which at one point covered roughly the same area as Jordan -- is now gone, the last of the extremist fighters having been dislodged over the weekend.

In the chaotic final days, thousands of civilians and injured IS fighters were allowed to surrender, with the men ending behind bars. Almost all of the women and children, though, ended up in the Al Hawl refugee camp. Jammed with 70,000 occupants, the camp is completely overcrowded and there is only two small clinics.

It's not only the survival of the malnourished baby Saifullah that's hanging in the balance. It's also entirely unclear who can be saved and by whom. The Kurdish region in the northeast is de facto independent at the moment, but it's not a state, which is why the various UN aid organizations aren't quite sure what they're allowed to do. In light of this uncertainty, they have reached an agreement directly with the hospital.

"They help us with medication, fortified milk formula, salaries," the doctor says, but all of it goes on unofficially, he adds. At the same time, though, he says, the situation in the camp has become so dramatic that help from the international community is urgently needed. "More people just keep coming. We can't do this on our own."

Nearly every day last week, hundreds of IS followers arrived at the camp, on some days it was more than a thousand. Many of the children were massively malnourished and traumatized. Some of them were injured, and others were suffering from diseases that the team of doctors at the hospital in Al-Hasakah hadn't seen in decades. "Tuberculosis, especially among children, used to no longer exist here. Scabies and leishmaniasis" -- an infectious disease transmitted by sand flies -- "were also very rare."

But among the children of Baghouz, who spent nearly their entire winter in holes in the ground or in makeshift shelters, the doctors have found an array of diseases. On top of that, many of them are completely emaciated, have lice or suffer from pneumonia. Not to mention the rather muddled familial constellations of Islamic State. Many of the girls got pregnant when they were only 15 or 16 and were overwhelmed with having to raise children of their own, while some mothers died in the bombings or fathers were killed at the front. The children were passed from one person to another.

The children bear obvious traces of neglect: Their heads are shorn, their scalps covered in scabs. Their limbs are scrawny and when they talk, what comes out is seldom more than a faint squeak.

The most dramatic cases end up in six of the hospital's eight incubators reserved for children from the camp. The others are kept in several large rooms that have been hastily erected on the hospital's roof. Thirty-two children share a single room -- and their features reflect the international diversity of the IS following. Children with African roots lie next to a blonde girl from Sweden. Some have Asian features, others European.

But they all have one thing in common: They are innocent of their fate and had nothing to do with their parents' decision to flock to IS from all over the world -- to adhere to an ideology that holds that women are little more than birthing machines, put on Earth to create more subjects.

Some children lie so still in their beds that you have to look closely to notice the slight rise and fall of their chests confirming that they are still alive. Others, such as the emaciated 2-year-old Sara with her dark skin and bald head, hold themselves upright with all their strength. As her thin hand clutches the nurse's fingers, she spoons a buttery protein mixture into her mouth, reaches for the water bottle and drinks greedily. She looks at everyone around her as if trying to say: "I will not starve! I will live!"

In order to give the starving children who arrive at the hospital a chance at survival, they must be given a special milk mixture, one that is fortified with vitamins and nutrients specially designed for emaciated children. First comes the variant F-75, then F-100, then a semi-solid protein butter. "We had to train the nurses," the doctor says. "We had never seen anything like this before."

Those who make it to the hospital alive have a fairly good chance of surviving. But the problem is getting there. The mothers and children who were able to escape Baghouz with their lives are driven for several hours in open trucks to the Al-Hawl camp. Members of the Kurdish Red Crescent then bring the most acute cases via collective transport to Al-Hasakah, another hour-and-a-half drive away. Many of the little patients do not survive the odyssey, the doctor says.

According to the International Rescue Committee, which helps supply the Al Hawl camp, 108 children thus far in March alone were either dead when they arrived or died shortly thereafter. The hospital in Al-Hasakah counted at least one case a day in March of a child being DOA.

Luckily it's not too difficult to convince the mothers to leave their children in the hospital on their own. "Most of them have three or four more children to look after in the camp. We would have no room for them and it would also be a security risk. We are not a military hospital." The little ones don't stay that long, anyway. "Once we've stabilized them after two or three weeks, they're released back to their mothers in the camp."

The mothers are only allowed to come and stay in one of the rare single rooms if their child is seriously ill. This was the case with a German woman who had traveled to Syria to join IS whose 5-month-old daughter, Sofia, was suffering from hydrocephalus, a condition in which fluid builds up in the brain. Sofia underwent surgery a few days ago in Al-Hasakah, but it was an ordeal getting her there. Her mother complained that for weeks, she had spent hours at a time waiting at the gate of the area within the camp cordoned off for foreign IS women, asking for help for her daughter, who was growing more apathetic and vomiting frequently. Only when foreign reporters informed the camp management about the little girl's plight and published a video of her was she taken to the hospital.

The doctor wasn't surprised to hear the story. "There are simply too many people, too many sick people who have come from this last IS area. No one expected tens of thousands." Currently, he says, one of the most acute problems in the camp is triage, the assessment of who needs medical help and how urgently. An additional problem is presented by his duty of caring for normal patients in Al-Hasakah, a city that was largely spared by the war but is nevertheless impoverished. "Parents come with their sick child and we don't have room. Plus, normal patients have to pay. What am I supposed to tell a poor farmer who comes in with his sick child but receives no treatment, while the UN is paying for the malnourished infant of a Tunisian terrorist family?"

He sighs. The international community urgently needs to build a proper hospital in the IS prisoners' camp. Yet nothing happens, even though it's been obvious to everyone for months just how dire the situation is. Everyone was concentrated on the war against IS and on locking up the fighters.

But no one considered the thousands of children who were born in the last four or five years and now either have no parents or whose parents are sitting in prisons or internment camps. "At the moment, we're taking care of the little ones as best we can," the doctor says. "But after two or three weeks, they have to leave. Otherwise we would have no room."