The bad news came at a quarter to eight on Thursday morning. I had just woken up in the hotel when the phone started ringing. “We have a problem,” said my colleague, Wu Dandan, who works in Beijing’s DER SPIEGEL office and had accompanied me to Wuhan. “The authorities are shutting down the city. Nobody will be allowed out after 10 a.m.”

That sort of news has a way of waking you up pretty quickly. Wuhan, a city of 11 million people, is considered to be where the new coronavirus originated. Most infections and deaths have been registered here, and the numbers keep rising. The virus is thought to have an incubation period of up to 12 days. If we don’t get out, I thought, we’ll be stuck at ground zero of the outbreak for days, perhaps even weeks. In quarantine.

We had arrived on Wednesday from Beijing to take a first-hand look at the situation in Wuhan’s hospitals, in the market, at the train station and at the airport. Because even as the virus was spreading here, hundreds of millions of people across China were preparing to celebrate Lunar New Year with their families. The event would set off a wave of travelers similar to the one at Christmas in Europe. And Wuhan is one of the country’s travel hubs. What happens to a city when it is forced to prepare for an epidemic – and maybe even catastrophe?

The taxi driver who met us at the airport was in a good mood, happy for the fare. He said he had been waiting three hours for a passenger, twice as long as normal. Few travelers were coming to Wuhan, he said. On the highway, we drove several kilometers without seeing another vehicle. Many Wuhan residents, he said, come from the countryside, and had returned to their villages to mark the new year. When we reached the city, the traffic volume increased.

It was cold, with drizzling rain and a temperature of 7 degrees Celsius. According to my phone’s smog app, the air quality, displayed in red, was “unhealthy.” Nevertheless, the driver left the window cracked open to get some fresh air -- company policy. He believed that more people are infected than is known to the public, and that there have been more deaths as well. He said the government surely hadn't been completely open. “That happens when you have a one-party system.”

Like most people in the city, we were wearing large medical masks covering our mouths and noses. That was the virus’ first minor victory: robbing Wuhan inhabitants of their faces. The rubber straps dug into our ears and our skin grew clammy under the fabric. Still, we only took our masks off to eat. When we touched a door handle, we would immediately cleanse our hands with disinfectant. And during the entirety of those 24 hours, we didn't shake anyone's hand. It was the virus’ second small victory: isolating people, making us paranoid. 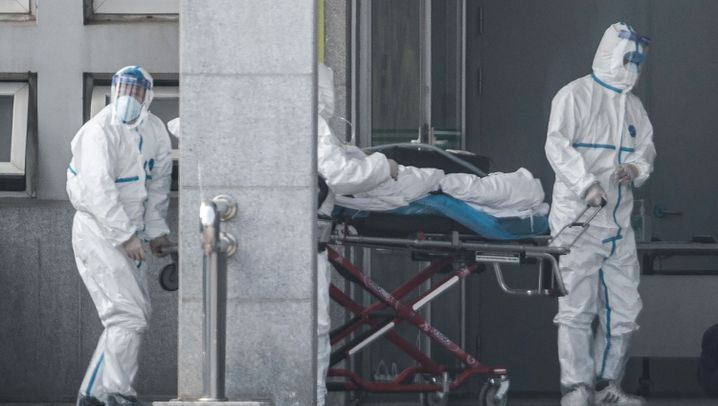 Our attempts to contact hospital doctors and virologists in the city failed. We had heard that the government had banned them from speaking to the press in order to maintain control over communication about the crisis. So, we went to the university clinic. In the hallways of Building 1, which houses the department of infectious diseases, there were a handful of patients, but many of the benches remained empty.

There was more going on in the admissions area for patients suffering from fever. Two dozen men and women were crowding in the lobby. Nurses in protective suits, with plastic shields in front of their faces, took down people’s information. A 40-year-old accompanying his friend told us that everything was happening in a speedy and orderly fashion, adding that they had arrived half-an-hour earlier and that his friend’s blood had already been taken.

We also went to the Hankou train station to have a look at the situation there. The first woman we spoke to was a nurse-in-training. She said she was doing an internship in the municipal lung clinic and told us she was at the station to change her ticket so she could go home today instead of tomorrow. The situation in the hospital where she worked was tense, she said, with too many people sick with the virus and too few beds. Her advice: “Don’t stay too long.”

The only place in the city that was truly empty was the large Huanan Market, where just a short time before, shoppers could buy fish, crabs, chickens and other animals. The market is the epidemic’s epicenter, with the first people infected with the virus coming from the area around the market -- residents and wildlife handlers. It was allegedly also possible to buy wolf puppies, snakes and civet cats here, but the stalls had lain empty behind grates and shutters for weeks. The sidewalks in front of the market are empty.

It is not so easy to describe the atmosphere hovering over the city. There was a nervousness in the air, but we also saw people without facemasks. The traffic wasn’t as dense as one would expect this time of year, but the city wasn’t at a standstill either. It was as if the city was in a state of limbo. As if the people were bracing for impact.

The authorities announced at two in the morning on Thursday -- while the city, including us, were sleeping – that Wuhan would be cordoned off. In the morning, we had to make a decision. Should we try to get out by car? But even if we managed to get out of the city in time, would we be allowed to continue driving with a Wuhan license plate? We decided to head to the airport, even though we had no tickets. All planes leaving Wuhan before 10 a.m. were full. Slowly, our fear of being locked in with 11 million people, many of whom carried the virus, grew.

After 15 minutes, we managed to stop a taxi. The driver didn’t turn on the meter, instead demanding 200 yuan, or about 26 euros -- twice as much as we had paid for the same journey the day before. When we arrived at the airport, a column of black police vehicles was parked in front of the departure terminal with their blue lights flashing. The government, it seemed, would not tolerate any trouble raised by passengers that had been rejected from flights.

The departure board showed a lot of red, with most of the flights having been cancelled. Dandan directed me to the Xiamen Air check-in desk. While walking, she bought two tickets on her smartphone for the 11:05 flight to Xining, the capital of Qinghai province, in the west of the country. Flights to Beijing were no longer taking off. The employee gave us two boarding passes and told us we could exchange them if the plane was grounded.

We ended up making it to our seats. The plane was most likely one of the last to leave Wuhan that day. We managed to escape the cordon. One hour after lockdown. 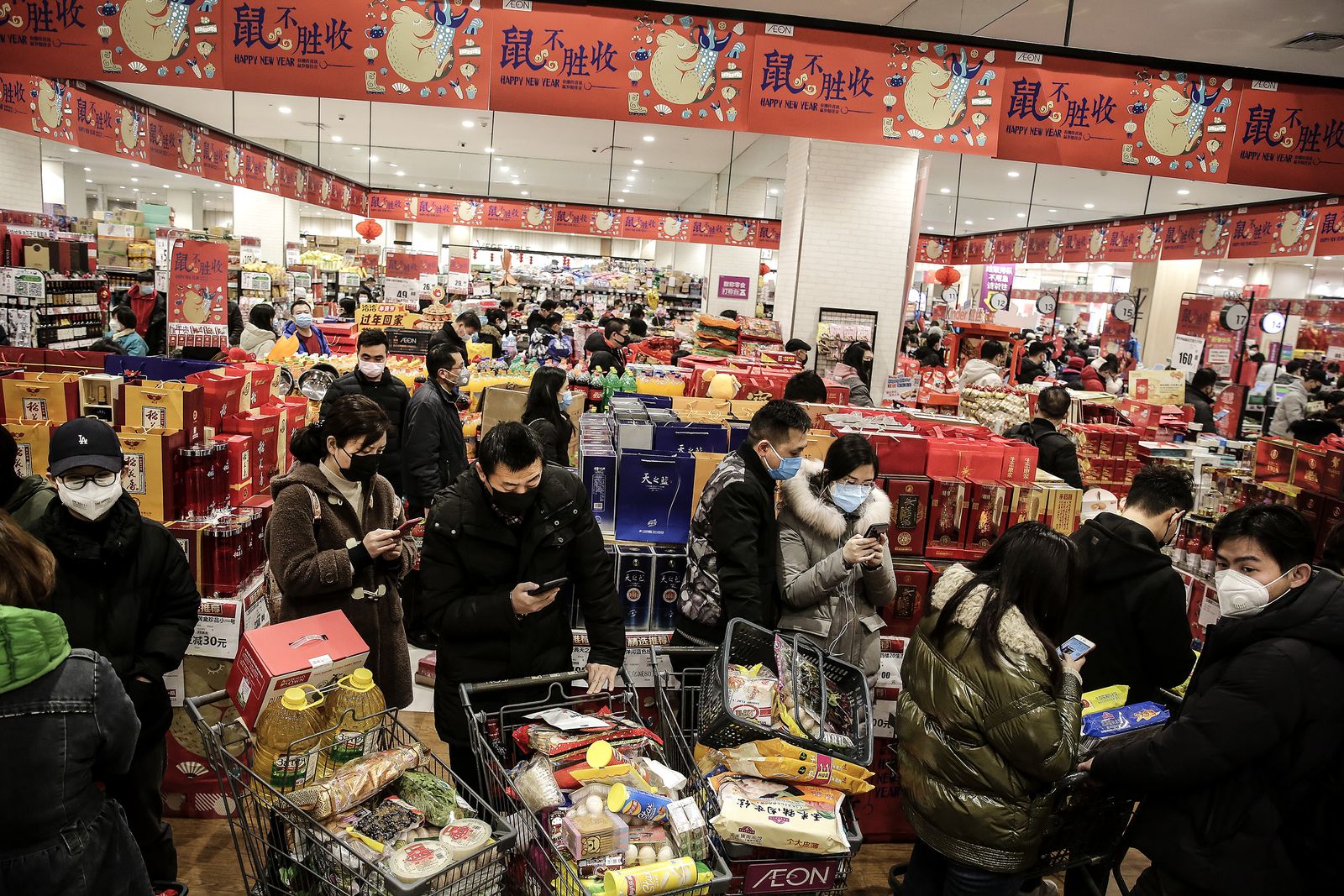 Customers in a Wuhan market wearing facemasks to protect themselves against the coronavirus.