Beijing is full of contradictions these days. On the five highways that encircle the city, traffic piles up in the mornings and evenings, but during the day, many roads are so empty that motorcyclists and sports car drivers can comfortably drag race.

Elegantly dressed couples stroll through the leisure and shopping districts, though people still sit far away from one another at the cafes and restaurants. Often there's only one guest per table. Families enjoy picnics at the foot of the mountains that abut the city, but before letting their children run around, parents tighten the elastic straps of their breathing masks.

The city feels as if it's waking up from hibernation but isn't really sure whether it's ready.

Three months after the coronavirus outbreak, every segment of Chinese society is pushing for a return to normality: people, businesses, the Communist Party. The travel restrictions that had been in place in Hubei province since January were lifted mid-week. Officially, there have been almost no new cases of illness there for days. Wuhan, the provincial capital and Ground Zero of the epidemic, is expected to follow suit on April 8.

But the jubilant images from Hubei have been accompanied by warnings of a second wave of infections. The coronavirus task force led by Prime Minister Li Keqiang has said the situation "remains complex" and has urged party cadres to be cautious. Sometimes it seems as if the highest-ranking officials don't even trust their own numbers.

Last Wednesday evening, the first high-speed trains with around 900 workers from Hubei arrived at the Beijing West train station. Each of them had to go through rigorous testing. They had to prove they had both a job and residency in Beijing. And they all must remain in quarantine for two weeks. Meanwhile, international flights to Beijing are being rerouted to other cities.

Anyone arriving from abroad is tested for the coronavirus and must also self-isolate for 14 days. As of March 21, almost all foreigners with valid visas won't be allowed to enter the country at all until further notice. Chinese authorities have registered more than 500 "imported" cases in recent days, most of them in the capital city. "Beijing has become the main battlefield for the prevention and control of the novel coronavirus," says the deputy director of surveillance at the Civil Aviation Administration of China.

At the same time, tourists are once again allowed to climb certain sections of the Great Wall, and one factory after another is reopening in Beijing. For days now, a rumor has been circulating that the annual meeting of the National People's Congress, which was cancelled back in February, is going to be rescheduled for the end of April.

Where is the leadership getting its confidence to gradually reopen the country and stimulate the economy, thus sending a signal of hope to all the other countries around the world that are now grappling with the coronavirus? How sustainable are China's hard-won successes in its "people's war" against the virus?

"At the beginning of January, the system in Wuhan collapsed," says Victor Gao, a political scientist who worked as an English translator for the late reformist politician Deng Xiaoping, who died in 1997, and is now vice president of a think tank with close ties to the government. "Hospitals, doctors, nurses and caregivers were overwhelmed. Many things should have been handled better at the time."

Power to the People

After the Wuhan disaster, the leadership successfully mobilized the country's massive administrative apparatus against the virus, Gao says -- "the whole pyramid, from the central government, through the provinces, districts, cities and villages, down to the last alleyway." The neighborhood committees, which were once established by the party for "ideological control" and are now playing an entirely different role, have proven to be particularly effective.

"There are now grandfathers and grandmothers standing outside the east gate of my housing complex who suddenly carry the full authority of the government," Gao reports. These party cadres, once derided, now keep meticulous records of who comes and goes and are not to be messed with. "They're under great pressure themselves. If there's a new cluster of infections in their area of jurisdiction, they will be questioned, and they know: Heads will roll. I'm afraid this system will be with us until at least the end of the year."

But the party isn't relying only on its cadres. It has also tightened its net of digital surveillance. Almost everyone in China now pays for things with their mobile phones. Programs have been installed on the payment platforms that assign codes to users based on their health data and movement: green, yellow or red, depending on their health status.

Millions of people have registered on the apps. Many were required to do so, like the workers returning to the big cities on the big coastal cities from inland provinces like Hubei. But many have also done so voluntarily, since a green code is often required to pass police checks and enter supermarkets and railway stations.

Are these measures sufficient to suppress the emergence of new infection clusters? Some doubts remain. Last week, the Beijing-based magazine Caixin reported that in Wuhan alone, dozens of people were testing positive for the virus every day, but weren't being included in the statistics because they didn't have any symptoms.

The South China Morning Post obtained government documents revealing that there had been around 43,000 patients as of late February who had tested positive for the virus but had been classified as "asymptomatic" and had not been included in the statistics. The government, for its part, initially insisted these patients were registered in health databases, sent into quarantine and were therefore on the authorities' radar. On Tuesday, Beijing announced that it will include asymptomatic cases in its daily figures to address public safety concerns.

Questions still remain. But China's successes in combating the virus are undeniable.

"We have now reached the point," says Victor Gao, "where we have beds waiting for patients -- not the other way around, like it was two months ago." The combination of analog and digital controls, widespread testing and the massive upgrading of hospitals, he expects, will interrupt chains of infection early and prevent a "second wave" from hitting.

The lockdown in the Hubei province lasted 8 weeks. In Wuhan, it will be a total of 10 weeks.

There is no proof that this is true, of course, but there are strong political indications that the party leadership believes it is. On March 10, Chinese President Xi Jinping visited Wuhan and linked his political fate to overcoming the coronavirus crisis. It can't be ruled out entirely, but within China's political system it is unlikely that the president would have embarked on this journey if he didn't consider the crisis to be fundamentally solvable. He chose his words carefully enough: "We have achieved important interim results," he said. What the country now faced would still be "arduous and difficult."

The United States-based China critic Minxin Pei once wrote that the power of the Communist Party rests on four pillars: robust growth, sophisticated repression, state-sponsored nationalism and the co-opting of the social elites. Two of these four pillars of power are directly linked to China's economic performance. The pressure on the country's leaders to get companies up and running again is enormous.

Some of the latest economic data is disastrous. Most experts expect the world's second-largest economy to shrink in the first quarter of 2020. It would be the first time in more than 40 years of uninterrupted growth. Millions of small and medium-sized businesses have been especially hard hit: shops, restaurants and cafes whose owners usually don't save up more money than what they need for two or three months. Companies like these account for a large proportion of jobs in China. And unlike many Western economies, the country now faces a problem with which it has relatively little experience: unemployment.

At the same time, exports collapsed -- even before the virus wave hit China's most important trading partners, first in Europe and then in the U.S. Entrepreneurs whose factories have slowly ramped up production in recent weeks are worried that they won't be able to move their inventory. A "second wave" has already begun to clearly emerge in the economy.

When it comes to propping up the economy with billions in aid, a measure that was passed in Washington last week, Beijing is still hesitant. The reasons for its restraint are unclear at the moment. Perhaps the party leadership wants to prevent an uncontrolled run on the banks. Or maybe it's counting on an internationally coordinated approach.

But while it may be holding back on financial measures, it is charging ahead on the foreign policy front. Xi has spoken with several of his Western counterparts in recent days, including German Chancellor Angela Merkel and U.S. President Donald Trump. He has promised that China would help nearly all of them. The country that had hit rock bottom eight weeks ago is now producing more than a hundred million face masks every day. That's 10 times more than before the crisis.

Leaders are being carried by a wave of patriotism bordering on chauvinism, which seems to be a result of the fears and anxiety that have been compounding for weeks. Shrill voices critical of Western countries aren't just limited to social media -- they also come from the highest ranks of China's Foreign Ministry.

A tweet from the ministry's deputy spokesman, Zhao Lijian, which purported that the coronavirus had been carried into Wuhan by U.S. military athletes, however, went too far even for other Chinese diplomats. Beijing's ambassador in Washington became the first one to respond critically and put Zhao in his place, albeit without mentioning his name. But the indignation seems to have spread further. Victor Gao, who represents the consensus of the moderate Beijing establishment, says: "Such statements are inappropriate for a spokesman of the Foreign Ministry." 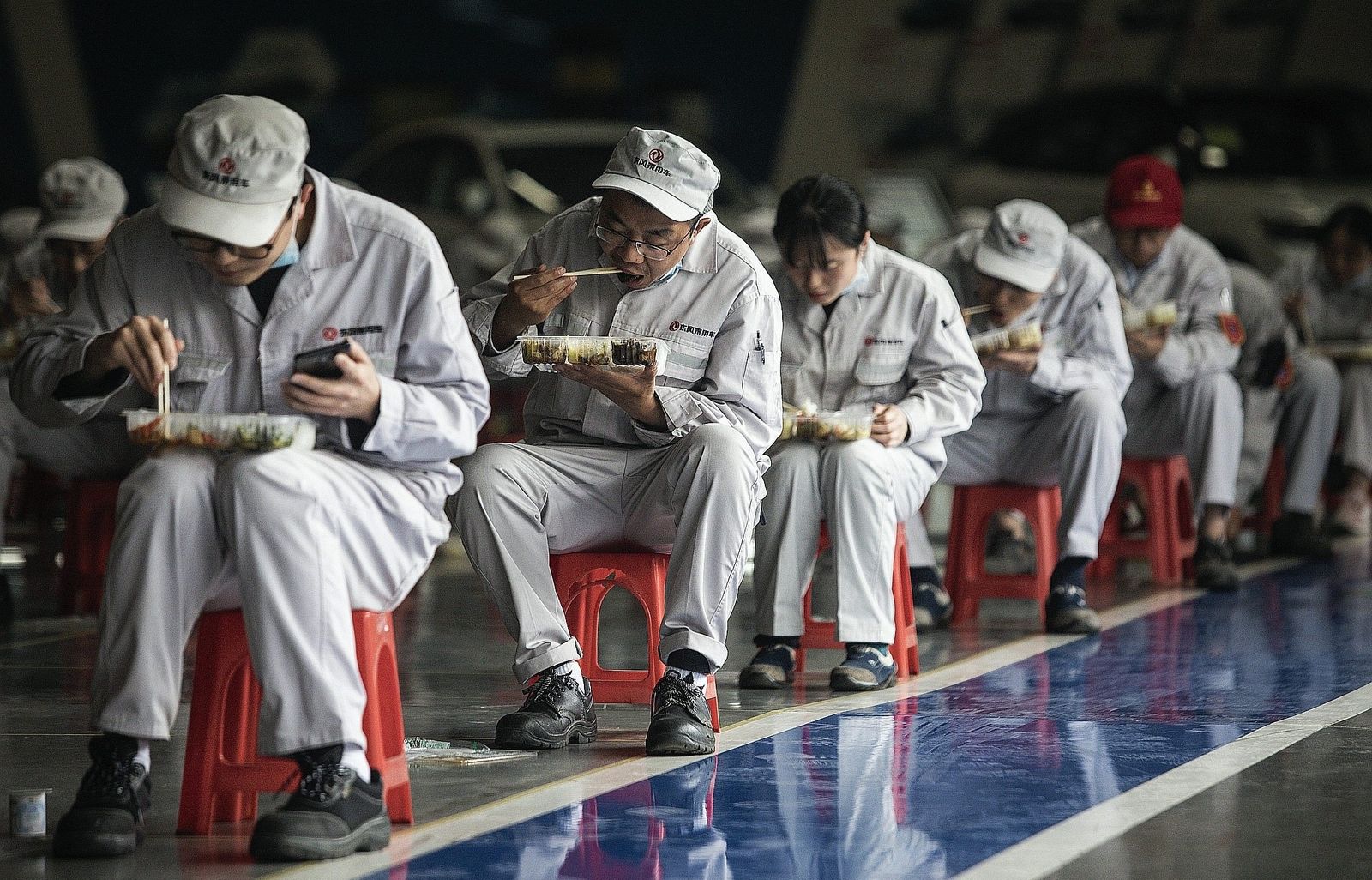 Workers at a factory in Wuhan eat lunch at a safe distance from one another.