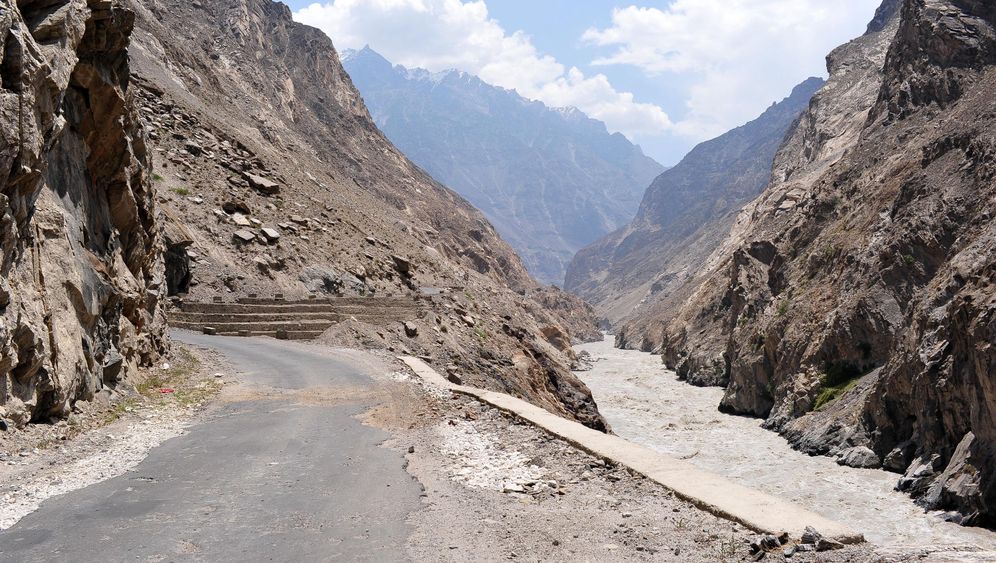 The road roller struggles up the mountain, tar steaming in the heat. Several Chinese and Pakistani workers stand there, leaning on their shovels and observing how their boss, Mr. Li, operates the yellow machine. A few meters on, he stops and jumps out on the unpaved side of the road, directly before a chasm about 1,000-meters (3,300-feet) deep. Seemingly unfazed by the elevation, he nods to his workers and calls out: "That's how it's done. Any questions?"

Whether its high-rises, ports or streets, China is building -- worldwide and on a grand scale. The expansion of the famed Karakoram Highway from China to Pakistan, a part of the Silk Road trade routes, is just one of China's massive construction projects and an example of Beijing's strategy for the future -- investing a lot and giving generously in exchange for long-term benefits.

The almost 1,300-kilometer (800-mile) long path, which runs from Kashgar in western China's Uighur Autonomous Region almost to the Pakistani capital Islamabad, is set to be transformed from a dusty, bumpy road into a modern mountain highway. The section on the Chinese side is already finished. "For Beijing, it's about being able to export more goods to Pakistan, through the ports of Karachi and around the world," says China expert Fazal ur-Rehman of the Institute of Strategic Studies in Islamabad. Plans also include a future pipeline that runs along the Karakoram Highway, allowing China to bring in Iranian gas.

But government circles in India, China's rival in Asia, are concerned that after the expansion China will also be able to transport tanks and other heavy military equipment to the Indian Ocean. After all, China already showed its aggressive potential when it marched into Tibet in 1950, and a few years later when it occupied other parts of the region.

Engineer Li is still standing by the precipice near the town of Karimabad in the Hunza Valley. Below rushes the Hunza River, which joins the Indus River further south. "We Chinese are always suspected of having bad intentions," says Li, and laughs. "Doesn't that say more about those who make such insinuations than us?"

He's surrounded by Pakistani police, armed with machine guns, who keep watch over the Chinese laborers wherever they work. Under no circumstance can one of them be attacked or kidnapped, which could prompt the Chinese to stop the project over security concerns. Even photos of the Chinese are not allowed.

Li says that the highway is about getting a "reliable connection" between China and Pakistan, a road that's passable year-round and could even handle trucks with 40-foot containers. Currently, the Karakoram Highway is closed in the winter because snow plows don't work on the uneven surface. And in many places trucks with 20-foot containers still have trouble negotiating the curves.

With spectacular views of giant peaks such as Nanga Parbat and K2, the route for the highest highway in the world was blasted through the mountains during the 1960s and 1970s. Before that, the area was only traversed on dirt tracks by people on donkeys.

The road passes through the Karakoram, the Hindu Kush, the Himalayas, and long stretches of the Indus River. Along the way there are more than a hundred bridges. Policemen or military personnel also stand watch at these points along the way to ensure that no one takes pictures -- the bridges are considered strategically important targets and, as a result, they rarely show up on maps.

The first incarnation of the enormous project was also a gift from the Chinese to their southern neighbor Pakistan. Beijing financed the project and it was implemented under the Chinese supervision of some 15,000 Pakistani workers, mostly soldiers, and up to 20,000 Chinese workers. According to official figures, more than 800 Pakistanis and 82 Chinese were killed, though there were probably even more unreported Chinese victims among the dead. Many died during blasts and others plunged to their deaths in deep gorges.

Despite being called a "highway," the road -- which reaches its highest point of 4,700 meters at the Khunjerab Pass on the border between China and Pakistan -- has mostly been gravel up until now. In the past 15 years, some sections have been paved, but they've remained only one lane wide, places where trucks push past each other at dizzying heights.

The current plans for uninterrupted pavement and widening the road to two, or in some places even four lanes, are yet another gift from China to Pakistan. The expansion will cost about $400 million, which is being financed by the Chinese government through state banks. "When we are done, the journey from the border to Islamabad will last only 20 instead of 30 hours," says Li.

Originally that was to be achieved by 2013 at the latest, but then came a violent landslide north of Karimabad. The crumbling mountain buried many villages and created an artificial lake that put some 22 kilometers of road under water. "Anyone who wants to cross from Pakistan to China or vice versa by land must change here on a boat," says Li, adding that there are no other routes and even cargo must be loaded onto boats.

The Chinese have summarily decided to drill a tunnel to bypass the newly created Attabad Lake, now a tourist attraction. "It will now take another few years," says Li.

Undeterred by the challenge, the Chinese hauled in heavy equipment. And where bricks were needed to protect the road with walls against landslides or falling rocks, brickworks were swiftly built on site. "Where protective walls were of no use, we built a tunnel," says Li.

Kilometer by kilometer, a monument to Chinese foreign economic policy is being erected. Beijing doesn't worry about the short-term rates of return for its building projects abroad, but on the long-term trade options that they open up instead. The country is also interested in gaining allies with its generous help. In many countries besides Pakistan, Chinese engineers are working on key infrastructure projects. And often the Chinese are also investing in exactly the places from which the West has long since retreated -- such as many African countries rich in natural resources.

The Pakistanis are amazed by the knowledge of the Chinese and are learning from their building practices. But one section of the freshly paved road had to be torn up because the Pakistani workers simply spread it on the flat rolled gravel. Li says that he had to teach them that a road surface must consist of several layers, especially in regions where temperatures can get as low as minues 40 degrees Celsius (minus 40 degrees Fahrenheit) in the winter and up to 40 degrees (104 degrees) in the summer.