An interview? Or perhaps just a discussion on background? "We have no interest in speaking with you," Liao Liang writes in an email. And, thank you for understanding, but a visit to his television broadcaster in Nairobi isn't possible either, he writes. Indeed, the rejection is so complete, it's as though he is protecting a state secret.

Yet Liao Liang's mission in the Kenyan capital is hardly confidential: As a senior editor of the China Global Television Network (CGTN), a subsidiary of Chinese state television, his task is that of shining a positive light on his country's ambitious activities -- particularly those in Africa, where China's reputation has suffered as its footprint has grown.

The broadcaster occupies three floors in the K-Rep Centre, a mirrored-glass high-rise in the upscale neighborhood of Kilimani. The first security check comes right at the building entrance, including a pat-down and questions from the suspicious receptionist. After that, though, there's no getting by the next receptionist on the third floor. "To be honest," she says with fake regret, "there is no chance you'll be allowed to see Mr. Liao."

Liao Liang is top dog at the broadcaster. He was allegedly an army officer in a previous life, but little else is known about him. CGTN employs around 150 people, including journalists from China, South Africa, Britain, Nigeria and Kenya, yet even when promised anonymity, nobody initially agreed to speak with DER SPIEGEL. "They're afraid of Liao," an employee would later say.

"Tell China's story well," instructed Chinese President Xi Jinping three years ago when he visited the broadcaster's headquarters in Beijing. CGTN journalists aren't just there to ward off criticism of China's expansion in Africa but also to break the West's media dominance. The broadcaster has a similar mission in Africa as Russia's state broadcaster RT does in Europe.

A New Form of Colonialism

In the last two decades, China has developed into Africa's strongest economic partner, with an annual trade volume of far more than $200 billion, a total that is much higher than Africa's trade with the United States or with former colonial powers like France and the United Kingdom. And China's foothold in the region goes beyond goods and services. Two years ago, the country established a naval base in the East African country of Djibouti. And it is thought that over a million Chinese now call Africa home. In many countries, they are seen as conquerors who aren't just interested in natural resources and new markets, but also in permanently settling there. According to one survey, the majority of Africans welcome the Chinese involvement, but critics, such as the Senegalese author Adama Gaye, have warned of a new form of colonialism.

In order to burnish its image, Beijing has turned to instruments of soft power. China has thrown its support behind diplomatic initiatives and has contributed around 2,500 troops to UN peacekeeping missions in Congo, South Sudan and Mali. China is also helping with efforts to combat the Ebola epidemic and it even funded the construction of the African Union headquarters in Addis Ababa. The country has also established 49 Confucius Institutes across the continent, which promote the Chinese language and culture.

At the heart of China's Going Out policy is a media offensive launched in March 2018, an initiative coordinated by the broadcast group Voice of China and carefully monitored by Communist Party censors. In addition, the state-run news agency Xinhua was expanded and now claims to be the largest news wire in the world.

The campaign has been pursued particularly energetically in Africa, a part of the world that China believes has a bright future. Every year, 1,000 African journalists take part in training programs in China and Chinese investors have been investing heavily in African media outlets. The TV station StarTimes now broadcasts its paid offerings in 30 African countries and declares itself to be the most influential digital channel on the continent.

For CGTN, its Nairobi offices are one of its largest subsidiaries outside of China and it is the only television station in the world that broadcasts in all six official UN languages. It has 79 million Facebook followers, which is roughly as many as the BBC and CNN combined.

CGTN claims to be independent. On billboards in Kenya, it uses the Swahili slogan "mtazamo tofanti," or "see the difference." The station also insists that it is both open and transparent, but its headquarters are as well-guarded as the Forbidden City in Beijing used to be. After several attempts at finding someone to talk to, one employee finally agrees to meet at a neutral site. Out of fear of being identified, he doesn't even want the color of his shirt to be mentioned. He asks that he be named James M. for this story.

James M. isn't particularly complimentary of his employer. "It's an apartheid system," he says, with the Chinese at the top, then the whites, then the blacks and at the very bottom are the Kenyans. "We have to let the Chinese go first in the restrooms and we're only allowed to eat in the cafeteria after 1 p.m., after they have eaten. They treat us like their inferiors." Sometimes, James M. says, he only receives half of his contractual editor's salary of 2,000 euros per month. He says he is penalized 2,000 shillings - around 17 euros - for every mistake in his stories, including typos.

He is particularly bothered by the fact that at CGTN, as he claims, he has had to abandon his journalistic integrity. He says he continues working there because of the lack of alternatives. "We don't produce independent journalism, but pure propaganda by order of the Communist Party." He says the goal is that of presenting the most harmonious image possible of China's activities in Africa, including construction sites full of smiling workers and positive coverage of massive endeavors like dams and other mega-projects along with humanitarian aid contributions.

James M. says he sometimes feels like a news footsoldier who merely fulfills the orders given by Commander Liao Liang. He shows a text message that he recently received from the boss: "No reports on the chaos!" The reference was to political disturbances in a country in Africa.

The unhappy journalist also says that particularly sensitive texts have to be reviewed in Beijing and if the censors disapprove, the stories are killed. "Criticism of the government, human rights issues or analysis of the growing amount of African debt held by the Chinese are all taboo," James M. says.

At the last three China-Africa summits, loans, grants and project funding worth $140 billion were promised by Beijing, but nobody knows how much of that actually arrived in the countries expecting the funding. What is clear, though, is that some countries are beginning to struggle under the debt load. One example is Kenya, which built an ultra-modern train line from Nairobi to Mombasa with Chinese assistance and is now heavily indebted. "I would be fired immediately if I were to report on such a thing," says James M.

It wouldn't be a first. In September, the journalist Azad Essa reported on China's oppression of the Uighurs, a Muslim minority in China, and was fired afterward. His employer, Independent Media, is the second-largest media outlet in South Africa. And since 2013, a Chinese investor has held a 20-percent stake.

In some Chinese companies that have established themselves in Nairobi, the atmosphere is even more poisoned than at CGTN. Last year, a Chinese motorcycle dealer compared Kenyans to monkeys, with one of his employees, a 26-year-old named Richard Ochieng, recording a video of the moment. The story made it all the way to the frontpage of the New York Times and triggered a storm of indignation in Kenya - in part because it was such a clear example of the prejudices that many Chinese harbor toward Africans. The motorcycle dealer was forced to leave the country and Ochieng found a new job elsewhere.

"An exceptional case. The motorcycle dealer was a fanatic," says Naftali Mwaura. "We have good relations with the Chinese, even if they would rather stick to themselves." Mwaura is a 40-year-old Kenyan reporter who works for the Xinhua news agency and his view of the situation is much less dark. He believes that local media outlets poison relations with the Chinese because they don't understand Chinese culture and are still under the influence of British colonial attitudes. Mwaura says China's involvement in Africa is a win-win scenario that helps bring the continent forward. Claims that China is conquering Africa, he says, are just "stupid chatter" from bloggers who are on the payroll of Western embassies. He views his task as that of providing more optimistic coverage to counter such "negativity."

Mwaura says he can write about whatever he wants, but adds that his supervisors ensure that reports are "politically correct," meaning that they reflect the communist worldview. After all, he says, "we are working on behalf of the geopolitical interests of the Chinese state." 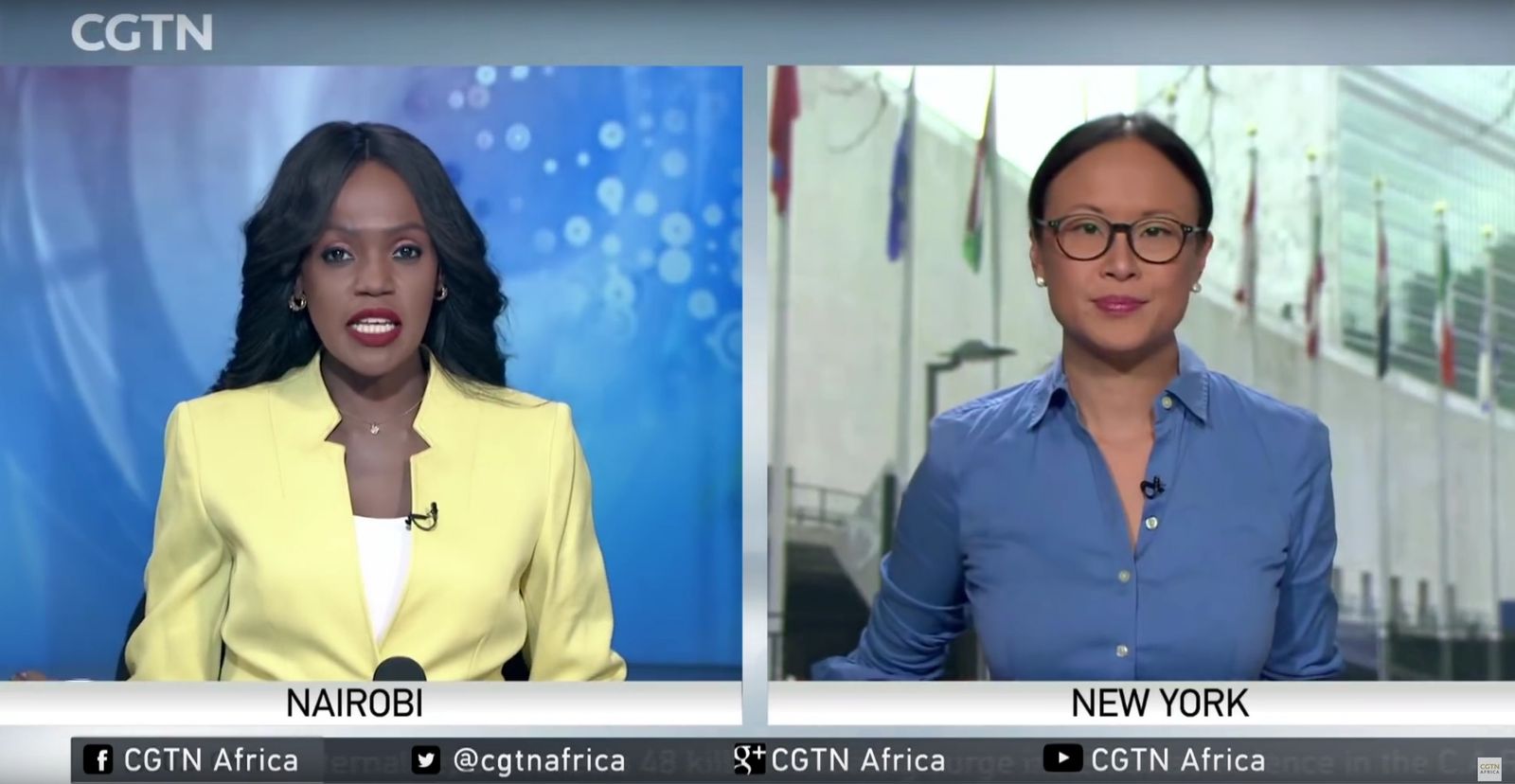 A screenshot of journalists with broadcaster CGTN 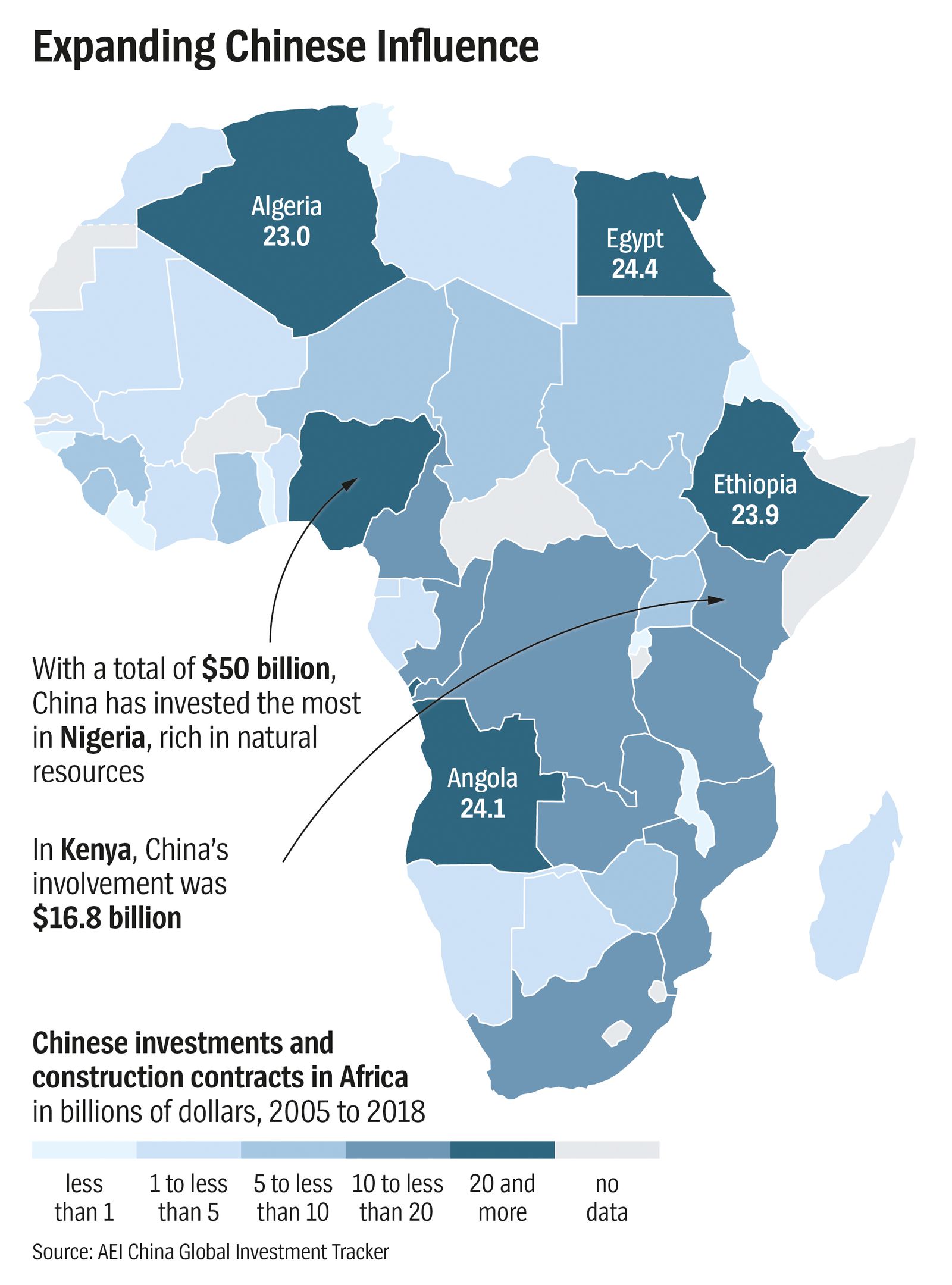