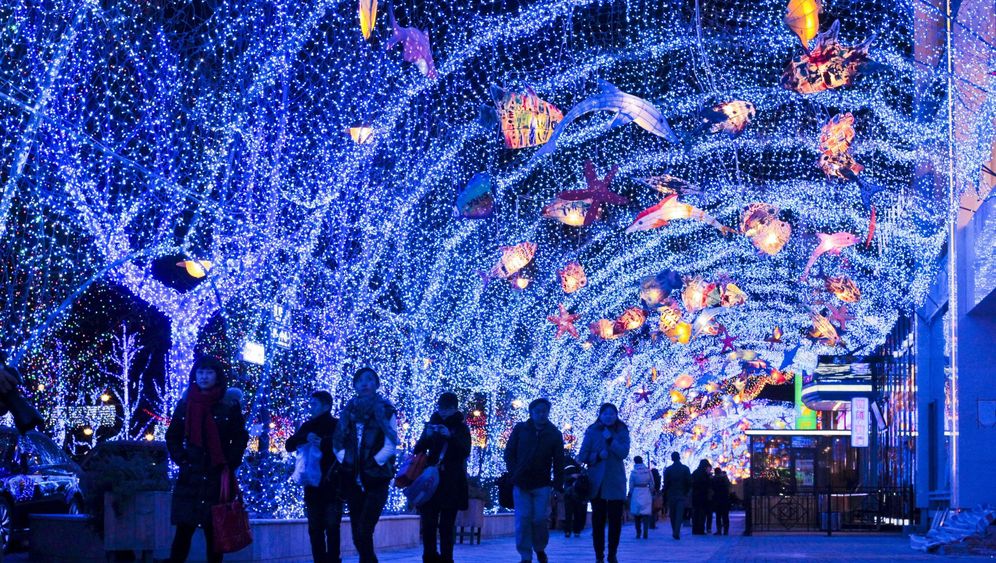 The crowds jostle as they push forward. Men in black uniforms survey the scene as they stand guard. A Communist Party convention? Hardly. Rather, it is the official opening of the first Gap store on Chinese soil.

By 10 a.m., the crowds of people jamming into the store in Shanghai had grown thick. In a building down the street, the German consumer electronics chain Media Markt had also recently opened its first retail outlet in the People's Republic. The expansion plans of its parent company Metro include more than 100 additional stores by the end of 2015.

The arrival of Western chain stores symbolizes the beginning of China's next revolution. The country's rising middle class has embarked on a collective spending spree, at least in the affluent belt along the country's east coast, from Beijing to Shanghai and down to Shenzhen in the south.

China's party leadership is setting an example -- albeit on a much larger scale. Last week, Vice Premier Li Keqiang, seen as a rising star among Beijing's power elite, made a trip to Europe during which he praised German industriousness and discipline as well as the quality of goods "Made in Germany." Li spent three days in Germany alone, and German Economics Minister Rainer Brüderle was undoubtedly pleased with the outcome: orders worth a total of €8.7 billion ($11.4 billion) for Volkswagen, Daimler and other corporations.

A top-ranking communist on a shopping spree. Shortly before his visit to Germany, Li promised the Spaniards that Beijing would buy €6 billion ($8 billion) worth of the troubled country's government bonds. On Friday, he met with German Chancellor Angela Merkel for a meet and greet.

The more than $2.6 trillion (€1.94 trillion) in foreign currency reserves held by China are just waiting to be invested. And Li, acting in Europe as the country's de facto shopper-in-chief, hopes to transform China into a nation of consumers.

China and Hong Kong together are already home to more than 100 billionaires, four times as many as Japan. Attending an annual trade fair in Shanghai, whose high-end luxury goods cater to China's nouveau riche, is more important to them than going to see traditional military parades. Indeed, the party hopes that ostentatious displays of wealth will boost domestic consumption.

The shift is a delight to Western brand-name companies. "Now is precisely the right time for us to enter the Chinese market," says Redmond Yeung, the head of the Gap's operations in China. Yeung plans to open another store in Shanghai and two in Beijing almost simultaneously. Competitors, such as the apparel retailers H&M and C&A, already have outlets in China.

In China, such fashion chains have cultivated a far more upscale image than in their domestic markets. At the new Gap, for example, a pair of limited-edition jeans costs 1,969 yuan (about €225 or $297), almost twice as much as the average monthly salary of a worker in Shanghai. China's new middle class is prepared to pay even more for foreign brands than consumers in the West.

This also holds true for Zhang Lizhong, 29, and his wife Xu Bingqin, 26, both of whom work for a consulting firm. It is Saturday morning in Shanghai, and they are sitting on the sofa in their condominium. While he types something into his smartphone, she runs to gets her iPad. They are making plans for a weekend of shopping and going to restaurants, the two most popular leisure activities in China. Four of the world's 10 largest shopping centers are on Chinese soil.

"Well-known brands are very important to us when we shop," says Zhang. "They stand for quality."

Instead of emulating their parents' generation and working long hours to produce cheap goods for Western consumers, he and his wife want to enjoy their newfound prosperity. China is becoming a promising market for Western corporations, particularly in light of the warm welcome they often receive from government economic planners. Consumption has become an acceptable form of patriotism. International experience, Vice Premier Li says, teaches us that "any major power's development process must be led by domestic demand."

To strengthen purchasing power -- and following a series of suicides among workers at Foxconn, a supplier to the American technology giant Apple -- Chinese leaders have even allowed workers in many plants to strike for higher wages. In its next five-year plan, Beijing plans for the first time to assign its highest priority to consumption as an engine of growth.

Whether or not the strategy works will depend, in part, on how well the government gets inflation under control. But either way, affluent urban residents like Zhang and his wife Xu are hardly deterred by higher prices. Indeed, Beijing, it would seem, would like their next major purchase to be a car. Since the global financial crisis began, the government has stimulated car-buying by reducing taxes. The Volkswagen Group alone sold more than 1.9 million cars in China last year, a 37 percent increase over the previous year. Although Beijing's city government has put a cap on the number of new vehicle registrations it allows, it represents but a minor hurdle in the large-scale plan to boost consumption.

For many Chinese, owning a car is the second most important status symbol after buying an apartment. "I would rather weep in a BMW than smile on a bicycle," a candidate on a popular TV dating show said recently when describing her ideal husband. The episode gave rise to a new term on the Internet, "BMW woman," a reference to this particular type of materialistic Chinese woman.

Still, Zhang does know his limits. "As soon as we have a child," he says, "we will have to start a strict savings plan." Shanghai residents spend more money on their children's education than on anything else.

Meanwhile, the roughly 700 million residents of China's rural areas face completely different problems. Traditionally, they have saved much of their income for times of illness and old age. But now the party has launched campaigns to turn frugal farmers into consumers by encouraging them to buy television sets, refrigerators and computers.

Officials throughout the country are promoting the construction of giant, amusement park-like shopping centers to serve as temples of the new consumer religion. Wuhan, a city of 9 million, also aspires to win global fame from its malls. The most upscale of these complexes is the Wuhan International Plaza, and -- like a promise of things to come -- it rises up out of the smog that envelops this iron-and-steel-producing city almost year-round.

"Many citizens of our city cannot afford the products that are on display, at least not yet," says one saleswoman there with a shy smile. "I can't afford them either." Most customers are high-ranking officials or business executives. "When they go shopping," she adds, "they spend 10,000 yuan or more, all in one go" -- more than she makes in an entire year. 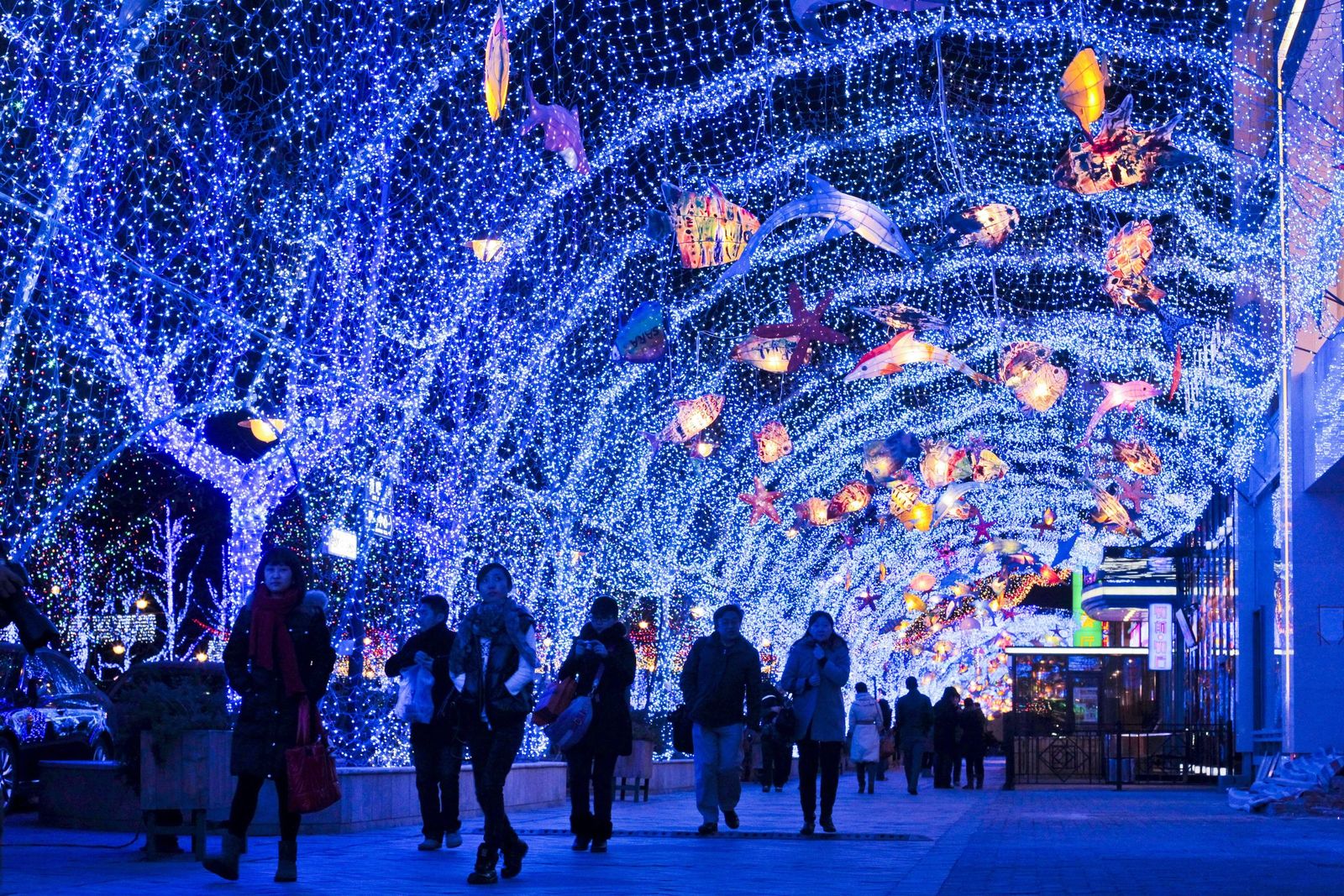 The Chinese middle class is growing rapidly and the government has begun focusing on domestic consumption as a motor of economic growth. The result has been a boom in the construction of shopping malls in China, like this one in Beijing, which was lit up prior to Christmas. 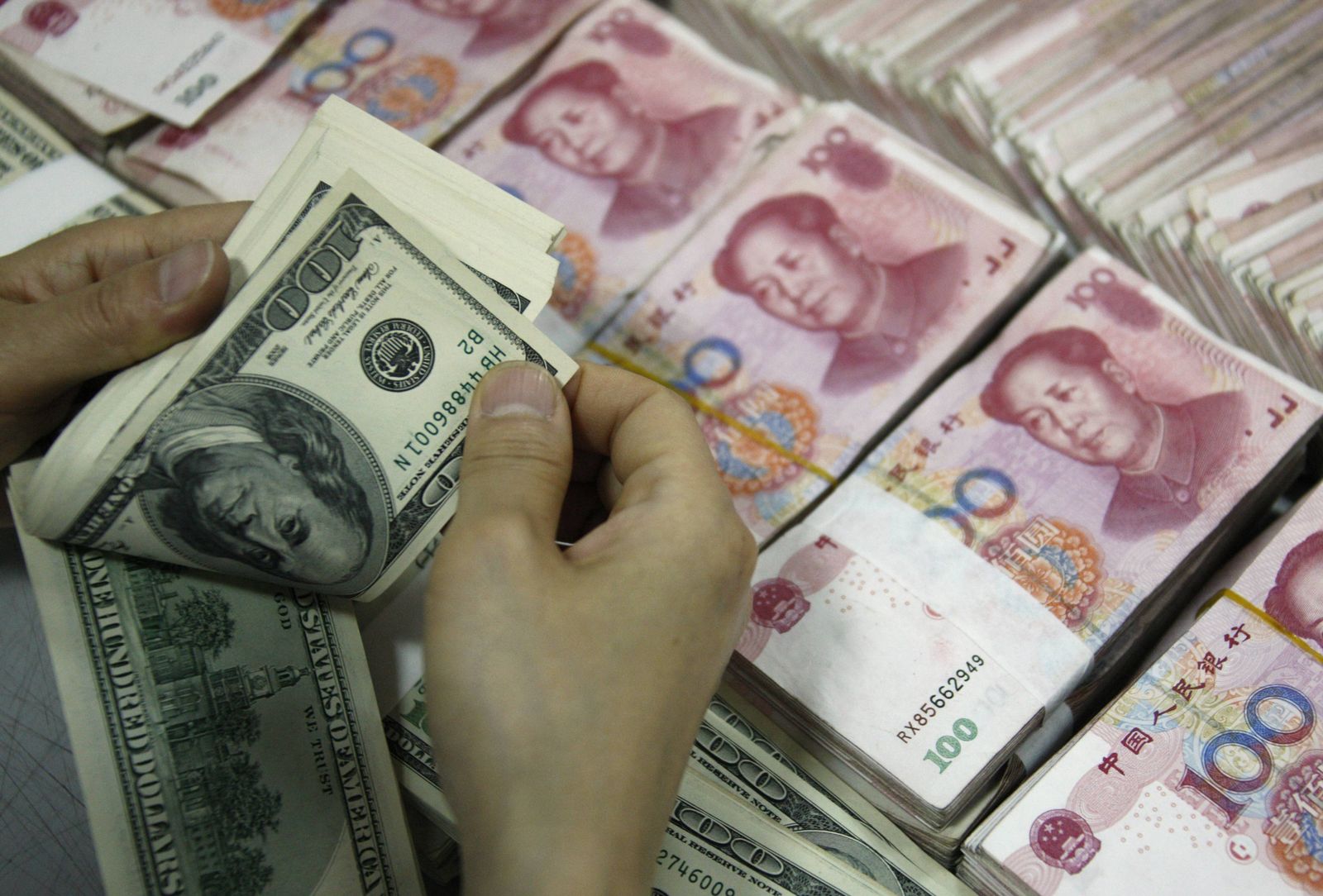 China holds more than $2.6 trillion in foreign currency reserves. The country's government has also gone on an overseas shopping trip and has invested significant sums in troubled European bonds.