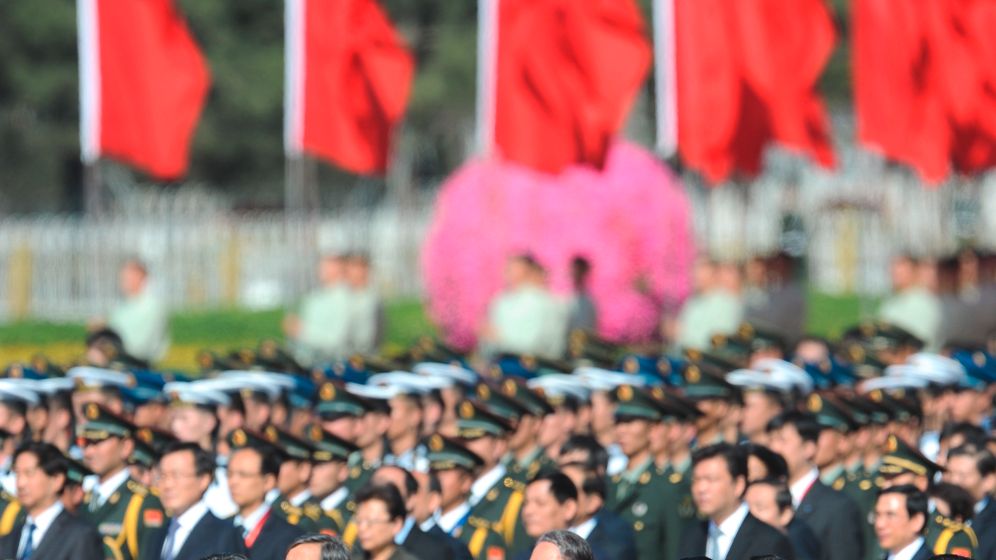 The 7 p.m. news isn't one of the best parts of Chinese state television. Two newscasters, a man and a woman, stiffly rattle off the achievements of the nine members of the Politburo Standing Committee of the Communist Party of China, including stories about the model companies they have visited and the mines they have toured. They read off the names of the workers who have received awards from the party leaders, and of the state guests being received by leaders in Beijing.

Still, last week, many Chinese paid close attention to the evening propaganda ritual, searching for signs indicating which of China's leaders are still in power in Beijing.

There had been rumors and speculation about a possible coup, prompting many to wonder whether President and party leader Hu Jintao and Premier Wen Jiabao would even appear on the screen. Or would the newscast suddenly show other top officials?

The rest of the world, alarmed by reports from bloggers, also looked to China with concern. The country has enjoyed enviable successes for the last three decades. It has become the world's second-largest economy, it now has the largest foreign currency reserves (about $3.2 trillion, or €2.4 trillion) and it controls the most dynamic growth market in the world -- and one that German industries are increasingly dependent on.

Some Western businesspeople have even come to believe that the Chinese economic miracle is proof of the superiority of its authoritarian system. They have raved that the Chinese -- unlike their counterparts in the West -- don't waste time in endless debates but, instead, make quick and clear decisions, thereby enabling them to govern more efficiently. And hasn't it been true, they have argued, that the top political players are selected much more carefully and are not brought into senior government positions until they have proven their worth in the provinces?

It certainly seemed that way. But, in reality, China's communist leaders have been embroiled in bitter power struggles for weeks, the details of which are only gradually reaching the outside world.

It is also becoming clear that the supposed competitive advantages of the Chinese one-party dictatorship -- with no freely elected parliament, no independent judiciary, no meddlesome press -- could become the biggest threat to the stability of this country of 1.3 billion people.

Rumors of a Coup

Last week's uncertainty was triggered by rumors of a coup, which appeared online on the night of Monday, March 19, via the migroblogging website Sina Weibo, the Chinese version of Twitter. Although government censors quickly deleted the messages, they had already been rapidly disseminated.

Bloggers reported that gunshots had been heard on the edge of Zhongnanhai, the downtown Beijing neighborhood surrounded by high walls in which Chinese leaders live and work. They also described sightings of military vehicles on Changan Avenue, the long parade route along the Forbidden City and the Great Hall of the People.

Life seemed to be proceeding normally in Beijing, and many of the photos posted online of allegedly sighted tanks subsequently turned out to be old. Nevertheless, a state of emergency prevailed on the Internet in China. For instance, anyone searching for key words or phrases, such as "gunfire" or "Changan Avenue," got the following message: "These terms are not being displayed in accordance with the applicable laws, regulations and political guidelines."

Still, in posting these statements, the censors merely fueled additional speculation over what was happening in the government district. According to websites run by Chinese exiles, Zhou Yongkang, 69, a leading Poliburo official in charge of the police and judiciary, had been neutralized by his rival, party leader Hu, who enjoys the support of the military.

The security chief was mentioned in the TV news on Thursday, but it was unusually brief and without a photo. Like so many things in Beijing, his future has seemed uncertain.

The Chinese capital hasn't experienced a power struggle like the one now underway since the bloody suppression of the democracy movement in Tiananmen Square in 1989. At the time, there were also deep divisions within the country's communist leadership.

The current showdown threatens to jeopardize the carefully planned change in the party and national leadership. Chinese Vice President Xi Jinping, 58, is expected to succeed Hu as party leader in the fall and replace him as president in March 2013.

The shake-up had been prepared for so long that it didn't seem to be in jeopardy. On the other hand, China's communists have only managed to achieve a smooth transition of power once since the death of Chairman Mao Zedong in 1976. That was in 2002, when the current Communist Party leader took office.

This fall, however, seven of the nine positions on the Politburo Standing Committee are to be filled with new people. This is almost more important than the presidential succession because it is this committee that ultimately sets the agenda in China. Even the president and party leader has to negotiate compromises within the committee.

Seeking to Avoid a 'Historical Tragedy'

The tussle over the replacement of the seven members has been going on for months. On March 15, one of the most promising candidates for a top post withdrew, albeit involuntarily. The Beijing leadership deposed Bo Xilai, 62, the popular party chairman in Chongqing, a city of 32 million on the Yangtze River in central China.

The ambitious and charismatic Bo's fall from grace came as a surprise because he is considered a "princeling." His father became one of China's "immortal" revolutionaries after making a name for himself fighting the Japanese. His son Bo encouraged the citizens of Chongqing to revive the custom of singing revolutionary songs in the city's parks. He had thousands of corrupt officials and underworld figures arrested. And he helped the poor by forgiving their school fees and providing them with inexpensive apartments.

Conservatives in the Communist Party applauded Bo, believing that he could resolve the contradictions of communist state capitalism, especially widespread corruption and the growing chasm between the rich and the poor.

But moderate reformers, such as Premier Wen Jiabao, saw the Chongqing-based populist as a new Mao, a dictator who could threaten them and their families' business interests. Speaking on the day before Bo was deposed, Wen said that China had reached a "critical stage." "Without a successful political structural reform, it is impossible for us to fully institute economic structural reform, and the gains we have made in this area may be lost," Wen said. In fact, he added that, if China could not get to the root of its problems, it might experience another "historical tragedy like the Cultural Revolution."

The assessment by a Chinese academic in a US diplomatic cable that was disclosed by WikiLeaks in 2010 shows how deeply Bo had alarmed the party bosses in Beijing. According to the academic, in an effort to make himself politically unassailable, Bo had even denounced his own father during the Cultural Revolution. As the professor stated in his assessment, since the Chinese value family ties above all else, many viewed Bo as a "base traitor."

In addition to quarreling over positions, Beijing's leaders are also at odds over the future positioning of the superpower. Should China be more "revolutionary" again -- that is, more directed from above -- as Bo demonstrated in Chongqing? Or should the party embark on reforms leading in the direction of a constitutional state, as the southern province of Guangdong, a key center of the country's export industries, is currently practicing with the support of party leader Hu and Premier Wen?

Although personal and political issues are difficult to separate in this power struggle, a public contest to determine the best arguments has so far been avoided. Instead, Hu, Wen and their supporters employed a tried-and-true method for eliminating the upstart from Chongqing: corruption charges.

An incident in early February provided the necessary excuse. At the time, Wang Lijun, Bo's recently demoted vice-mayor and police chief, had fled to the US Consulate in Chengdu because he allegedly wanted to seek asylum. But the effort fizzled, and he only stayed in the consulate for a single day. The former official is now being questioned in Beijing, where he has reportedly provided authorities with incriminating material about Bo and his family.

Whether the ousted "princeling" will be put on trial or relegated to a more minor position within the party was still unclear last Friday. Bo has powerful allies in Beijing, including Zhou Yongkang, the chief of security in the Politburo who, according to rumors among Chinese bloggers, has now been deposed. To fool the Internet censors, net activists have made a code name out of the last character in his name. They refer to him as "Kang Shifu," the name of a Chinese brand of instant noodles.

Trusting the Internet More than the State

And what is Xi Jinping saying, the man who -- at least at the moment -- is in line to become the next party leader and president? He has remained tight-lipped on where he intends to take China. Such is consistent with the approach he has used to climb to the top of the party: not attracting attention and not making enemies.

Granted, this is a recipe that has proven effective in the past, as was also the case with censorship. But how effective is this approach today, when an alternative to the government's propaganda -- and one accessible to millions of Chinese -- has taken shape on the Internet? And when there are two versions of the truth?

The most recent events must even give a man like Xi pause. The Communist Party is beginning to have trouble maintaining secrecy on issues of personnel and power. Too much information is leaked, and it rapidly spreads online.

Meanwhile, the party remains silent, which only fuels additional speculation. Even when Zhou was shown on television on Friday, many bloggers were unimpressed: "It's all an illusion, full of twists and turns," one blogger wrote.

Indeed, many Chinese have become so cynical that they don't even trust the party media, such as state-run television, when they actually are telling the truth. But they do believe every rumor on the Internet.

Perhaps that was why they still didn't know, at the end of last week, what was actually happening in their country.