Almost everything went according to plan. German Chancellor Angela Merkel hosted her guest, Chinese Premier Wen Jiabao, at a dinner on the shore of Lake Wannsee on Monday evening and on Tuesday morning, she, Economics Minister Philipp Rösler and Wen spoke before an economics forum at the Hotel Maritim in Berlin. Immediately afterwards came the joint cabinet meeting in the Chancellery.

It was the first time ever that Germany and China had held such a government consultation. But it seemed routine nonetheless.

Indeed, it was only later, at the subsequent press conference, that the choreography experienced a brief hiccup. Progress has been made, Merkel said, when it comes to intellectual property rights. But when it comes to other issues, she went on, such as the rule of law, there are still "large distances" that have to be covered.

"I also want to say," Merkel continued, "that we are pleased to note the release of ..." Just at that moment, Wen's headphones gave out. It was unintentional, but Merkel had to repeat her admonishments once Wen was handed a new set of headphones. She repeated her pleasure at the release of the artist Ai WeiWei, Hu Jia and other prisoners and insisted that trials be transparent. She also said that she had asked her guest the night before to ensure appropriate working conditions for German journalists in China.

Such warnings from the West, of course, have become routine, and Wen received them with due seriousness. He responded with the well-worn sentence that both sides should search "more for commonalities than for differences."

Indeed, it was commonalities, particularly when it comes to trade, which served as the primary focus of the Chinese visit. China is continuing to modernize and it needs the help of German technology. The country wants to move away from merely producing cheap products and seeks to focus production in the future on technically advanced goods. Before Merkel and Wen met the press at the Chancellery, the two signed a whole series of contracts -- 14 in total. Among them was an agreement for China to be the partner country for the Hannover Messe trade show in 2012 and the construction of a German consulate in the Chinese city of Shenyang. The two sides also pledged to work more closely together on issues of justice, climate control and renewable energies.

In addition, contracts were signed with German companies worth a total of €10.6 billion, including the purchase of 62 Airbus A320 passenger jets. Volkswagen also inked a deal with its Chinese partner FAW on the construction of a new factory in China while Daimler and Siemens also concluded investment deals with their Chinese partners.

German-Chinese relations, of course, have not always been this good. It was just four years ago that Merkel received the Dalai Lama in the Chancellery, angering China and horrifying industrial leaders in Germany. They need not have worried. Despite a period of chill, relations quickly normalized. On Tuesday, Merkel said Wen's visit marks a "new chapter" in the strategic partnership, borrowing the exact words used by her guest.

China and the Euro

The euro crisis was a further topic discussed at the summit. With roughly 26 percent of its currency reserves invested in euro-denominated assets, China has a major interest in seeing the currency remain stable. "If Europe has problems, we will lend a helping hand," Wen Jiabao said. If necessary, he added, China would buy up an appropriate amount of the sovereign bonds of euro-zone countries. Merkel, in turn, assured him that "we will take care of solidarity and solidity in the euro zone."

The summit also addressed foreign policy issues. In March, China and Germany joined Russia in abstaining in the UN Security Council vote to impose a no-fly zone in Libya. The abstention sparked severe criticism of Germany and so far hasn't produced any further common ground between the three nations on foreign policy. For example, while Wen has advocated a peaceful solution in Libya using political means, Merkel has made a point of supporting the legitimacy of military engagement. Noting that a majority of the members of the Security Council voted for UN Resolution 1973, she argues that all of the Council's members are now obliged to support its implementation. Merkel also stresses that Germany's status as a member of both NATO and the EU makes these obligations "of utmost importance" to Germans.

The differences don't end there: China is not only opposed to the international criminal indictment against Libyan ruler Moammar Gadhafi, but also to the UN resolution against the regime in Syria that Berlin had a hand in drafting.

Merkel played down this raft of differences. A Chinese journalist even succeeded in wringing a confession out of her. "I have always loved to visit China, and I will continue to do so in the future," the chancellor said. 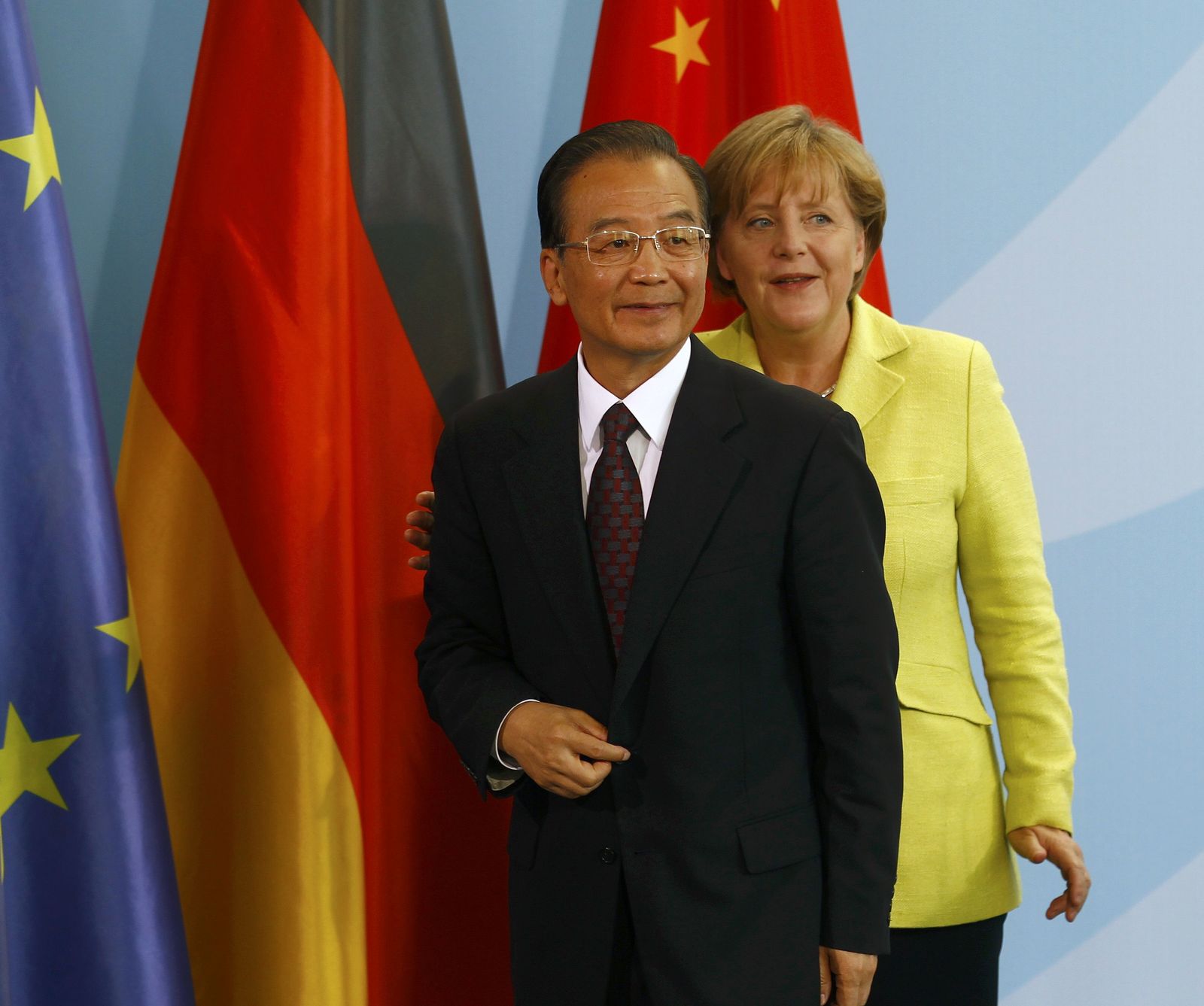 Chinese Premier Wen Jiabao was in Berlin on Tuesday for consultations with Chancellor Angela Merkel.