The current emergency in Ukraine -- on this everyone seems to agree -- is rich in historical resonances. But which histories in particular are pertinent to the recent events? The complexity of the situation in the Ukraine arises precisely from the plurality of quite different historical narratives entangled in it. One thing is clear: the crisis can neither be understood nor solved using a single historic logic.

Exactly one hundred years after the outbreak of World War I, the comparison with 1914 inevitably comes to mind in this anniversary year. In its complexity and swiftness of escalation, the "July Crisis" of 1914 is without parallel in world history. On June 28 of that year, the Austrian heir to the throne and his wife were slain in Sarajevo by Bosnian Serb students acting for a shadowy Belgrade-based ultranationalist network. The Austrian government in Vienna offered its support and resolved to serve an ultimatum on its Serbian neighbor. Berlin promised support for Austria on July 5. Encouraged by Paris, Russia opted to defend its Serbian client by mobilizing against Austria and Germany. Unsatisfied by the Serbian reply to its ultimatum, Austria declared war on Serbia. Russia mobilized against Austria and Germany. Germany first declared war on Russia and then on France. France asked London for help. And, on August 4, 1914, following the German breach of Belgian neutrality, Britain entered the war.

The spectre of that war is useful as a reminder of how terrible the costs can be when politics fails, conversation stops and compromise becomes impossible. But in fact the alignments implicated in the Ukrainian emergency bear little relation to the geopolitical constellations of 1914. At that time, two central powers faced a trio of world empires on Europe's eastern and western peripheries. Today, a broad coalition of Western and Central European states is united in protesting Russia's interventions in Ukraine. And the restless, ambitious German Kaiserreich of 1914 scarcely resembles the European Union, a multi-state peace framework that finds it difficult to project power or to formulate external policy.

The Crimean War of 1853-1856 might offer a better fit. Here, at least, we can speak of a coalition of "Western" states united in opposition to Russian imperial ventures. This war, which ultimately consumed well over half a million lives, began when Russia sent 80,000 troops into the Ottoman-controlled Danubian principalities of Moldavia and Wallachia. Russia argued that it had the right and obligation to act as the guardian of orthodox Christians within the Ottoman Empire, much as it today claims the right to safeguard the interests of ethnic Russians in eastern Ukraine.

But here, too, it would be a mistake to push the analogy too far. In the 1850s, the Western powers feared that Russian predations against the Ottomans would destabilize the entire zone from the Middle East to Central Asia, undermining the security of the British and French world empires. Since the Ottoman Empire no longer exists, the mechanisms of transimperial destabilization are absent in the current crisis, which involves the relationship between Russia and one relatively isolated former client state on its periphery.

An Unruly Dynamic of Revolution

Pushing back further into the past, we can discern more distant precedents: the Russian annexation of the Eastern half of Ukraine after 1654 and its evolution into Cossackdom over the next century and a half, followed by the push south into the Crimea from the reign of Peter the Great onwards. This is the long, slow story of Russian territorial expansion, a process lasting centuries in which Muscovy acquired on average every year an area equivalent in size to modern Holland.

What none of these historical genealogies captures is the unruly dynamic of revolution and civil strife in Ukraine today, a phenomenon that evokes very different precedents. Following the news over the last few weeks, it has been difficult (for historians at least) to ignore the many parallels with the English Civil War of the 1640s. Then as now, an increasingly self-confident parliament confronted a controversial head of state. It was not the office of the king or president as such whose legitimacy was in question, but the conduct of the person discharging it. And just as President Viktor Yanukovych fled to an undisclosed location after the breakdown of order in Kiev, so Charles I, having tried and failed to arrest the ringleaders of the parliamentary opposition, left London for Windsor in 1642, to return seven years later for his trial and execution. In both cases, news of a provincial tumult in support of the beleaguered sovereign (Irish Catholics in the English case, Ukrainian Russians in the Ukrainian) triggered a decisive escalation.

The Ukrainian uprising has naturally tended to monopolize the attention of the European media. For mature Western democracies, the spectacle of tens of thousands of citizens armed only with candles and posters asserting their rights against a corrupt and ruthless regime is the ultimate psychodrama. Nothing better replenishes the charisma of democracy than observing the violent convulsions of its birth.

The difficulty of the current crisis lies precisely in the folding together of these very disparate narratives: civil strife, geopolitical tension and imperial expansion. The arrangements put in place since the collapse of the Soviet Union have added a further layer of complexity.

Meanwhile, the EU has invested deeply in the process of democratization in the Ukraine. The Partnership and Cooperation Agreement signed in 1998 exists to sustain political and economic transformation within the partner state. Ratification of a new "Association Agreement" negotiated in 2007-2011 and incorporating a "deep and comprehensive free trade area" was made conditional upon the implementation of key domestic reform targets.

By contrast, NATO, as the alliance formed to protect Western interests in the Cold War, is focused firmly on the global balance of power, just as the Crimean coalition was in the 1850s. NATO and the EU are not coextensive and not identical in their interests. When the Americans, the Poles and the Baltic states proposed the extension of NATO membership to Georgia and Ukraine in 2008, France and Germany objected, just as Prussia refused to join the anti-Russian Western coalition of 1854-5. Lastly, there is the complex political demography of Ukraine, itself the legacy of centuries of Russian penetration and settlement. The deep ethnic divisions in the country, the jigsaw of autonomous regional "republics" and the special constitutional and military status of the Crimean peninsula make no sense without this history.

Any solution has to take into account the very different imperatives implied by these narratives. Using the Ukraine as a proxy to box the Russians in would be insensitive to the history of the region and will merely lead to further instability. Letting the Russians do whatever they want would merely invite Moscow to use Ukraine as a proxy for pushing the West back -- the war for South Ossetia, which broke out shortly after the decision not to grant Georgia NATO membership -- showed how quick Moscow will be to capitalize on the irresolution of Ukraine's Western partners. Betting the farm on the Ukrainian revolution is risky, given the unpredictability of all such tumults.

What is needed is a composite solution that takes account of all the interests, each with its deep historical hinterland, engaged in the conflict. Are we in danger of "sleepwalking" into a major conflagration?

There exists today no counterpart for the kind of "Balkan inception scenario" that fuelled escalation in 1914. In a recent statement for a news program, German Foreign Minister Frank-Walter Steinmeier conceded that the EU foreign ministers (himself included) had been too quick during the early days of the crisis to engage with the Ukrainian opposition and too slow to take account of the larger geopolitical issues that are entangled with the crisis. This remark exhibited a level of self-critical reflection and a readiness to adjust to new developments that would have been completely alien to his early twentieth-century counterparts. The statement issued by European Commission President José Manuel Barroso on March 5 following a meeting of the Commission to discuss the situation in Ukraine struck exactly the right note. It spoke of the overriding importance of political and economic stability and of respect for the rights of "all Ukrainian citizens and communities." Caution has been a salient feature of US President Barack Obama's recent statements, and even the crude threats emanating from the Kremlin have been in marked contrast (so far!) with President Vladimir Putin's circumspection in practice.

The Ukrainian emergency is a reminder of how quickly events can undo the best-laid plans and produce unforeseen constellations. But all the key players in this drama appear to have grasped one thing: namely that the answers history gives to the questions of the present are multiple and conditional, not singular and absolute.

Christopher Clark, 54, is a professor of Modern European History at the University of Cambridge. His latest book "The Sleepwalkers: How Europe Went to War in 1914," about the outbreak of World War I and the scope of German culpability, is a bestseller.
Mehr lesen über
Russia Ukraine European Union 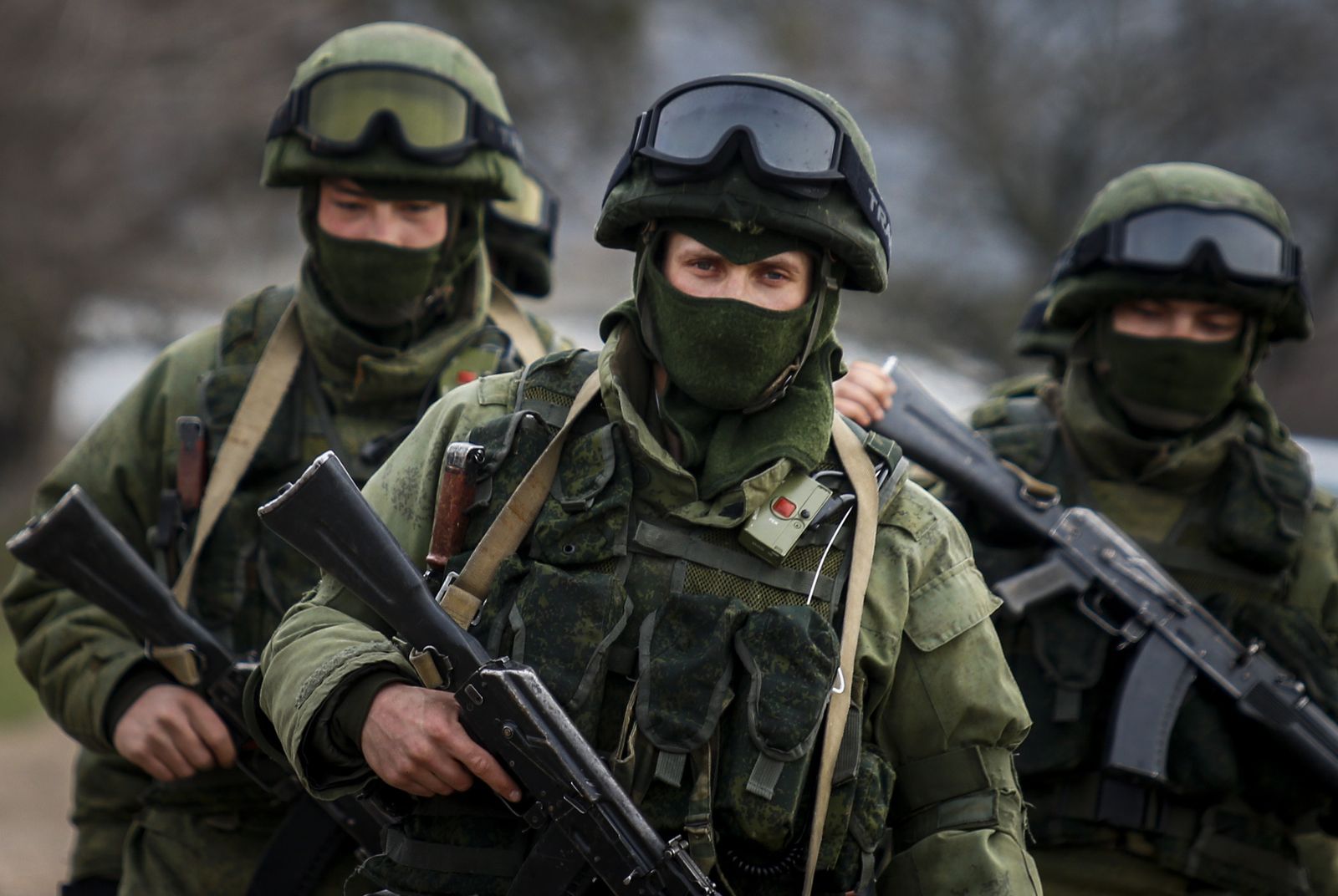 Armed men, believed to be Russian servicemen, march outside a Ukrainian military base in the village of Perevalnoye near the Crimean city of Simferopol.